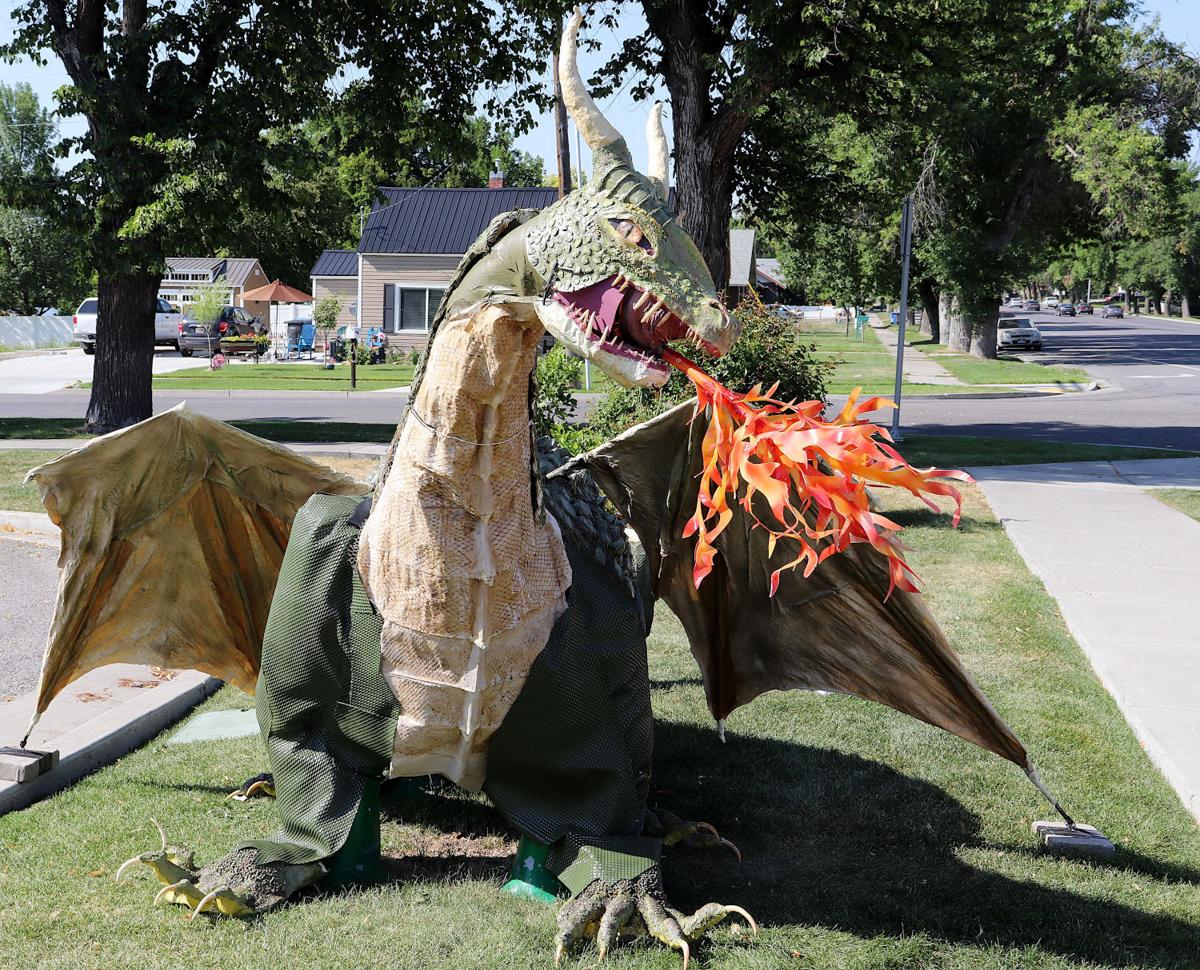 The Sinclair dinosaur mascot in Smithfield has been decorated as a dragon. Community members take turns decorating the mascot to match the seasons, and the dragon is the most elaborate decoration to date. 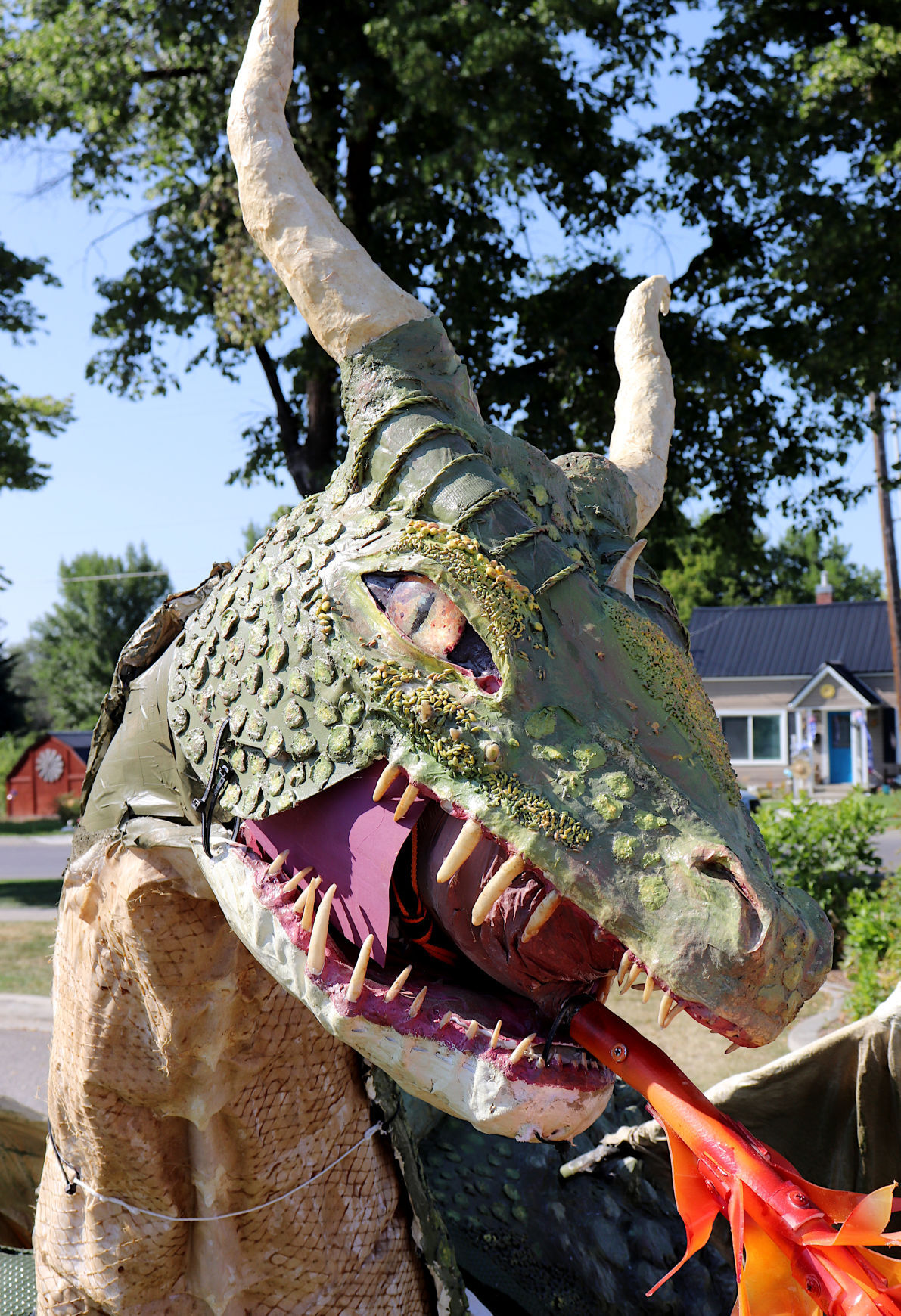 The Sinclair dinosaur mascot in Smithfield has been decorated as a dragon.

The Sinclair dinosaur mascot in Smithfield has been decorated as a dragon. Community members take turns decorating the mascot to match the seasons, and the dragon is the most elaborate decoration to date.

The Sinclair dinosaur mascot in Smithfield has been decorated as a dragon.

The dinosaur statue outside the Summit Creek Sinclair gas station in Smithfield has lived several lives, with residents entering a drawing for a turn to decorate it each month.

This month a Benson couple has created the most ambitious makeover yet, using rebar and paper-mache to transform the dinosaur into a fire-breathing dragon.

“I just wanted to see if we could turn it into a dragon,” Anita Klippert said when asked where the artistic inspiration came from.

Anita and her husband, David Klippert, said they spent about a month and a half designing the dragon, using for a model the identical dino at the Riverside Sinclair in Box Elder County, which is owned by the same people. Unlike the Smithfield sculpture, the Riverside dinosaur is decorated sometimes but not year-round, so the Klipperts could use it to shape the dragon’s structure.

Anita learned new techniques online to create the dragon atop the rebar skeleton.

“I just used old sheets and ripped them up and paper-mached them over those bones,” Anita said. “There’s paper-mache bones on there.”

The spine is made of rings that connect three-pack jars of applesauce. The skin is textured with egg cartons and soda bottles on the body and popcorn kernels and rice on the head and feet.

Anita said she’s very confident in the sturdiness of the end result, however.

“I’m telling you, it’s not going to blow away,” Anita said. “We don’t have to worry about a safety issue. If a hurricane comes, I think that store will blow away before the dragon will.”

The Klipperts were the couple behind a previous year’s popular and elaborate decoration that had Fred Flintstone sliding down the dinosaur’s tail. That design was voted the year’s best, bringing in some extra prize money. If the Klipperts win this year’s $500 annual prize, that and $200 expenses paid by the store will reimburse them for the monetary costs of the dragon — though it likely wouldn’t approach the value of the time spent on the decoration.

“It was just a fun summer project, but I’ll be honest with you — we were sick of it before we were done with it,” Anita said. “It took so much work the last couple of weeks. We were tired.”

Talking to the Klipperts, they repeatedly describe the effort they put into their own project as “crazy” and they occasionally wondered whether it was worth it.

“It was like a month and a half of effort, a lot of money,” David said, “and we’re like, ‘Oh, my gosh. Why did we even do this?’ But the people’s reaction has just been great.”

The Klipperts didn’t set out for a lot of recognition — if they signed their work, it’s not easily visible on the sculpture. They do enjoy reactions from family members and passers-by when they visit the gas station. They saw a lot of the community’s reaction as they were installing the decoration, as well.

“We were there putting it together, and a group stopped, and they had kids, and those kids were really into it,” Anita said. “And the one boy was making sure I had all four feet. He was concerned because one of them was missing — it just wasn’t attached yet. It was great. It’s great to see kids. That’s what’s fun, for sure.”