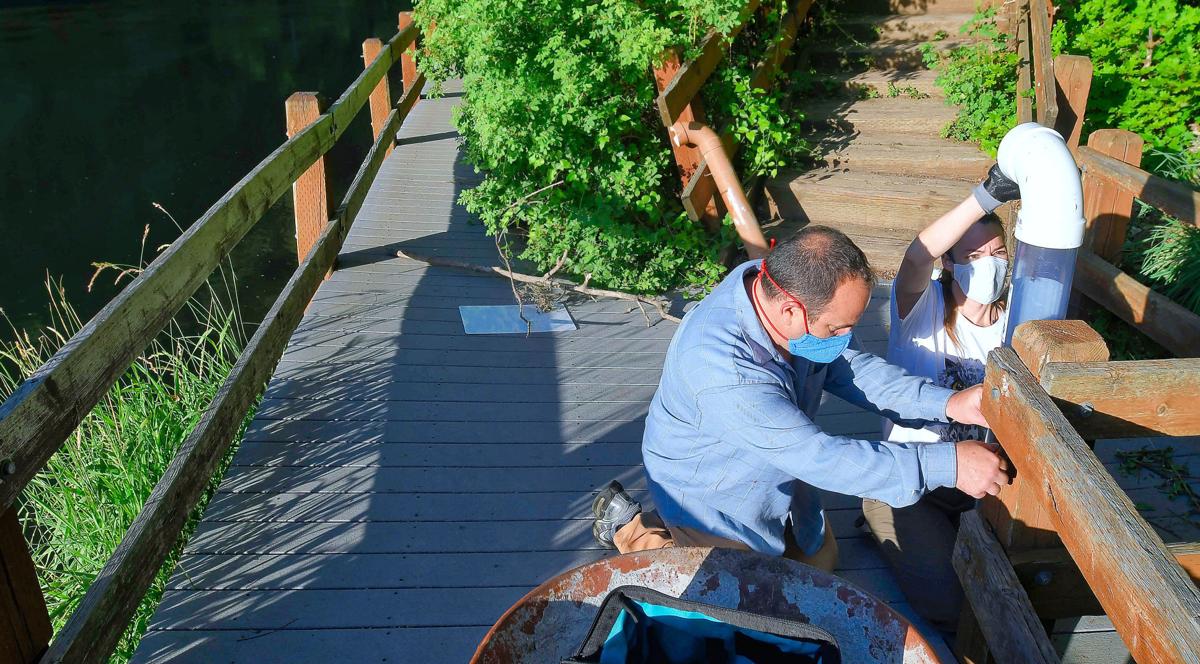 Alan Hochberg, left, and Stevie Koller install a tube to put tangled fishing line into on July 4 at Second Dam. 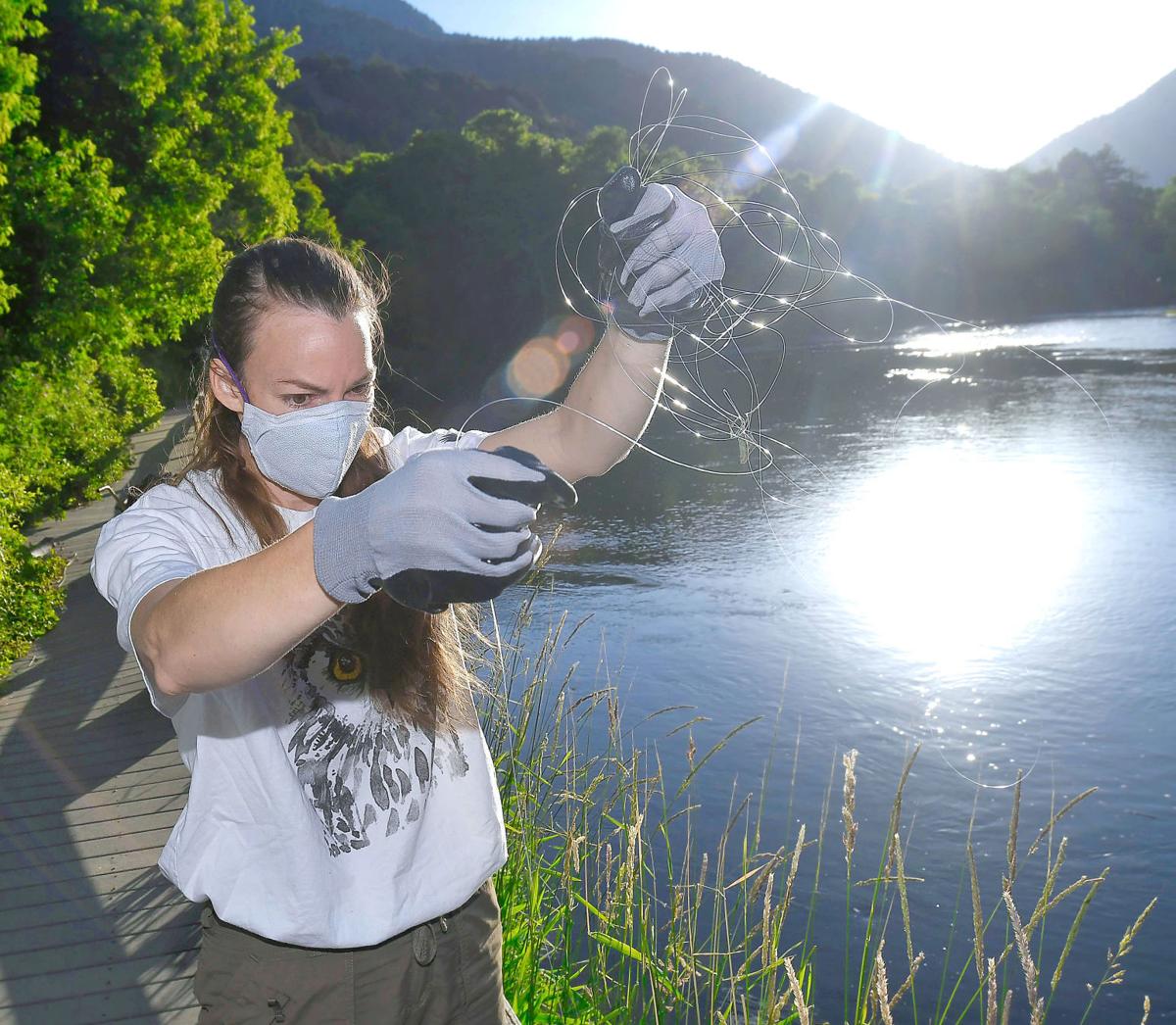 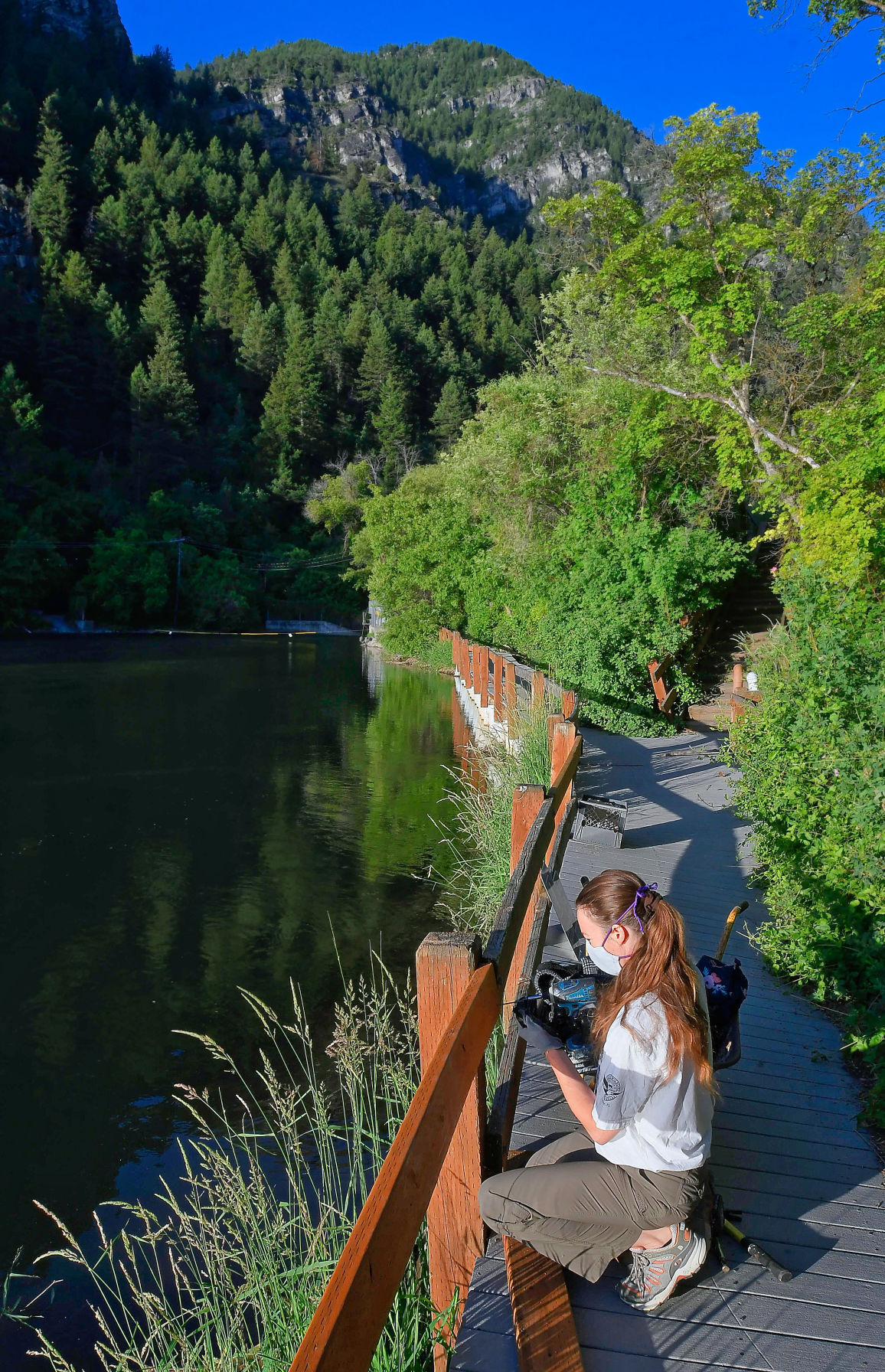 Stevie Koller fixes one of the railings at Second Dam on Saturday.

Alan Hochberg, left, and Stevie Koller install a tube to put tangled fishing line into on July 4 at Second Dam.

Stevie Koller fixes one of the railings at Second Dam on Saturday.

Since the first anti-littering campaigns were launched in the 1950s, much has been done to raise awareness about keeping America’s roadways, waterways and public lands free of refuse. However, one type of litter seems to have persisted through the years largely unabated — maybe because it’s harder to retrieve.

That form of litter is tangled fishing line.

Take a walk along the river in Logan Canyon and it won’t be long before you encounter clusters of monofilament line, along with attached bobbers, lures and other fishing tackle. This is especially true at popular fishing spots like Second Dam.

“Oh my gosh, I went for a walk at Second Dam last summer and was shocked at all the tangled up fishing line I saw,” said recent Utah State University graduate Stevie Koller, who was inspired by that visit and a later trip to Florida to do something about the problem.

In Florida, the environmental studies major noticed fishing line recycling receptacles along beaches and thought the same type of program could be implemented here. The idea got just the push it needed when Koller enrolled in USU professor Roslyn McCann’s “Communicating Sustainability” class and needed a community-engagement project to carry out with fellow students.

“That class is all about how you bring about community awareness, how you change people’s mindsets,” Koller said. “And if there’s nothing indicating that you should do something with your fishing line, most people aren’t going to put it in a container and take it home.”

Abandoned fishing line isn’t just an unsightly addition to the outdoors; it poses a danger to birds and other wildlife.

“It’s not only really bad for birds because they end up getting trapped in it, but they can also pick it up and put it in their nests, or it gets dragged by some animal up into the land,” Koller said. “Even if it goes into the landfill, it can end up blowing away, and that can be really bad. It’s like an invisible noose.”

Koller spoke with the Forest Service and other wildlife officials about the problem statewide and noted, “Although they do see fishing line entanglements increasing, that’s not something that gets out to the public, and that’s not something they have someone in charge of at the moment. Their job is to manage a huge chunk of public land.”

Second Dam has actually had receptacles for discarded fishing line for some time, but they were not clearly identified and many visitors did not know what they were for. More often than not, the cylindrical containers got stuffed with food wrappers and other trash.

The plan put together by the students called for explanatory messaging at each of four new containers at Second Dam along with other anti-littering signage. The new containers are transparent, which should help passersby easily identify their purpose.

In the short term, Koller will collect the fishing line herself and send it to the Berkley Conservation Institute for recycling, but she’s applying for a grant to fund the recycling on an ongoing basis and hopes future students will take up the task.

In working with the city of Logan, which oversees operations at the dam and adjoining picnic area, the students also arranged to do some minor repairs on fencing along the popular boardwalk. Logan Light and Power donated $250 toward the overall effort, Ferguson Plumbing in Logan donated PVC pipe for the fishing line receptacles, and Home Depot supplied lumber for the repairs.

Koller and a helper got out at 6 a.m. on July 4 to accomplish all the work — a job that was originally planned for spring but got delayed by the coronavirus pandemic.

Also affected by the virus was an accompanying on-site event planned by the students that included a Science Unwrapped presentation on fishing-line recycling and casting techniques, plus an organized river trash cleanup. The program was cancelled in early spring, and the scattering of students after USU halted on-campus classes in March left Koller alone to finish the job. Her collaborators were Parker Lewis, Beth Arnold and Kendra Nichols.

“This project was put on hold due to COVID-19 restrictions, but I am glad to complete it today and look forward to continuing communication about sustainability in this watershed to the community in the future,” Koller wrote in a press release sent out on the holiday.

One other element in the community-engagement project was a poster contest on the theme of keeping Second Dam clean, and this went off without a hitch, although participation was not as high as hoped for. Prizes for the winners included a day pass to the Logan Recreation Center and Stokes Nature Center merchandise.