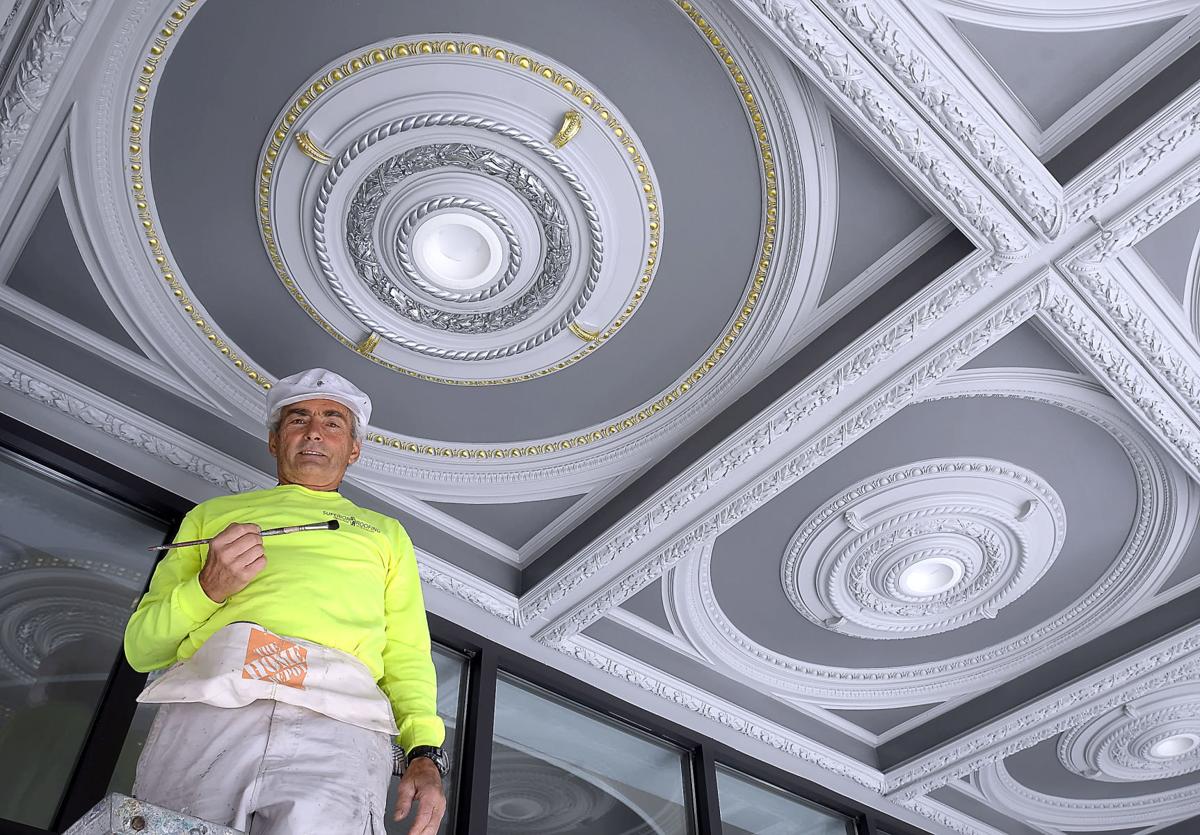 Chuck James is painting the exterior details at the Eccles Theater. 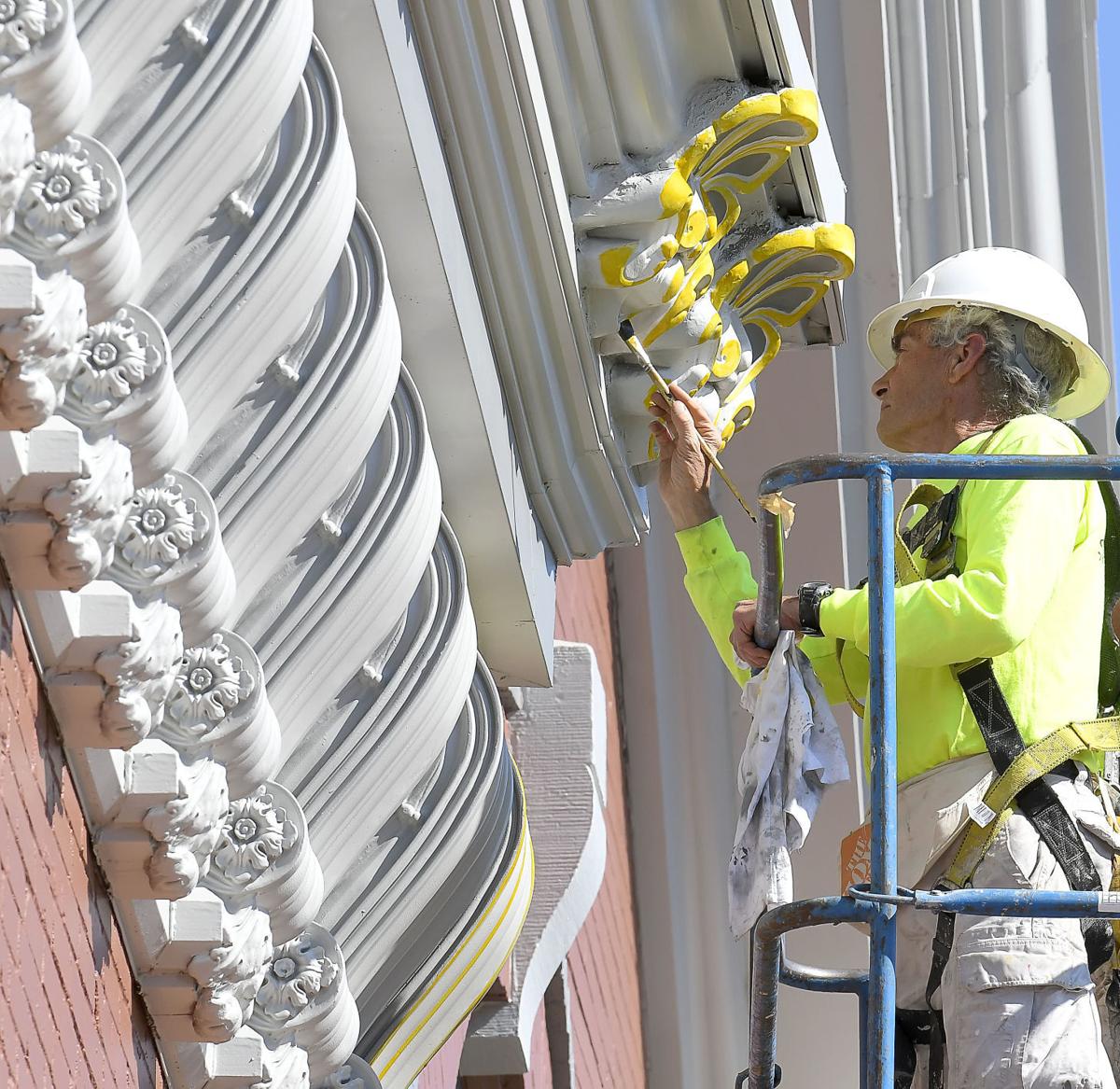 Chuck James paints the exterior details at the Eccles Theater on Wednesday.

Chuck James is painting the exterior details at the Eccles Theater.

Chuck James paints the exterior details at the Eccles Theater on Wednesday.

Chuck James is one of the last of his kind.

“The last of the old-fashioned painters, that’s what I consider myself, because there’s nobody left — they’re all gone,” James said. “It’s been a fun life.”

For around 60 years, James has been working as a painter taking his techniques of gilding, graining and marbling all over the globe. He’s painted everything from personal residences and high school auditoriums to state capitols and churches. And currently, at age 72, James is painting The Ellen Eccles Theatre — a building he’s worked on twice, among many other locations in the Cache Valley. A dedicated craftsman, James is motivated by the work itself.

“That’s what keeps me going is doing really, really nice work,” James said. “Something that you can be proud of and something that people like.”

At 9 years old, James started painting at the behest of his grandfather — an Italian house painter working in California.

“He came by and got me on a Saturday and said, ‘Come on, you’re coming to work with me,” James recalled. “He said, ‘I’ll make you a painter.’”

For three years James worked with his grandfather, James said, and by the age of 12 he was a solid painter. Two years later, James had his own painting business, making a wage unique to his friend-group by painting property owned by family members.

“I was the cheapest painter around,” James said. “I remember the day they raised the wages to a dollar an hour; I thought I had died and went to heaven.”

James painted his way through college, graduating from Brigham Young University with a pre-med degree, and eventually established a house-painting business in Park City. Nevertheless, James saw the “writing on the wall” that house painting wouldn’t fulfill him. An article in The New Era Magazine of The Church of Jesus Christ of Latter-day Saints inspired James; it said “whatever you are, try to be the best in the world.”

With no masters taking apprentices, and no internet to teach him, James found a single book in the BYU library that “had it all.”

“I photocopied every single page of the book; they wouldn’t let me take it out of the library,” James said. “I still have it.”

Around that time, a contractor told James to bid for an upcoming job at Assembly Hall in Salt Lake City. Without the skills to do the job, James sought out a pair of European painters in the area and made them a deal: if James’ high bid was accepted, the painters would get part of the job in exchange for teaching James what they knew. They reluctantly accepted, James said, and the bid was approved. He worked with them for a year and half.

“These guys were excellent craftsmen, and they were the old-fashioned painters,” James said, explaining they had partaken in rigorous, stringent apprenticeships. “When you graduated as a painter, you knew your stuff.”

After doing other various jobs for the Latter-day Saints, he wanted more. For James, he still didn’t know enough. That’s when he met his professional mentor, temple painter Henning Andersen. The highly credentialed Andersen was the embodiment of James’ goal after reading that New Era article years prior — he was the very best.

“He, in my estimation, was one of the best painters in the world at the time,” James said.

James worked alongside Andersen for 15 years as his apprentice, painting all around the world. They painted temples and special projects for the Latter-day Saint church, as well as the Michigan State Capital and the Los Angeles City Hall. In 1983, James started teaching decorative painting workshops, often with Andersen. Over the course of nearly 22 years, James said, he taught in nearly every major U.S. city, showing those interested in a “return to elegance” the tools of the trade.

Working with Andersen and teaching painting workshops were some of the brightest highlights of his professional life, James said.

“(Andersen) told me, ‘I will teach you everything I know,’” James said with a somber chuckle. “He couldn’t; he knew too much.”

Andersen passed away in 2002. It was a privilege to work behind Andersen, James said, and he couldn’t have received a better education. For James, Andersen’s upbeat and positive nature made him a joy to work and travel with.

“People loved him,” James said. “It didn’t ever matter what we did, if I screwed up or something, he’d say, ‘Don’t worry about it, we can fix it.’”

James currently lives in Eden with his family, where he operates Rocky Mountain Painting and a bed and breakfast. Keen eyes can find James’ signature in nondescript locations in various places in Cache Valley and beyond. He discreetly signed a cherub in the Eccles Theatre — which was painted over and subsequently reapplied. He also signed his name inside the Angel Moroni’s trumpet fixed atop the Salt Lake City Temple, which fell from the angel’s grasp during an earthquake in March.

“When you work three years on a job, part of you is there and will always be there,” James said. “I really enjoy going back to these jobs and remembering how much hard work went into beautifying these buildings.”