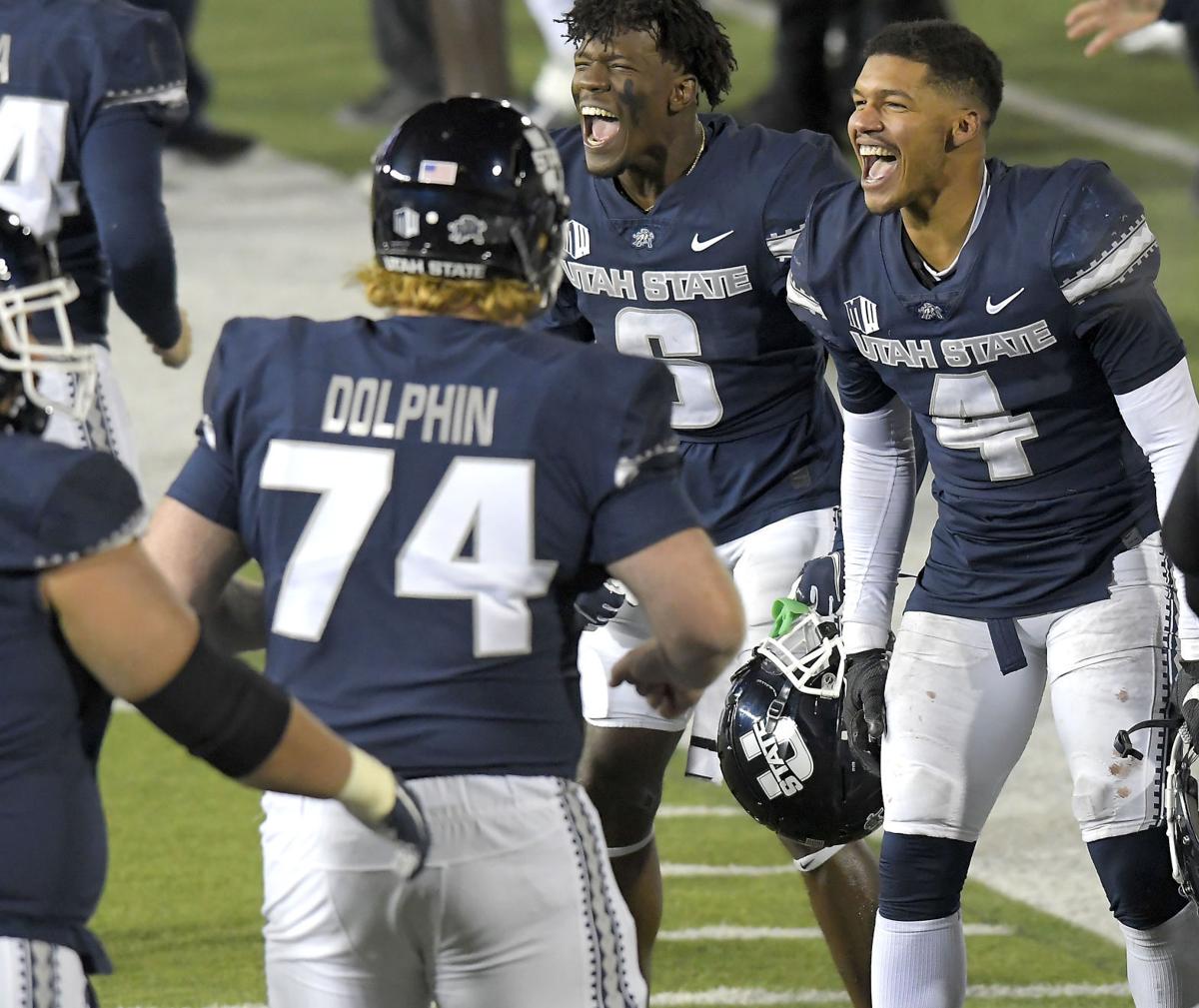 Utah State safety Shaq Bond (4) and other Aggies celebrate after the Aggies scored a touchdown during the second half of an NCAA college football game Thursday, Nov. 26, 2020, in Logan, Utah. (Eli Lucero/Herald Journal via AP) 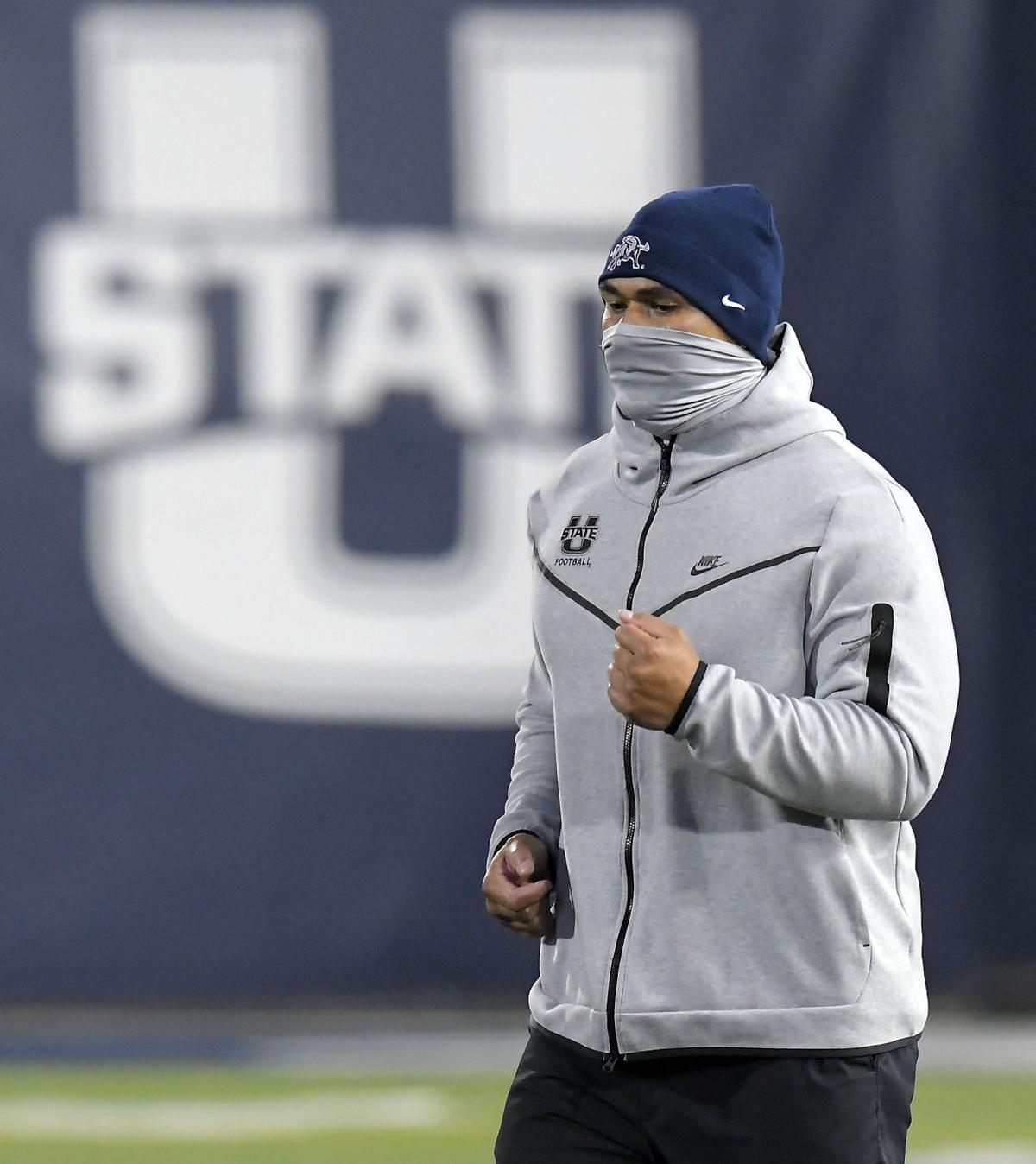 Utah State interim head coach Frank Maile runs off the field after the Aggies lost to Air Force 35-7 on Dec. 3, 2020, in Logan, Utah.

Utah State safety Shaq Bond (4) and other Aggies celebrate after the Aggies scored a touchdown during the second half of an NCAA college football game Thursday, Nov. 26, 2020, in Logan, Utah. (Eli Lucero/Herald Journal via AP)

Utah State interim head coach Frank Maile runs off the field after the Aggies lost to Air Force 35-7 on Dec. 3, 2020, in Logan, Utah.

One of the most trying seasons in the history of Utah State’s football program came to a crashing halt Friday.

The Aggies were scheduled to fly to Colorado late Friday afternoon in preparation for Saturday night’s season finale against Colorado State. However, that did not happen — the team never even went to the airport — as Utah State University has canceled the game “amid concerns voiced by @USUFootball players about religious discrimination during the search for a new football coach,” the university posted on its official Twitter account, @USUAggies.

That Twitter post, plus several others in a thread, were released a couple of hours after Stadium’s Brett McMurphy reported the Aggie players had opted out of the game.

According to McMurphy, there was a Tuesday Zoom call involving USU President Noelle Cockett, Vice President and Director of Athletics John Hartwell and the football team’s leadership council to discuss interim head coach Frank Maile’s candidacy for the permanent coaching job. Members of the team’s leadership council voiced concerns about what they felt were troubling comments Cockett allegedly made about Maile’s religious and cultural background. Maile is a member of The Church of Jesus Christ of Latter-day Saints and is of Polynesian descent.

Multiple reports came out Thursday afternoon that former Arkansas State head coach Blake Anderson will be the new head coach at Utah State, which was confirmed to The Herald Journal. USU has yet provide an official statement or press release, though Arkansas State did send out a release disclosing Anderson “has resigned to accept the same position at another FBS program.”

In McMurphy’s article, he reported an Aggie player decided to conduct an anonymous players-only survey, in which he asked his fellow teammates if they were on the Zoom call and whether they were concerned about anything they heard during the meeting. Approximately three-fourths of the players that responded to the survey expressed their concerns about a perceived religious bias against Maile, who has coached at USU for 10 seasons over two separate stints.

McMurphy reported none of the players were aware of each other’s responses and, after a lengthy players-only meeting Friday morning, the student-athletes unanimously voted to not play against CSU. McMurphy also reported the Aggie coaching staff was not involved in the meeting.

The team released a four-paragraph statement to Stadium, which reads as follows:

“On Tuesday, December 8th, the Utah State University Football Leadership Council held a zoom meeting with Noelle Cockett, President of USU, and John Hartwell, the Athletic Director. The purpose of the meeting was to have a say in the search for our new head coach. During the meeting, we voiced our support for Interim Head Coach Frank Maile. In response to our comments, their primary concern was his religious and cultural background. Players, stating their diverse faiths and backgrounds, then jumped to Coach Frank Maile’s defense in treating everyone with love, equality, and fairness.

“It is not the first time issues of repeated discrimination have happened. In December 2019, our head equipment manager used a racial slur against one of our African-American teammates. After disregarding the incident, pressure resurfaced to investigate in the summer of 2020. After the investigation, the administration concluded he would continue to be employed.

“We want our message to be clear that this has nothing to do with the hiring of Coach Blake Anderson, the recently-named head coach of the program. We are sure he is an excellent coach; we look forward to meeting him and his staff. We are highlighting the ongoing problems of inequality and want to create a better future for the community of Logan and Utah State University.”

Cockett responded to the allegations in a statement released on the aforementioned @USUAggies Twitter handle.

“I am devastated that my comments were interpreted as bias against anyone’s religious background,” she said.

“Throughout my professional career and, especially, as president of USU, I have welcomed the opportunity to meet directly and often with students about their experiences.

“Regardless of how difficult the conversations might be in the coming days, I remain committed to giving our students a voice.”

The thread also disclosed the university’s desire “to meet with players and hear their concerns in an open dialogue so it can address them.” Additionally, the thread also stated the university “takes issues of racial discrimination seriously, including the incident mentioned in the statement about a USU Athletics employee. USU hired an outside investigator to look into the incident, and took disciplinary action.”

The 2020 season has been one fraught with turmoil for the Aggies, who essentially missed out on all of spring camp due to COVID-19, which was especially problematic for a team implementing a new base offense and defense.

The Mountain West then announced in August it was postponing all fall sports because of the pandemic, only to reverse course six weeks later and release an abbreviated eight-game football season.

USU was blown out in its first three games by Boise State, San Diego State and Nevada, respectively, and head coach Gary Andersen was fired two days after the loss to the Wolf Pack, with Maile being named the interim head coach.

One week later, quarterback Jason Shelley was dismissed from the program “for a violation of team rules.” Over the next two weeks, a handful of players — all current or former starters — elected to walk away from the team and enter the transfer portal. USU’s road game against Wyoming was canceled due to an uptick of COVID-19 cases and contact tracing protocol within USU’s program.

In a Friday night press release, the Mountain West stated “the official standing of (Saturday’s USU-CSU) game will be determined at a later date.” If it is ultimately ruled a forfeit by the Aggies, they will finish with a 1-6 record.