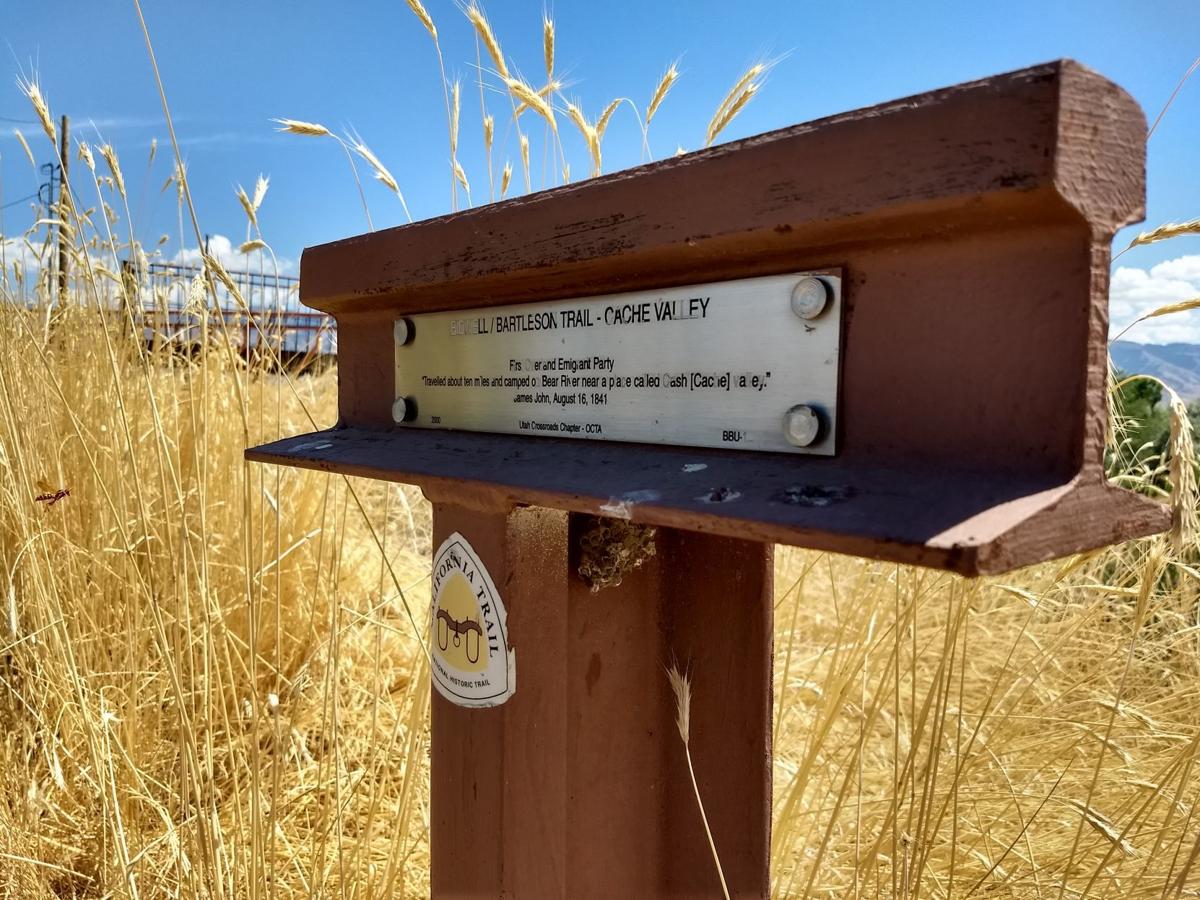 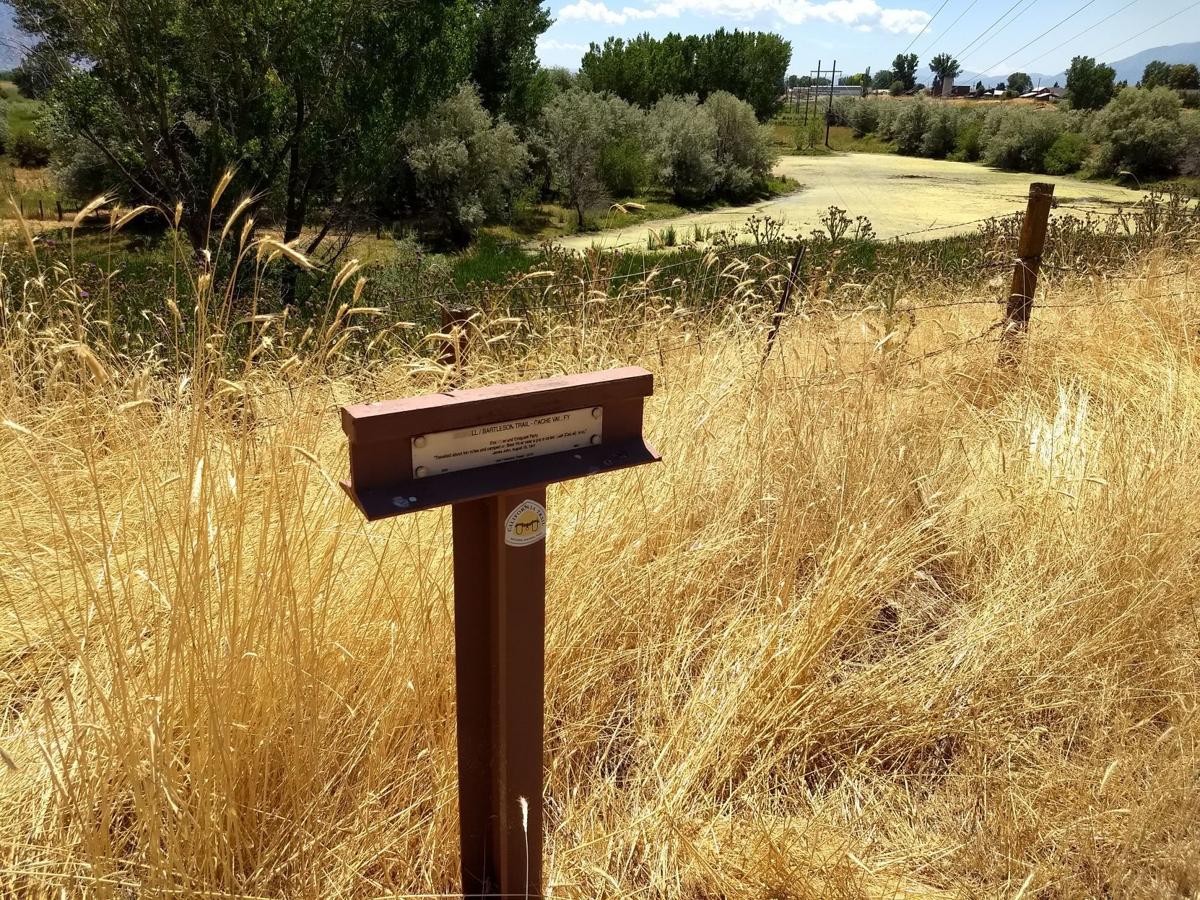 Q: I saw an iron California Trail marker near a bend in 2400 West in Amalga. What is this all about?

A: The main route of the California Trail does not pass through Cache Valley, but The Bartleson-Bidwell wagon party, regarded as the first white emigrants to cross Utah, did.

The company traveled from Missouri to California in 1841, completing much of the journey without a guide and with very little information on landmarks or natural features. They meant to stop and rest their teams in Cache Valley before crossing the desert, but one of the several mishaps the party had on their journey was only realizing they’d been in the valley at all when they made it to the northern end of the Great Salt Lake.

The marker in Amalga, located near a fence at 7250 N. 2400 West, bears the inscription of an entry from a journal of party member James John: “Travelled about ten miles and camped on Bear River near a place called Cash [Cache] valley.”

The Bartleson-Bidwell company followed the already-established Oregon Trail for the first part of their journey, where they met Jesuit emigrants guided by Thomas “Broken Hand” Fitzpatrick.

In a 1981 edition of his “Looking Back” column for The Herald Journal, local historian A.J. Simmons wrote that all the way from the Green River to Soda Springs, Fitzpatrick tried to convince the Bartleson-Bidwell party to abandon their aim to blaze a trail to California and take the safe bet, emigration to Oregon, with him.

“The country was virtually unexplored; only a handful of (white) men had ever crossed what is now Nevada. Even so knowledgeable a fellow as Thomas Fitzpatrick could offer little information about trails and landmarks.”

When they reached Soda Springs, the party had a decision to make. Half of the original 64 people in the wagon company decided to follow Fitzpatrick to Oregon.

Looking back several years later, John Bidwell wrote of the split: “Thirty-two of our party, becoming discouraged, decided not to venture without path or guide into the unknown and trackless region towards California, but concluded to go … into Oregon. The rest of us — also thirty-two in number … remained firm, refusing to be diverted from our original purpose of going direct to California. After getting all the information we could from Captain Fitzpatrick, we regretfully bade good-by to our fellow emigrants and to Father De Smet and his party.”

Despite the dilemma he pondered there, Bidwell wrote of Soda Springs in glowing terms.

“It was a bright and lovely place,” he wrote. “The abundance of soda water, including the intermittent gushing so-called Steamboat Spring; the beautiful fir and cedar covered hills; the huge piles of red or brown sinter, the result of fountains once active but then dry-all these, together with the river, lent a charm to its wild beauty and made the spot a notable one.”

Cache Valley got no such treatment from Bidwell, probably in no small part because he had no idea he had ever been in Cache Valley until he’d already passed through what is now Tremonton.

Simmons pieced together this description: “For the next week the wagons broke a trail where wagons had never gone before, along the west bank of the Bear River. It was mid-August when they drove through the western corner of Cache Valley, in what is now Utah. At their nightly camps they gathered the ripe yellow, red, and black mountain currants and the deep red chokecherries and wondered about tomorrow’s trail. They were lost. A week later, after they had made a wide circle in the swampy salt marshes near the point where Bear River empties into Great Salt Lake, they realized they had passed through the Cache Valley without knowing it.”

The marker in Amalga was placed there around 2001 by the Utah Crossroads Chapter of the Oregon-California Trails Association. A photo caption with an unidentified author describes the heavy steel markers the group uses: “They are riveted to the crosswise piece of rail and are expected to be both informative and resistant to vandalism.”

Around the same time, OCTA placed another marker commemorating the Bidwell-Bartleson company on the Long Divide, which crosses the border between modern-day Cache and Box Elder counties. The marker’s inscription bears an entry in James John’s journal describing the party leaving the valley: “Today we travelled about 20 miles … Here the river runs through a deep cut in the mountain which is narrow and nearly perpendicular and about 300 feet high.”

While the Bidwell-Bartleson route isn’t as famous as the paths the California Trail would take once it was more established, the first wagon train to cross to California was remarkable for several reasons.

Simmons sums it up: “Probably the most important fact is not that they were the first, but that they made it at all. After leaving Fitzpatrick at Soda Springs, they were without a guide. They just traveled west and trusted. Though they abandoned their wagons on the Utah-Nevada line and ended up walking into California; though they were short of provisions; though they traveled for a thousand miles through Indian country, there was no loss of life. Considering their late crossing of the Sierras, they could have been trapped in the mountains as was the Donner Party only five years later. It was impossible to look back on the 32 people who traveled with Bartleson and Bidwell and not be amazed at their innocence … and their success!

“It must have been beginner’s luck.”