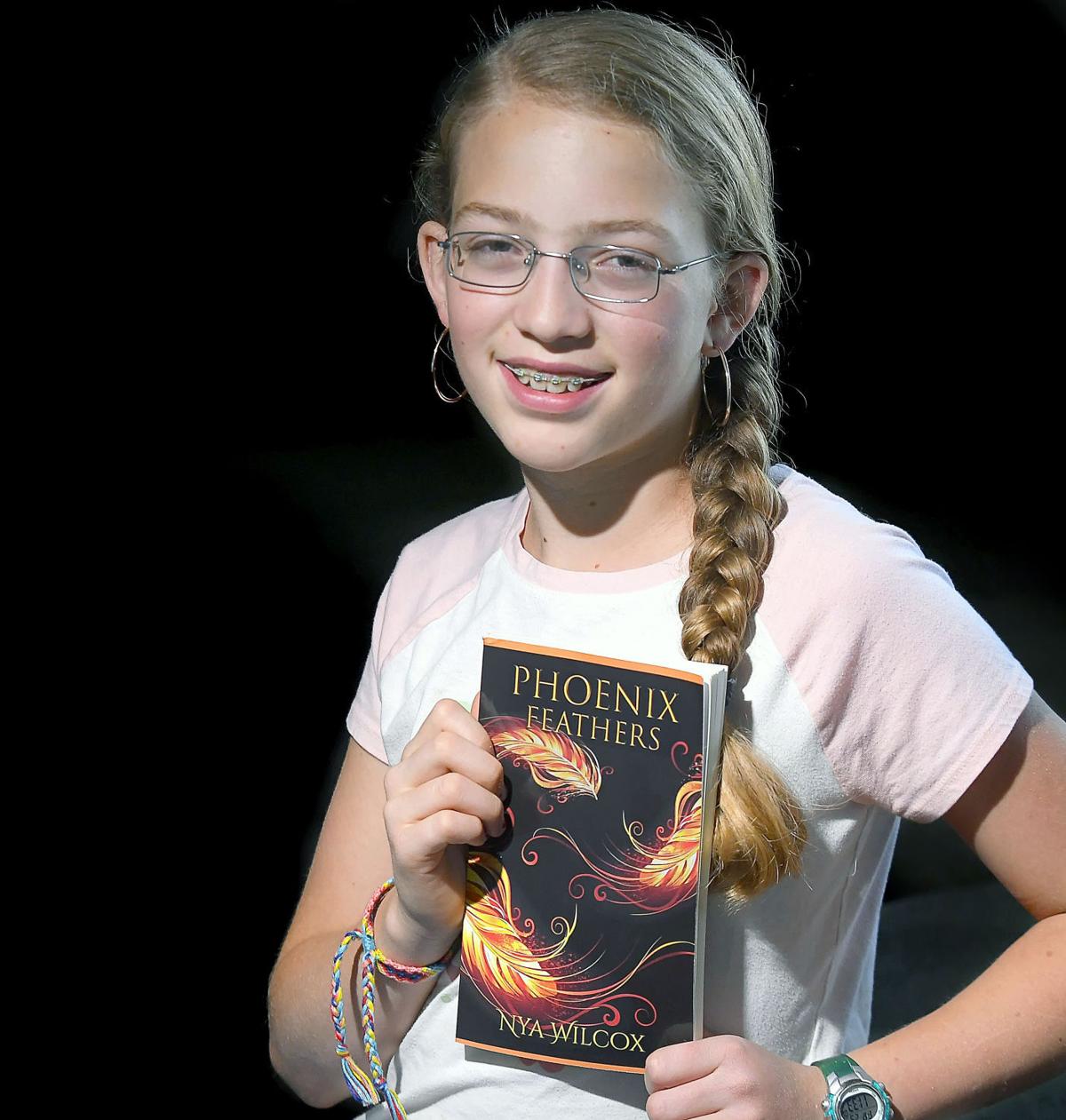 Nya Wilcox holds a copy of her book “Phoenix Feathers” that she wrote and recently had published. 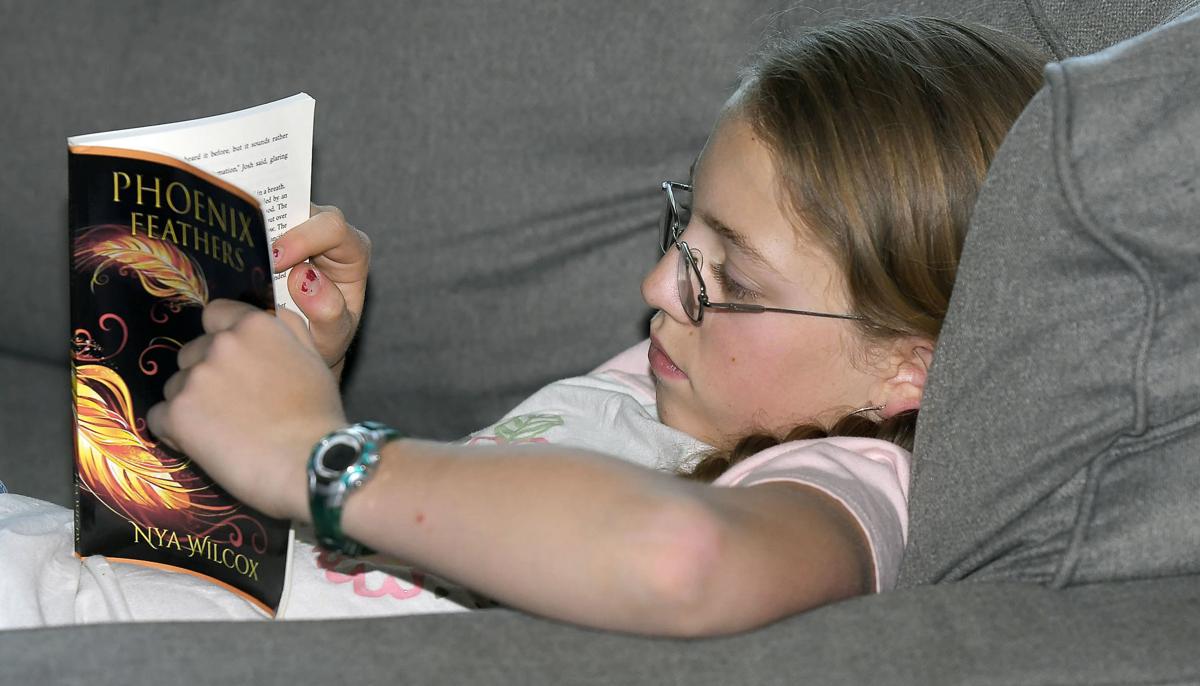 Nya Wilcox holds a copy of her book “Phoenix Feathers” that she wrote and recently had published.

Nya Wilcox can write, and she’s a published book to prove it.

The 11-year-old daughter of Mark and AmberLynn Wilcox recently had her fantasy novel come out in print. Phoenix Feathers is available on Amazon in paperback and can also be found on Amazon Kindle as an e-book. A simple search for “Nya Wilcox Phoenix Feathers” will bring you to it.

Phillip Chipping, an entrepreneur who lives in Hyrum, helped get the book published. He is very impressed with her writing abilities.

“It’s fun, imaginative and she does have an amazing command of the English language for an 11-year-old,” Chipping said. “... With the start she has got, it wouldn’t surprise me at all by the time she is 20 she has published numerous books and she is being published by real publishing houses and making good money. She has the talent, creativity and ability.”

The book, in paperback form, came out about six weeks ago. After posing for some photos and keeping her emotions in check, Nya clutched the book close and ran downstairs giggling when the camera was put away.

“I was really happy,” Nya said.

The story takes place in India. Having never been to that country, Nya did research to learn more about it and locations of cities.

“I didn’t know much about India, but I placed it there because a boy and his twin sisters find a Ruby Phoenix that can transport them places,” Nya explained. “I thought that it would be more likely for them to find that in India because of the culture and mystique there.”

The description for the book describes the story as: “A boy, his twin sisters and a wolf pup unknowingly embark on a quest to save a magical world. Facing fire, water, ice and armies, they must return stolen feathers to a trapped phoenix, who is their only chance of getting home. But an evil sorcerer and a Blizzard Queen will do all they can to stop them.”

The 125-page book took her a month to write. She wrote it last November as part of National Novel Writing Month (NaNoWriMo). There was some extra motivation.

“I knew she wanted to write books,” Mark said. “She had been trying. On Oct. 25, I got this great idea. I’m going to challenge them for NaNoWriMo — her and her older brother. You write a novel by the end of November and a you get a Lego set worth $20. Nya refers to it as The Bribe, all caps, italics, underlined. It was just a simple motivation to give them something to shoot for, a goal. Nya really took hold of it and ended up writing three-and-a-half hours a day to get it done.”

Nya would wake up early, work through lunch and stay up late.

“We weren’t pushing for publishing at that point,” AmberLynn said. “It was just to reach a goal and see what she could accomplish.”

This was not her first attempt at writing a novel. Twice before she has written stories, but “they didn’t work out, and I didn’t know anything about outlines,” Nya said. “... I started without an outline, but my dad made me come up with one. That helped, but there was also room for a few smaller plot twists, which was good.”

It was definitely a teaching moment for Mark, who does some writing on the side. Nya, her three bothers and two sisters are home schooled by their parents.

“We explained the difference between a discovery writer and an outline writer,” Mark said. “That gave her some direction. Here is my outline and I have room to play in it. She even said she surprised herself with plot twists all the way along even though she had that outline. But having that outline helped her get to the destination.”

Her parents are convinced it began with reading. Nya learned to speed read at a very young age. AmberLynn said reading is the first thing they work on in their home school.

“She has read the Lord of the Rings trilogy in 24 hours,” Mark said. “That gives you an idea. ... She has a gift for ready and comprehension. That has translated pretty well to knowing how to write a story and convey realistic characters. She has picked up a lot from her massive amounts of reading and it’s translated into very readable novels that still has innocence and the fun of youth. There are a lot of laugh out loud funny stuff.”

“We ask ‘are you getting this?’” AmberLynn said. “We ask questions and she is able to answer all of them.

Besides the challenge, why did she want to write a novel?

“I read so much that I thought that it would be cool if I could write one,” Nya answered.

When they decided to try and get Phoenix Feathers published, Nya, with the help of her father, spent three months “polishing” it. Mark designed the cover.

“We used KDP — Kindle Direct Publishing,” Nya said. “It was super helpful. ... It checked it for any flaws and then sent it back saying it was good.”

“Phillip Chipping reached out just at the time on Facebook looking for teen authors that had finished books,” Mark said. “He works with Teen Author Boot Camp, which is an event down in Provo. They were getting ready for their event and were looking for teen authors to highlight and publish. AmberLynn found him in some of our Facebook communities we follow and told him we had a daughter that just finished a book. She isn’t a teen yet, but the principle holds.”

“I’ve done a lot of self-publishing. The self-publishing world is a very scary one. People get taken advantage of a lot. I wanted to create an affordable option for teens and parents of teens.”

What was Chipping’s first impressions when he read the book?

“She (Nya) is amazing,” Chipping said. “I was blown away. People are going to think there is no way that an 11-year-old wrote that because of her use of vocabulary. She is a very advanced girl, and that is her passion, her love. Her parents have been really good at helping her develop those skills and encourage her. ... My eight-year-old boy absolutely loved the book. We read stories at bed time. He was so into it, he wouldn’t wait for me after three nights and read it all on his own during the day time.”

Nya gets influences from what she has read. For example, the Blizzard Queen in her book reminds you a little of Narnia’s White Witch, but is not the same character.

“Those are much better than mine, so I won’t compare,” Nya said of books she reads.

Before moving to Smithfield with her family, Nya lived in Jackson Hole, Wyoming. There are young authors contests in Wyoming. She took first in Teton County out of all the schools and tied for second at state in her age group. Nya accomplished that twice when she was six and seven years old.

Right now she is interested in fantasy and listed the earlier books of Jessica Day George — not the later ones — as her favorite. As already mentioned, the Lord of the Rings trilogy is a favorite.

“The Hobbit was always getting checked out,” AmberLynn said.

“I’ve paid enough library fines on that book (The Hobbit) that I could have bought it three times,” Mark said.

Surprisingly, her favorite school subjects are not English or writing. Nya lists history and geography.

“She does not like the diagramming of sentences, but who does, right?” AmberLynn said. “... She is very responsible. She is the one we go to for help.”

When asked about a future career, Nya said she thought she would like to paint, but now is thinking her first choice is writing. She is currently working on a sequel to Phoenix Feathers and has two chapters done. Nya is also working on a book from a dog’s point of view going along the Oregon Trail. Both of her parents called it “very cute.”

What advice would Nya give to young writers?

“Don’t worry about trying to make your characters big and elaborate,” Nya said. “Worry about making them realistic. When you make the conversations, make it like you are talking with a friend. Don’t worry about clichés, even though I do have a few.”

Her mother reminded Nya that having an outline is also good.