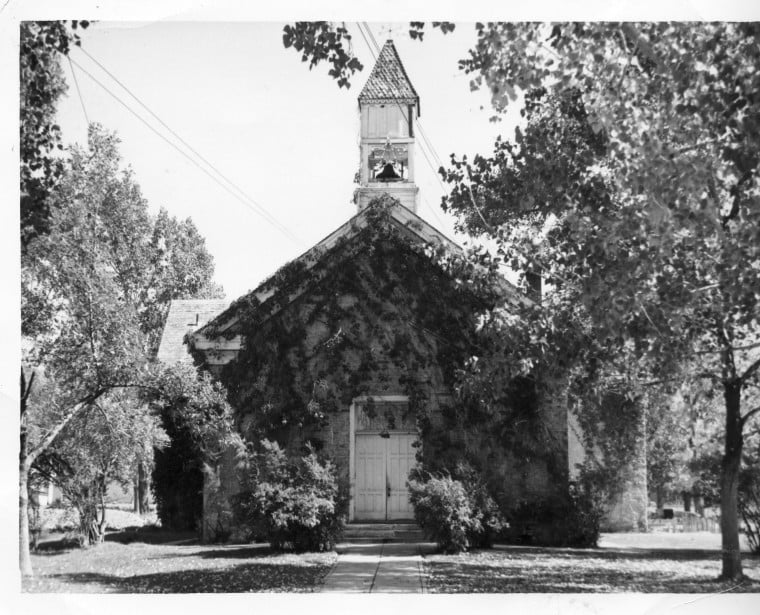 The original stone church in Paradise, circa 1900. The chapel was completed in 1877 and is seen here with an east addition that was added at around the turn of the century. 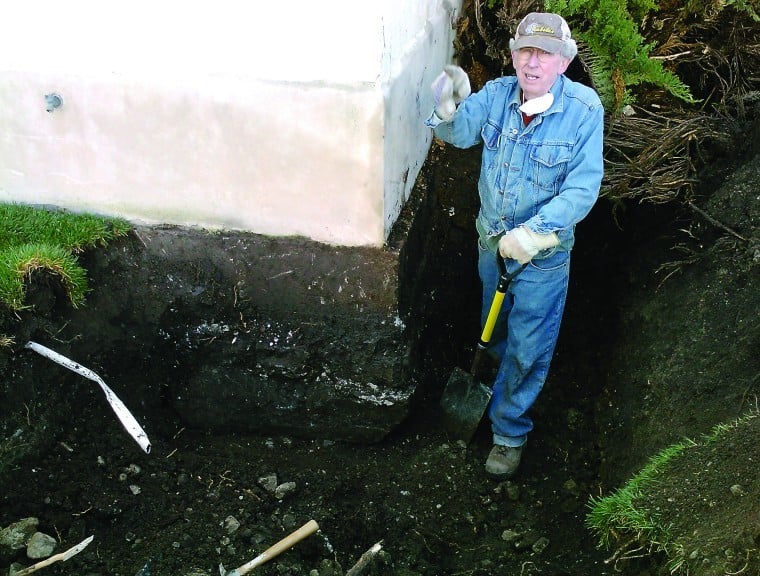 Mormon archeologist Garth Normon stands next to the cornorstone of the Paradise LDS chapel after it was excavated last week.

The original stone church in Paradise, circa 1900. The chapel was completed in 1877 and is seen here with an east addition that was added at around the turn of the century.

Mormon archeologist Garth Normon stands next to the cornorstone of the Paradise LDS chapel after it was excavated last week.

Easter Sunday service inside the Paradise 2nd and 3rd Ward chapel was the last for the landmark stone building.

Next month, the 133-year-old church in the center of town will be leveled to make room for a new chapel that will serve nearly 1,000 Latter-day Saints in southern Cache Valley.

The pioneer-era church is one of the oldest Mormon chapels in Utah and, according to church historians, exhibits the uncommon craftsmanship employed by early settlers. The limestone rock chapel, completed in 1877, features architecture and construction techniques shared by earlier LDS churches and temples.

“Some of these early-settler builders had worked on the Nauvoo temple, and could have naturally incorporated their knowledge of temple architecture into the design and construction of the new rock church,” said Garth Norman, a contract archeologist for the LDS Church. “It is said the pioneer rock church in Paradise was being built to last forever, assuming the 28-inch-thick stone walls would endure.”

Generations later, they have. Norman said there is no evidence of cracking in the building’s hardened limestone walls.

It’s likely construction on the Paradise chapel began in 1876 with the placement of four large cornerstones. The practice, says Norman, has both practical and theological ties.

“In the temples, these stones were dedicated to Christ, ‘the chief cornerstone’ at the southeast corner and offices of the priesthood at the other three corners, all reaching out to administer the restoration of the gospel to the world,” he said.

Dig deeper and you’ll find other connections that Norman says link the Paradise building to some of the earliest church architecture. The length of the original rock church, for example, is twice its width — the same design used for the largest room of the Nauvoo temple.

With so much history built into the Paradise church, top leadership carefully considered preserving the enduring structure.

Hyrum Stake President Steve Miller, the top ecclesiastical leader over the four wards in Paradise, said the church’s First Presidency was even in on the conversation to save the building, but ultimately decided to build anew.

Church engineers visited the site in recent months and determined a restoration would be impractical.

“Given the fact that the structure was in the shape it was in, it wasn’t logical to try to restore it,” Miller said.

After speaking with residents who used the building, Miller learned a majority of members preferred a modern facility given the cost to renovate the existing one. The original structure has been added onto multiple times, including major portions that were annexed in the 1950s and ’60s. The church was also recently upgraded with modern restrooms and was consistently maintained to meet strict safety standards.

The building is not, however, in compliance with today’s seismic codes and has problems with its roof and foundation. Despite its age and impending demolition, says Miller, the church is part of the cultural fabric of Paradise and Avon.

“The building has a great sentimental attachment to many people,” he said. “They grew up in it and they were there during different phases of remodeling.”

On Monday, crews will begin removing ceiling tiles that contain asbestos and last week, contractors were inside salvaging wood and removing fluorescent lamps. Ward members were even given the chance to buy used goods in the building, including hymn books, furniture and fixtures. By Friday, little remained after dozens of faithful showed up to purchase everything from wooden pews and gym floor boards to shelving and bathroom fixtures. Even the doorknobs were taken.

“They sold anything and everything,” said Neil Erickson, a stake leader who oversees church properties. “Why waste something that can be used by someone else?”

One part of the building likely to stick around are the four original cornerstones.

Even before he knew they were there, Norman suspected the signature stones were buried beneath the church and traveled to Paradise from Utah County to do some digging.

“In anticipation, I excavated outside the west corners of the rock church on April 12 to check for cornerstones before demolition begins,” he said. “Both corners have big 12-inch-high stones jutting out beyond the stone walls laid on top. The northwest cornerstone measures 16 by 19 inches and the southwest stone is much larger, measuring 24 by 38 inches.”

Norman and other visitors to the now-gutted chapel have discussed the possibility of using the stones in some kind of commemorative monument at the new chapel, but LDS Church officials have made no statement about re-using the large pieces.

During upcoming construction, members of the Paradise 3rd Ward will meet in the city’s newest chapel just six blocks southeast, and 2nd Ward members will congregate at a church in Hyrum.

Erickson said it will be exciting to see a new chapel go up, but a vexing question remains.

“What are we going to call the new building?” Erickson said with a laugh. “We already have a ‘New Paradise Building.’ We’re starting to wonder how we’re going to make that work around here.”

Miller said he and other stake leaders have asked the church’s building department if original elements of the Paradise church could be incorporated into the new design. Original rock, he said, will become part of a stone facade and the blueprints will call for a modified steeple that doubles as a bell tower, housing the original bell from the 19th century church.

Some residents wanted to see the stone chapel stay. Nick Nielsen of Paradise and his family have used the building for more than a decade and said it will be heartbreaking to see the old church go. Nielsen researched the history of the chapel for use in a proposal to the church’s building department in an effort to save the original rock portion.

“So many people around here have great memories of that building,” he said. “It’s a noble building and it’s sad to see it come down.”