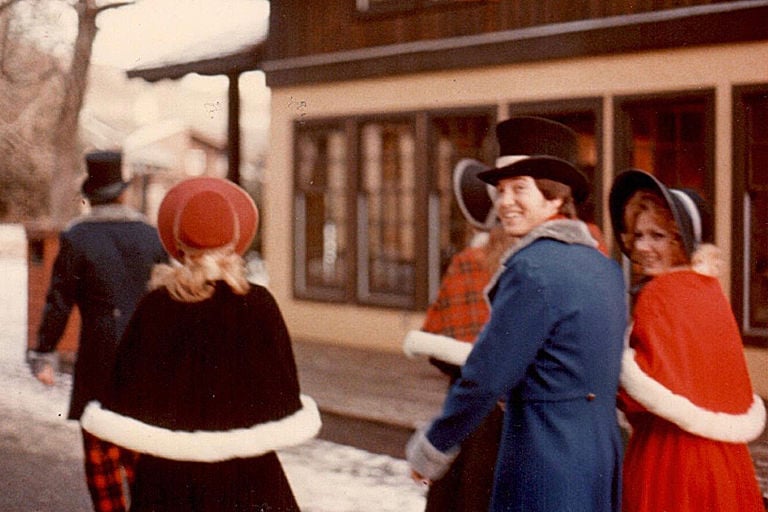 The “Sun Valley Carolers” from USU.

The “Sun Valley Carolers” from USU.

With final exams concluded, the carolers were now performing for numerous university and community festivities, usually in a milieu of dazzling displays of seasonal foods highlighted by the lights from hung Christmas decorations and beckoning table settings. The carolers confidently moved from one party to the next, filling each crowded room with bursts of light and beautifully honed sounds of Christmas. In a few days the singers would be traveling north to Sun Valley to provide similar entertainment and Yuletide goodwill at the various resort facilities and along the walkways between.

A day or so before the scheduled Sun Valley departure, the carolers settled into their USU “Christmas” van for a final round of local engagements. As the evening wore on, the van made its way west, away from campus across the darkening Cache Valley floor. “I’m taking you to one last visit tonight,” advised the group’s musical director.

As the van came to a stop, the student performers became hushed. Looking out, they seemed perplexed. Some distance from the snowy road was a small, dimly lit house amongst scattered and bare trees and bushes. A faintly defined pathway led to the front door.

The director knew something of the household within: a woman in her 90s and her aging live-in nephew. In this nestled farming community, a young “Lottie” in her pink, white-laced dress had been the town May Day queen in 1901. Her first husband died of diphtheria after eight months of marriage. A newborn infant died eight months after the death of the baby’s namesake father. The bereaved young widow resettled at her parents’ home and remained faithful to church and community causes. She remarried in 1917 but cancer claimed the life of her second husband in 1966. When her schizophrenic nephew Daniel lost his parents to divorce and dysfunction, she took him in.

Now the moment to exit the van had arrived. “Maintain your character,” reminded the director as the group, single file, began softly singing while coursing their way to the front door. The door opened. The director led inward, followed by 16 carolers in radiant countenance: “Caroling, caroling, near and far …” The abode’s small living room provided hardly enough space for the carolers to circle the two occupants, the woman in her armchair by an old radio, and Daniel seated in an opposite corner near a curtained toilet. Not a flinch was noted of the singers upon their eying the humble circumstances. The spirit within the room evinced itself in all directions as one carol after another warmed and transformed the conditions within.

It was time to leave. The woman slowly stood, opened a worn dresser drawer, and pulled out a small bag of plain chocolates, offering them all around.There were no words as the carolers made their way along the dark path and climbed into the van. As the door closed an explosion of emotionun leashed within the group: bursts of screaming, tears and hugs, exclamations of joy and exultation from youthful souls that could not be contained.

The performance commitment at Sun Valley that year carried a deeper, lasting sense of Christmas for 16 life travelers.

Richard Watkins is a resident of Mendon.