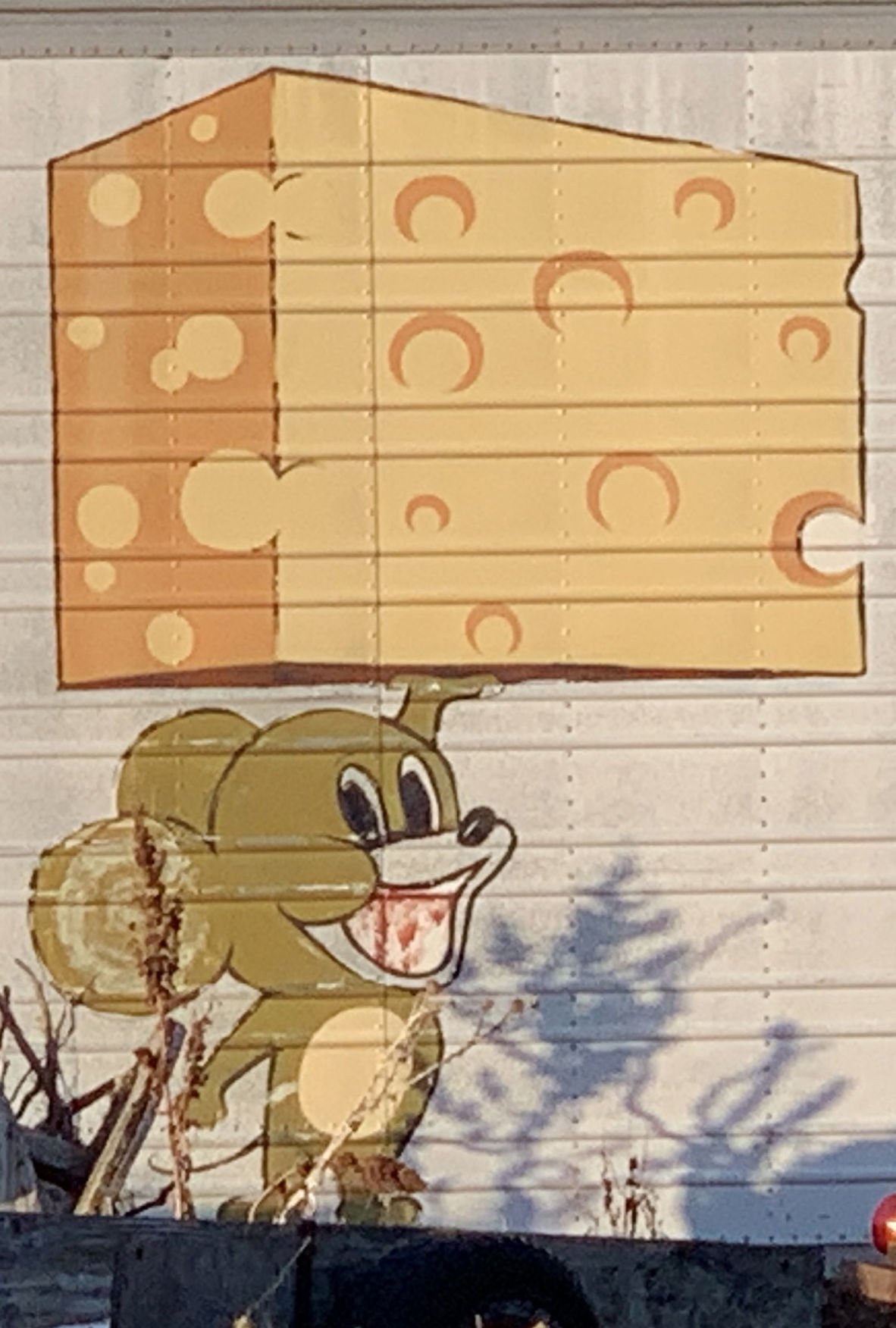 An old Cache Valley Cheese emblem is visible on a semi-trailer in an equipment yard off 10th West in Logan. 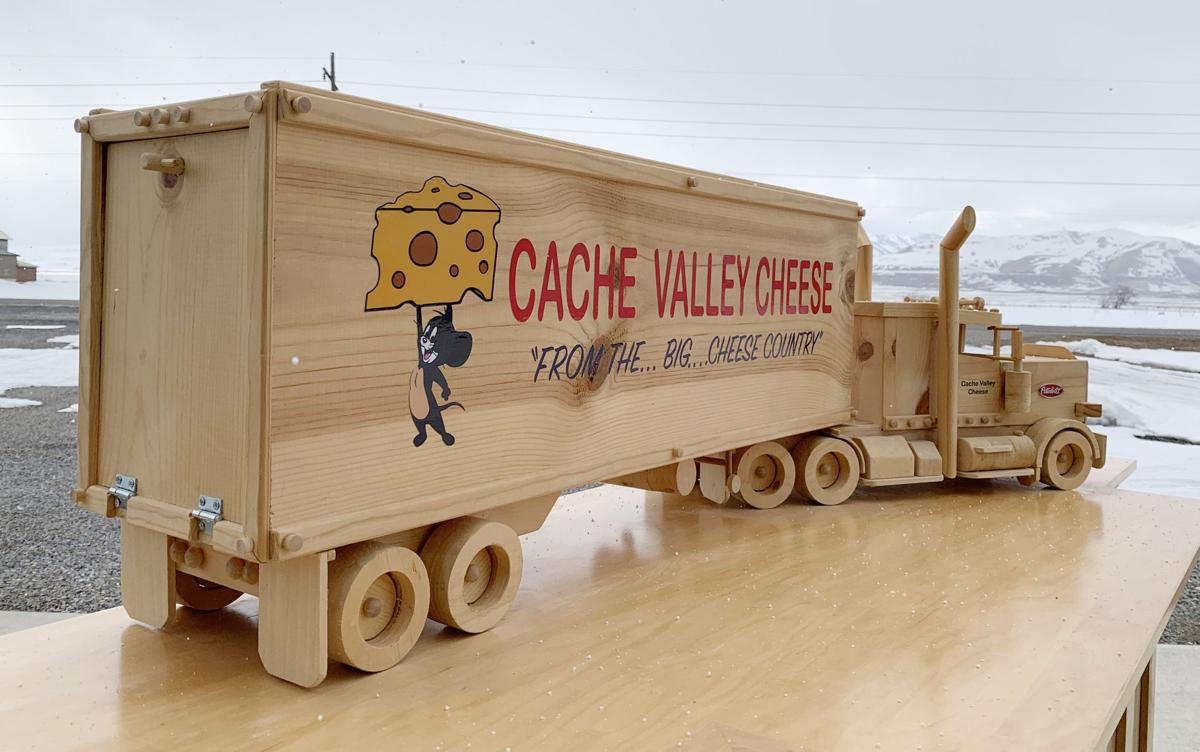 Amalga resident Paul McKenny once drove a semi delivering Cache Valley Cheese around the West. This wooden replica of McKenny's rig was made by his brother, Lee.

An old Cache Valley Cheese emblem is visible on a semi-trailer in an equipment yard off 10th West in Logan.

Amalga resident Paul McKenny once drove a semi delivering Cache Valley Cheese around the West. This wooden replica of McKenny's rig was made by his brother, Lee.

News flash: The brand of cheese labeled “Cache Valley” is not actually made in Cache Valley.

Yes, you read that right.

This is a little-known fact I stumbled upon earlier this year while trying to satisfy my curiosity about something else. What I was originally interested in was a faded old Cache Valley Cheese emblem on the side of a junked semi-trailer visible out the window of the Herald Journal office on 10th West in Logan.

The emblem, which many Cache Valley old-timers will remember, features a cartoon mouse hoisting a block of Swiss cheese over its head with one arm, Mighty Mouse style. I’ve always been drawn to remnants of the past still visible in the landscape, especially the campy illustrations and slogans you sometimes see on old signs, so I decided to do a little research on the mouse logo and cheese brand to share with Herald Journal readers.

A little research wasn’t enough. Although the origins of Cache Valley Cheese are documented online, the current status of the food label proved difficult to determine — especially since nobody would return my phone calls inquiring about it.

After frustrated attempts to speak with several big cheeses in the cheese industry, I finally managed to get a lower level employee with Dairy Farmers of America — the current holder of the brand — to say a few words on the matter. She put me on hold for some time but eventually came back on the line to confirm that the dairy product named after our scenic corner of northern Utah is produced in Fillmore, Utah, and Green Bay, Wisconsin.

Many of you may have thought, like I did, that either Gossner’s or Schreiber’s, the valley’s two big cheesemakers, were involved with this iconic local product. The history of Cache Valley Cheese does intersect with both of them, but that’s all in the past.

It’s a long, complicated story for which I have only the rough outlines. Here’s a synopsis:

Cache Valley Cheese (uppercase C) was originally produced by the Cache Valley Dairy Association, which took over the decades-old Amalgamated Sugar Company plant in Amalga in 1941. According to the Wikipedia page for the town of Amalga, the local dairy co-op made use of the cheese-making expertise of Swiss immigrant Edwin Gossner, who stayed for 24 years before leaving in 1966 to start his own company, Gossner Foods in Logan.

Things got pretty competitive from that point on, as evidenced by lawsuit records and the fact that Gossner purchased all of the property surrounding the plant owned by his former partners, presumably to keep them from expanding. I didn’t believe this when I first heard it second hand, but it’s true. Check out the Cache County Parcel and Zoning Viewer online and you can clearly see the Amalga plant is bordered on all sides by Gossner-owned land, reminiscent of battle maps showing how Grant pinned in the Confederate army at Vicksburg.

The plant had a number of different operators and partnerships after Gossner’s departure in 1962. I found a 1996 news article noting the Dairy Farmers of America and Schreiber Foods had a joint operation at the plant at that time, with one entity producing Cache Valley Cheese and the other packaging and selling it.

A decade later, that relationship was apparently over. Schreiber’s now owns the facility and DFA owns the brand, but neither company would give me the details of the original relationship or the split. The aforementioned employee on the phone only offered that DFA "acquired the label in 2006," nothing more.

Though it apparently no longer has a presence at the Amalga plant, DFA does own the well-known “Cache Valley Creamery” in the town of Beaver, Utah, where its namesake cheese is sold. This is not far from Fillmore, where I was told the cheese is made.

If you look at the modern packages compared to old ones, you’ll notice they say “Cache Valley Creamery” instead of “Cache Valley Cheese,” a slight but possibly significant distinction.

And here’s something I ran across in my little exploration that could explain why nobody has rushed to return my phone calls. The Cache Valley Creamery website bills its marque product as follows:

“Here, in this hidden gem of a pristine land, nestled among the Wasatch, Bannock and Bear River Mountain Ranges, lies Cache Valley. Here, tucked away from the rest of the world, is a land and a people of goodness. Here, our cheese is inspired by the valley and stands as a product of ourselves and what we hold most dear. Taste the goodness.”

Now, if you read this carefully, you’ll notice nowhere does it specifically state Cache Valley Creamery cheese is made in Cache Valley, and though one of the photos accompanying this poetic product pitch does show a beautiful mountain valley, it’s clearly not ours. But, gosh, I can sure see how someone visiting the website might think the cheese is made here.

Oh well. Fillmore, Green Bay, Amalga, Smithfield, Kalamazoo … I honestly don’t think it matters to most consumers. I’m just broaching the whole subject because I do think it’s something local residents will find more than a bit interesting.

But let’s get back to that old semi-truck emblem that got this whole thing started. After pointing it out to several people earlier this year, I was referred to a local retiree who used to deliver Cache Valley Cheese in a semi sporting the mouse logo. Not only that, he has a large-scale wooden replica of his rig.

I visited Paul McKenny at his home near Amalga late last February, just a few days before the coronavirus pandemic turned our world inside out and put a hold on fun, nostalgic newspaper writing. We had a great talk about his trucking years, pulling his whimsical trailer up and down the Pacific Coast and elsewhere in the West from about 1980 to 1996.

The emblem, sometimes accompanied by the slogan “From the … Big … Cheese Country,” didn’t just grace refrigerated semi trailers like McKenny’s. It was also featured prominently on billboards around the region. McKenny’s late brother, Lee, made the truck replica, and Paul had the logo reproduced from scratch at Sign Pro in North Logan — a project that resulted in greater expense than the wood used for the replica itself.

The logo on McKenny’s semi was slightly different from the one on the junked trailer next to the newspaper office, pictured here. McKenny displays the replica in his immaculate man-cave/storage garage along with a cherried-out vintage Impala and some other interesting memorabilia. For the picture you see above, we rolled the table holding the replica out on McKenny's driveway where he thought it would look good with the snow-capped mountains in the background.

Like I said, that was back in late February, before a virus we’d all just barely heard of would suddenly dominate our lives. After almost eight months, I decided to go ahead and tell this story that I just couldn't hold in any longer.