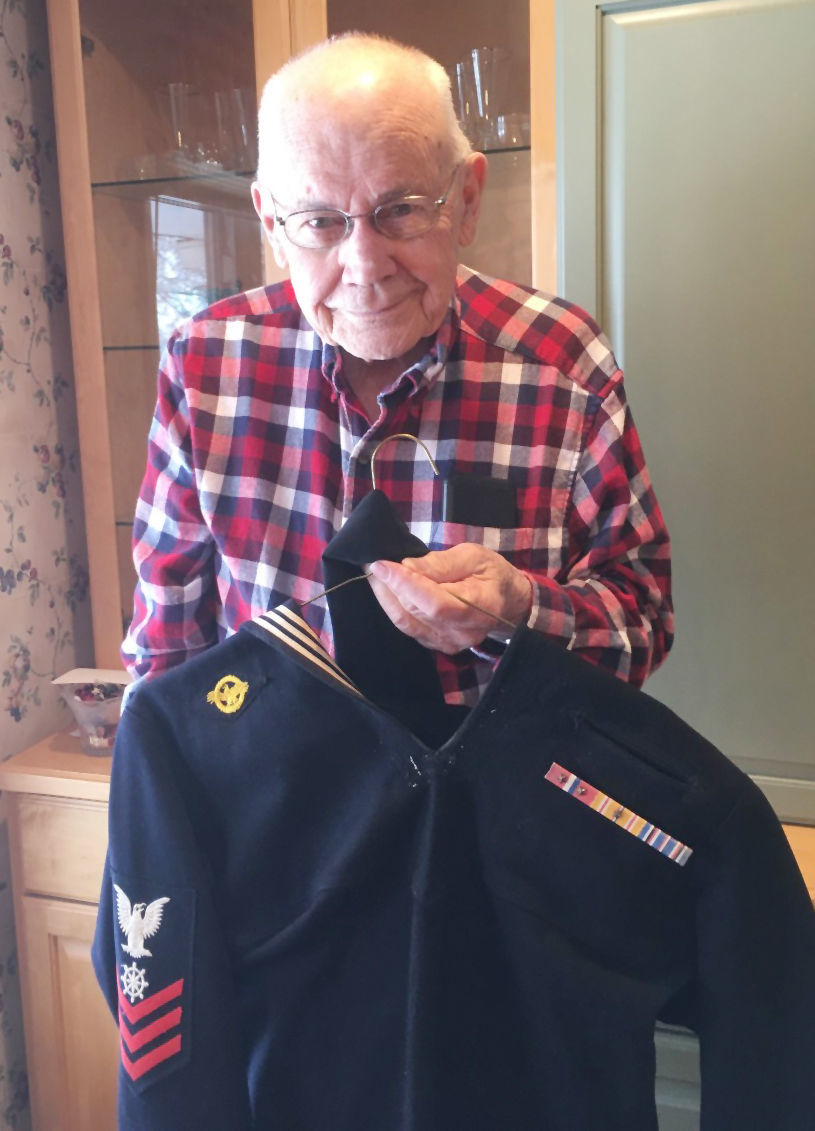 World War II veteran Ted Perry displays his Navy quartermaster uniform during a recent interview. The Cache Valley native served on the USS Fuller in the Pacific Theater during the war.

World War II veteran Ted Perry displays his Navy quartermaster uniform during a recent interview. The Cache Valley native served on the USS Fuller in the Pacific Theater during the war.

Note to the reader: Inspired by a fellow HJ columnist’s recommendation to be grateful, my remaining columns for 2019 will focus on thanking people in Cache Valley.

Assisted-living facilities and homes for the aging house the few remaining people who experienced conflict younger generations can only read about. The Greatest Generation deserves our gratitude for all they did to get America through the Great Depression and WWII, arguably the hardest times in recent history.

94-year-old Cache Valley native Theodore “Ted” Perry remembers Pearl Harbor day well. “How could I forget? We were all in church,” Perry said. “Somebody rushed in and said the Japanese are attacking Pearl Harbor.”

At the time, Perry was 16 years old. He explained the level of panic that made the United States tremble for the next few days. His family members in California were worried about a Japanese invasion. “We had few guns and no defenses inland,” Perry said. “We lived in terror until we found the Japanese had made that one bombing raid and then went back home.”

The attack of Pearl Harbor inspired Perry to join the war effort. “I had two cousins in the armed forces,” Perry said. “One of those cousins got captured and the other one killed, but when I turned 17, I joined up anyway.”

Perry became a naval quartermaster 3rd class. He explained that quartermasters are the only people allowed on the bridge besides the officers. Perry was often at the wheel on his assigned ship, the USS Fuller.

“And what a boat!” Perry exclaimed. “You can’t believe my ship. It was built in 1912. It was used as a cargo ship… . It was the worst looking ship!” In the dry dock, welders and mechanics worked desperately to add more length and cargo space to the boat, turning it into a military transport.

Perry recalled the conversation with his friend and mentor Mario Berri about the USS Fuller’s seaworthiness. “Berri told me, ‘I know that ship looks awful, but it’s been in Bougainville, it’s been in Guadalcanal. It’s had three quartermasters killed in Bougainville, and you’ll take one of their places’. ... That part didn’t make me feel any better.”

Perry’s vessel went to Pearl Harbor in 1943. Her crew and 2,000 Marines trained as part of an invasion force. The U.S. Navy was toiling to gain more strength in the South Pacific, countering Japanese aggression. When the call to sail came, the USS Fuller was ready.

“There were three task groups,” Perry said. “We left Pearl Harbor and traveled however many thousand miles. When we got close to Saipan, our task group was told to circle. The other two went north around the top of Saipan and came down to invade the west side. We pretended to invade the east side to draw the Japanese troops to the east. Meanwhile, the guys on the west side wouldn’t have much trouble.”

Perry was assigned to steer the ship. It could not even be half a degree off because they were the closest ship to the island and could be hit. “My commanding officer said, ‘Make sure we don’t get any closer than the range of the guns.’ After three hours, we got into the invasion on the west side. It was the worst wave to get in. We had to pick up all the injured Marines, and we had to pick up even the injured Japanese troops. You don’t think that was a mess? Those poor guys.”

After taking the injured back to Eniwetok, Perry and the USS Fuller saw four more major battles: Tinian, Peleliu, the Phillippines and Okinawa. Mistakes in some of the landings made for horrible slaughter. Kamikaze fighters attacked again and again. The bloody battles for strategic islands made the Pacific Theater perilous, at best. But the American troops would not give up. Their fortitude led to the surrender of the Japanese.

“I was there!” Perry said. “I was at Yokohama when the Japanese surrendered. We, of course, didn’t have any charts ... we had to get someone to guide us in. ... So this Japanese fellow was standing by me telling which way to go, and the translator was telling me ‘he said this,’ and I’m supposed to steer the ship in without running over a mine… . But we made it through.”

I asked Perry what he would want the younger generations to know about WWII and the people who fought in it. He said, “Tell them that in those days, a lot of people worked on the farm and these farm boys had no experience at all. All of the sudden, we were firing guns at the enemy and receiving fire. But it didn’t bother us at all. People cannot realize how brave our young men were — 17, 18 and 19 years old, knowing they are most likely going to get killed yet they loved their country so much, they were willing to give their life for their country.”

To Quartermaster Perry and his peers, thank you for your courage. Your personal sacrifices, bravery, and resilience guided the country from a place of uncertainty to the position of a world leader. Most of our readers cannot fully appreciate the level of commitment and dedication that was required at your hands. You deserve our gratitude and have earned the title of the Greatest Generation many times over.

Kate E Anderson is a mother of five living in North Logan. She can be reached at katecole9@yahoo.com