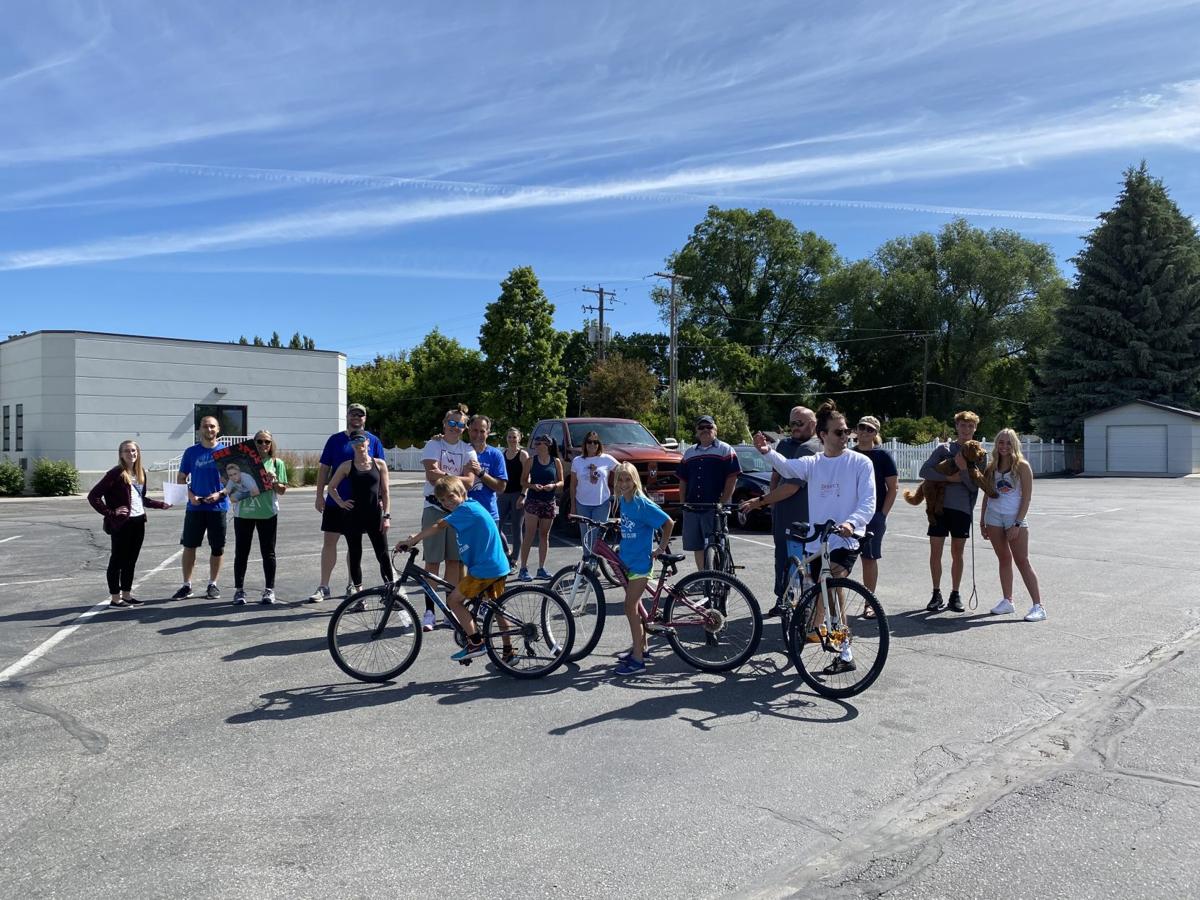 Family and friends show up to support Jack at the beginning of his half marathon. 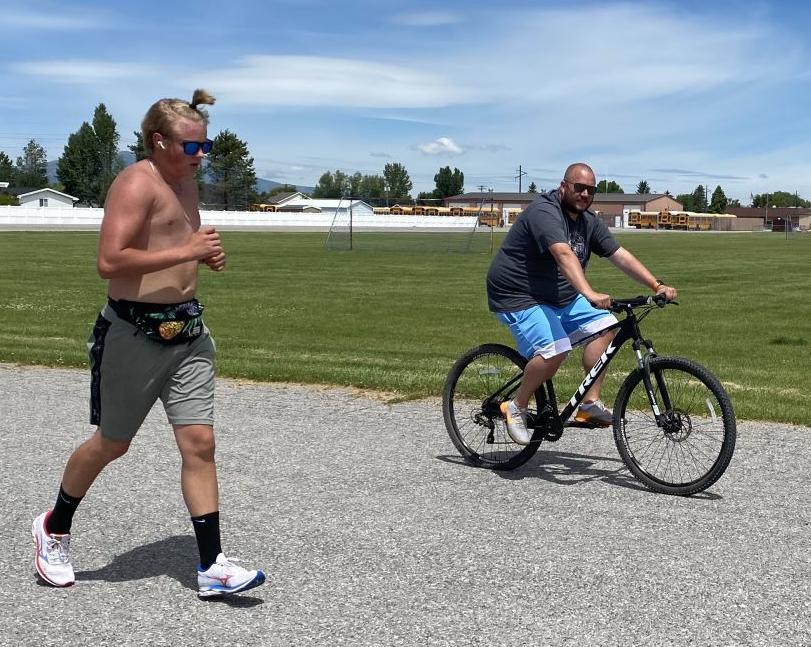 Jack runs alongside his dad, Ryan, who biked the entire course with him. 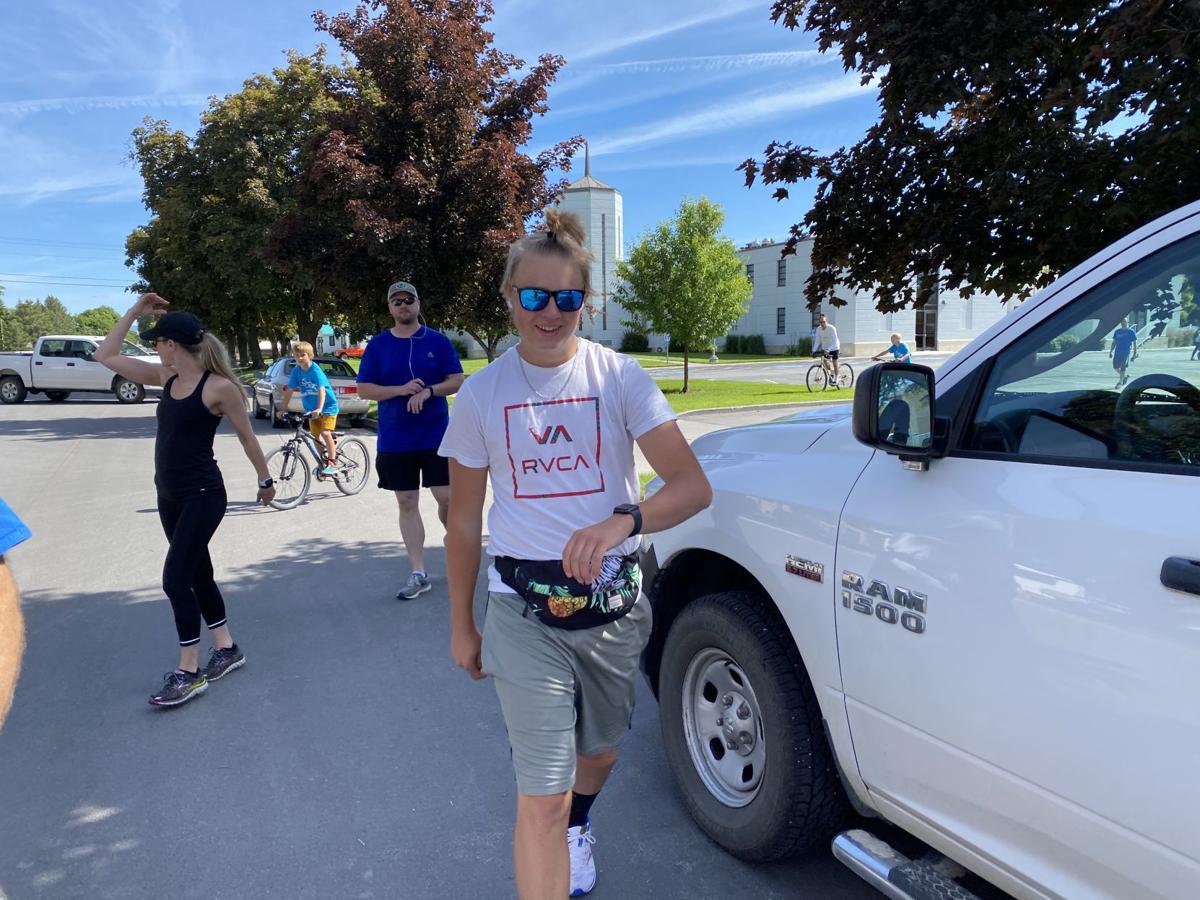 At the start, Jackson gets his watch ready to track his distance. 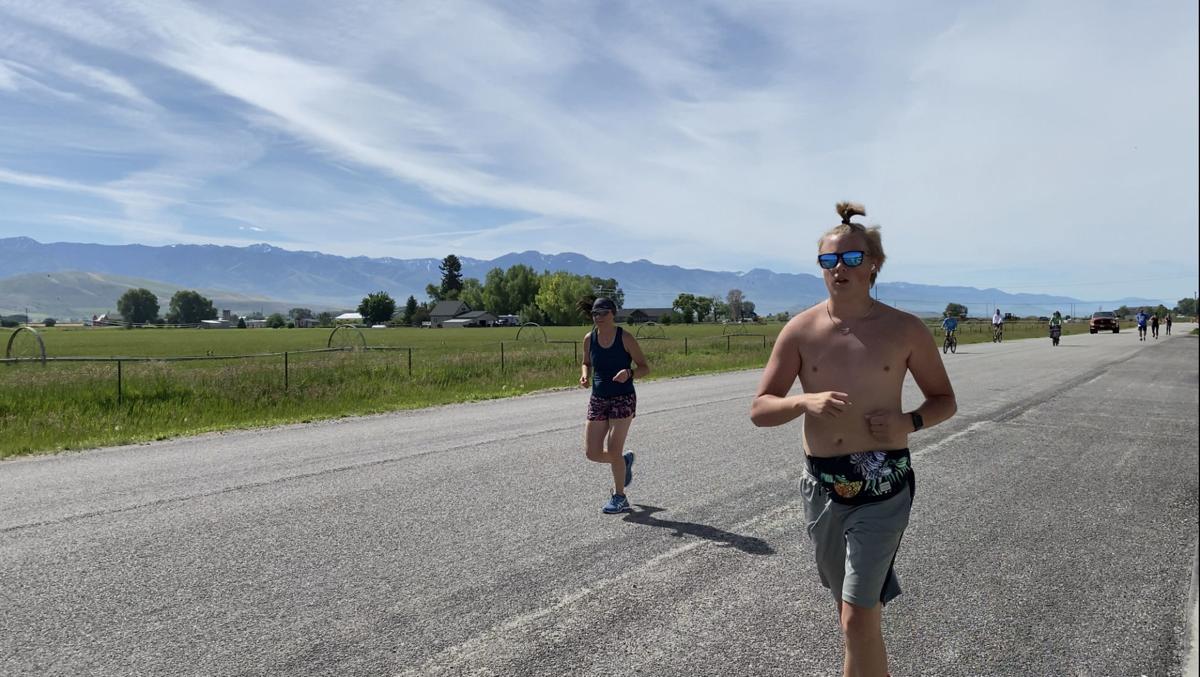 Jackson runs north on 800 East with family and friends supporting him in the background. 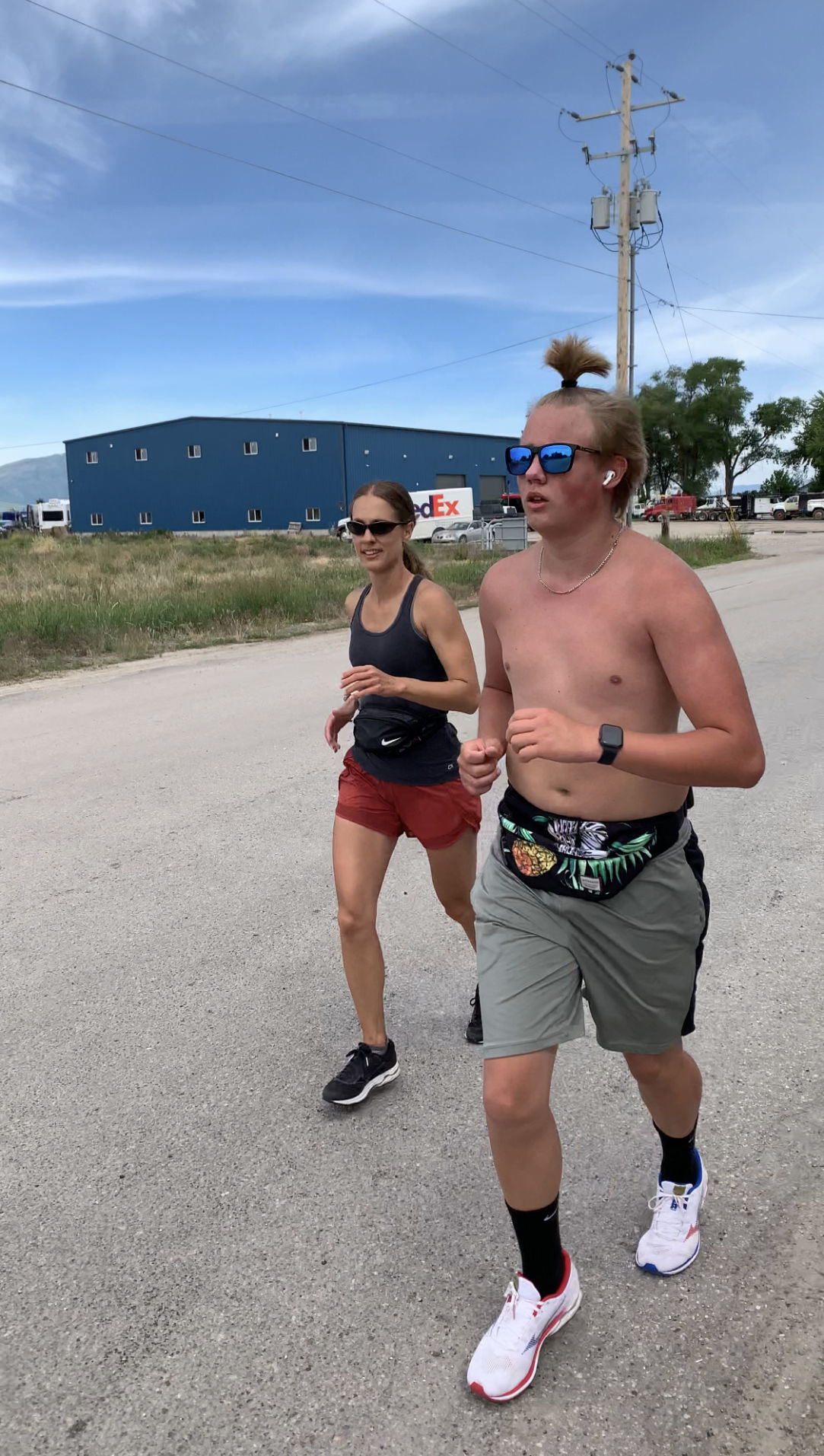 Jackson and his mom Christa Bell. 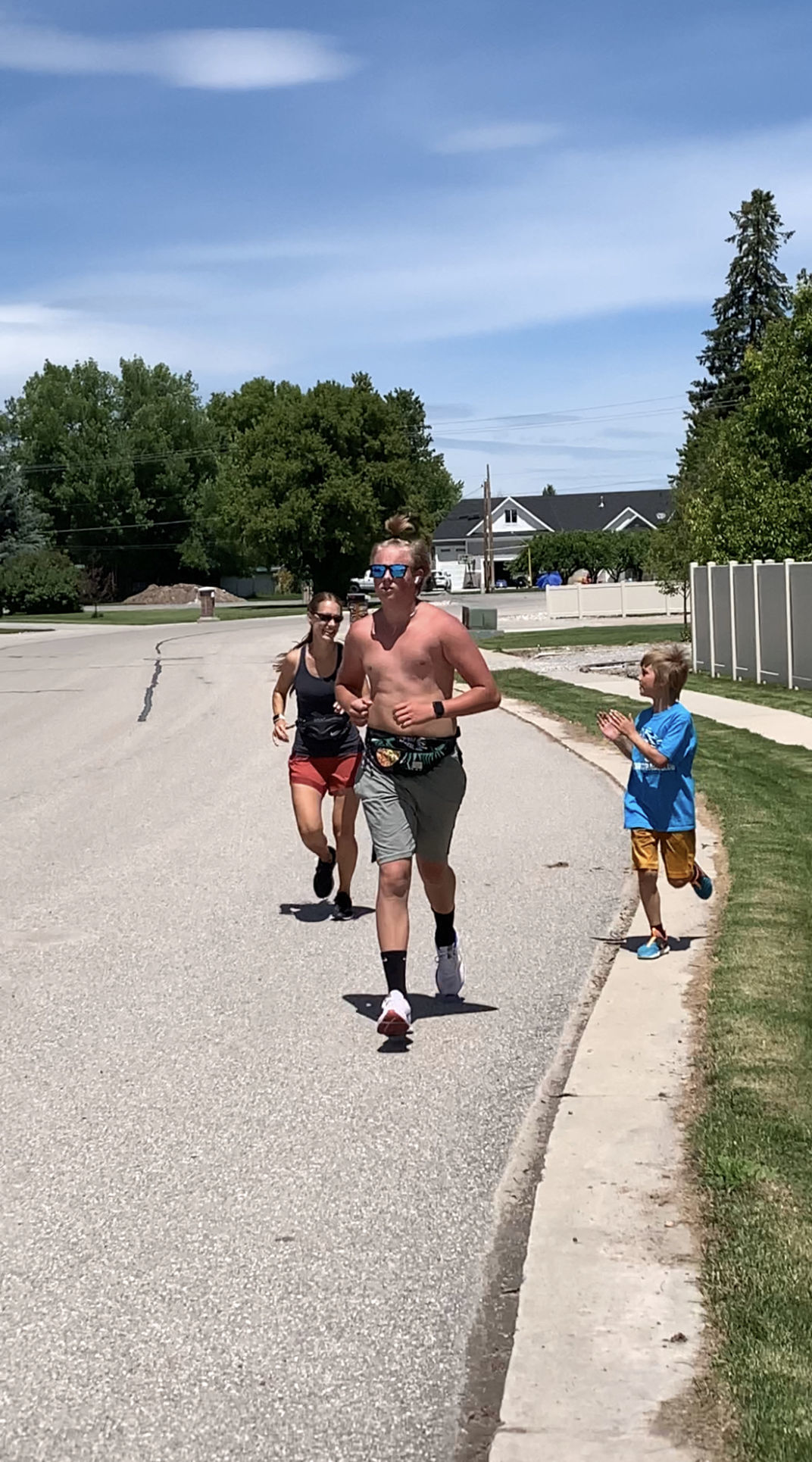 Jack's younger brother, Gary, cheers him in at the finish. 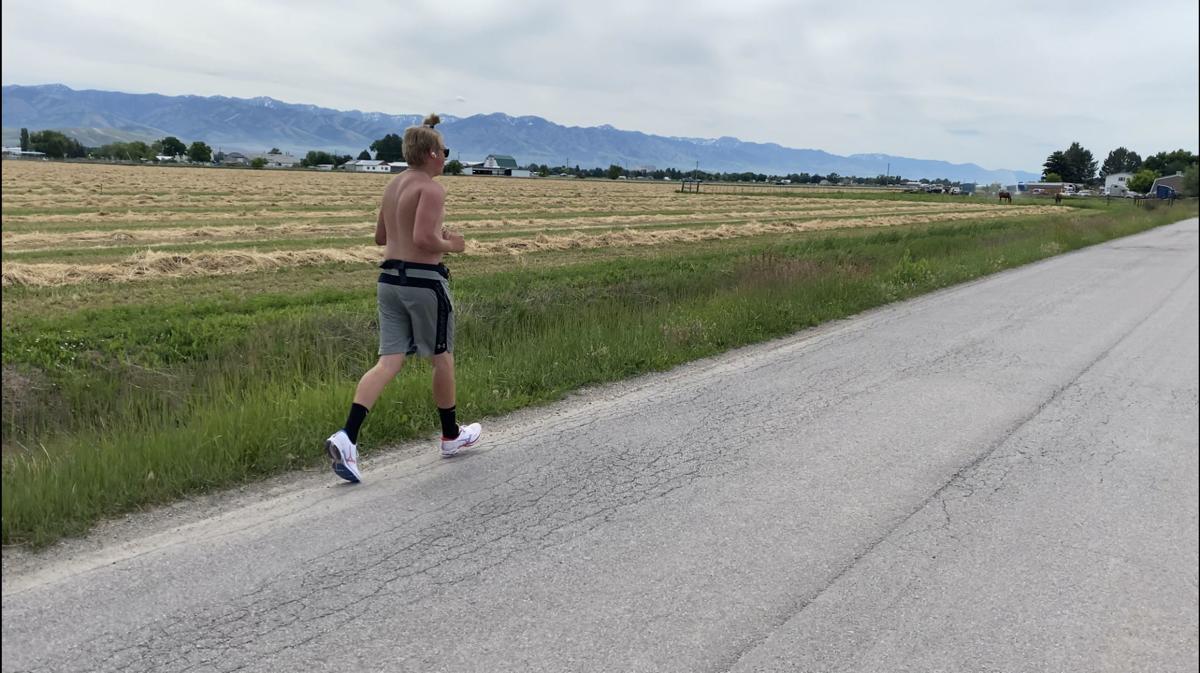 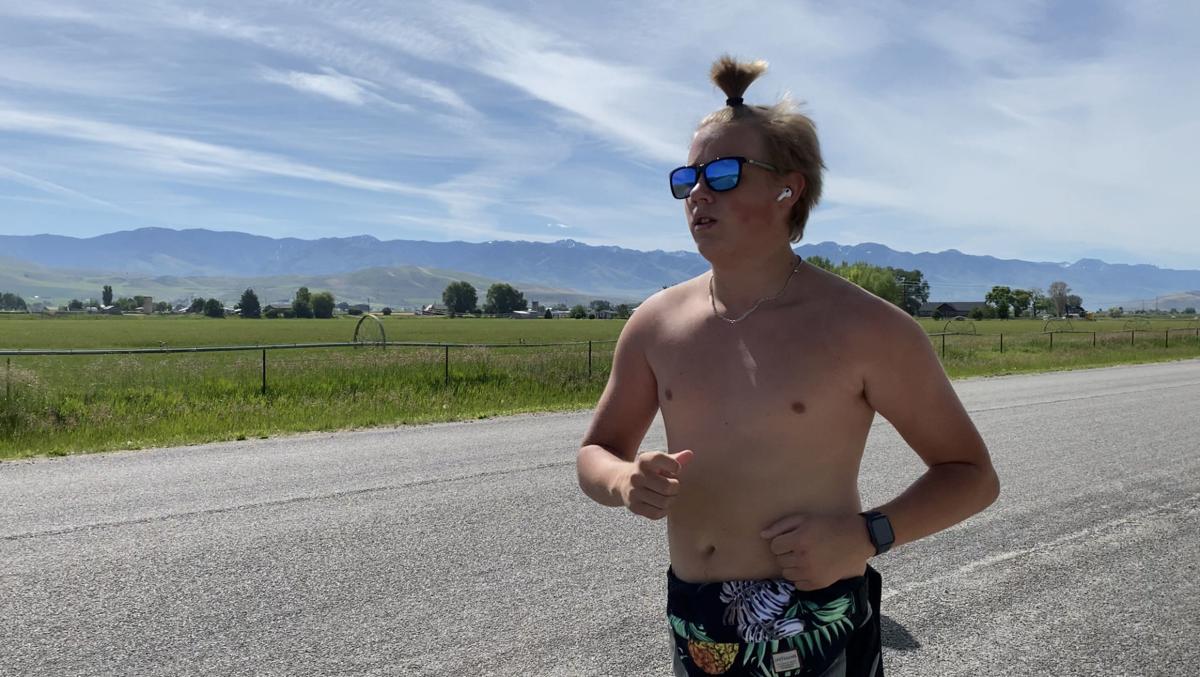 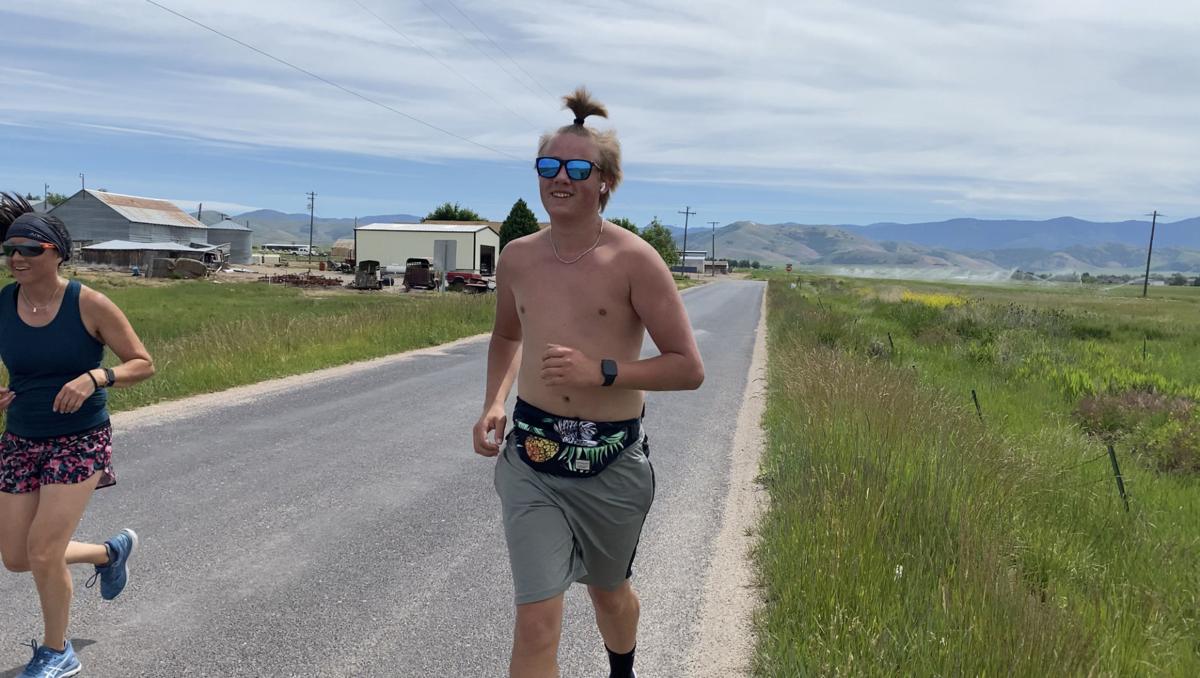 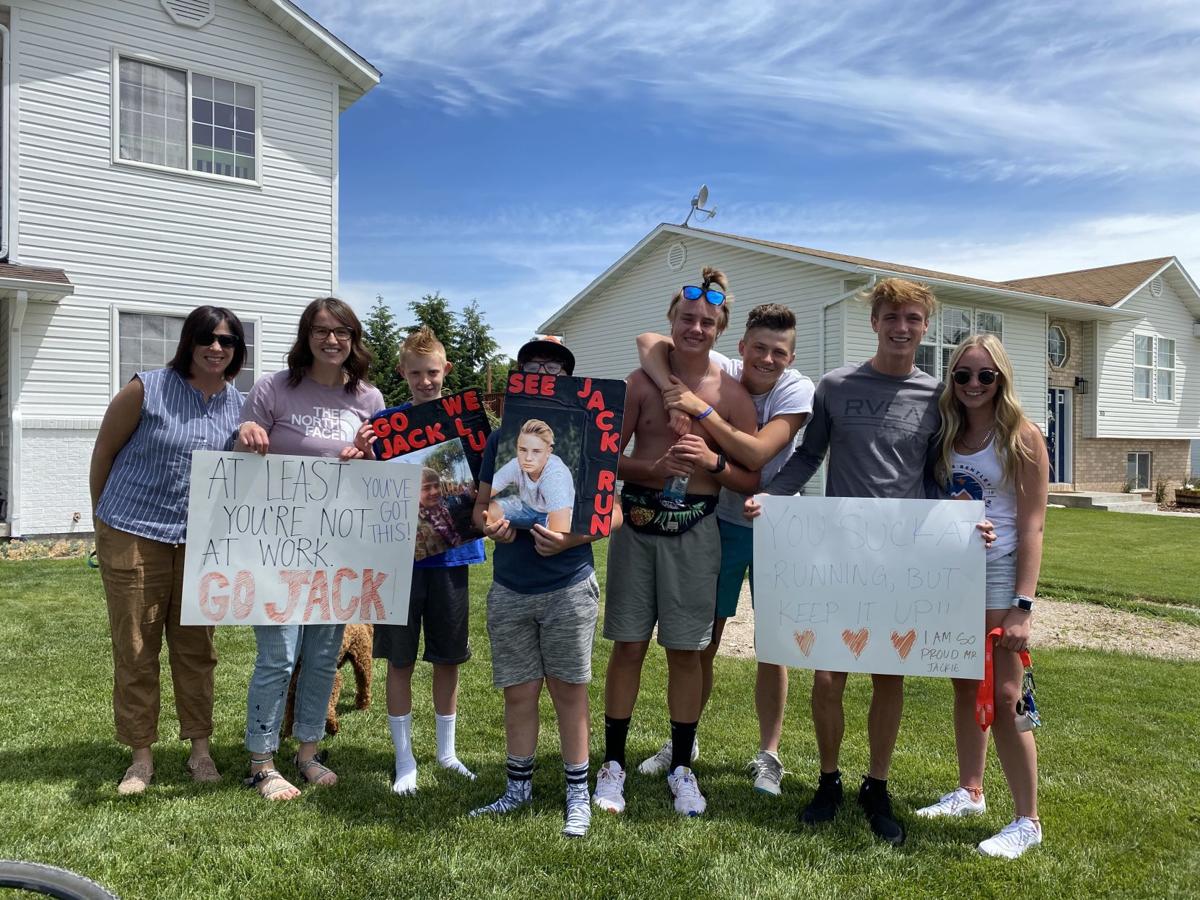 Jackson stops at his friend Daxton Golightly’s house for a quick break after mile 10.

Family and friends show up to support Jack at the beginning of his half marathon.

Jack runs alongside his dad, Ryan, who biked the entire course with him.

At the start, Jackson gets his watch ready to track his distance.

Jackson runs north on 800 East with family and friends supporting him in the background.

Jackson and his mom Christa Bell.

Jack's younger brother, Gary, cheers him in at the finish.

Jackson stops at his friend Daxton Golightly’s house for a quick break after mile 10.

Sixteen year old Jackson Bell completed a large portion of his senior project on Saturday, June 20, when he completed a half marathon hosted by his family and a few friends in Preston.

“Our little homemade half marathon for Jack went amazing yesterday,” said his mother Christa Bell. “He had a lot of support from family and friends, which made it a lot of fun. He also met his goal of finishing the 13.30 mile course in two hours and 20 minutes. I'm so proud of him for achieving this goal. I'm also so thankful for every minute we've spent training together. Those have become treasured memories.”

The victory this step represents for Jack cannot be measured by a time or even by earning a good grade on his project. His victory goes much deeper. His mother noted some of the adversity Jack has faced in the last few years to outline the significance of his accomplishment.

Jack was raised as an athlete and has played sports since before kindergarten. As a high school freshman, Jack was a three-sport athlete (football, basketball, and golf). While playing sports during the spring of his freshman year (May 2018), he broke his back (the L5 vertebra) in two places. He couldn't finish golf season, couldn't participate in summer basketball, and was crushed when his doctor told him that his back would not be healed in time to play football his sophomore year. He spent six months in a back brace that summer and then underwent physical therapy to hopefully rejoin sports by wintertime. He was finally cleared for physical activity in November, only a week before basketball tryouts. Jack tried out for the PHS JV basketball team, but he was cut. Having spent the previous six months healing (and sedentary), he was extremely out of shape, said his mother.

Jack set his sights on getting in shape for football the next fall. He joined Victory Training Academy in Preston and started boxing and MMA training in order to prepare his body for football. He was doing quite well, getting in shape and gaining strength. However, almost exactly a year later, in the spring of his sophomore year, he re-injured his back. An MRI showed a break again in Jack's L5 vertebra as well as a herniated disc right above the L5.

Again, he had to stop all physical activity and wait for his back to heal. At this point, he knew he wouldn't be able to play football his junior year. His doctor told him sports were probably out of the question for the remainder of high school.

"This was so difficult for Jack to accept. After the first injury, participating in sports is what motivated him to work hard and recover. It was much more difficult for him mentally when that motivating factor was lost," said his mother. It has also been difficult for Jack to watch the athletic success of his younger sister Andie, a four sport athlete (soccer, cross country, basketball, and track).

"He is so gracious to his sister, but I know it stings that she gets to do a lot of things that he can't do anymore,” said Christa.

Last fall, although he couldn't play sports competitively, Jack enjoyed being active in his physical education (PE) class. He also began jogging to try again to get back in shape after recovering from the second back injury. But, while playing volleyball in that class, he broke his ankle. He spent six weeks in a boot and on crutches recovering from that injury. Two days after he got his boot off, he broke the same ankle again while helping move wrestling mats in PE. That meant more recovery, and more sedentary lifestyle while waiting for his ankle to heal.

Earlier this year, Jack decided he wanted to run a half marathon for his senior project. He began training slowly, going easy on the ankle and the back to avoid further injury. He registered for the Deseret News Half Marathon and his senior project approved. Shortly after the pandemic began, the Deseret News cancelled its marathon. Still wanting to complete the project, so Jack and his family began planning their own half marathon around Preston. A few family members and friends participated or made signs to cheer him on.

“Running a half marathon is a big accomplishment, and for Jack, it is a symbolic triumph over his injuries that have made the past couple of years so difficult. Jack is ready to go into his senior year putting all of the injuries behind him, and he's ready to conquer this goal. He's not the fastest runner. He still has to take care of his back and his ankle, but his pace is steady and persistent,” said Christa. “I'm so, so proud of him. Jack's high school experience is not going the way he imagined with lots of involvement in athletics, but he is making the best of it. This senior project represents everything that he has overcome.”

For Jack the most difficult aspect of his goal was getting ready. “The hardest part was the training, especially the days that I had to run long runs and then go to work at Big J’s later. On those days, I had to be on my feet all day,” he said.

As to whether he would run another half marathon Jack said probably so, "but not for a long time. One day, I would like to try a full marathon, but I think that it would be very hard.”

An important part of a senior project is growth and Jackson has certainly fulfilled that requirement. “I learned that I can do hard things if I set my mind to it and work for it. My injuries have been really disappointing because I can no longer compete in the sports that I loved to do my whole life. Training and completing the half marathon felt really cool because it showed that my body has recovered. It feels good to move past the injuries and know that I can run a half marathon and accomplish this physical goal.”

Good support has made a world of difference for him.

“I would like to thank my mom for running with me every time, for getting me out of the house and pushing me to go as hard as I can. I would also like to thank everyone who came to support me because it really helped me work harder and go faster. Some of my family came all the way from St. George. I also appreciated the family and friends running and biking with me that motivated me to keep moving.”