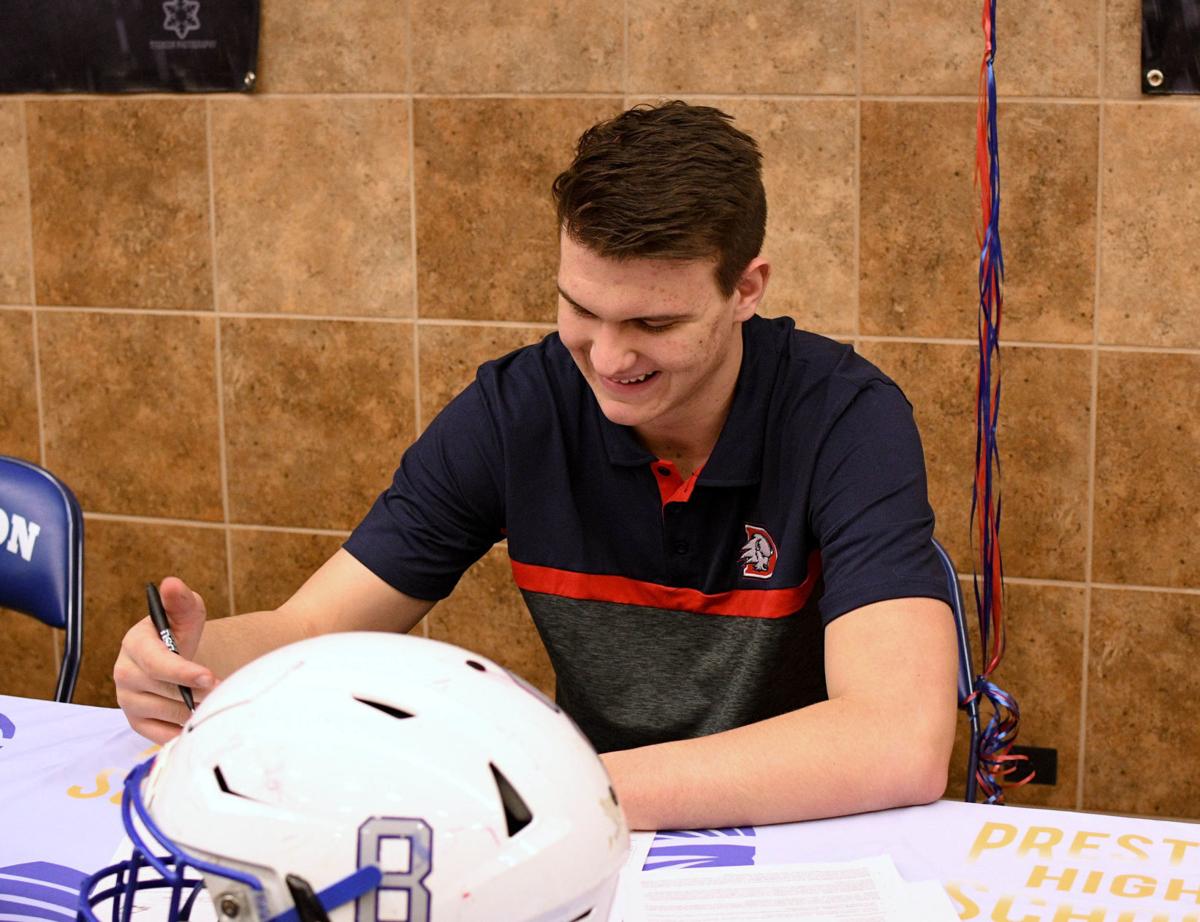 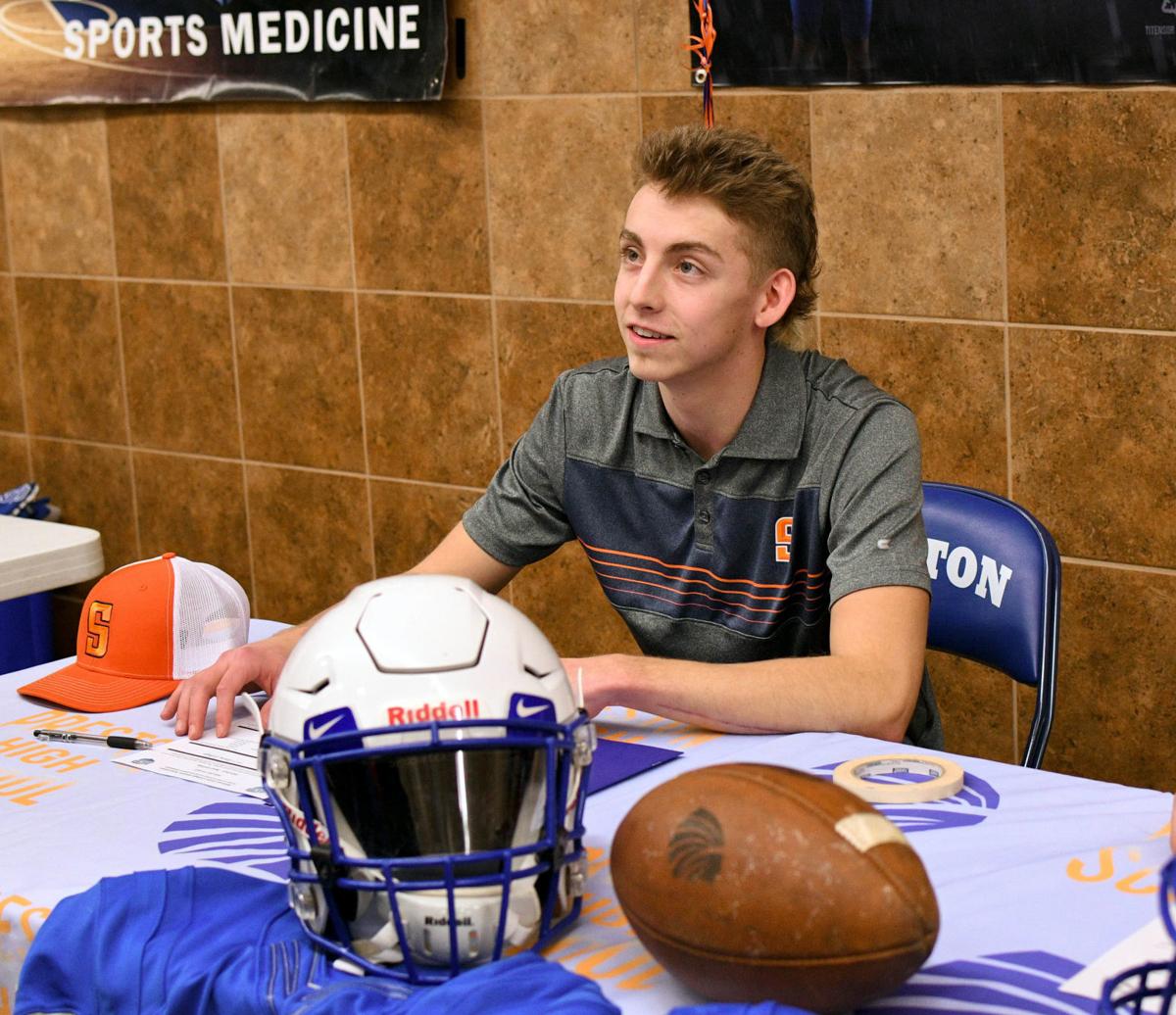 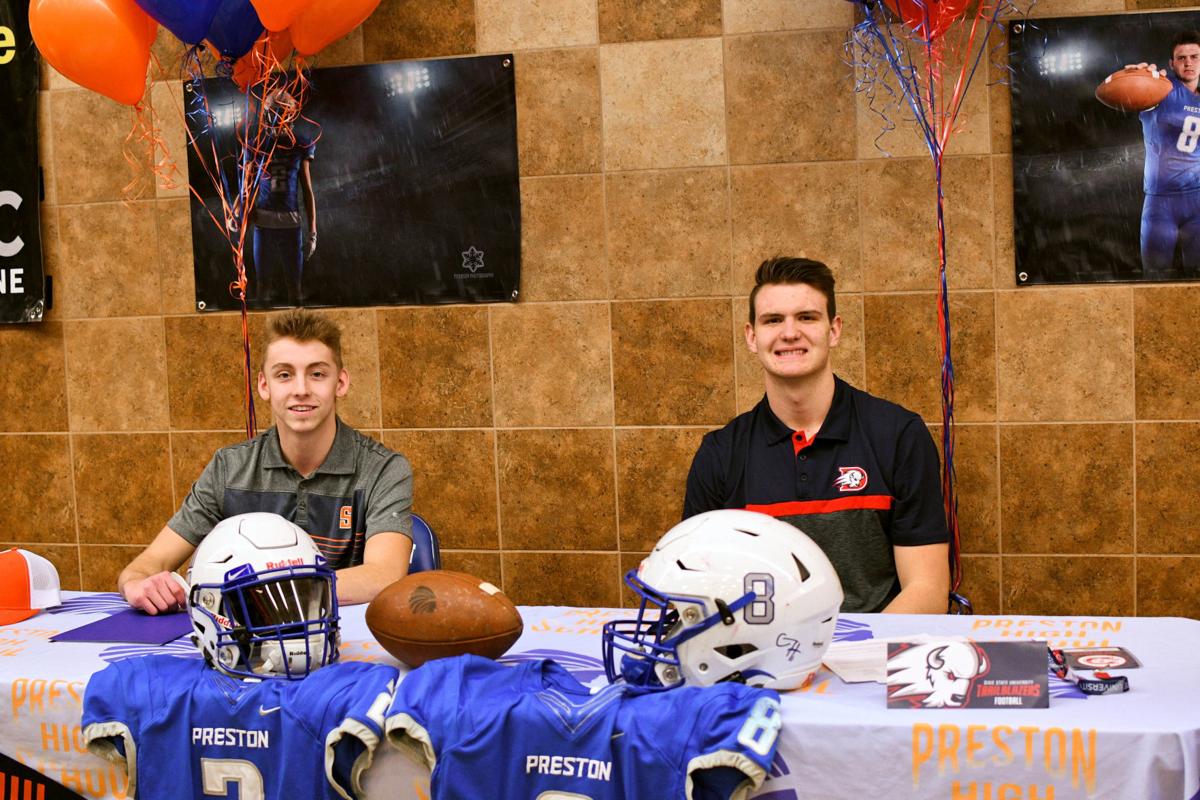 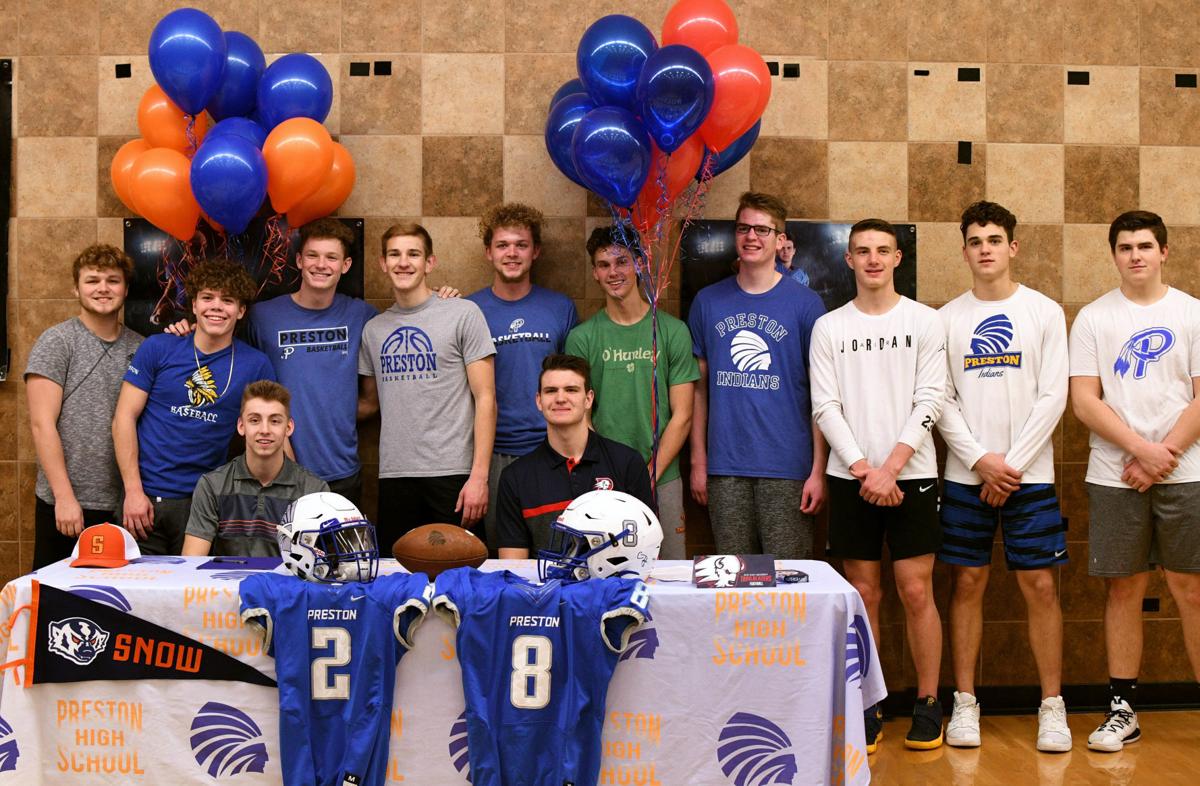 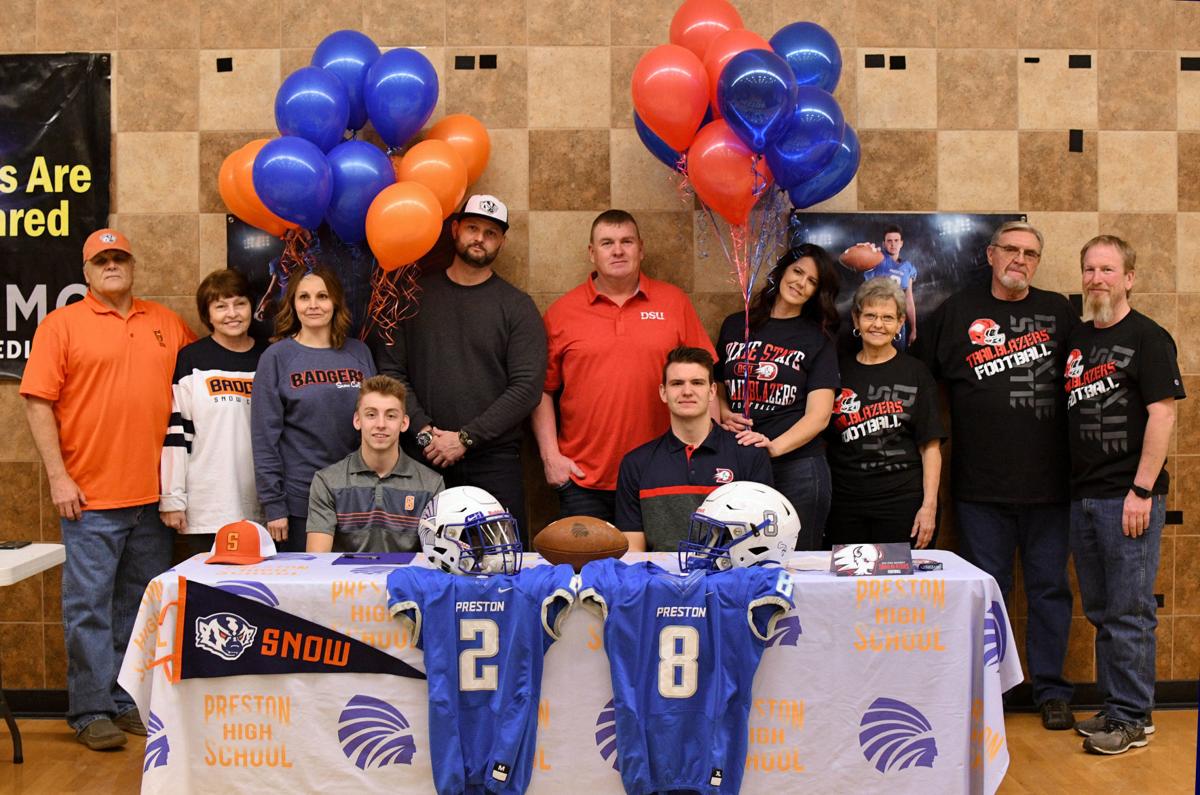 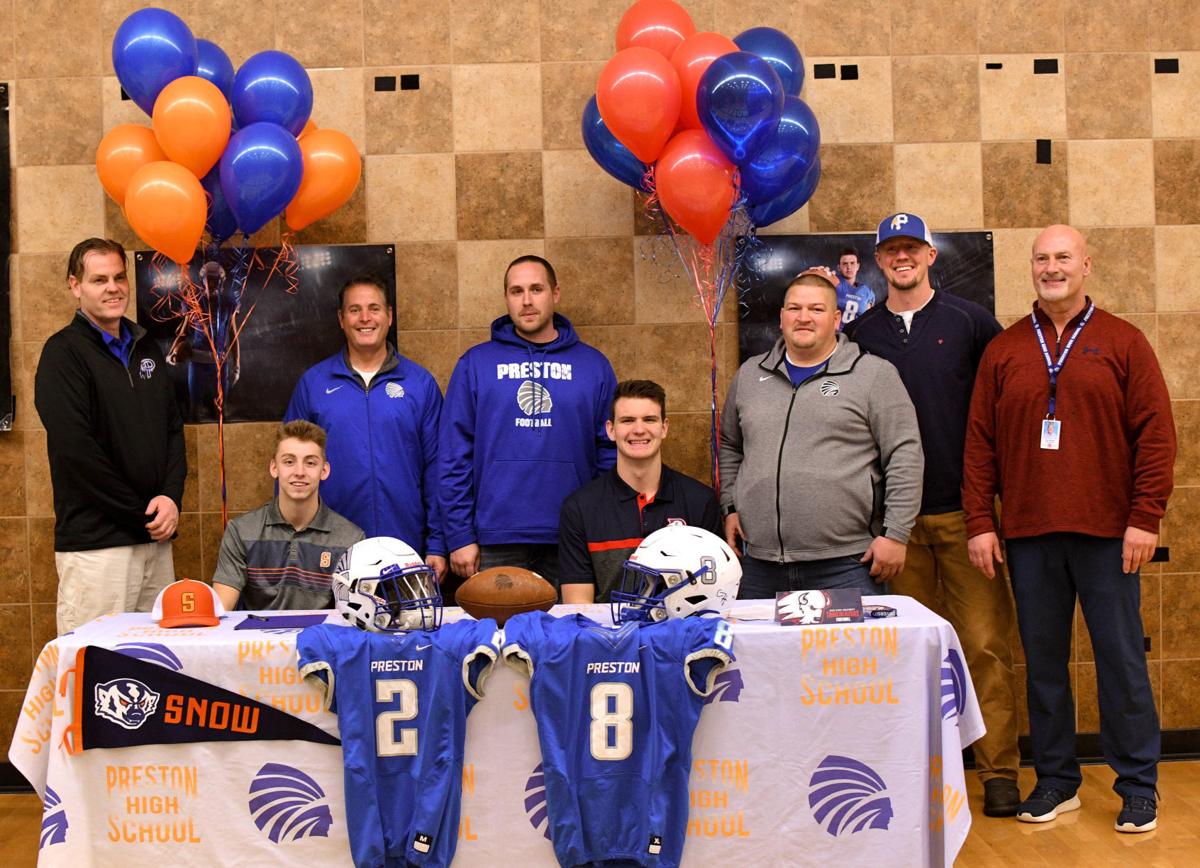 Scott Dunn and Ty Hyde have been playing ball side by side since grade school, so it was fitting the friends take the next step in their football careers sitting next to each other. In a crowded gym, the two signed their letters of intent to play college football surrounded by those who have watched to two young men grow as athletes.

“We can’t express how much we've loved the time we've gotten to spend with them as coaches,” said Eric Thorson, Preston’s head football coach. “We all on behalf of Preston High football are so grateful and congratulate them both.”

Ty Hyde accepted a full ride athletic scholarship to play Division 1 football at Dixie State. Hyde led the conference in passing yards all season and was third in the State. With only two seasons in the quarter back position, no wonder he caught the attention of a division one program.

“It feels amazing,” said Hyde. “It’s crazy that I get this opportunity. It’s a full ride so knowing that my school is taken care of as long as I keep working hard and abide by Dixie’s rules is great, and I will have no problem doing that. I took my official visit and I found I absolutely love Dixie. It all still feels a little bit crazy and I don’t have a lot of words for it yet because I’m still so excited.”

“We are elated for both boys,” said Karie Johnson, Hyde’s mother.

“They have worked hard,” said Tony Hyde, Ty’s father. “I’m proud of them.”

Scott Dunn accepted a full scholarship to Snow College where he will play football and fill one of the receiver potions that are open. Going in a freshman, the coaching staff at Snow expressed the possibility of Dunn seeing playing time.

“I’m super excited about it,” said Dunn. “I’d been talking to the College of Idaho but when Snow invited me to come visit and presented their offer, I met their coaches and toured their facility and school, I knew there wasn’t anywhere else for me. Being a freshman, I know I’m going to have to really work my tail off to get my spot, even with the coaches saying the potential is there for me, it is no way going to be easy. They only have two returning receivers, so they told me they have two spots that are up for grabs. Depending on what they think of me and how I work, I could see some playing time.”

Snow football program is known for being a big recruiting ground for Division 1 colleges, but Dunn isn’t letting that put any added pressure on him.

“The fact that it’s a recruiting place for other schools, that makes it even cooler,” Said Dunn. “It’s not a D1, so it’s more of working into things and going to college. If something like that were to happen then yeah, it would be like a stepping stone, but I feel like this is just the right fit for me. I’m just really excited to get to play and get back out there.”

“We are proud of him,” said Chad Dunn, Scott’s father. “We are glad he has chosen the direction he wants to go in life. He has always worked hard. He has had a lot of people along the way help support him and have his back. To have that injury at the end of the season his senior year, he was determined to come back and play. We love him and are proud of him and we all, his family and the town, wish the best.”

Dunn held the lead in stats in Preston‘s division, even after his injury midway into the season that took him out of the game, until the last few games.

“We are very proud and happy for them,” said Eric Thorson. “It’s exciting. They are both going to programs that are healthy. They both have bright futures and will both do very well. We are thankful for what these two young men did for the football program here on the field and their help and support of those coming in behind them. They are wonderful people and we wish them the best.”