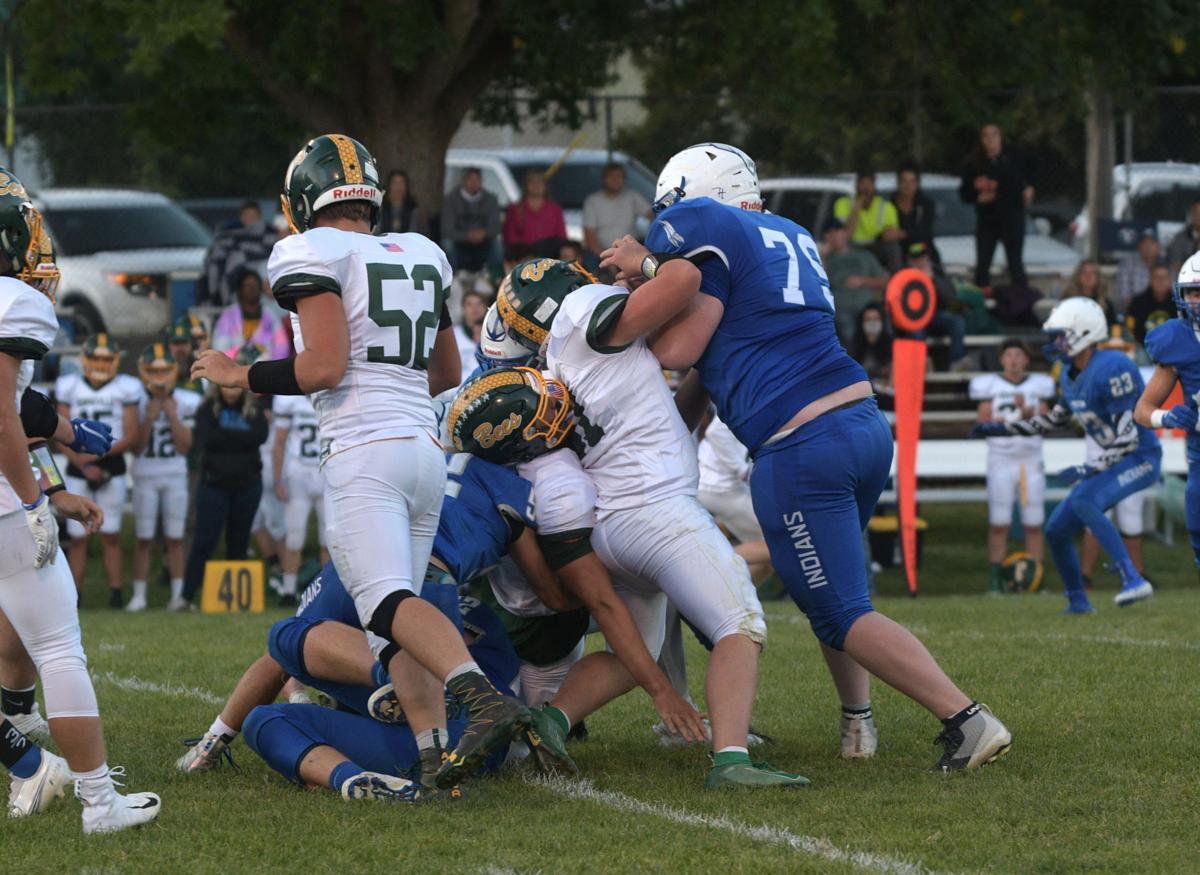 Bonnevilles ball carrier is sandwich between preston's defense and his own blocker at the line of scrimmage. 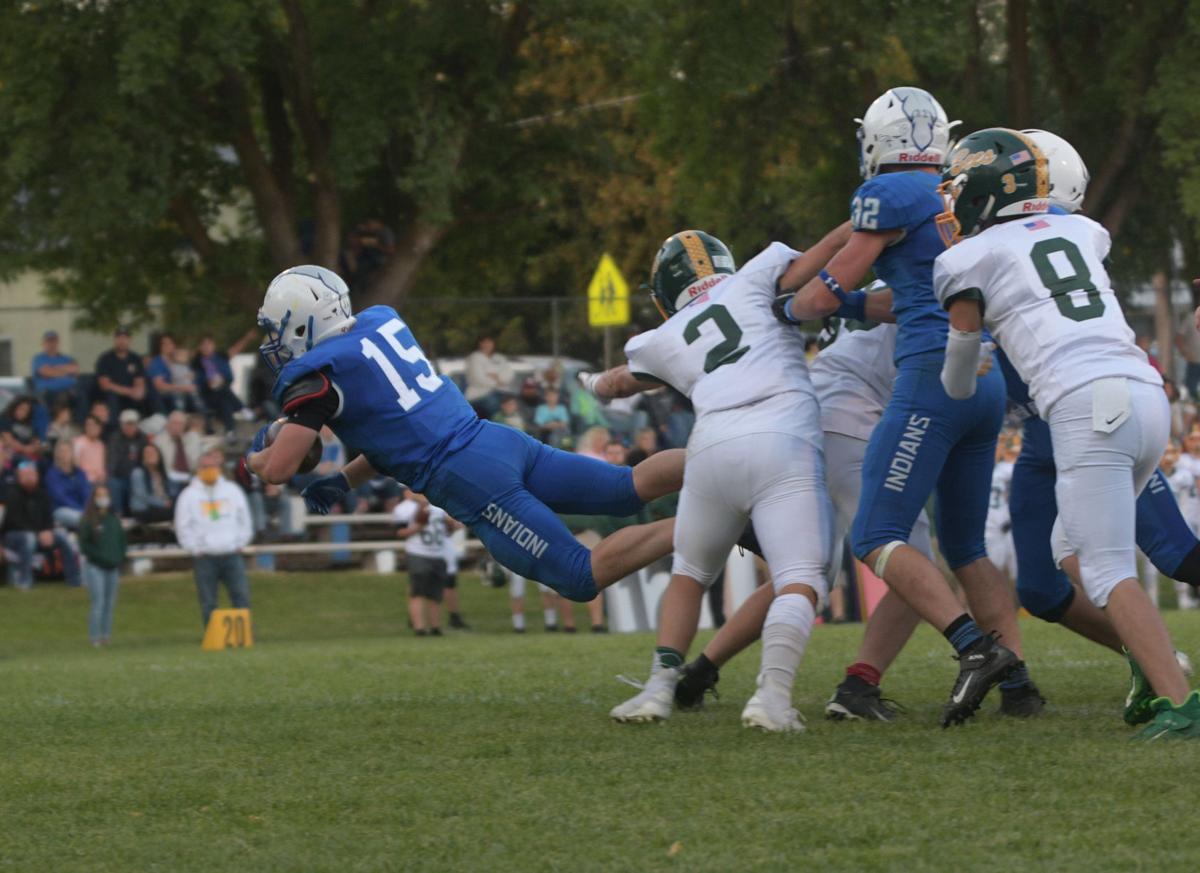 15 slips through the defense and dives for a touchdown. 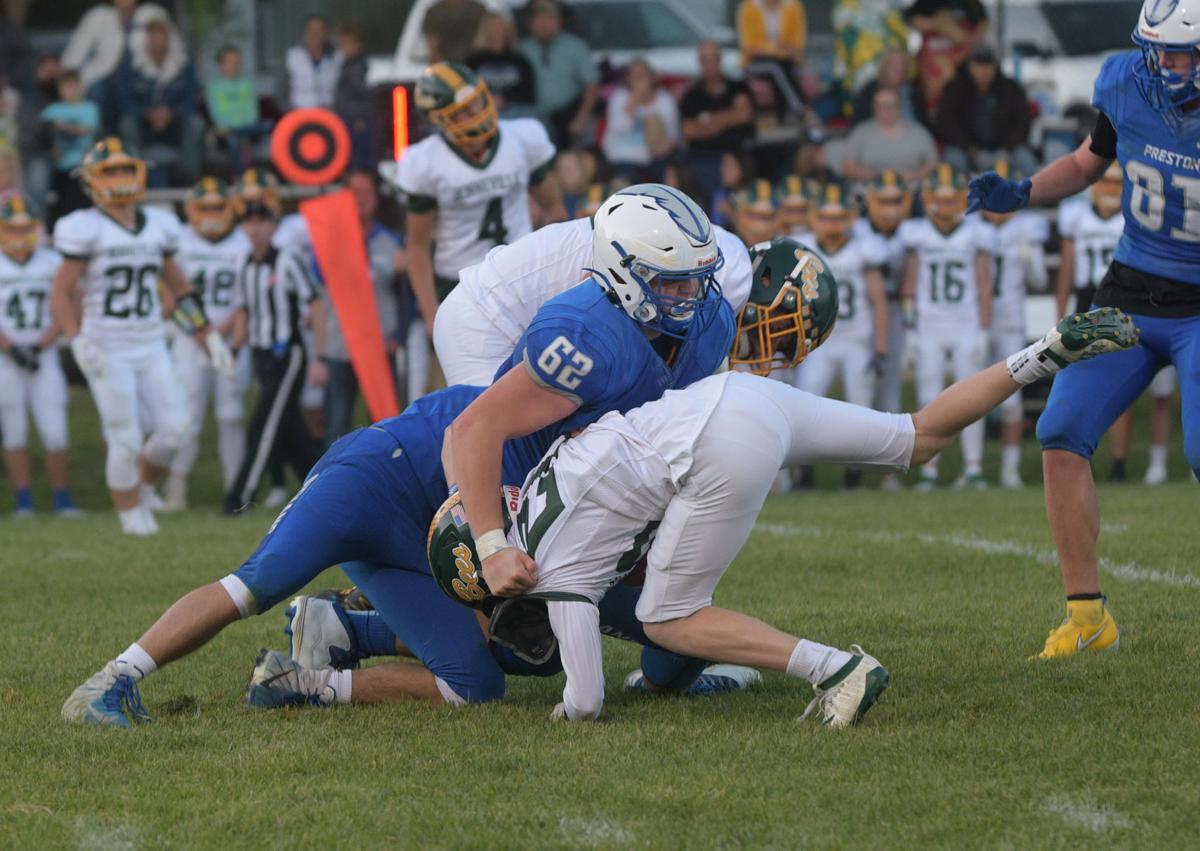 Emery Thorson (#2) carries the ball down the field.

Bonnevilles ball carrier is sandwich between preston's defense and his own blocker at the line of scrimmage.

15 slips through the defense and dives for a touchdown.

Preston Indians dominated on the field last Friday night in their non-conference homecoming game against Bonneville Bees with a score of 49-10.

“The first quarter, our defense led us,” said senior Dom Smith. “In the second half we all kicked it up. We got players in that may not have gotten in earlier. Because of a few injuries, everyone picked each other up and filled in for our brothers. This was one of our best homecoming games we’ve had for a while.”

The first quarter only saw one team score with Bonneville gaining a safety, but Preston took back the game in the second quarter when Brecker Knapp completed a pass to Cole Harris who ran the ball to the 3-yard line. Chuck Iverson ran the ball up the middle for 3-yards and scored. Tait Rawlings made the two-point conversion and put the Indians on top.

“We came out a little slow because a lot of our offense was pretty new,” said senior Matt Jensen. “We picked it up and we got rolling with the system and by the second half we came out flying.”

Indian defense held Bonneville and took back possession on downs. Preston drove the ball down to scoring distance when Bonneville intercepted the ball at the 5-yard line. Indian defense once again only allowed Bonneville to gain a few yards forcing the Bees to attempt a punt on their fourth down. Preston’s Harris blocked the punt and the live ball bounce back toward the Indian’s end zone. Quick on his feet, Harris scooped up the ball and made a touchdown for Preston.

Bonneville answered back and scored at the end of the first half, but Preston still held the lead.

“I think we did pretty good,” said Ethan Pearson. “We started off a little bit rough but we picked it back up in the second half and we took it to them.”

The top of the third quarter and only thee plays in for the Bee’s, Preston’s Davon Inglet intercepted the ball. Iverson once again took the Indians to the 1-yard line and Rawlings scored a touchdown.

Back on defense, Cole Harris caused Bonneville to fumble. Preston’s Hunter Wright scooped up the ball and ran a 60- yard touchdown. The Indians’ final touchdown in the third quarter was made by Tyler Lindhardt with a 28-yard completed pass.

“We played a pretty good defensive game,” said senior Hunter Wright. “We shut them out second half. I mean that is what we’ve got to go and do is play defense and offense will follow.”

“I feel like it was a really good team effort,” said senior Jake Beckstead. “We just need to keep going to keep our winning streak going and hit Blackfoot hard.”

Iverson started the fourth quarter with another Indian touchdown. Preston intercepted another ball on defense.

The Indian defense took the ball back one last time when Bonneville fumbled and Iverson recovered and ran in the final touchdown, ending the game 49 to 10.

“Defense played really well the first half and really sparked us,” said Eric Thorson, head coach. “Bonneville is a young team that had a lot of fight in them. We are always grateful to get a win and hope that we can keep growing from here.”

Preston has a bye this week but will travel to Blackfoot on Sept. 25.