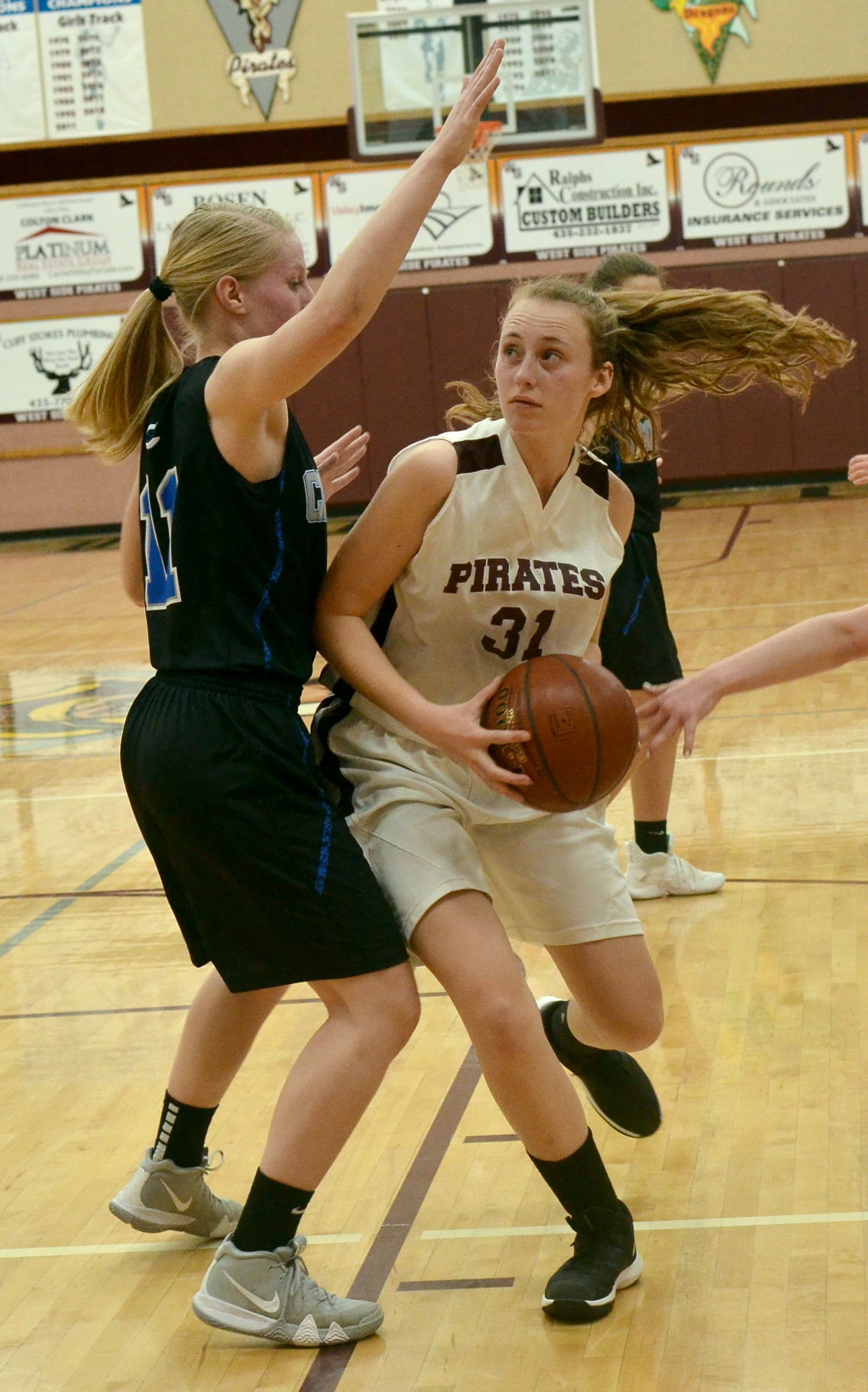 Kajsia Fuller challeges a Firth defender in the paint for a bucket. 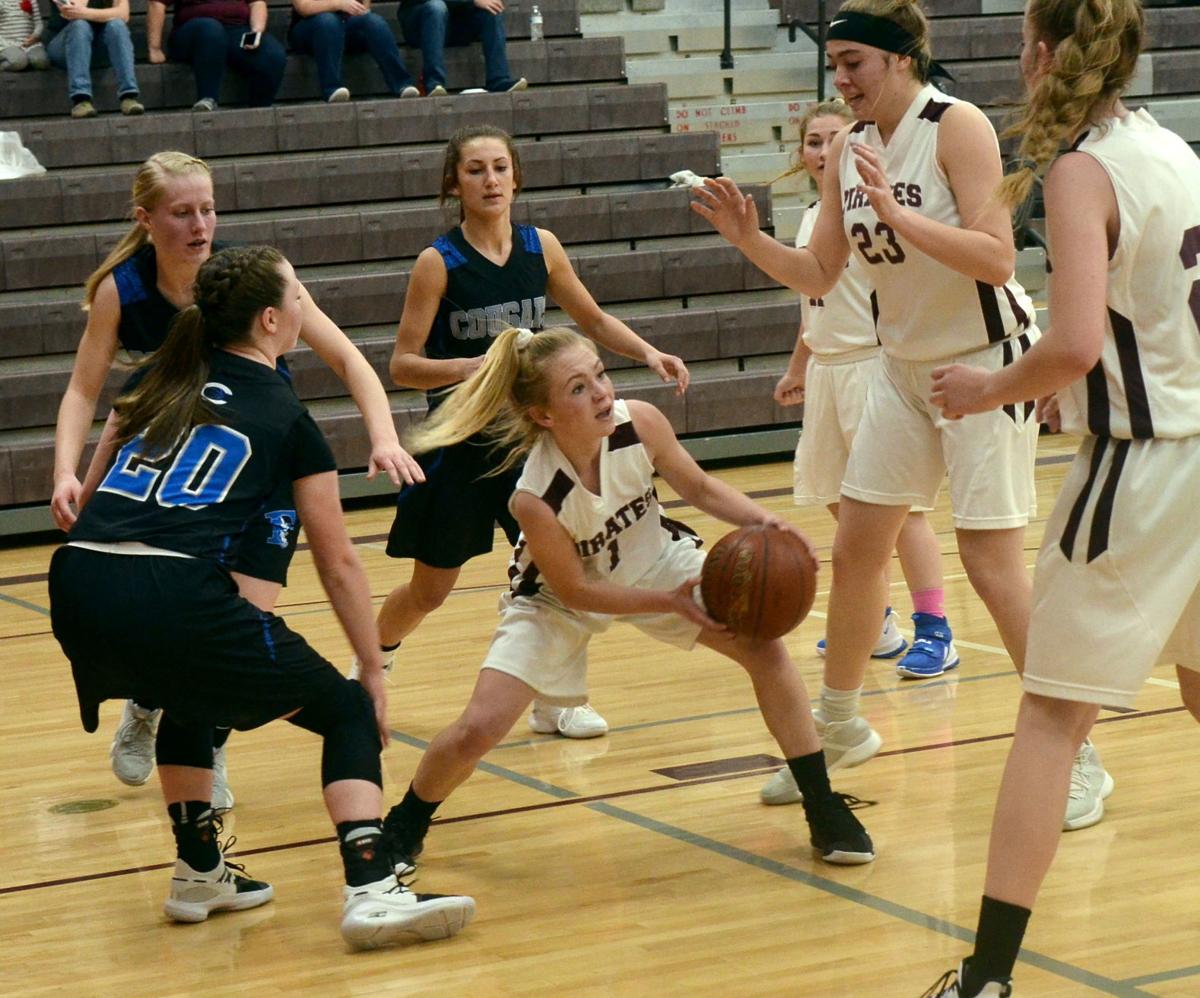 Madalyn Barzee gets the rebound and a basket against Firth.

Kajsia Fuller challeges a Firth defender in the paint for a bucket.

Madalyn Barzee gets the rebound and a basket against Firth.

The Lady Pirates have greatly improved since the beginning of the season. They played tight games against Firth and Rockland last week losing by just a few points. Earlier in the season both teams beat West Side by more than 20 points.

The Pirates travel to Aberdeen tonight, Wednesday, Jan. 8 and host Marsh Valley on Friday, Jan 10. Both games begin at 7 p.m. and JV starts at 5:30 p.m. The confidence and experience they have gained should make a difference in games to come.

Against Rockland on Saturday West Side started off strong. They held a 14-9 lead at the end of the first quarter and were able to take a 21-18 advantage to the locker room.

Rockland evened things up and then pulled away in the second half, but not without a fight from the Pirates. The 43-48 loss was disappointing after their early lead but a huge improvement over their earlier match-up.

“The girls played a very competitive game,” said Coach Bob Sorensen. “We had leads throughout the game. Our defense has created scoring opportunities. Madi (Barzee) scored well off her steals and Kenlee (Nance) was very strong rebounding and scoring there. Kajsia (Fuller) continues to dominate inside. She is scoring even with double teams being placed on her. The girls are getting so close to getting a win. I am so pleased with the progress that these girls are making.”

Kajsia Fuller led the team with 17 points followed by Kenlee Nance with 13 and Madalyn Barzee with eight. Timberley Dean and Jocie Phillips added two each and Natalie Lemmon one.

At home against Firth on Thursday the Pirates stuck with it till the end and even led in parts of the game. Unfortunately, foul trouble put Dean, Barzee and Phillips on the bench more than Coach Sorensen would have liked and both Dean and Barzee fouled out in the fourth quarter. Phillips and Lemmon were playing less agggressive with four fouls each.

After leading by two with just over six minutes to go West Side went cold and allowed Firth to take the lead. The Pirates had to foul to regain possession and Firth pulled away handing West Side a 48-42 loss.

“The game showed some even scoring from multiple players,” Sorensen said. “Our defense is getting much better. We are still trying to become more aggressive and getting into the right spots. I am happy with how the girls are starting to see each other on offense. We are still trying to learn how to win but we are getting closer. Our rebounding is much better. We missed a few put backs that could have given us the lead. Kajsia and Kenlee are really doing good things under the basket. Madi and Chloe (Keller) had good game from the perimeter. Jocie is getting stronger leading this team.