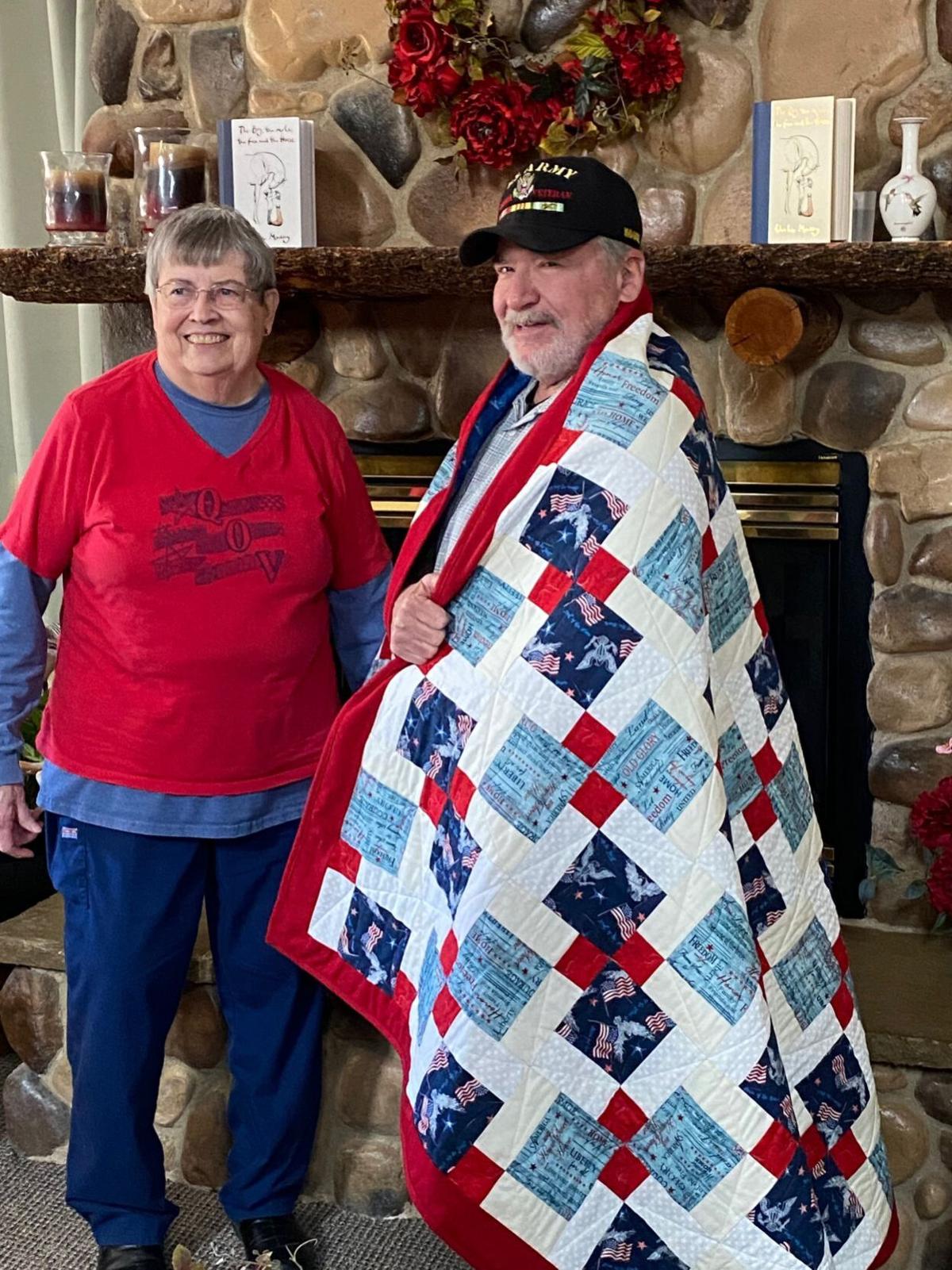 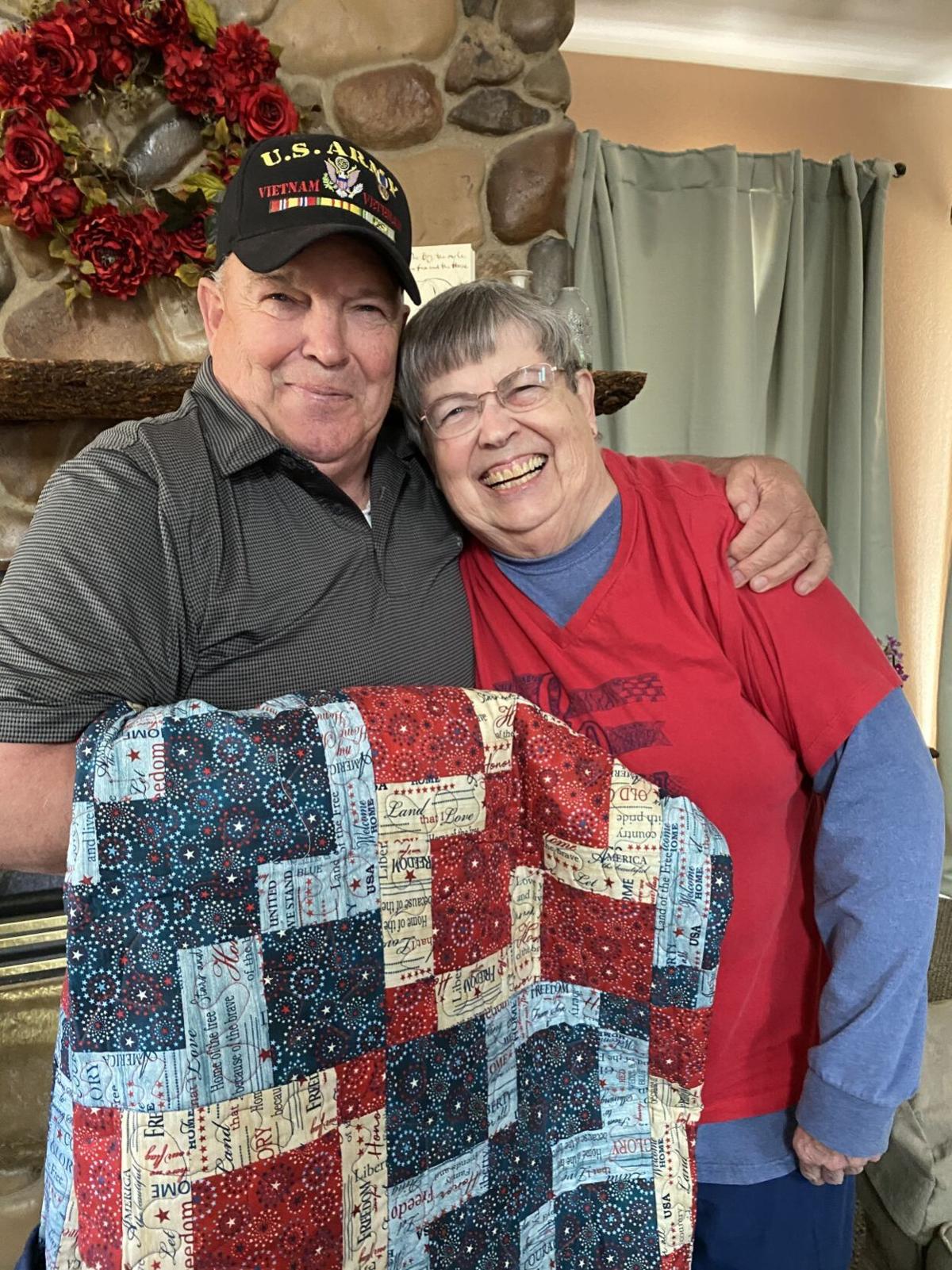 Dennis DeeRay Jensen and Charles “Randy” Moore, both veterans of the Vietnam War, were honored recently for their service in the Vietnam War with a “Quilt of Valor.”

Jensen, who served from 1967-1970 as a helicopter gunner and crew chief on a UH1 Huey Gunship, and who received two purple hearts, lives in Preston. Moore, of Clifton, was a radio communication specialist who would be dropped by helicopter to find soldiers in trouble, fix their radios, then would be picked-up to do it again. Both men were exposed to Agent Orange — a poisonous weed killer used in warfare. “That’s why we have no children,” said Moore’s wife, Lynn.

The quilts, which were made by people in the Southeastern Idaho area who love veterans, were received with much emotion, said Lynn.

“It was hard for Randy. He did two tours in Vietnam. Until recently, the only people that would always shake his hand, even bow their heads to him, were people from Laos, Cambodia, Vietnam. They always told him, ‘Thank you for saving our country.’ When Randy came home, the first lady that came up to him, asked if he was coming home from Vietnam, then she spit on him, and called him a baby killer. That was the last thing they were trying to do. They were there to try to stop communism,” said Lynne. “People don’t realize that freedoms are bought ... for him to see that someone else cared enough to make this beautiful quilt for him, that doesn’t even know him ... he was thrilled to tears.”

For Dennis, receiving the quilt was very healing. The first thing he noticed was the feeling of warmth and of being covered, protected, as it was draped around his shoulders.

“The idea that someone would do this, and that they would care ... it heals the heart,” said Jensen, who was 18 when he was shot down behind enemy lines. He and a dozen other men were the only survivors of a group of 700 on 100 aircraft which were ambushed and shot out of the sky, he said. He still lives with the pain of a shattered pelvis from that experience, and like Moore, has dealt with the long-term organ-killing effects of Agent Orange.

Each quilt has a butterfly stitched somewhere within, “to represent a new light, a new beginning,” said Jensen. The quilt is “like a cocoon of love,” said Lynn. “I’ll tell you, a lot of Vietnam veterans need it,” Jensen said. Many have never healed from the horrors they experienced followed by the animosity they faced as they returned home.

The Quilts of Valor also include a panel with the veterans’ name.

Another helpful experience for these men has been participating in an Honor Flight. “It was an eye opener to me,” said Jensen. Both men appreciate the efforts that have been made in recent years to express appreciation where it was so woefully lacking at the end of the Vietnam War. “There was a lot of hate,” said Jensen, who appreciates programs such as these.

Both Jensen and Moore said they joined the military to serve in the war because they wanted to help prevent the spread of communism. So when the United States pulled out of Vietnam, it was heartbreaking to them to see the aftermath. “The country had droughts for 13 years after we were there. ... communism moved back in. People who taught school were killed. Anyone who was smart at all was killed. They put children in charge. Families were torn apart. There’s a lot of things that happened to those people after we left,” said Jensen.

“I did what I did because of what I believe. Now look at us today,” said Jensen. The Moores feel the same.

The quilts were presented to the men by Mimi Jones, the Eastern Idaho Coordinator of the nationwide Quilts of Valor program. She is from Idaho Falls. Afterwards, they stayed for lunch at the Moore residence; they came as strangers and as friends, said Lynn.

Nominations for veterans to receive a quilt can be made by anyone, said Lynn, who said she has forms for those who are interested. And anyone can help with making the quilts. “Randy’s was made by a gentleman who lives in Chubbock. His wife did the binding and another lady did the quilting,” said Lynn. Jones made Jensen’s quilt.