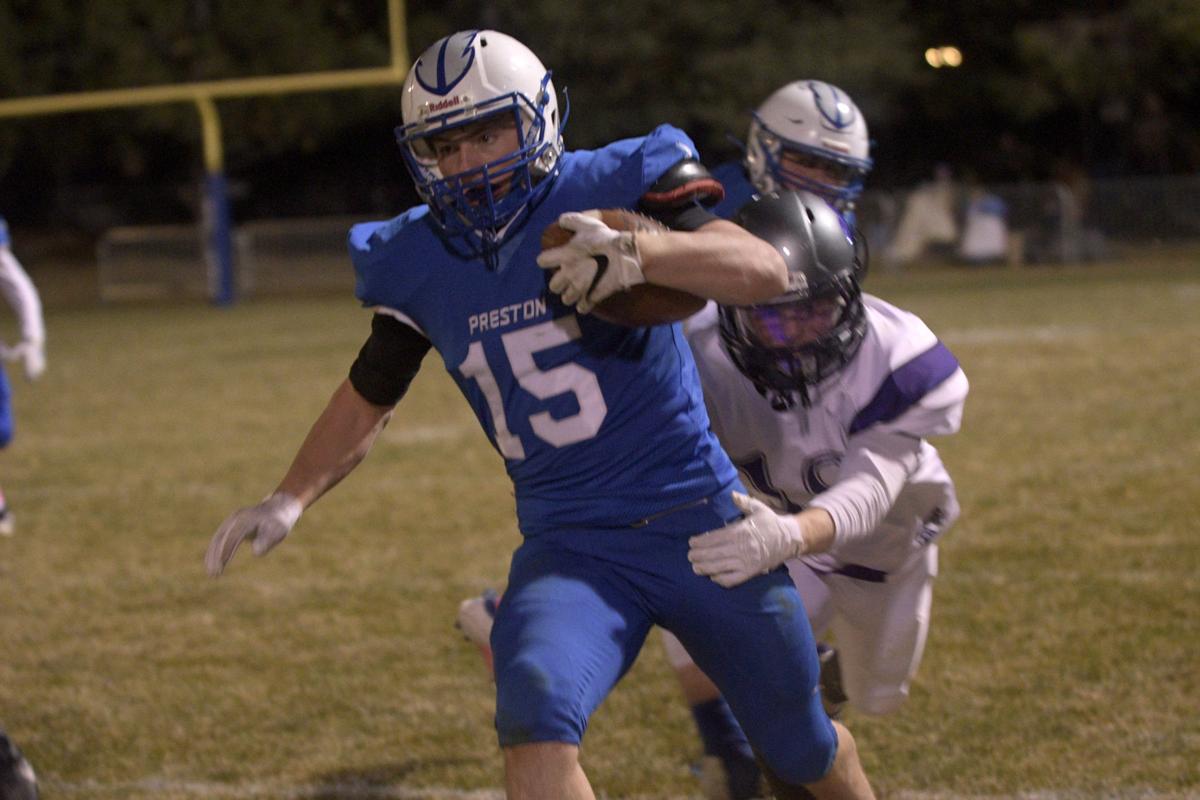 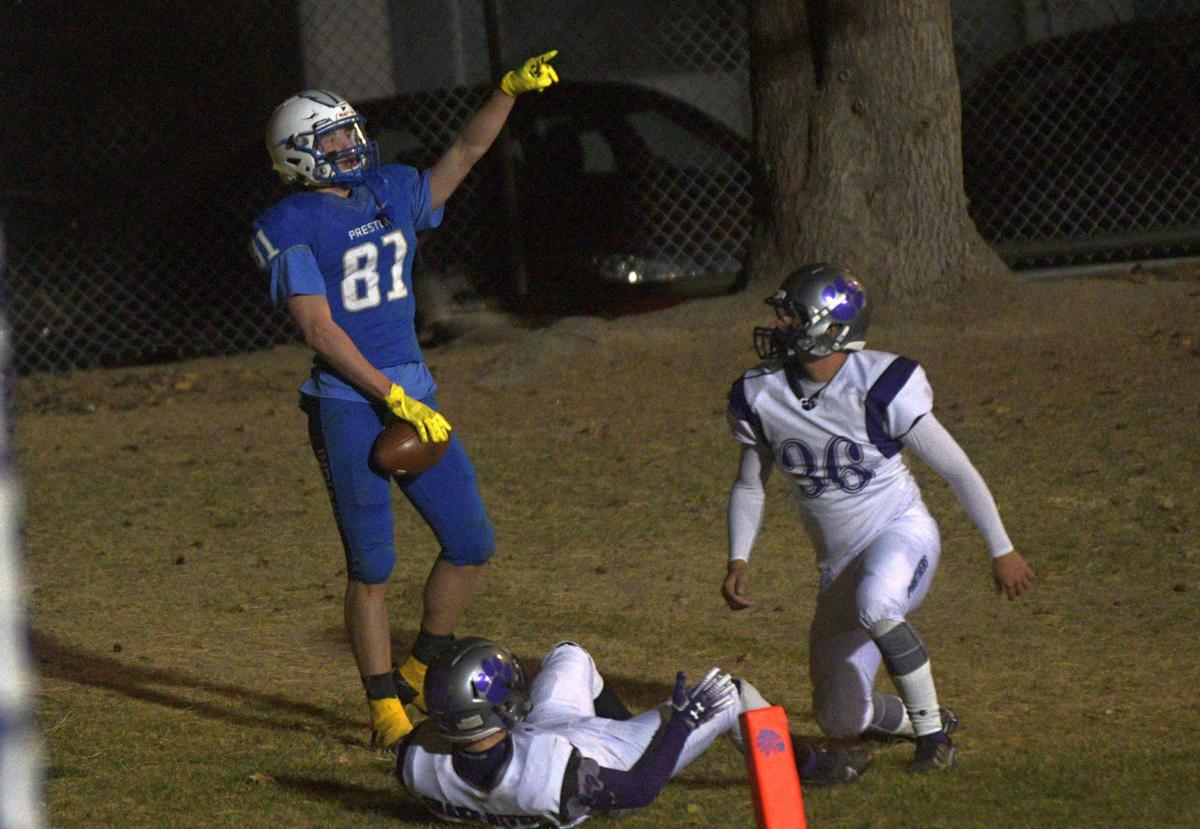 Cole Harris celebrates his catch for a touchdown against Snake River. 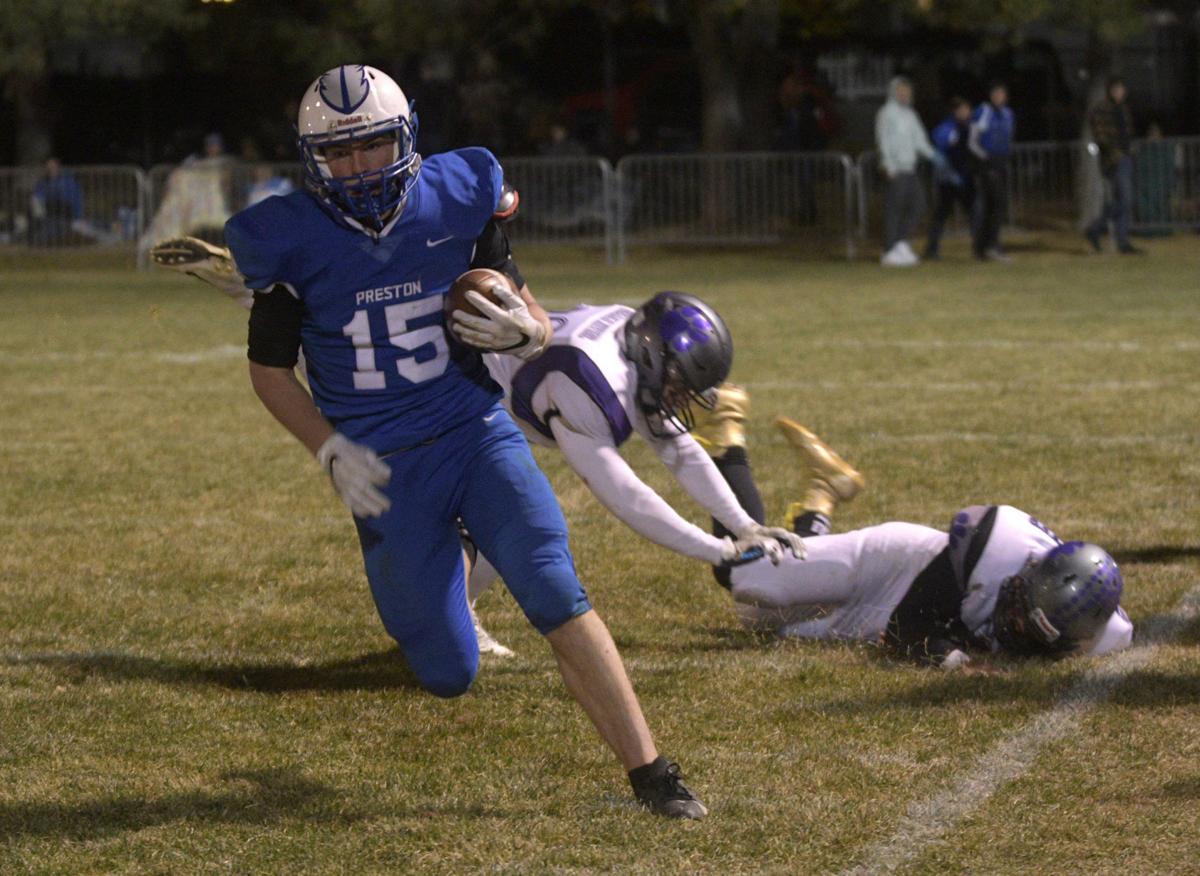 Charles Iverson leaves his opponents in the dust on his way to a 75-yard touchdown. 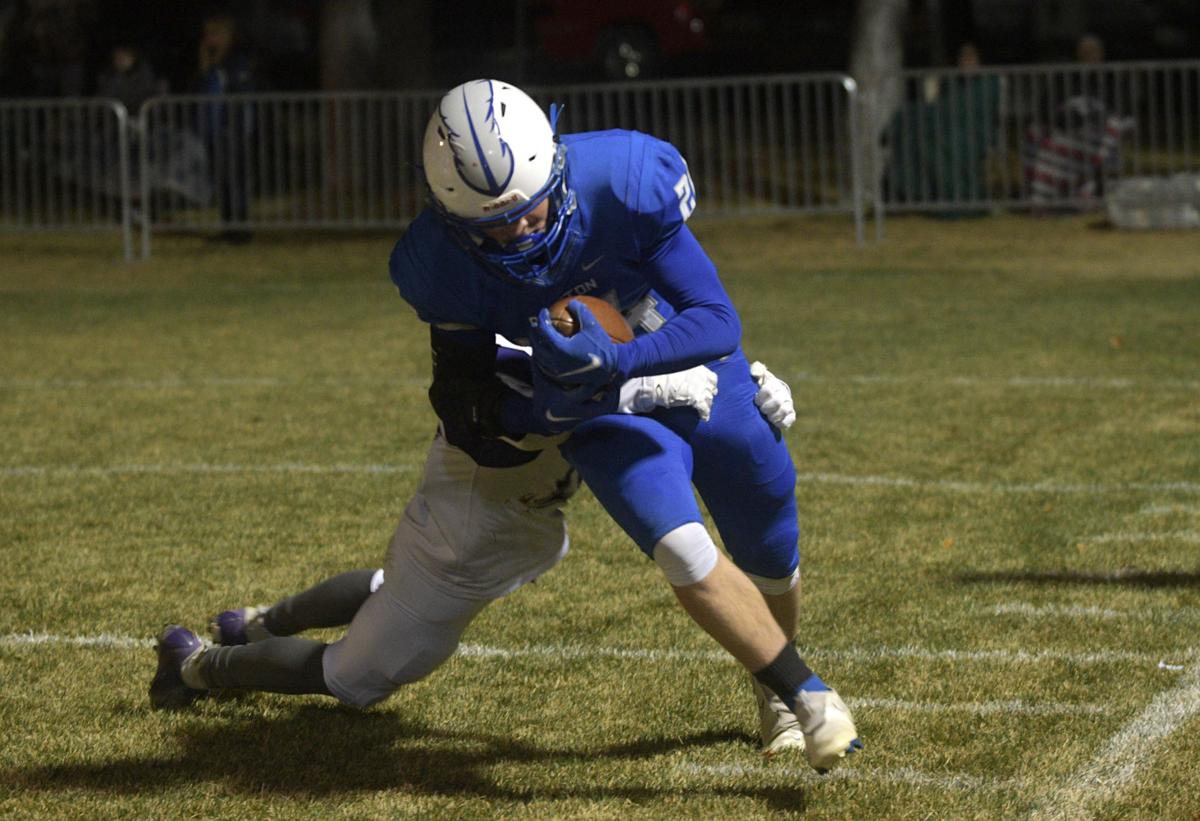 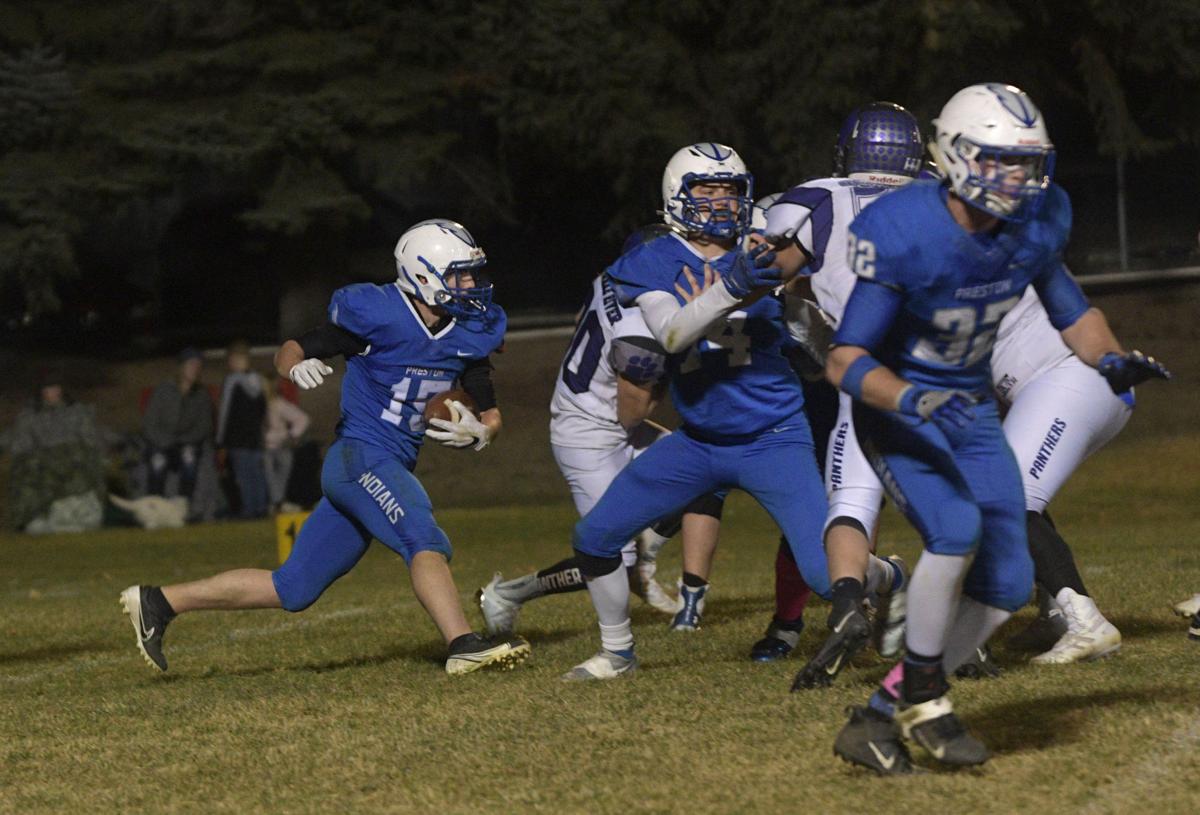 Charles Iverson carries the ball behind the blocks of Tait Rawlings and Ethan Pearson. 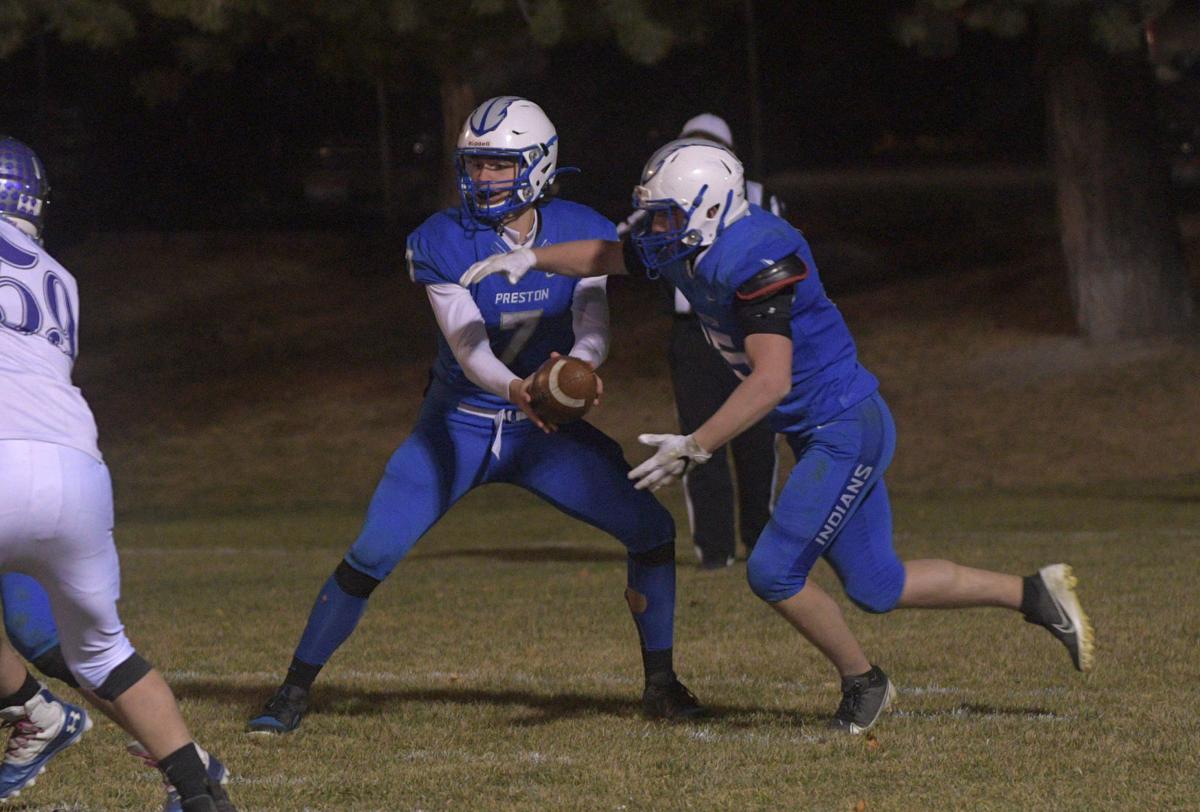 Brecker Knapp hands off to Charles Iverson for yardage. 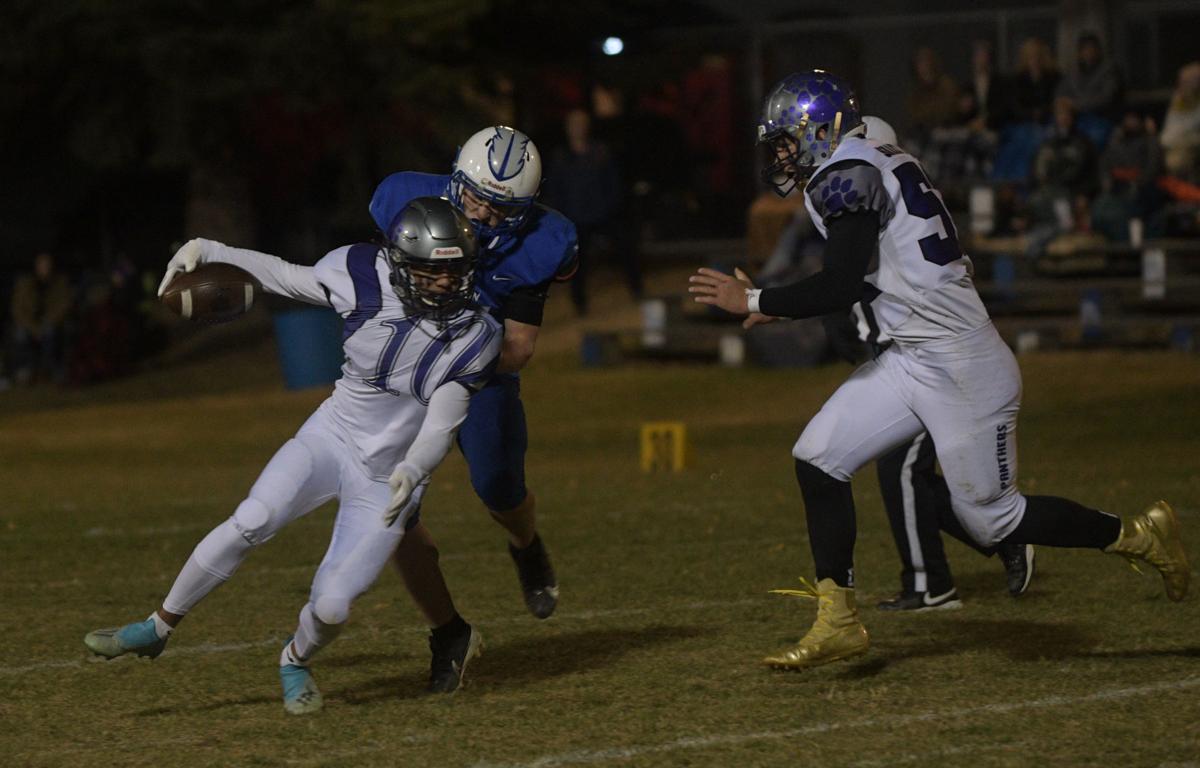 Charles Iverson takes down Snake River in the backfield for a loss.

Cole Harris celebrates his catch for a touchdown against Snake River.

Charles Iverson leaves his opponents in the dust on his way to a 75-yard touchdown.

Charles Iverson carries the ball behind the blocks of Tait Rawlings and Ethan Pearson.

Brecker Knapp hands off to Charles Iverson for yardage.

Charles Iverson takes down Snake River in the backfield for a loss.

The Preston Indians dominated with their home field advantage and celebrated Senior Night last Friday when they hosted the Snake River Panthers with a much-deserved victory of 21-7.

Fourteen seniors stepped out on the gridiron for the last game of the season and their senior night. They were ready to experience their last game together as a team that had played together since grade school. Senior night is a tribute to those players’ dedication and participation throughout the season as a final farewell. 2020 senior night carried more weight than most years, with the class of 2021 losing their junior year in spring sports, they appreciated the sentiment this ceremony gives regarding closure.

Preston kicked off the game by keeping Snake River’s offense to four downs and out. The Indians first quarter touchdown drive began at the 40-yard line. Brecker Knapp completed to Cole Harris then to Tyler Lindhardt. Preston’s offensive line pushed Snake Rivers’ line back and made a hole for Chuck Iverson to bulldoze ahead 18-yards. A few plays later Knapp completed a touchdown pass to Justin Inglet.

In the second quarter Preston’s defense dominated the game. Harris and Inglet executed a high-powered sack against Snake River. Tait Rawlings and Rhett Larson performed a stop against the Panthers that pushed the ball back 10 yards. On offense Hunter Wright completed a 28-yard pass and Harris completed as well.

The second half led off with a drive as Knapp completed to Inglet followed by a first down pass to Lindhardt. The drive ended with a 75-yard-touchdown run by Iverson.

Preston’s defense once again held the Panthers with the help of a big stop from Ethan Pearson. Snake River turned the ball over after four short downs.

Back on offense Knapp completed a 32-yard pass to Inglet. Knapp followed up with a quarterback keeper and rushed the ball. The drive ended with a completion to Harris for a touchdown

In the fourth quarter Indian defense once again impressed the fans with heavy-hitting stops from Rawlings, Josh Read, and Larson. The crowd was brought to their feet when Read tipped the ball and Harris was able to pick off Snake River’s quarterback Cole Gilbert.

“I feel the team played well and I’m really excited for them to get this win,” Preston head coach Eric Thorson said. “It just feels great knowing our players bring their best in the face of the unknown, whether we get to the playoffs or not. On our returns tonight, Cole Harris is such an outstanding player. We love him and the things he does because he always gives 100% and he makes the most of our kick returns. We also had a couple new blocking schemes put in to help Iverson get to the outside and we feel it worked out very well.”

Brecker Knapp completed 12 of 18 passes for 167 yards. Knapp threw touchdown passes of 7 and 22 yards to Justin Inglet and Harris. The catch by Harris was on a fourth-and-goal play.

“Obviously, it feels a lot better to get a win, especially at home in front of our fans,” said Brecker Knapp. “It is also bitter sweet. This is the last time we get to play with these senior guys. They were good examples and taught us a lot that we can take on with us.”

Snake River’s only score came on a touchdown pass from Cole Gilbert to Trey Poulton in the second quarter.

“We definitely had chances to win the game, but I thought the Preston kids were hungrier,” said Snake River coach Jeb Harrison, whose Panthers clinched a district title last week against American Falls. “They needed the win, and our kids were kind of flat.”

The Indians found out on Sunday they did not receive an at-large bid to the 4A state playoffs. District 4 has an automatic three-team placement in the seeding. Unfortunately, Preston got bumped out, even though they are ranked in the top 16 4A teams — an unfortunate casualty of being in region that only has three schools representing a conference.