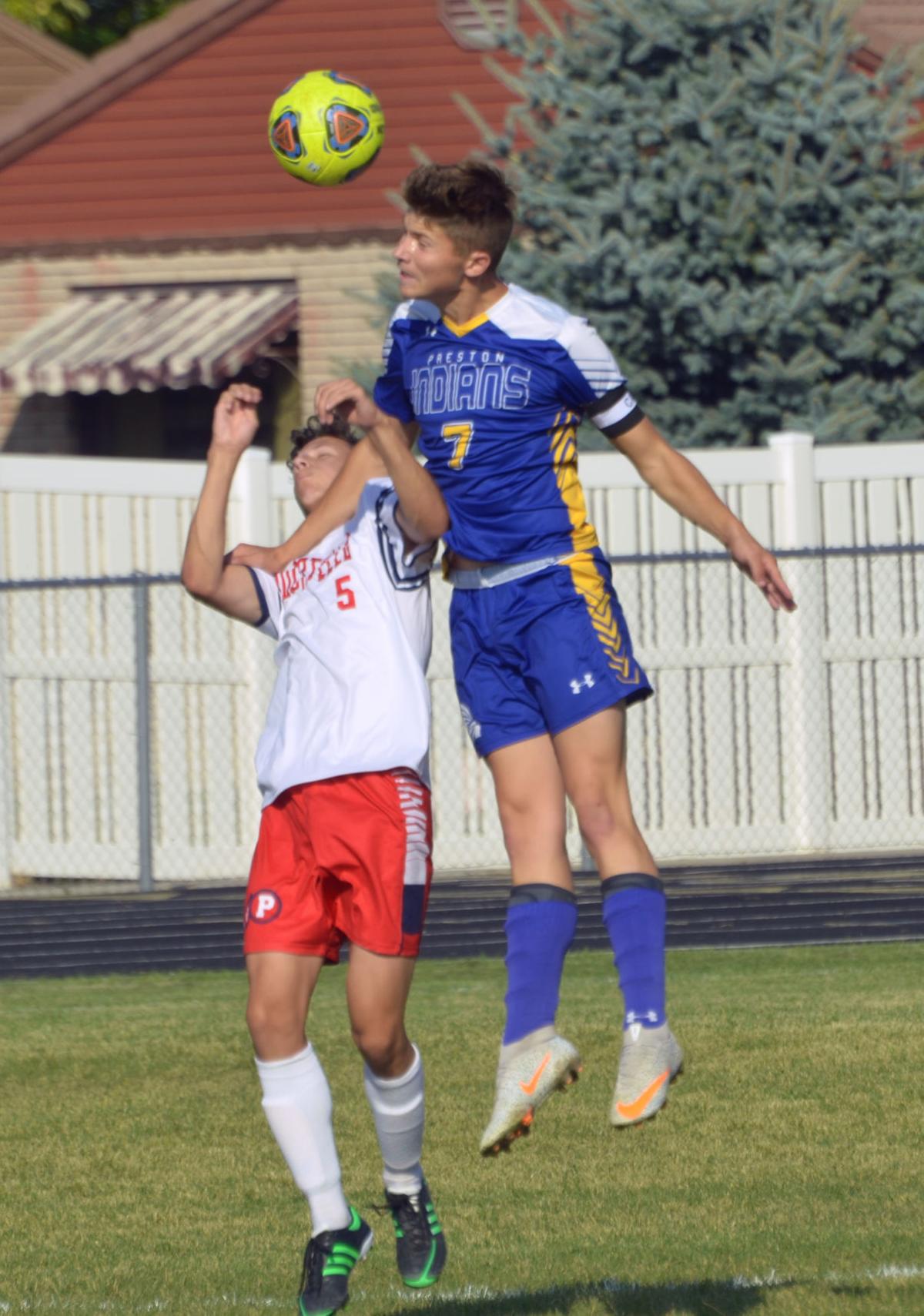 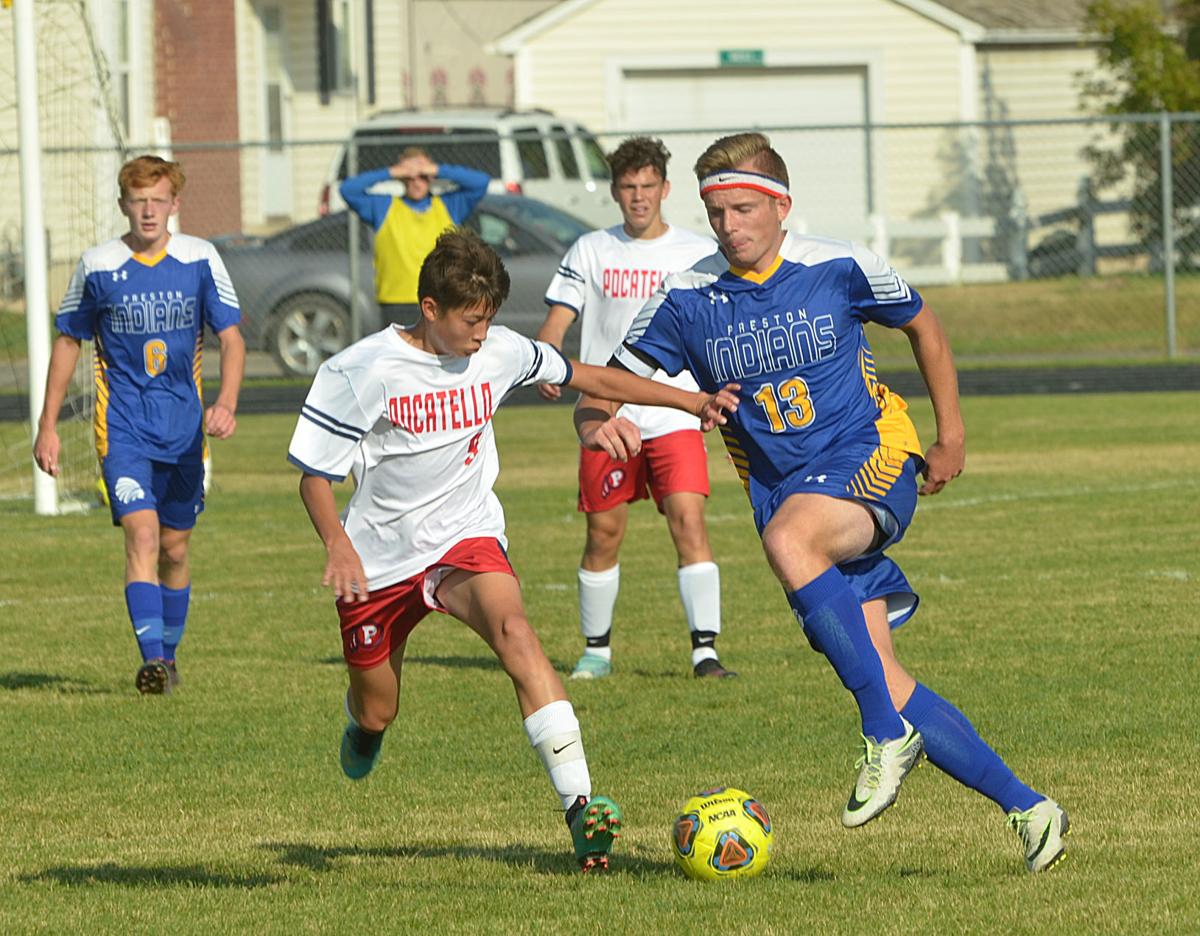 Ty Miller races to beat Pocatello to the ball. 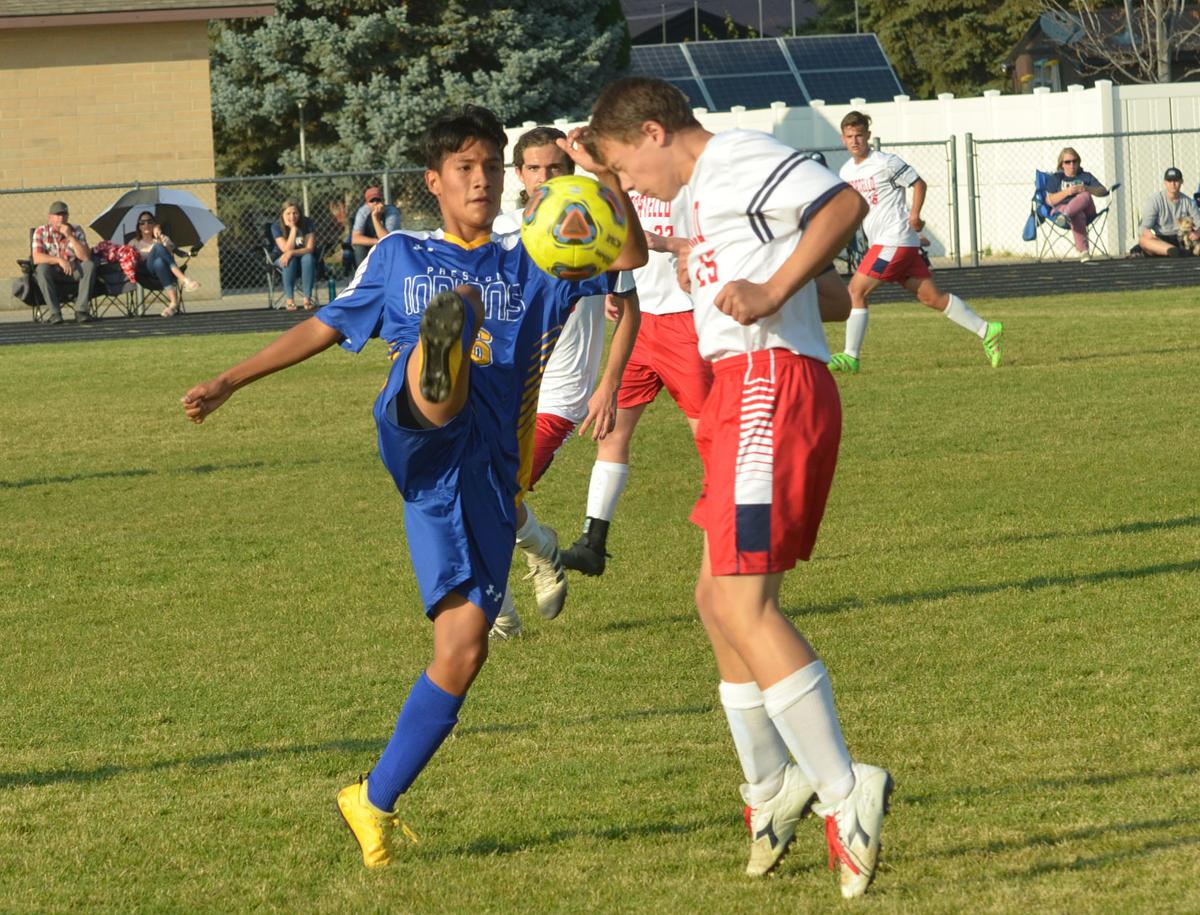 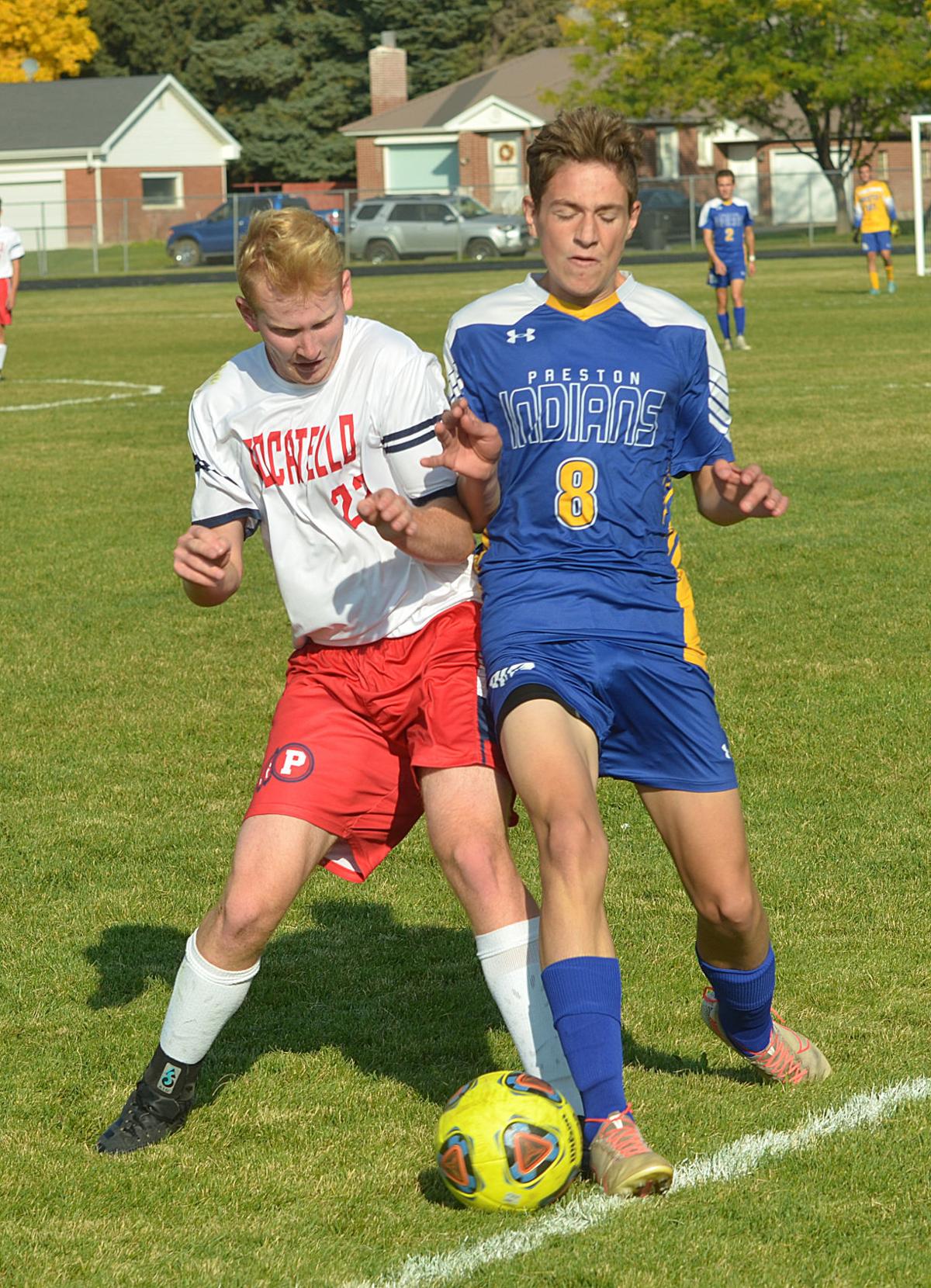 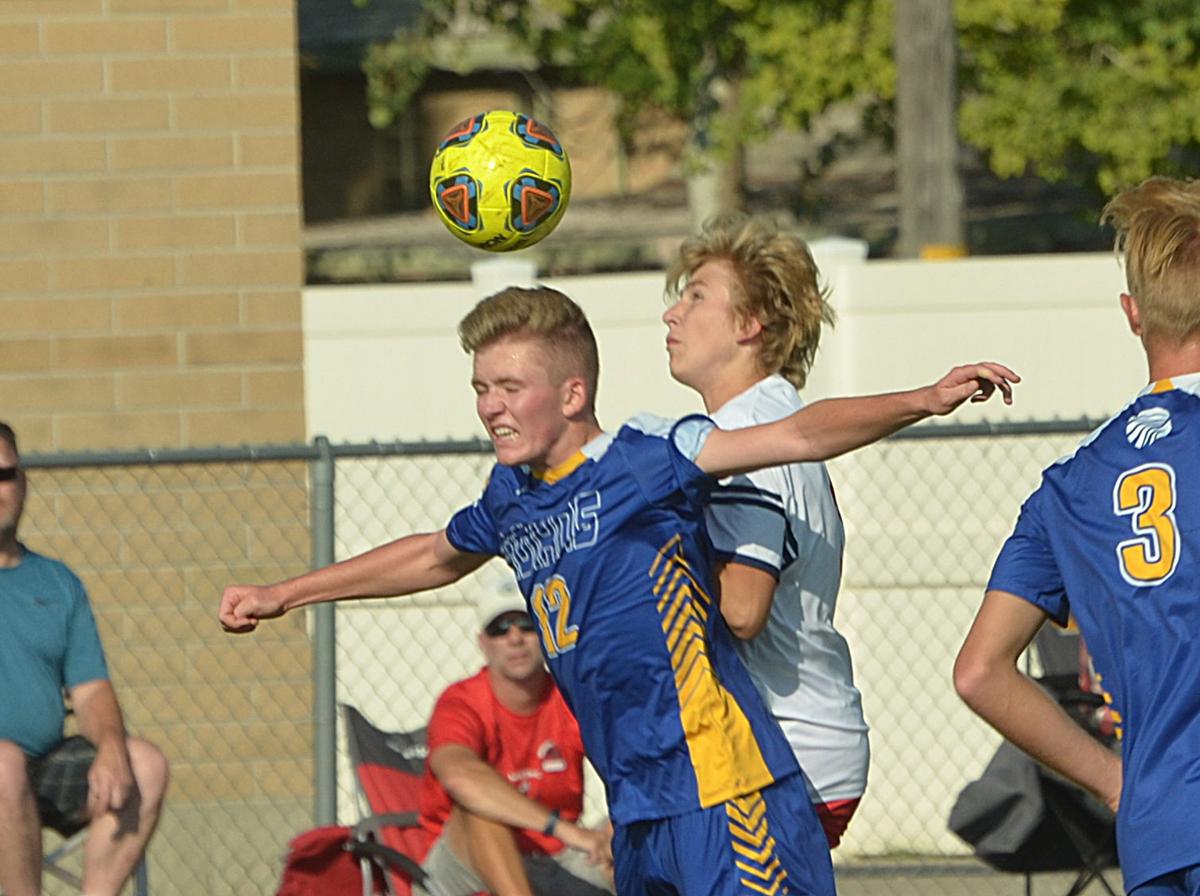 Hunter Facer heads the ball under pressure from Pocatello.

Ty Miller races to beat Pocatello to the ball.

Hunter Facer heads the ball under pressure from Pocatello.

The Indians fell to Century in Game 2 of the 4A 5th District Soccer Tournament, sending them to an elimination game against Pocatello on Oct. 13 (score unavailable at press time). A win eliminates Pocatello and pits Preston against Century again, in Pocatello, on Thursday, Oct. 15, at 4 p.m. They must win that game to force a fifth game on Saturday, Oct. 17, at 11 a.m. for the district title and state berth against Century. There is no back door this year for the second place team, so it is win or go home.

It was a heartbreaker for Preston on Oct. 8. They rallied from a one-goal deficit despite playing a man down, but lost to Century 2-1 on a golden goal six minutes into overtime.

The Diamondbacks (10-1-2) scored midway through the first half and appeared to be in control. But in the second half Preston midfielder Ty Miller was issued a red card after fouling a Century forward as the last defender. However, Kadin Reese volleyed in a Brian Bustos corner kick in the 72 minutes in, to equalize for the Indians (8-6-2).

“We played a man down the majority of the second half and played great,” PHS head coach Kira Matthews said. “The whole game was back and forth. Both sides had good opportunities and chances, but when Ty went out, the boys knew they had to rally together if they were to stay in the game, and they did. We dictated the tone of the game after that and really built up our confidence, knowing that if we can outplay them with 10, we can really outplay them with 11.”

The Indians opened the tournament at home against Pocatello on Oct. 6 and won 4-0 after limiting their foes to just five shots.

A nice build up starting with a punt by keeper Zach Burnett and finishing with Tyce Shumway who one-touched the ball in, started Preston off on the right track. Kadin Reese added two more before the half for a 3-0 lead. His first was powerful volley, courtesy of a Tucker Daley cross. Ty Miller facilitated the goal with a nice corner ball to Daley.

Reese completed his hat trick 17 minutes into the second half off a beautiful transition play. A Pocatello free kick found its way to Golightly, who delivered a perfectly placed 50-yard crossfield pass to Reese, who finished his breakaway opportunity.