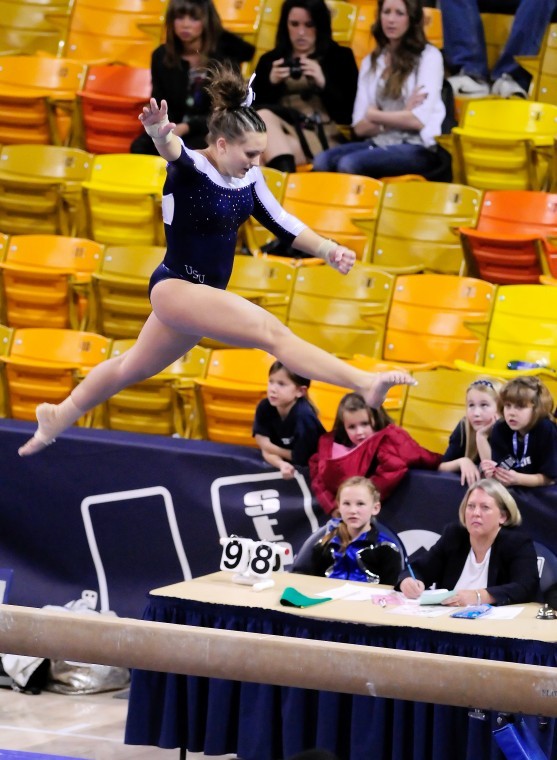 Utah State's Jackie Dillon competes on the balance beam in a meet against BYU and Arizona Friday night at the Spectrum. Dillon finished second in the all around with a score of 38.500. 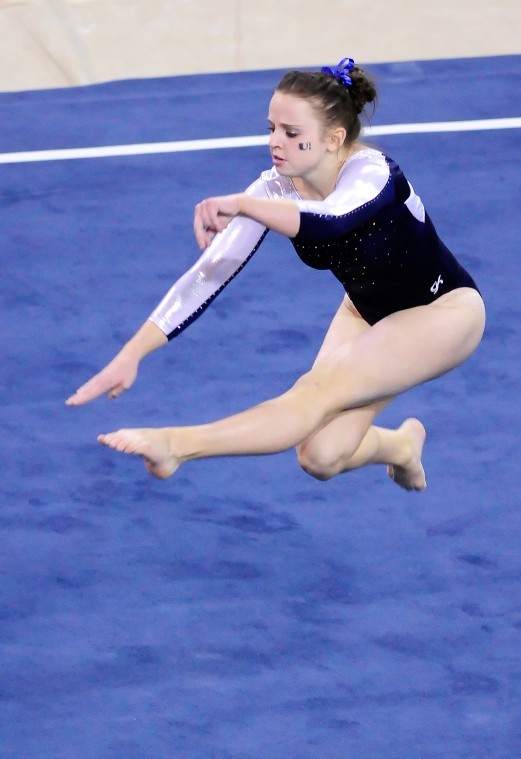 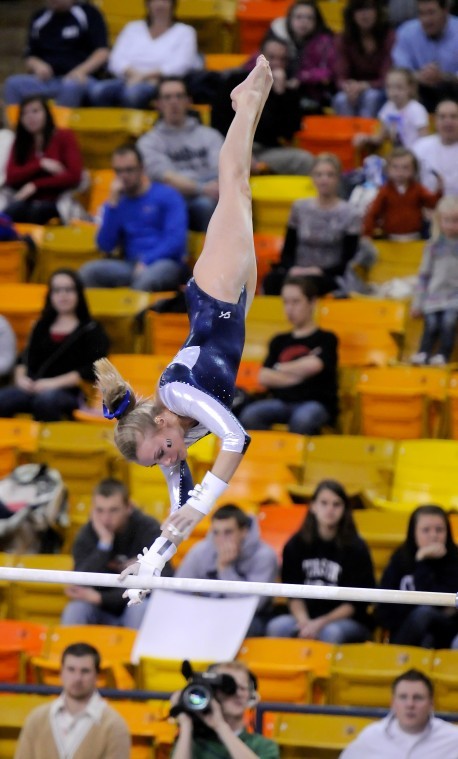 Utah State's Nicole Simoneau performs on the uneven bars Friday night in a meet against BYU and Arizona at the Spectrum. Simoneau tied for first on the apparatus with a score of 9.850.
1 of 3

Utah State's Jackie Dillon competes on the balance beam in a meet against BYU and Arizona Friday night at the Spectrum. Dillon finished second in the all around with a score of 38.500.

Utah State's Nicole Simoneau performs on the uneven bars Friday night in a meet against BYU and Arizona at the Spectrum. Simoneau tied for first on the apparatus with a score of 9.850.

Utah State had the start it wanted Friday night in its tri-meet with No. 18 Arizona and No. 26 BYU at the Dee Glen Smith Spectrum.

Unfortunately for the Aggies, they struggled on beam (46.500 with three falls), surrendering the lead they had after two events and finishing third behind the Cougars (193.075) and Wildcats (192.725) with an otherwise solid effort.

Despite a number of crucial falls on beam and bars, Utah State head coach Jeff Richards is happy about how his 29th-ranked squad is coming along this season.

"On three events we rocked. ... It may not have been what we wanted, and the scores may not be where we wanted - I don't think it shows where we are - but all in all, I think we competed way better today than we did last week," said Richards, who finished with a 192.000 in the meet. "... But we've got to figure out beam. We've got to get that together."

In just her second meet competing in the all-around, Aggie senior Jackie Dillon upped her career high with a 38.500, second behind Arizona's Deanna Graham (38.575).

Still, Dillon is an individual example of the general improvement the Aggies are making as the year goes on.

"Yeah, I was so mad," Dillon said of her beam score. "But I talked to the judges afterwards and things kind of made sense, but they kind of killed me on it.

"... We came in here a lot stronger than we did last week, and we were more prepared. It was a lot of fun this meet. We pulled it together on floor. We just tried to push through as hard as we could."

The Aggies found themselves down less than a point coming into the fourth and final event - the floor exercise, one they have been doing well on this season. It was a solid effort there, with freshman Paige Jones (9.750) and sophomore Amelia Montoya (9.725) both recording career highs.

Boone started off the night with a bang, tying her career high on vault with another 9.825. Things were going well on bars when her only fall of the day occurred, but it didn't hurt the Aggies, who scored a meet-high 48.625 there. Junior Nicole Simoneau tied Arizona's Miranda Russell for the meet-high score on bars, recording a 9.850, her 27th 9.8 or higher in 31 tries competing on bars.

The Wildcats solidified second place in the meet on their final event - vault - putting up consistently high scores there. Graham and teammate Mykle Douglas tied Boone for the meet-high on vault with a pair of 9.825s. No Wildcat would score lower than 9.600 in that event.

Coming off a solid effort of their own on vault (48.475), which vault-ed them into first place, the Cougars maintained that lead with nothing lower than 9.700 on bars.

Despite the Aggies' struggles on beam, Muhr took home the top spot in that event with her career-best 9.800.

"I think there's room for improvement," Richards said. "We have some little steps, we had some mess-ups on beam - castovers ... we didn't stick all our dismounts - so there's areas, room for improvement, but I really think we're on the right track. I think we're confident on those (other) three events, and I feel like we're in a pretty good spot."