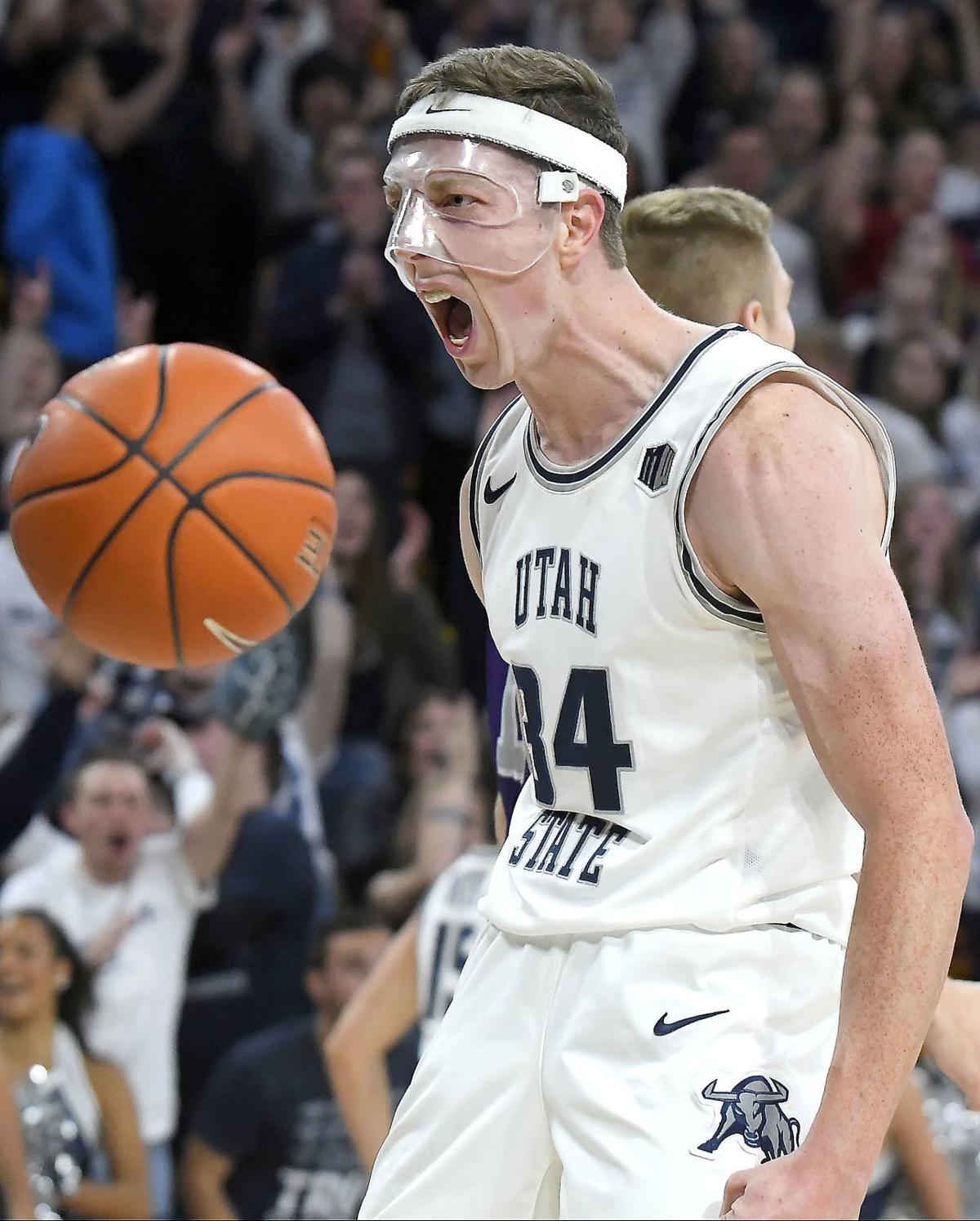 Utah State forward Justin Bean (34) celebrates after making the basket after getting fouled against Weber State on Friday in Logan. 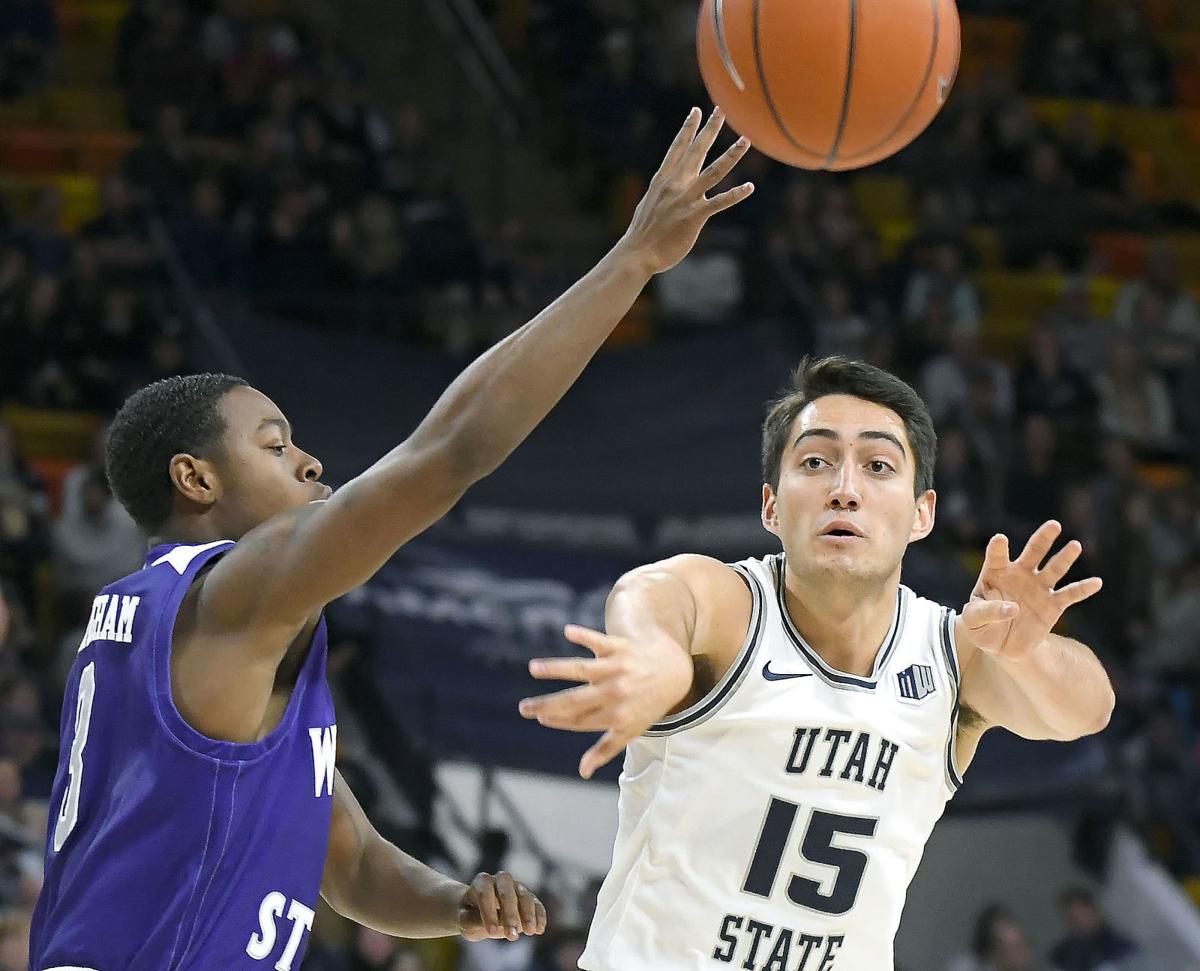 Utah State forward Justin Bean (34) celebrates after making the basket after getting fouled against Weber State on Friday in Logan.

Not much went wrong for the Aggies on Friday night.

And not much went right for the visiting Wildcats in their season opener.

No. 17 Utah State rebounded from a tough outing in its season opener on Tuesday to absolutely blow out in-state rival Weber State at the Dee Glen Smith Spectrum in front of 8,840 fans. The Aggies made more than 55 percent of their shots and cruised by the Wildcats, 89-34.

“We have so much respect for Weber State,” USU head coach Craig Smith said. “Coach (Randy) Rahe is just a phenomenal coach and just a great person. ... He’s always said so many great things about Utah State before I was here, certainly when I got hired. He was one of the first people that reached out. He really was a great mentor for me about Cache Valley, and certainly I knew about the tradition, but he even helped on that. I just can’t say enough great things about him as a person and as a coach.”

The Wildcats were playing without their story player, Jerrick Harding. He is out with an injury.

“We knew we had a job to do and executed really well offensively,” Bean said. “... I’ve worked a lot on improving on offense.”

Porter had a double-double, dishing out a career-high 10 assists.

“It was really nice to see us share the ball and get back to the culture we built last year,” Porter said. “Montana State (on Tuesday) was a little rough. We played defense first and it flowed into our offense.”

“Any time you can hold a Division I team to 34 points, you should be proud of that,” Porter said. “If you can play defense, you can win anywhere.”

There were four lead changes in the first four minutes of the game. Then the Wildcats couldn’t buy a bucket.

Merrill sank a pair of free throws to trigger a 12-0 run. Five different Aggies scored during the surge. Brito scored off a pass from Merrill to give the hosts a 16-6 lead midway through the opening half.

The Wildcats went seven-and-a-half minutes without scoring. When they did, they made one free throw and more than a minute later made one more free throw. USU kept right on finding the bottom of the net. A dunk by Kuba Karwowski gave the hosts a 24-8 lead with 6:18 left in the first half.

Then Bean went nuts. The sophomore fan favorite had back-to-back three-point plays, including a rebound dunk that capped a 9-0 Aggie run, giving USU a 33-11 lead with 4:15 left in the first half.

“Offensive rebounding is something I take a lot of pride in,” Bean said. “It’s not really a scientific way of playing; it’s just a matter of effort and grit. I try to outwork my opponent.”

The Wildcats went cold again before the break, going scoreless for the final four minutes. Meanwhile, the Aggies reeled off 15 unanswered points. Merrill finished the first half with a 3-pointer, and Bean outscored the Wildcats with his 15 points as USU took a 48-13 lead into halftime.

“We had a great look to us,” Smith said. “... Our guys certainly responded in a great way. It was an exciting game. At the end of the day, 48-8 in the paint and holding them to 13 points (in the first half). That is incredibly difficult to do, but our guys were locked in.”

Klay Stall gave the Aggies their largest lead of the game, 89-32, with a bucket in the closing minute.

“I thought we came out and played well defensively,” Bean said. “We were locked in mentally tonight, and it showed.”

Rahe spent five seasons at USU as an assistant to Stew Morrill, the winningest basketball coach in school history. … USU improved to 58-18 all-time as an AP ranked team. … The Aggies outrebounded the Wildcats, 44-27 and had 19 second chance points to Weber State’s 4. … USU improved to 28-2 under Smith when leading at halftime. … Merrill scored in double figures for the 79th time in his career. It is also the 25th straight game the senior guard has scored in double figures, dating back to last season. With six assists Friday, Merrill also moved past Tai Wesley and into eighth on the career assists list with 361. … The Aggies lead the all-time series with the Wildcats, 44-28.

There was plenty for the home crowd to be excited about Friday night. Some old chants and new ones were heard during the contest.

In the first half, the USU students chanted “Up by 30” when the Aggies took a 43-13 lead. Then they used “M-V-P” for Bean after he scored his 15th point of the opening half. Then going into halftime they chanted “Bean is winning” as he had 15 points to the Wildcats’ 13.

“I just want to thank The HURD and our fans for coming out,” Smith said. “I just can’t tell you how appreciative we are as a program to our fans and the support that they’ve given us and the energy that they bring every night. … It makes a huge difference when you can have a spirited atmosphere like that. It just brings goosebumps.”

Once again a handful of worthy players, but Justin Bean gets the nod. The forward is playing with a broken nose and two teeth that were replaced by an oral surgeon after Tuesday’s game. The sophomore finished with a game-best 18 points on 6 of 11 shooting from the field and 6 of 7 from the foul line. He just missed his second double-double of the young season by grabbing a game-best nine rebounds. Bean also had an assist and a steal in 22 minutes of action.

There were two dunks by the Aggies over the first 20 minutes. Kuba Karwowski took a pass from Abel Porter and slammed it home late in the first. Then Justin Bean had his rebound jam, landing on his back as he was fouled.

In the second half, Karwowski had his second flush off a Porter pass. Trevin Dorius joined the dunk group with a slam from a Alphonso Anderson pass.

The Aggies are still at home for three more games. They take on Denver (0-1) on Tuesday. Tipoff is set for 7 p.m. The Pioneers lost to Colorado State in their opener, 74-63, and host Utah Valley on Saturday.