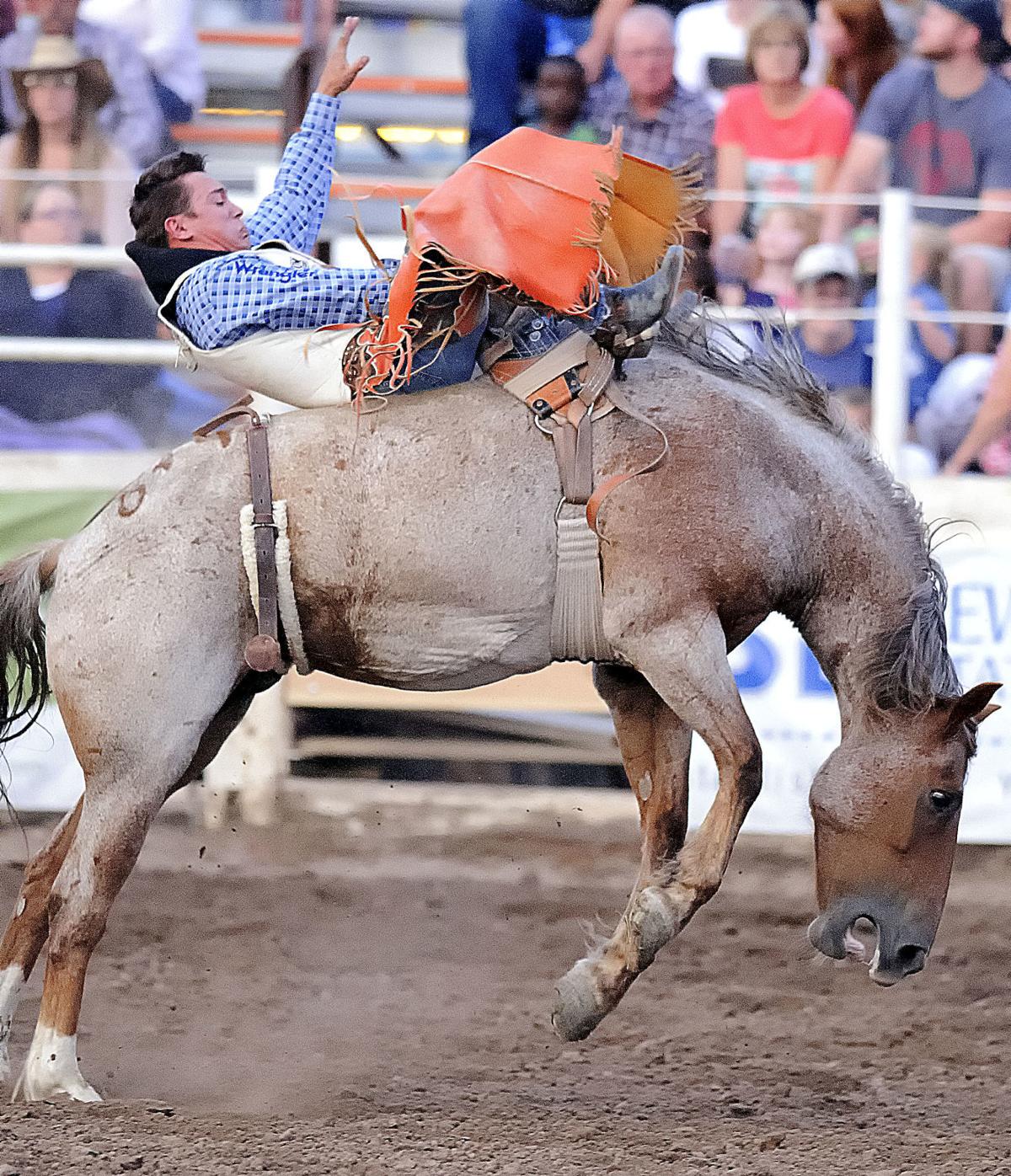 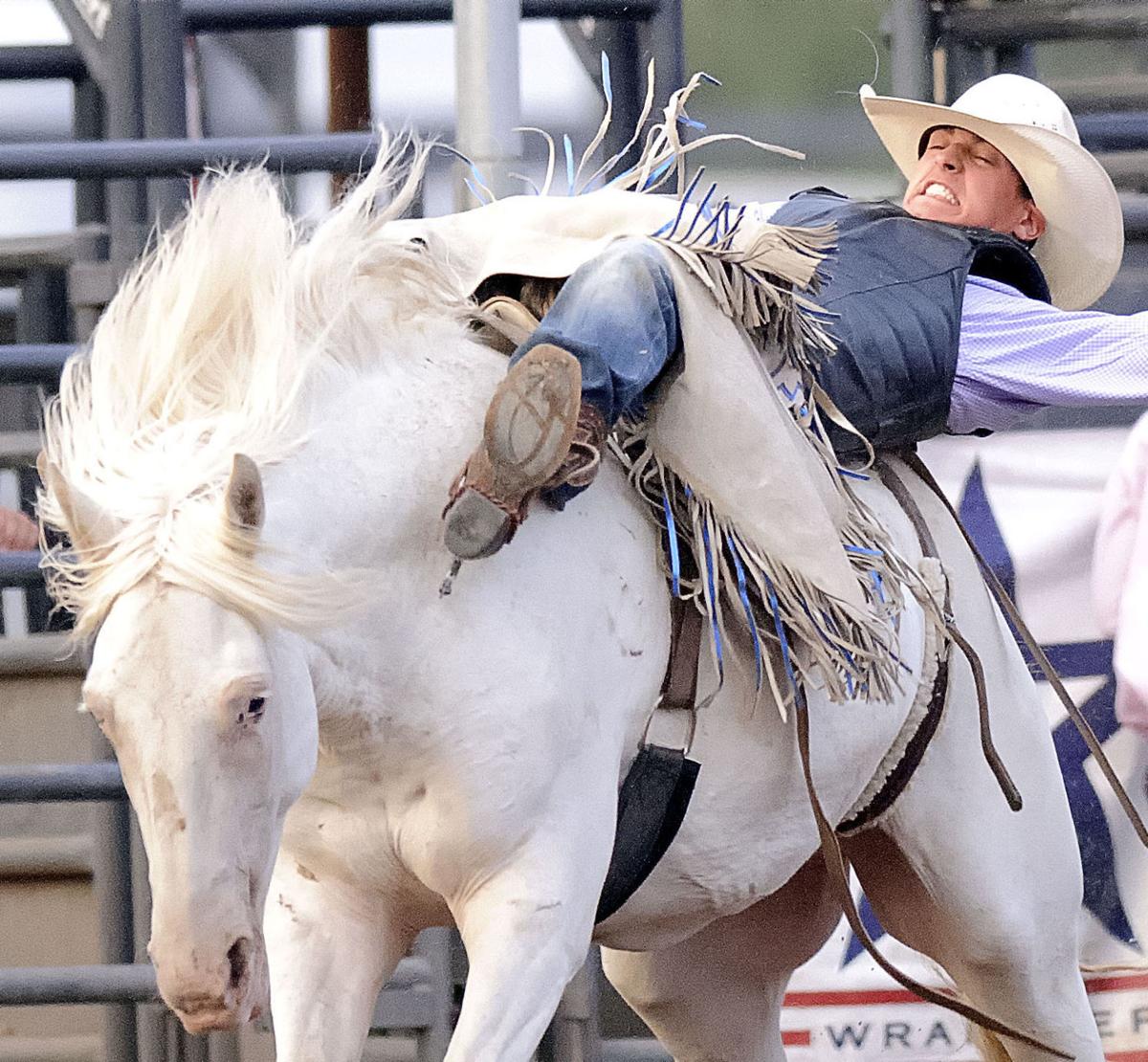 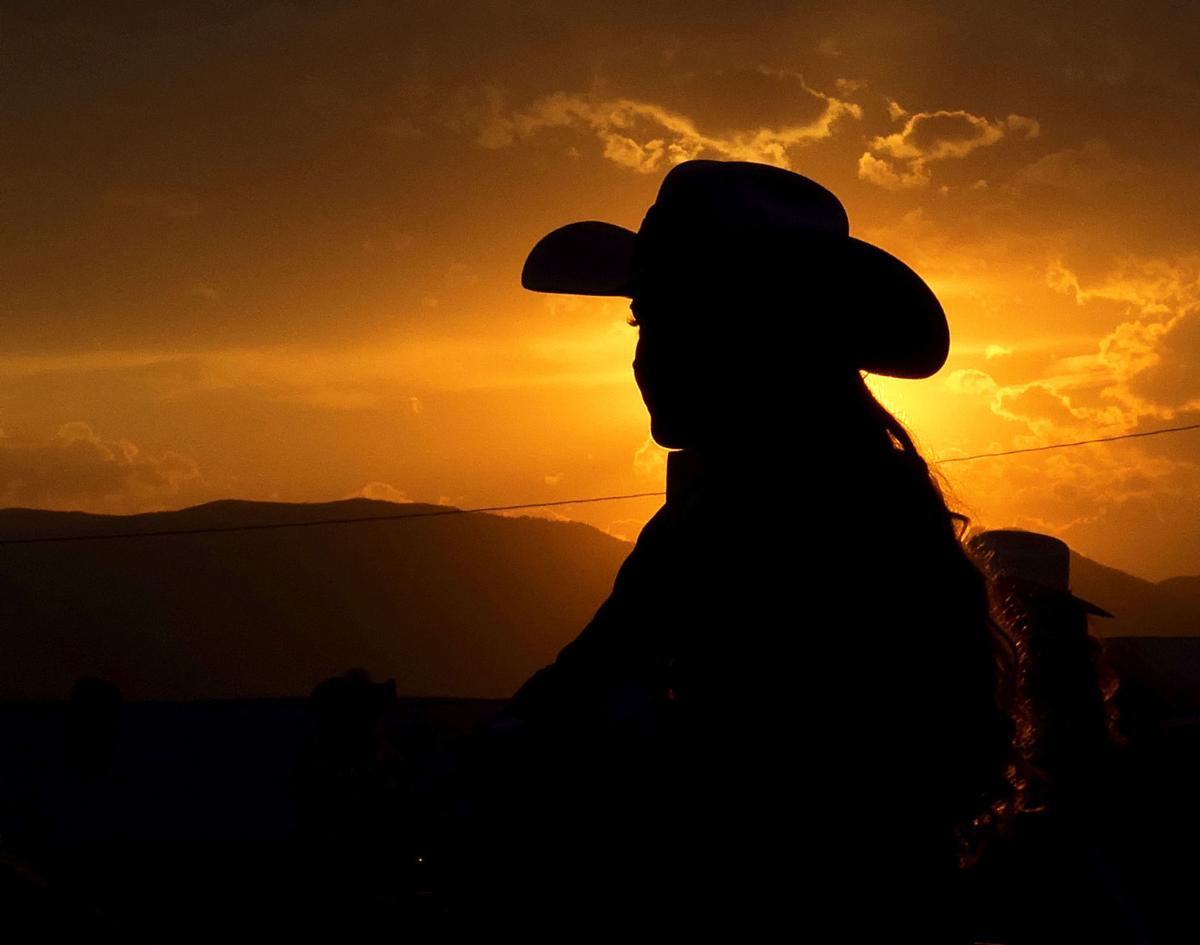 A member of the royalty waits in enter the arena as the sun sets at That Famous Preston Night Rodeo on Thursday.

A member of the royalty waits in enter the arena as the sun sets at That Famous Preston Night Rodeo on Thursday.

PRESTON — Fans that packed the stands for That Famous Preston Night Rodeo were not disappointed Thursday.

The first of three performances began with a bang. From entertaining clowns to specialty acts to the cowboys and cowgirls that competed, it was a great night to be at the start of the 83rd night rodeo.

The tight seating will hopefully be fixed by next year. The rodeo committee unveiled a plan to replace the bleachers in the stands, but first money needs to be raised. If enough can be raised to start the project, it will get underway this fall and be ready for the 84th rodeo next summer.

During the promotion video, committee members said more people come home to Preston this time of year than for Christmas. They asked for all rodeo fans to support the project. Chairman Kris Beckstead has faith the money will be raised and the project will begin. Those wishing to donate may do so by going to www.prestonrodeo.com.

Clayton Bigelow proved why he is No. 6 in the world. He covered the horse Ten High for a score of 82.5.

“That horse was a little weaker than I thought she was going to be,” Bigelow said. “She was still good, good for an 82.”

When informed of his score being 82.5, Bigelow said: “That half point will come in handy.”

The Clements, California, cowboy said there were plenty of good cowboys still to ride, but hopes to earn a check.

“I would be surprised to win it,” Bigelow said. “... I pulled a check here last year and hope to repeat.”

Having just competed at the Cheyenne Days Rodeo in Wyoming and heading to Oregon, Bigelow hopes to keep rolling and make the National Finals Rodeo (NFR) in Las Vegas. The top 15 in each event qualify.

“I’m healthy right now, and that’s the main thing,” Bigelow said. “Being healthy is huge any time, but being in the heat of the summer run, it’s good to feel good.”

In the steer wrestling, Baxtor Roche made a successful trip over the hill from Tremonton. The younger brother of three-time NFR qualifier Baylor Roche had the best time turning his steer on its back, clocking in at 4.4 seconds.

“My brother Baylor has won this rodeo two or three times,” Baxtor Roche said. “I’ve never had any luck here.”

That changed for the 24-year-old Thursday. Like Bigelow, he is not sure his time is fast enough to be the winner by the end, but should be good enough to win some money.

“Everything went real good,” Roche said. “I drew a good steer. The horse messed around in the box, but everything worked out. It was good.”

The younger Roche mainly competes in the Wilderness Circuit — Idaho, Utah and Nevada — but hopes to join his big brother on the national scene down the road. He is in the top 10 in the circuit.

As is the case most years, the Mutton Bustin winner needed help carrying out the trophy as it was bigger than the youngster. She told the clown it was her first and last ride aboard a sheep.

While there was success in most events, team roping and bull riding was not so lucky. Most of the team ropers broke the barrier, which means they left early and got a 10-second penalty. None of the runs Thursday will win any money when the rodeo concludes.

The bull riding was the final event. Just one cowboy rode his bull, but Paul Williams’ score of 64 will also be tough to win a paycheck.

Meanwhile in the saddle bronc riding, all 10 cowboys who competed finished with a score. Allen Boore and Chase Bennett finished tied with marks of 84.5 points. Boore came into the weekend in 18th place in the world standings.

The cowboy from Axtell made it to the NFR in 2016, but has finished 18th on two other occasions. Thursday night was a bit nerve wracking for the 27-year-old.

Boore was supposed to ride One Love, but the horse refused to buck when released. Boore had to hop off after the eight seconds had expired.

“You never know what’s going to happen if (the horse) is going to leave the chute or flip over,” Boore said. “In this case, the horse just stood there and didn’t move at all. … I’ve been on a quite a few horses and you see all sorts of stuff over the years. Tonight that horse didn’t want to play rodeo.”

The horse is known for stalling a bit, but will usually leave and then really go. That was not happening Thursday. Boore was given a re-ride and had to hustle and get on Wild Ride.

“Luckily, these guys that got on before me were good help,” Boore said. “It was a group effort to get on another one.”

It certainly did work out.

“It’s nice to get a re-ride and have a chance to win or place in the money,” Boore said. “... I’ve seen that horse (Wild Ride) and he is still a really good draw in any pen. I was happy to have him. … I was able to get in rhythm and it felt really good.”

Boore won in Preston two years ago. Will his ride hold on for first?

“I don’t know,” Boore said. “All these guys are our buddies and shoot, you hope they ride well. If they deserve to win, you cheer for them.

Like Boore, Bennett had a little issue getting started.

“It went pretty good once I got out of the chute,” Bennett said. “I had a little trouble in there, but he was a good horse. … He kind of popped my chin a little and I just had to bare down and get aggressive. It worked out.”

The Goshen cowboy has had success in Preston before and believes he will earn a paycheck with his ride Thursday. Bennett is still chasing that first trip to the NFR.

“That is the plan, just got to keep working hard and trying to get there (NFR),” Bennett said.

Brodi Jones of Erda had the best time in the tie-down roping, while Teri Bangart of Olympia, Washington, and Christine Laughlin of Pueblo, Colorado, tied for the best times in barrel racing.

The rodeo will continue with performances Friday and Saturday night. Pre-rodeo activities begin at 8:15 with the action starting at 8:30. There is also a parade taking place in downtown Preston each evening before the rodeo.