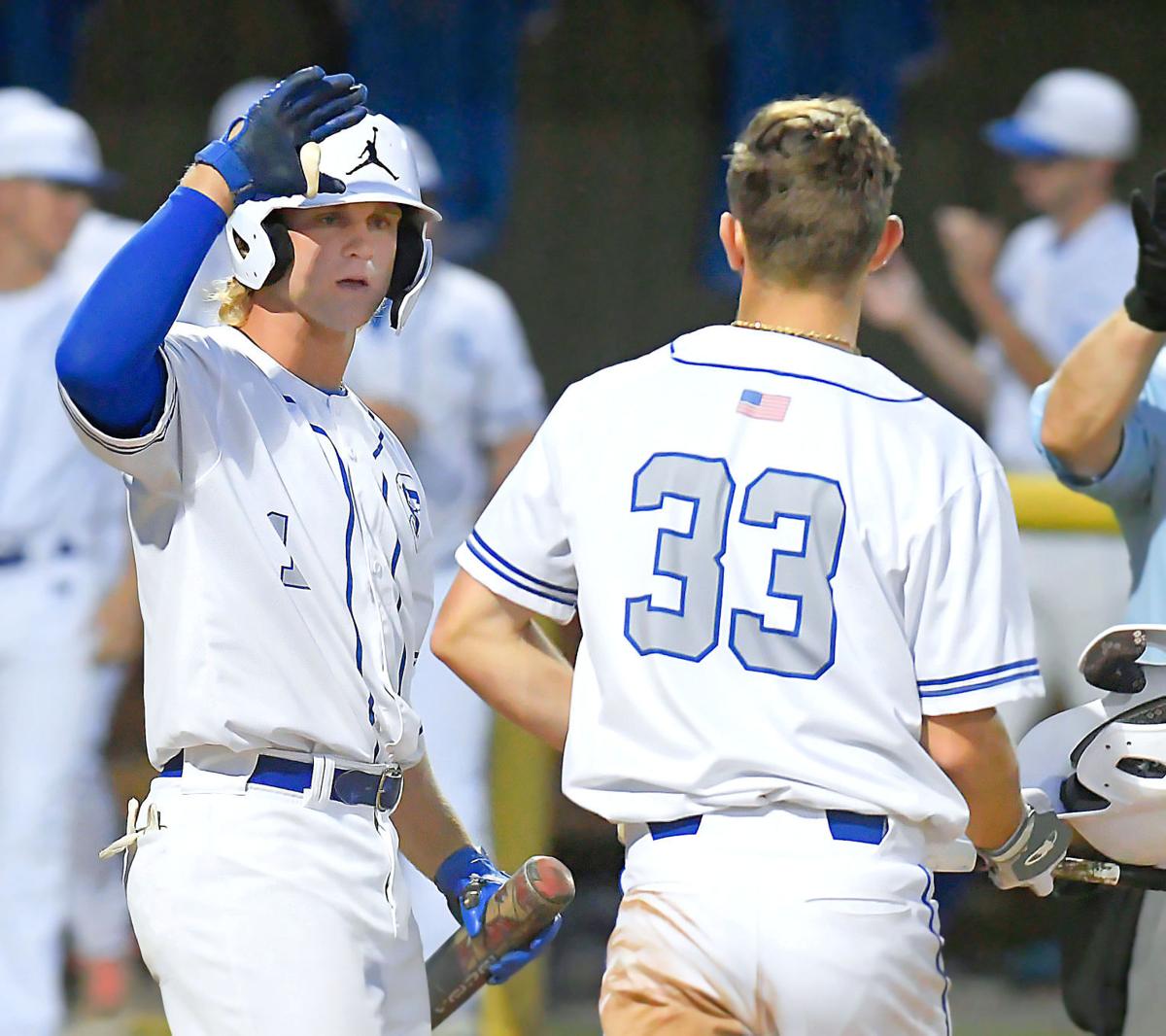 Smithfield’s Ryder Lundahl congratulates Gabe Passey (33) after he scored a run against Hyrum on Tuesday in Smithfield. 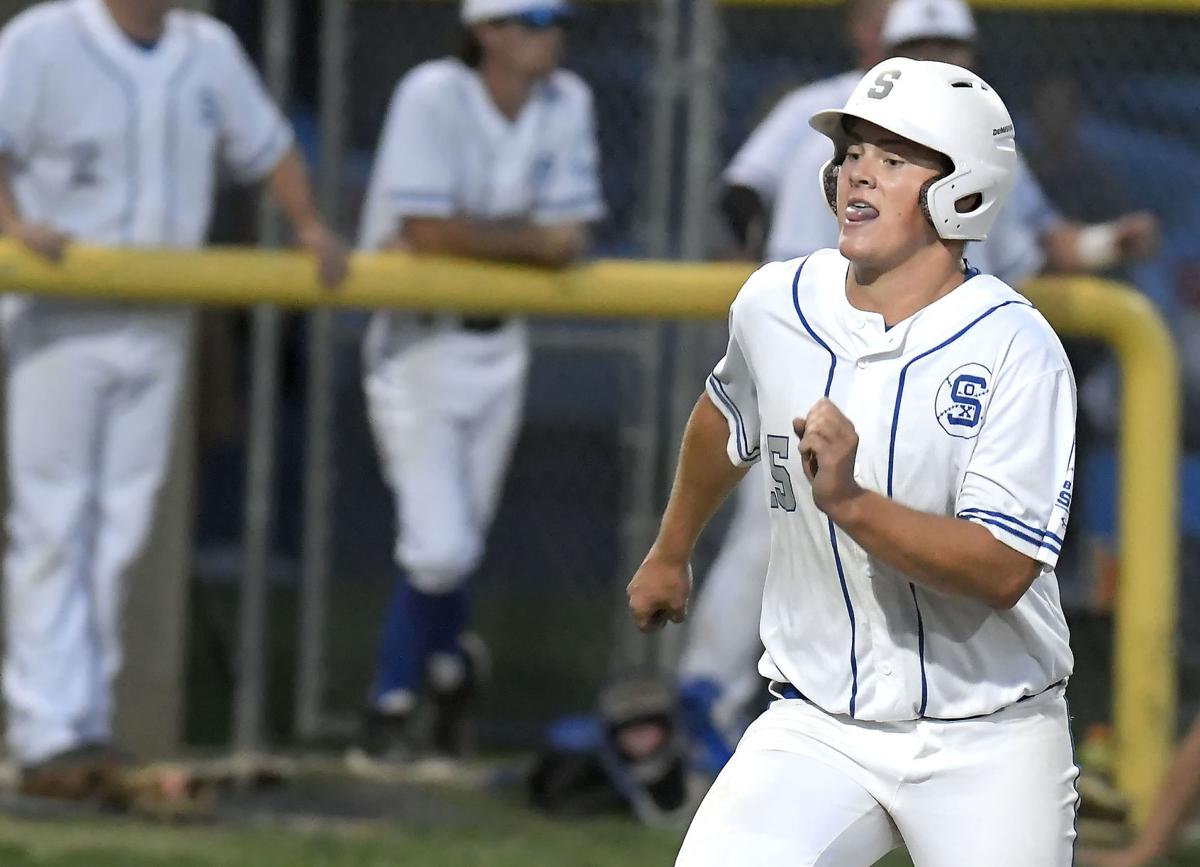 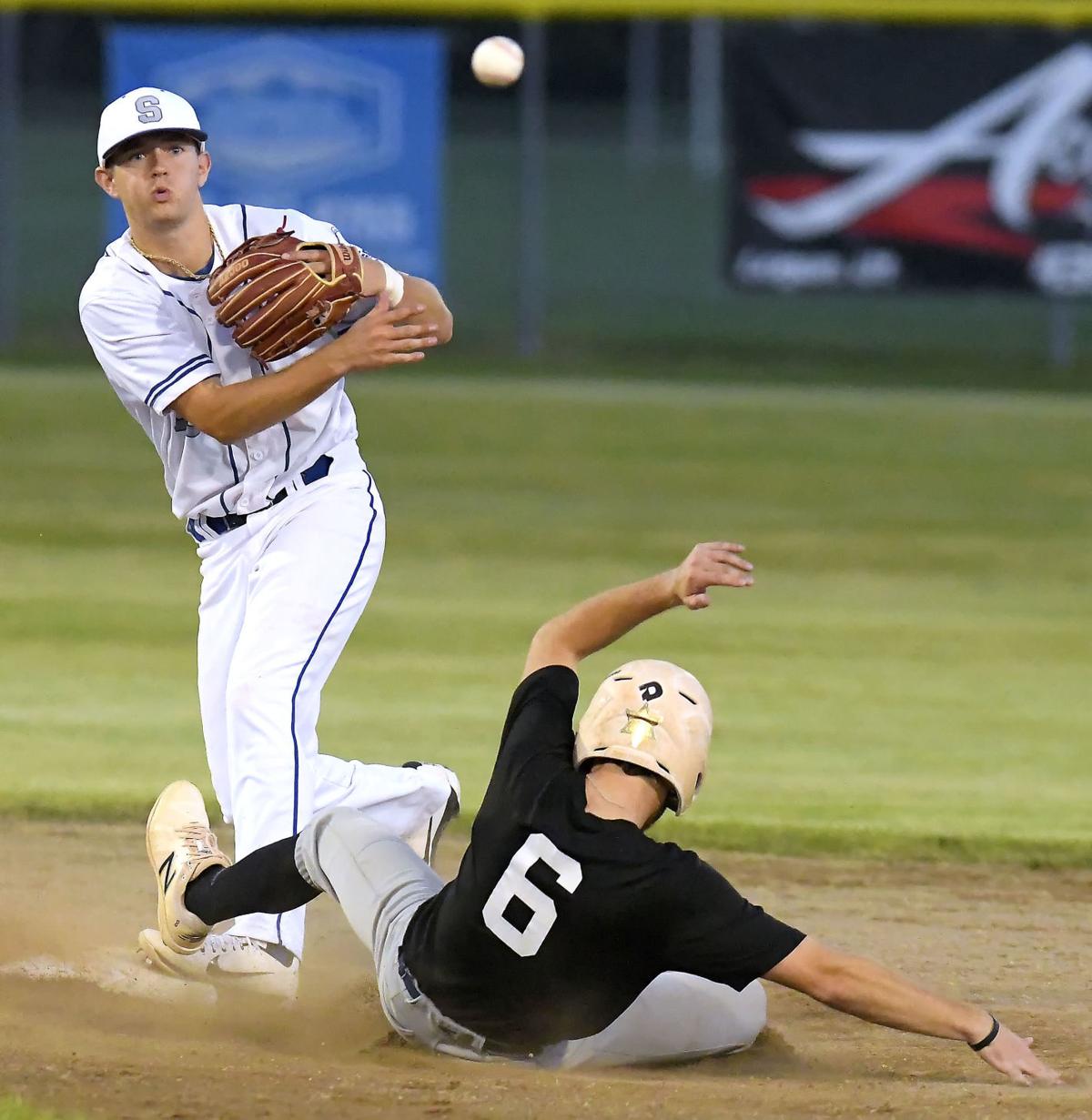 Smithfield's Gabe Passey forces out Hyrum's Jace Burbank at second base on Tuesday in Smithfield.

Smithfield’s Ryder Lundahl congratulates Gabe Passey (33) after he scored a run against Hyrum on Tuesday in Smithfield.

Smithfield's Gabe Passey forces out Hyrum's Jace Burbank at second base on Tuesday in Smithfield.

SMITHFIELD — It was looking bleak for the Blue Sox, just like it was three days ago, but once again they refused to panic.

Smithfield came storming back from a 7-0 deficit to beat Hyrum 11-10 in Game 1 of the Northern League Utah championship series last Saturday, and the situation was even more dire this time around. The Hornets jumped out to a 10-0 lead this time around before the Blue Sox rallied for a stunning 11-10 win in the third and decisive game of the series in front of a large Tuesday night crowd at Richard V. Hansen Baseball Park.

“It’s an amazing group of players and we just kept fighting,” Smithfield pitcher/first baseman Zach Hansen said. “That’s the biggest thing with us is we never gave up. We’ve been doing this all year, coming from behind, and I don’t even know how many walk-offs we’ve had this year, but we just continued to fight.”

Indeed, Smithfield’s refusal to fold when faced with adversity was the biggest reason it terminated a lengthy drought. Year in and year out the Blue Sox are legitimate title contenders in the NUL, but a championship had eluded them since 2007.

That streak came to an end Tuesday night to the delight of long-time player Jordan Hansen, who also serves as Smithfield’s manager.

“Last year we were in this same situation, Game 3, and we lost 4-3 (to Providence) on two two-run home runs, and I feel like last night was a repeat of that,” Jordan Hansen said.

“I mean, (Hyrum) got the two home runs and so I’m like, ‘this is déjà vu’ It’s one of those things where I feel like ... you want something so bad, it just doesn’t work out, but this is a special team. It’s more like a family. Everybody picks everybody up and wants everyone to be successful, and I think teams win baseball games and championships, not talent. Talent can get you places, but the team atmosphere here is special.”

Simply put, it was an epic series between the top two seeds in the tournament as all three games were decided by a single run. In fact, four of Smithfield’s final five contests came down to one run — three final scorelines of the 11-10 variety, ironically enough.

The second-seeded Hornets (19-12) forced Tuesday’s if-necessary game by holding off the top-seeded Blue Sox (29-6) 3-2 on Monday in Hyrum. A two-run homer by Ty Jones and a solo shot by Brantzen Noble accounted for all of Hyrum’s runs, and the Hornets made a handful of huge defensive plays — two each by infielders Jaxon Burbank and Hayden Simper — to earn the win.

It certainly didn’t appear the Hornets would need to sweat it out this time around — not after they put a 10-spot on the scoreboard in the top of the first. The visitors plated those 10 runs on seven hits, four walks and a hit batsman.

Hyrum’s impressive offensive display was highlighted by a three-run bomb over the fence in left by Jones, and two-run singles by Jarrett Hunt and Tadon Burbank. Jaxon Burbank, Jase Burbank and Simper also drove in runs for the Hornets in the opening frame.

“Our plan today was to play with a lead,” Jordan Hansen said. “We haven’t done that really this whole postseason and that went out the window quickly.”

The Hornets were able to chase a pair of Smithfield pitchers in the first inning before Zach Hansen came in to help the hosts record the third out. No. 7 then proceeded to put the clamps on the Hornets as he limited a potent lineup to zero runs on two singles and two walks the rest of the way. The hard-throwing right-hander struck out nine and retired the side in order in the third and seventh frames.

“I mean, you always have a plan when the game starts and we had three guys lined up that we wanted (to pitch), and it didn’t work out with the first two,” Jordan Hansen said. “And Zach’s thrown one or two innings here and there at a time, so we asked a lot of him and he responded. He’s a good ball player and he dug down and found something real special tonight.”

Zach Hansen has spent the past three years pitching out of the bullpen, whether it was for the Blue Sox, Arizona Western College or Dixie State University. The former Sky View star hasn’t been called upon to throw more than a couple of innings in a long time, but he was certainly up to the challenge.

“I think I just had so much adrenaline and ... after I got over that hump, I just kept throwing and found my rhythm,” he said. “I used to throw a lot of pitches in high school and it just kind of came back. I got in a rhythm and just stuck with it.”

Not only did No. 7 prevent Hyrum from extending its substantial lead, he spearheaded Smithfield’s furious comeback. Zach Hansen went 3 for 3 at the plate with a solo homer — a 400-or-so-footer to center in the bottom of the second — a double, three runs and a walk.

The Blue Sox racked up 10 hits from the fourth inning on and scored 10 of their runs during that stretch. Gabe Passey and Chase Mercado drove in runs in the bottom of the fourth, Tyler Walters came through with a two-RBI double one inning later, and Smithfield’s four-run sixth inning was headlined by a two-RBI single by Daxton Purser.

Smithfield, which stranded 13 base runners in Monday’s loss, scored the tying run on a wild pitch, and speed-up runner Dawson Barson accounted for the winning run by tagging up on a fly ball to left field by Braden Anderson.

Purser went 2 for 3 with two RBIs, two runs and a walk for the Blue Sox, who finished with six extra-base knocks. Anderson and Mercado drove in two runs apiece, while Rhett Nielson scored twice.

Smithfield right fielder Ryder Lundahl made a big defensive play in the top of the fifth when he snared a fly ball while crashing into the fence. Neither team committed an error, although the Hornets lost a couple of fly balls in the lights.

Jaxon Burbank and Hunt each singled twice for the Hornets, who got a pair of runs from Jones. Hunt also contributed with three RBIs, and Jase Burbank walked twice, singled and was hit by a pitch.

A full recap of Monday’s game can be found online at hjnews.com.