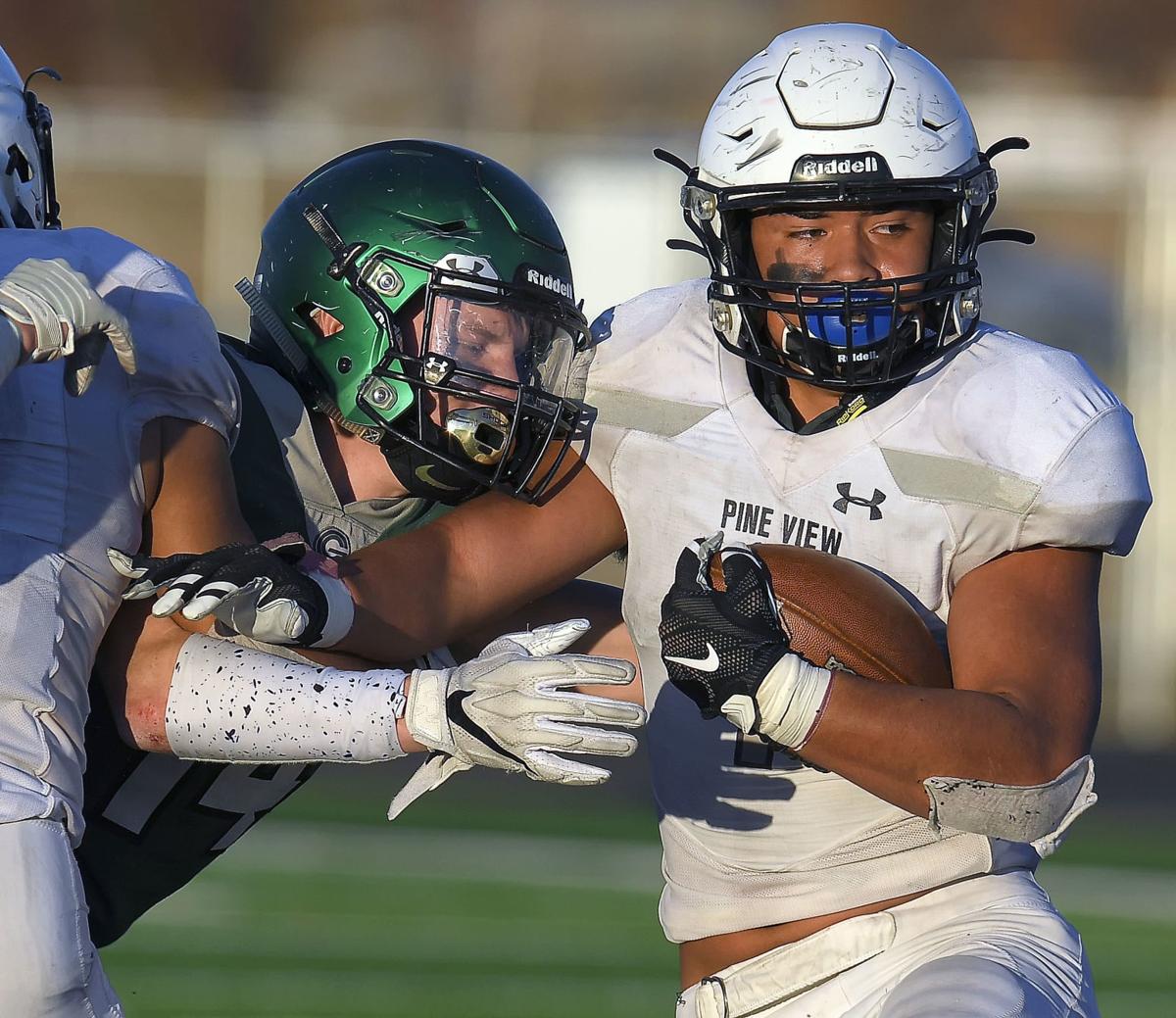 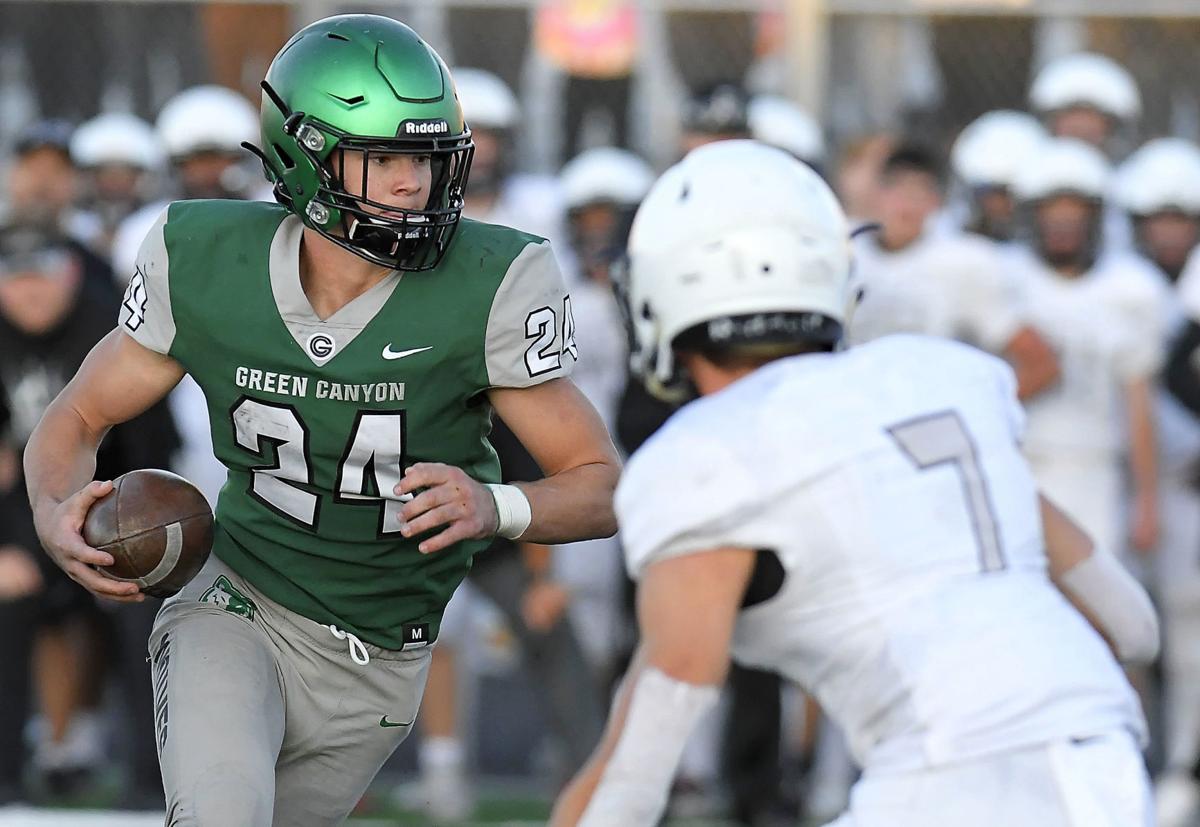 NORTH LOGAN — A 14-point fourth quarter lead wasn’t enough for Green Canyon to earn a victory Friday night. Instead, Pine View put up 21 points in the final quarter to beat the Wolves 43-36 and advance to the semifinals of the Utah high school 4A football playoffs.

Green Canyon (8-4) ends the season with its highest-ever win total and tournament seed (fourth) in its brief history as a school.

Fifth-seeded Pine View (9-2) will take on Park City in the next round of competition at the University of Utah on Thursday, Nov. 14.

It looked as if Green Canyon had the game under control very early on and found itself up 14-0 at home with just under four minutes gone off the clock. The defense was a force and created four turnovers in the game. The first two possessions for Pine View ended in an interception, one returned for six by safety Mckay Yorgason. Pine View was rattled.

But the Panthers composed themselves and scored two touchdowns in the matter of six minutes before the end of the first quarter, including a pick-six to tie the score at 14. Finding a rhythm in the passing game was difficult for both teams in the first half, as indicated by the interceptions. However, despite its own woes throwing the ball, forcing Pine View to run was exactly what the Green Canyon coaching staff wanted to execute.

“They throw the ball a lot, and I thought our defense came out and did a really good job of all-but eliminating the throw,” Green Canyon head coach Craig Anhder said. “They had to beat us running the ball. We made them bat left-handed, and their left hand was enough

Anhder might have been correct in his preparation. Through 10 weeks, Pine View averaged 377.7 yards passing and just 89.1 yards rushing per game. However, the Panthers on Friday displayed a side to the team they hadn’t shown all season and rushed for 230 yards on 38 carries with three touchdowns. Running back Enoch Takau was a battering ram for Pine View, forcing his way through the line of scrimmage at will. Takau’s rushing helped his team settle into the game, and the junior ended the night with a season-high 125 yards on the ground.

“No, they haven’t run the ball like that all year,” Anhder said. “They want to throw the ball, and so our goal was to make them go left-hand, make them do what they don’t want to do, and they had some success running the ball tonight … but they had to battle really hard and I was proud of our guys.”

From the second quarter on into the late third quarter, both teams were trading points and made the game feel like it was still anyone’s to win. Yorgason added to his interception with a spectacular touchdown catch in the back of the end zone to finish off the first half. Pine View intercepted its second pass of the game to open the third, setting Takau up to punch it across the goal line. Green Canyon quarterback Jacob Lundin tried to make up for his interceptions with a 4-yard touchdown rush to push his team’s lead to 29-22.

Yorgason grabbed his second pick of the night and fought his way down to Pine View’s 12 yard line, allowing running back Brennan Dean to find his second rushing touchdown of the night, effectively closing out the third quarter. Green Canyon had a 14-point lead to start the final frame, as well as all of the momentum.

The Wolves relied on their running game when it seemed like nothing else was effective, and it almost got them across the finish line.

“Yeah, I thought we started running well, and then we had a slump, and then we got it going again,” Anhder said. “But in a smash-mouth running game, which we were doing a lot of, if you don’t get three of four yards every time and you fall behind the chains, it’s really tough.”

Down 14 points and the season on the line, Pine View elevated its pressure on Lundin and was able to disrupt Green Canyon’s offense enough to force two crucial stops. Two simultaneous penalties in its own half gave Green Canyon no choice but to punt the ball back to the Panthers, who quickly drove down and into the end zone to shrink the lead to 36-29. The next series for Green Canyon could have won the game if executed to perfection, and advanced the team to the semifinals.

A bad snap and a delay-of-game penalty handed the Wolves the unenviable situation of 2nd-and-22 at their own 32 yard line. Then something extraordinary happened. Receiver Ty Spencer fought of two defenders and a possible holding call to catch a 38-yard bomb from Lundin, setting the Wolves up at the 30 yard line with just over four minutes left in the game. However, the run game wasn’t able to move the sticks and Green Canyon was left with the decision to go for it on fourth-and-five or kick a 41-yard field goal.

The field goal was missed short and Pine View launched a 79-yard pass and completion on the next play to even the score back up, this time at 36-36. There was some controversy surrounding the extra-point attempt after Pine View’s touchdown, some people thinking

it was pushed wide right and over the upright, but the point stood and the Wolves had the ball and a chance to take the lead.

Green Canyon couldn’t do anything with the ball and dropped its best chance to move into the red zone before it punted the ball back to the Panthers. With one minute left in the game, the Panthers did what their opponents could not do: drive the length of the field and score a touchdown.

Although his team couldn’t advance to the next round and have a chance at the title, Anhder appreciates the progress his team made throughout the season.

“They’ve improved on an attitude and they’ve gotten better,” he said. “You know, for three years, we’ve been the underdogs. And this team came out and got a four-seed, they got home playoff games, they’ve played very hard. I’m very proud of them. They’re just a great bunch of kids that did something that’s never been done before.”