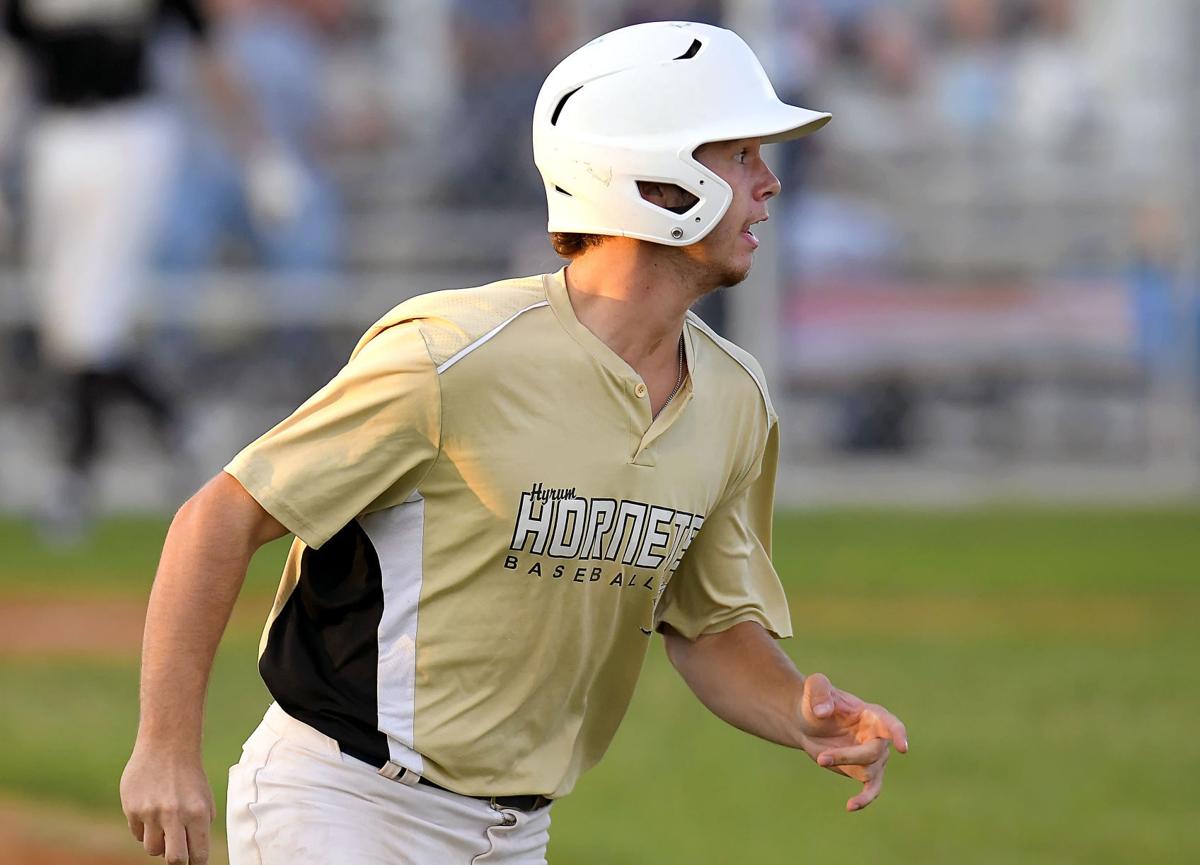 Hyrum’s Tadon Burbank watches the ball clear the fence for a three run homer against Logan on Tuesday in Hyrum.

Logan’s Ryan Callanan, left, and Tyler Gravem dive for a ground ball against the Hornets on Tuesday in Hyrum.

Hyrum’s Tadon Burbank watches the ball clear the fence for a three run homer against Logan on Tuesday in Hyrum.

Logan’s Ryan Callanan, left, and Tyler Gravem dive for a ground ball against the Hornets on Tuesday in Hyrum.

HYRUM — It’s been somewhat of an up-and-down season for the Hyrum Hornets, but the baseball team comprised primarily of Mountain Crest graduates is certainly peaking at the right time.

Hyrum exploded for 14 runs in the bottom of the second and increased its winning streak to three games with a 15-3 victory over the Logan Royals in five innings on Tuesday night. In the process, the Hornets leapfrogged the Royals into second place in the Northern Utah League standings.

“It was definitely (a) huge (win),” Hyrum shortstop Tanner Leishman said. “We’ve just got to keep winning, keep playing like we can, how we are capable, and hopefully we come out the best that we can (at the tournament).”

Logan pitcher Kolby Smith was able to work his way out of a bases-loaded jam in the first inning and didn’t allow a hit until Jaxon Burbank, batting in the No. 9 hole for Hyrum, singled with one out in the second. However, the Hornets fared much better their second time around in the batting order.

“I just think at the beginning of the game we’re all kind of tight and jittery, and then we get a little bit more loosened up and just have more fun up at the plate and start hitting the ball better,” Leishman said. “And, like you said, hitting’s contagious and so as soon as it starts, it just keeps rolling.”

“Oh, it’s super fun, just being able to go out and play with some of your best friends and be successful at the game, and just having fun,” Leishman said. “There’s nothing better than that.”

Hyrum’s gigantic second frame was highlighted by a three-run homer over the fence in left-center by recent Mountain Crest graduate Tadon Burbank. The towering tater traveled at least 380 feet.

“Off the bat, it didn’t feel too good, but I knew it had the height,” said Burbank, the 2019 Herald Journal All-Valley Player of the Year. “I just didn’t think it had the distance to get out, but it felt good to homer.”

Hyrum plated its other run in the bottom of the fourth on a line-drive single by Jake Nelson, who finished with a pair of hits and RBIs.

The Royals (18-12, 12-10) also had some quality at-bats as they accumulated eight hits, including multiple base knocks in the third, fourth and fifth frames. Logan scored its first run on a well-struck double down the third-base line by Brayden Anderson in the top of the third, and two more in the fifth inning. Eddie Saucedo had a RBI single that took a funny hop off first base, and Tyler Gravem ripped a RBI double to center that traveled at least 380 feet.

Lead-off batter Ryan Callanan singled twice and scored a run for the Royals, who also got a double from Todd Allen.

Leishman contributed with three RBIs, two hits and two runs for the Hornets, who got a pair of hits, runs and RBIs from Jase Burbank, a pair of hits and runs from Jaxon Burbank, and two runs, two walks, a hit, a RBI and a stolen base from Jarrett Hunt. Bradfield reached base in all four on his at-bats for Hyrum, which will host Logan on Saturday night in the regular season finale for both teams.

This was the first time all three Burbank brothers played in the same game.

The NUL Tournament starts next Tuesday. The Smithfield Blue Sox (23-5, 17-5) have secured the No. 1 seed for the five-team tourney.

Providence scored four times in the bottom of the fifth — three on a homer by Jory Jensen — to pull away from Northern Utah (3-19, 3-18). The game was deadlocked at 5-all after four frames.

Jaxon Hill also deposited a pitch over the fence and scored three times for the surging Wolverines (12-10, 11-10). Jensen drove in four runs, while Braxton Pond doubled twice and chipped in with three RBIs for Providence, which got a trio of hits from Shawn Triplett — one of which was a double.