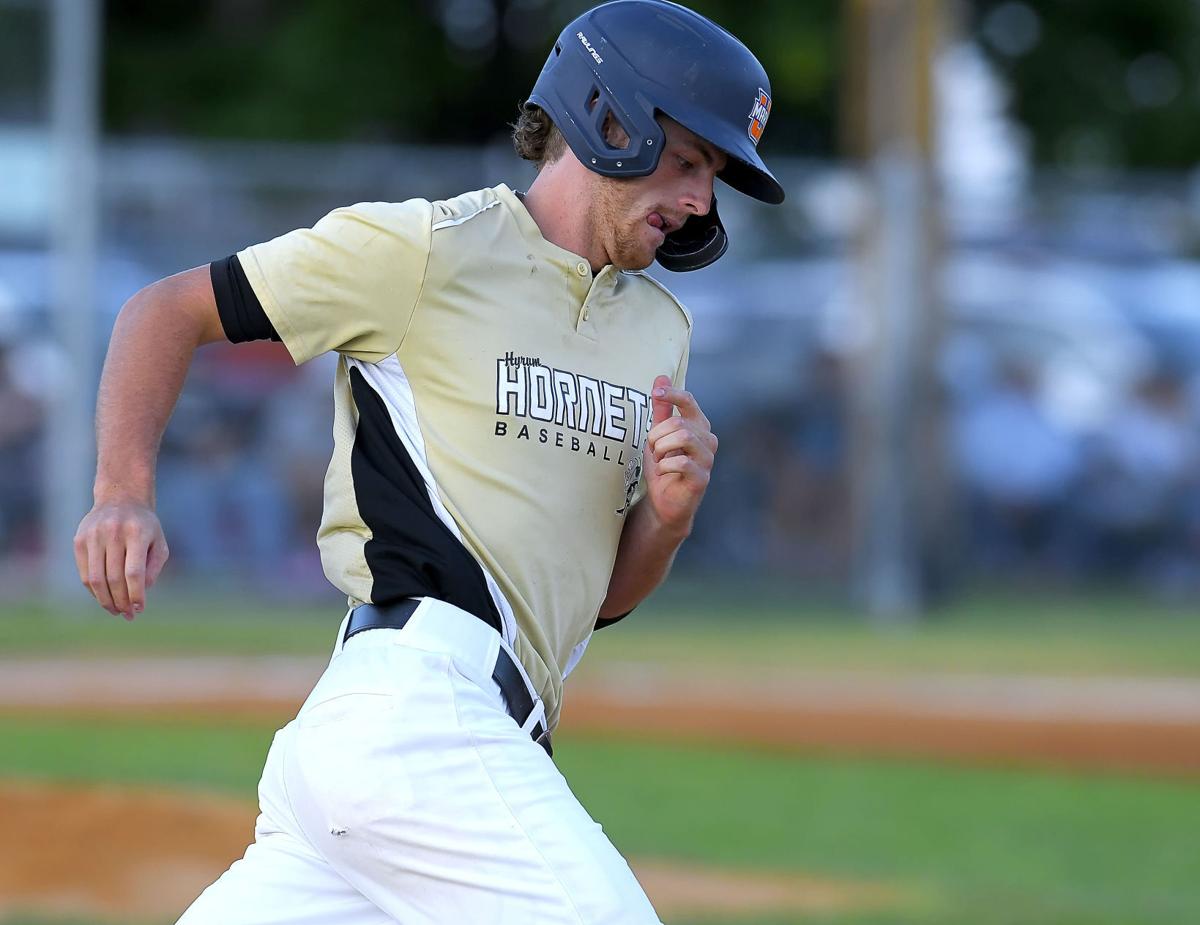 Hyrum's Ty Jones rounds the bases after hitting a two run homer against Smithfield on Monday in Hyrum. 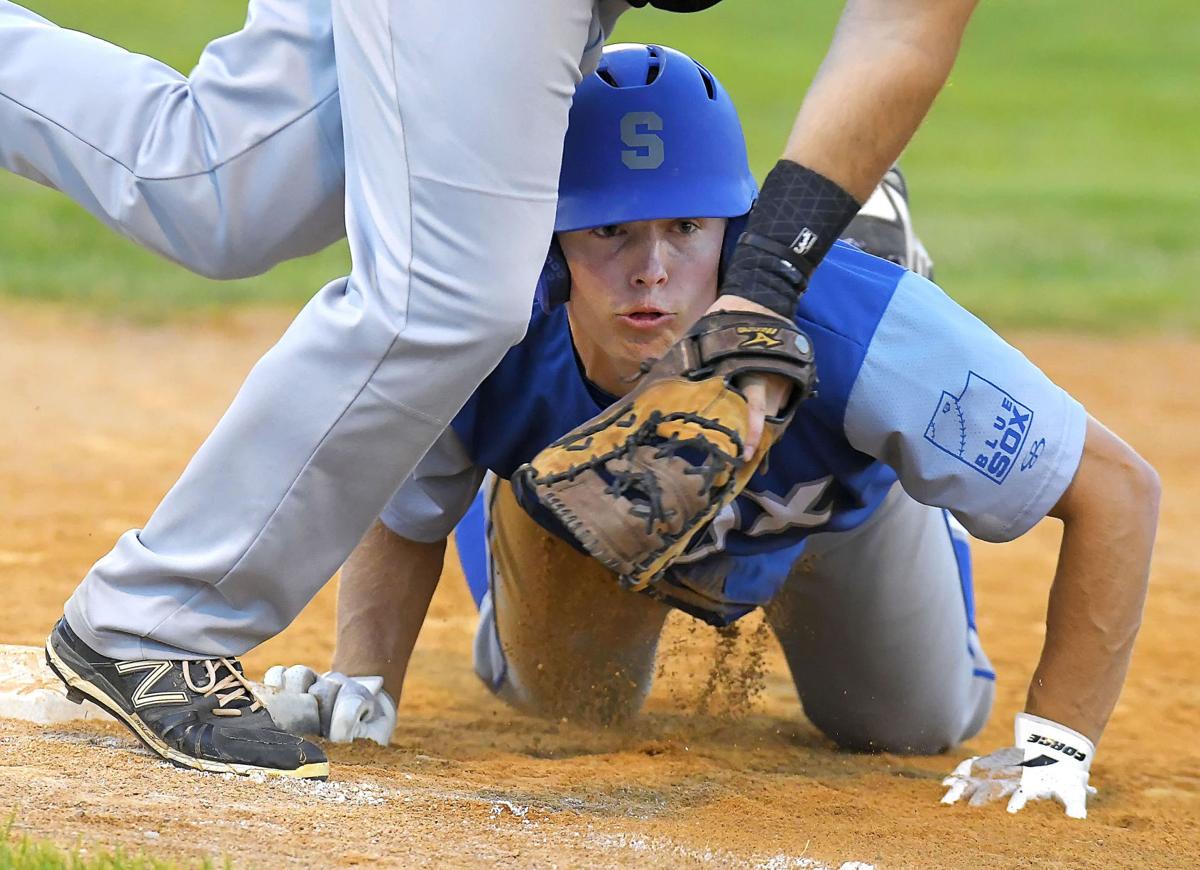 Smithfield's Tyler Walters dives back to first base before getting tagged by Hyrum's Ptolian Takis on Monday in Hyrum.

Hyrum's Ty Jones rounds the bases after hitting a two run homer against Smithfield on Monday in Hyrum.

Smithfield's Tyler Walters dives back to first base before getting tagged by Hyrum's Ptolian Takis on Monday in Hyrum.

HYRUM — Four errors certainly loomed large for the Hyrum Hornets in their 11-10 loss to the Smithfield Blue Sox last Saturday in Game 1 of the Northern Utah League championship series.

The Blue Sox were able to overcome a big deficit for the second time in four days — this time 7-0 after two innings — to push one of their main rivals to the brink of elimination.

It’s fair to say the Hornets were hungry for some redemption, and they got it thanks to their defense. Hyrum make several timely defensively plays, including a pair of game-changing double plays, en route to a 3-2 victory over Smithfield in front of a large Monday night crowd.

“Yeah, for sure (we were motivated),” Hyrum second baseman Jaxon Burbank said. “It was definitely not a night any of us wanted to remember on Saturday, but yeah we definitely came here with a clean slate, didn’t want to remember that, wanted to put it behind us and I think we did. I mean, we held them to two runs, which is a big deal.”

The Blue Sox enjoyed a 9-5 advantage in hits and also walked more than the Hornets in Monday’s showdown, but left at least one runner on base in every inning. Smithfield stranded 13, including eight in scoring position, while Hyrum only left four on base.

Hyrum’s defense had a lot to do with Smithfield’s struggles with runners on base. Burbank and third baseman Hayden Simper made two huge defensive plays apiece for the Hornets — one by each of them that resulted in a double play.

“Oh, it was definitely key,” Burbank said. “On Saturday we made quite a few errors, missed some pop flys that probably cost us the game ultimately, but here we were rock solid. And even though it was a 3-2 ballgame, pretty low scoring, by Ty Jones and Brantzen (Noble) came up big with two home runs, and that’s all we needed.”

Indeed, all three of Hyrum’s runs were plated on a pair of swings. Jones lofted a two-run bomb over the fence in left in the bottom of the first, and Noble lined a solo shot over the fence in center three innings later.

“Well, I was just looking for a pitch to hit and I saw it and made the most of it,” Jones said of his dinger.

To his credit, Smithfield pitcher Cody Godfrey bounced back nicely from those two homers. The veteran went the distance on the mound, scattered five hits — all of them in two innings — struck out six and walked four. Godfrey, who also executed a nice pick-off move to record an out at first base, got stronger as the game progressed as he fanned four straight batters in the fifth and sixth frames.

It was also a clutch pitching performance from Hyrum’s Nic Rasmussen, who allowed nine base knocks, but executed some of his best pitches seemingly every time the Blue Sox threatened to seize the momentum. The former Bear River star recorded his fifth strikeout of the contest to slam the door in the top of the seventh.

Rasmussen held the Blue Sox scoreless until they broke through with single runs in the fourth and fifth frames. Smithfield plated its first run on a single by Dawson Barson, and its second one when Zach Hansen roped an Rasmussen offering into left field for a single.

The Blue Sox advanced runners to second and third in the top of the fifth and were primed to take a 4-3 lead when Braden Anderson lined a pitch up the middle. However, Burbank made a leaping catch to allow the hosts to extinguish the flame.

“Oh, it feels great,” Burbank, who singled and walked in two of his two plate appearances. “That line drive up the middle was kind of tough, got in the lights a little bit. But yeah, it felt great to get us out of the inning and get out of those jams.”

Jordan Hansen shined at the plate for the Blue Sox as he doubled, singled, walked and was plunked. Zach Hansen and Barson both chipped in with two hits for Smithfield.

This was the third time this summer a Hyrum-Smithfield game has been decided by a single run.

“Yeah, we’ve had some close games with them and the other night we didn’t have the defense, and we had a lot of good D tonight behind Nic, and it really paid off,” Jones said. “So, if we can keep doing that tomorrow night, I think we’ve got a good shot at taking it.”

Hyrum exploded for seven runs in the top of the second, but Smithfield went off for 10 runs one inning later. The Hornets scored twice in the sixth inning to pare their deficit to 11-10, and they had runners on second and third with two outs, but Smithfield closer Zach Hansen came through with a big strikeout.

Chase Mercado went 3 for 4 at the plate with two doubles, three runs and two RBIs for the Blue Sox, who got three RBIs, two hits and two runs from Jordan Hansen, and a pair of hits and RBIs from Rhett Nielson.

Ptolian Takis and Jarrett Hunt contributed with two hits and three RBIs apiece for the Hornets. Takis also fared well on the mound as he limited Smithfield to one run on four hits in three complete innings.

Kade Hansen replaced Smithfield starter Colton Draney on the bump in the second inning and put the clamps on Hyrum. The recent Ridgeline High graduate only allowed one run on two hits, and fanned seven in three and one-third innings.