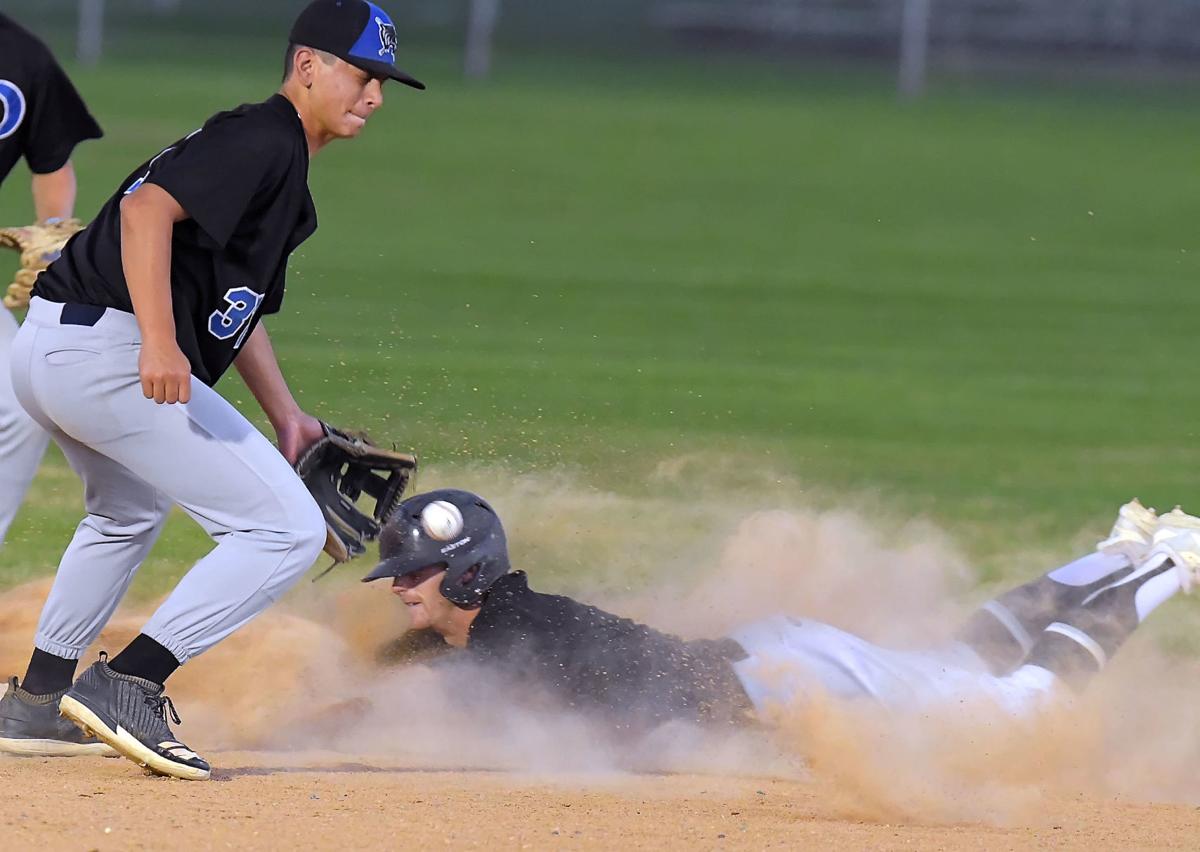 Hyrum’s Ty Jones steals second base as Providence’s Jaren Hale tries to field the ball on Friday in Hyrum. 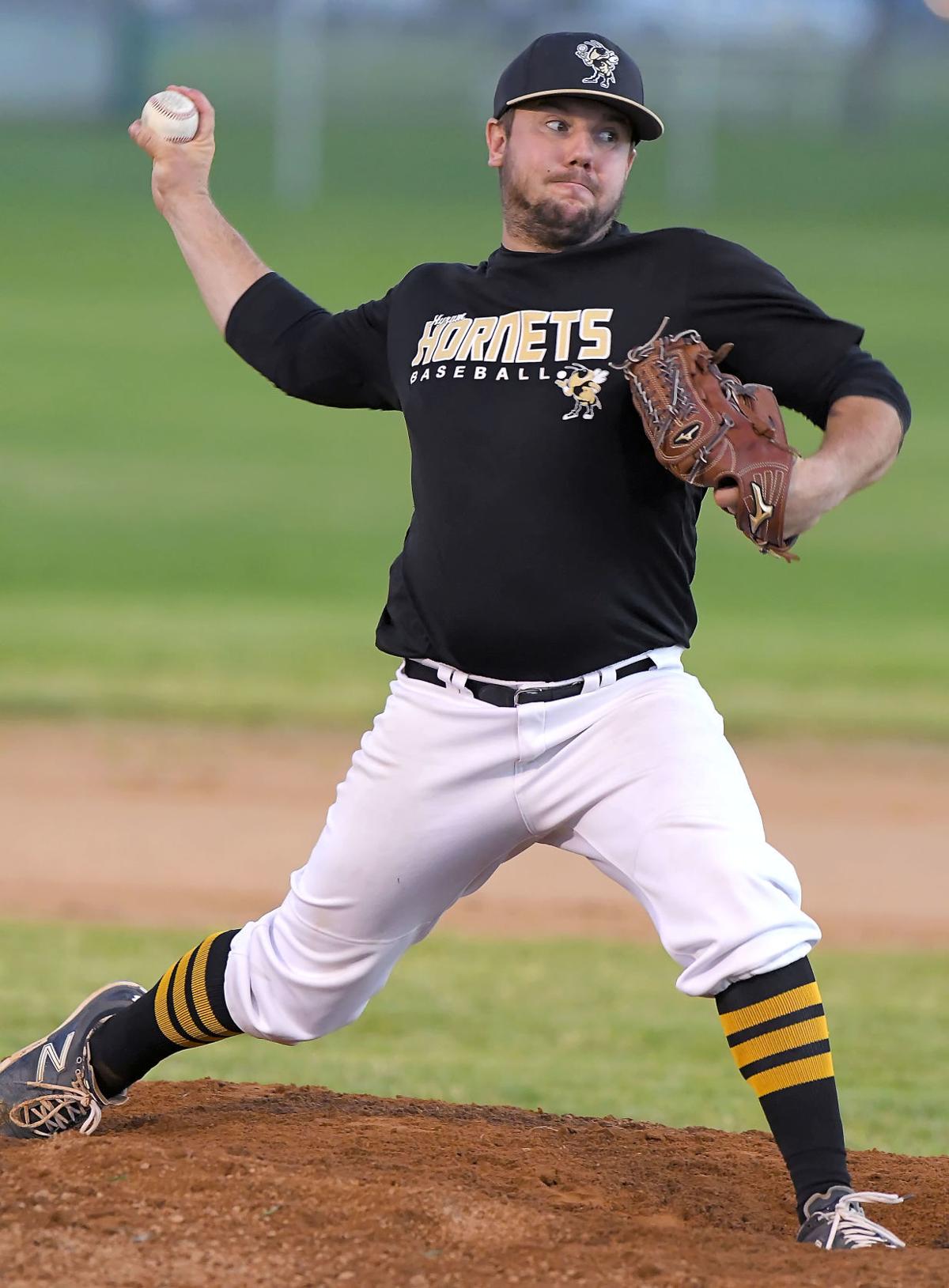 Hyrum pitcher Ptolian Takis throws the ball in the fourth inning against Providence on Friday in Hyrum. 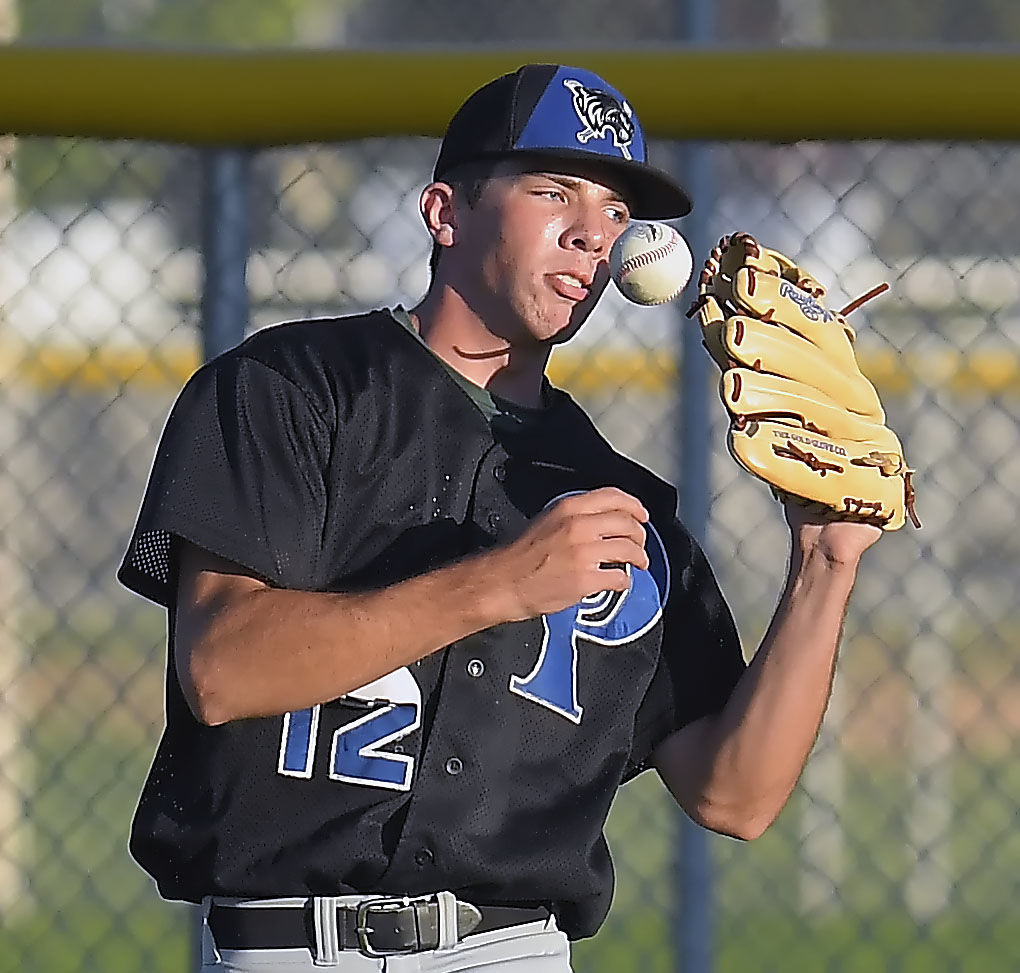 Providence right fielder Jack Burr misjudges a fly ball in the first inning against Hyrum on Friday. Burr was able to pick up the ball and threw out the runner at second base.

Hyrum’s Ty Jones steals second base as Providence’s Jaren Hale tries to field the ball on Friday in Hyrum.

Hyrum pitcher Ptolian Takis throws the ball in the fourth inning against Providence on Friday in Hyrum.

Providence right fielder Jack Burr misjudges a fly ball in the first inning against Hyrum on Friday. Burr was able to pick up the ball and threw out the runner at second base.

HYRUM — Flared tensions tagged a sour note onto the end of a quality 10-0 survival win by the Hyrum Hornets over the Providence Wolverines in Game 2 of the three-game Northern Utah League playoff series between the two.

Those tensions boiled throughout the frustrating night for the Wolverines until the breaking point in the fifth inning. Providence’s starting pitcher Spenser Triplett plunked Hyrum first baseman Jarrett Hunt (after putting a fastball right over Hunt’s head on the previous pitch) and the two former Mountain Crest teammates exchanged heated words, eventually being separated by coaches. Triplett was ejected by the umpire in quick order following the play.

Substitute pitcher Ryan Greer made it just four pitches into the first batter of his relief effort before he had to watch Ty Jones (another Mustang alum) crank a walk-off three-run homer over the left-center field fence that completed the mercy rule requirement before the end of the fifth inning.

The home run didn’t help calm the still smoldering tensions from five previous pitches. A few Hyrum players called out about the three additional runs which preceded (and may have sparked) a Providence bench member to disdainfully toss Jones’ discarded bat back across the plate toward the Hornets’ bench, along with a sarcastic taunt. The two sides nearly refused to shake hands, but cooler heads prevailed and both teams exchanged terse high-fives.

“Tempers flashed, it’s what happens in competitive athletics,” Hyrum head coach James Hunt said after the game. “It’s my job as the coach to be the cooler head, get out there. I say it’s recreational, the Northern Utah League, but at the same time it’s competitive and you’ve just got college-aged boys and testosterone’s flowing and that’s what happens.”

In contrast to the inconsistent pitching from Triplett — he fanned seven batters but gave a free pass to 11 (six walks and five hit batters) — Hyrum ace Ptolian Takis threw a masterful one-hit shutout across his five complete innings — a performance that saved the Hornets from elimination after Providence prevailed 11-4 on Thursday in Game 1.

“It meant pretty much everything,” Takis said of the timing of his performance. “This is do or die right here.”

“He’s been a big-game pitcher since he was nine years old,” coach Hunt said of Takis, noting that he’s coached Takis since that early age. “I’ll put him out there at any time and I know what I’m going to get.”

In Game 1, Providence peppered the field with 10 hits and benefited from 11 walks on Thursday. When asked if he had any specific plan to lower either or both of those numbers, Takis said his strategy was simple.

“Honestly, just throwing strikes,” Takis said. “If I could just keep it over the plate, let them hit the ball and trust my defense, things were going to work out.”

That trust in the defense paid plenty of dividends as they put out 11 runners with Takis only tallying three strikeouts in his time on the mound.

Hyrum’s performance at the plate didn’t go too much better than Providence’s effort, at least by raw numbers. The Hornets got five hits to the Wolverines’ one. But the timing proved invaluable to the eventual 10-run outing for the victorious home team.

“We didn’t hit any bombs except for the last one tonight,” Hunt said. “But base hits and putting the pressure on the defense can force errors and force the pitcher out of his game.”

The rubber match will take place at Providence on Saturday, with the first pitch scheduled for 7:30 p.m.

Chris Needham made sure Gate City’s season didn’t come to an end.

Needham pitched a complete-game four-hitter to propel the Grays past visiting Smithfield. All four Blue Sox hits were singles, and Needham struck out 11 and only walked one.

Hayden Folz and KC Qualls contributed two base knocks and two RBIs apiece for Gate City. Folz doubled for the game’s only extra-base hit. The Grays plated four of their runs in the bottom of the fifth to take control.

The Blue Sox will host the Grays on Saturday night for a spot in the NUL championship series, which will start next Monday.