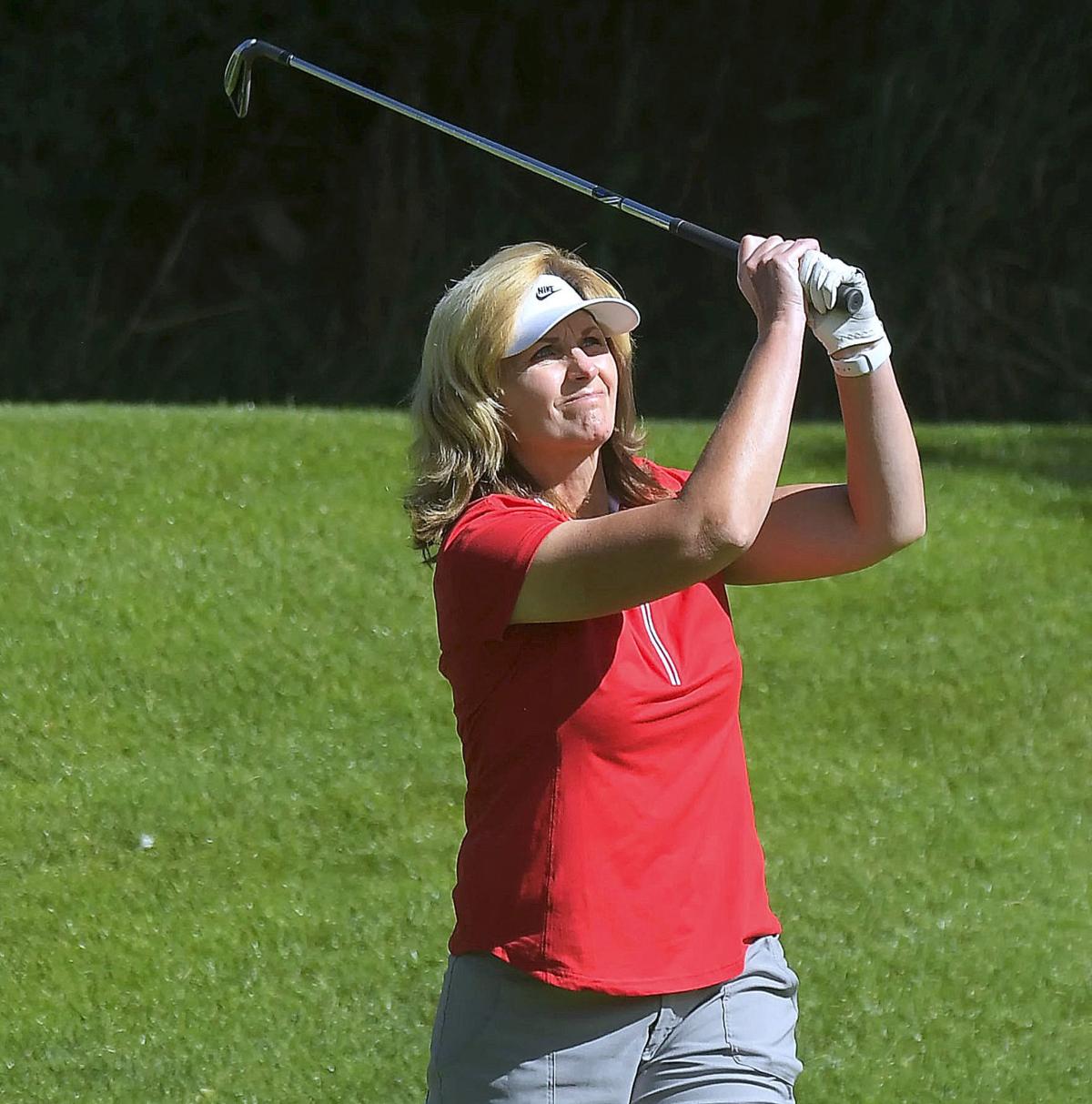 Julie Hugie hits her tee shot on the second hole at the Logan Country Club on Tuesday. 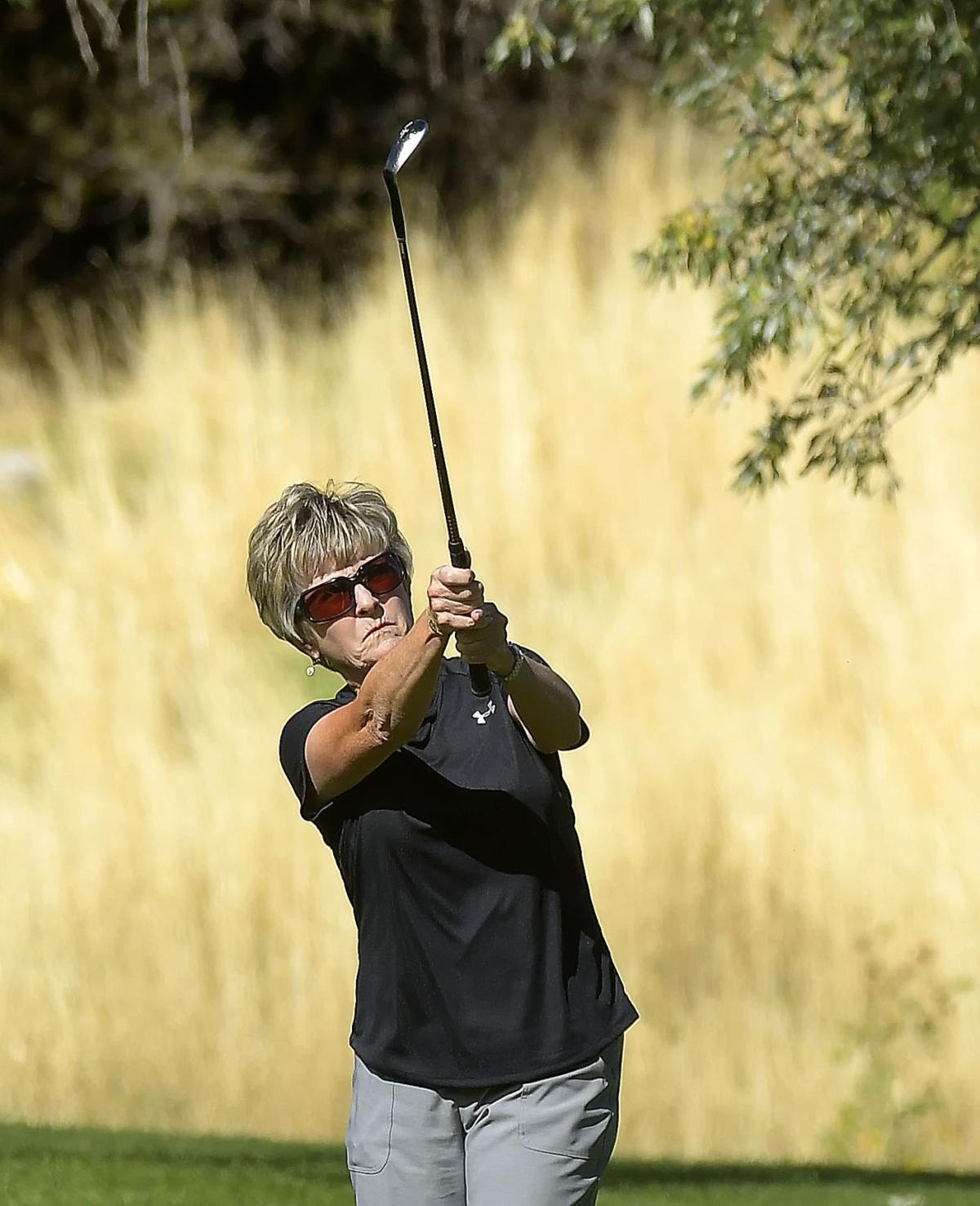 Cindy Bangerter hits the ball on the first hole at the Logan Country Club on Tuesday.

Julie Hugie hits her tee shot on the second hole at the Logan Country Club on Tuesday.

Cindy Bangerter hits the ball on the first hole at the Logan Country Club on Tuesday.

Julie Hugie defended her Ladies Club Championship Tuesday with ease. She carded the best round of the three-day tournament by anyone during the final 18 holes Tuesday at the Logan Country Club.

“It was a good tournament for me,” Hugie said. “I was very consistent all the way. I just tried to hit the fairways and get on in regulation. And it worked out.”

Yes, it most certainly did.

She shot a 5-over-par 77 in the final round to win by 24 strokes. She started Tuesday with a 10-stroke lead.

“I try and not even think about it,” Hugie said of being in the lead. “I just try and get pars. If I can get on in regulation and two-putt, that’s what I’m trying to do. ... Your heart is always pumping, and that makes you play better. You want to do well.”

The 52-year-old from Logan began the tournament with an 83, then shot a 88. She saved the best for last. Hugie finished off her final round with a birdie on No. 18.

“It was a little better today,” Hugie said. “It just felt good and natural. I was hitting the greens. ... I hit a heck of a drive (on 18), so my approach shot was easier. It kicked left a little, luckily, and curved in for a birdie.”

Putting went well for the champion. Hugie pointed out that part of her game was on and helped her have a good tournament.

She got off to a good start with a string of pars and an early birdie. That helped her keep the momentum going for the rest of the final round.

She and her husband have been members for eight years, and Hugie has played in the ladies tournament before. But the past two years have been good to her.

“I plan on coming back next year, of course,” Hugie said. “It’s a good ladies league up here. I have a lot of fun. They are good ladies, they are good golfers and it’s been fun to play up here. ... It’s good to play with these girls. They are good players and it makes you a better player.”

The top four ladies were paired together for the final round. Playing with Hugie were Nancy Brough, Cindy Bangerter and Norma Palmer. Bangerter was 10 strokes back, while Brough and Palmer began the third round 14 shots behind the leader.

Bangerter had a yo-yo sort of third round Tuesday. A rough hole was followed by a par, then another scramble. She hit a tree off the tee on No. 1 and couldn’t find her ball.

“It was a really fun round,” said Bangerter, who lives in North Logan. “... I ended up with an eight on No. 1, but came back and pared No. 2. I had a good round, but got in trouble on 16, had an unplayable, but still got a six, which I was happy about because I got a 10 the first day on 16. That last hole, I’m usually not on the green on two and would have been if I hit it straight. ... This is such a mental game. I was teasing the three (players) I was with that they are all such long bombers. I hit a good ball, but not as long as they do. I try to keep up.”

Brough made it close in the battle for second place. In fact, it came right down to the final hole. Despite Brough making a really nice birdie putt on No. 18, Bangerter was able to hold onto second by a stroke with a three-day total of 272. Brough was at 273.

“Nancy and I were tied all the way around until the last hole,” Bangerter said of the third round. “She birdied it and I got a six, but I was four ahead from the other two days, so I squeaked by one stroke.”

Brough had her best 18 holes on Tuesday, carding a 88. She knew trying to win the title was a tall order, but tried to play her best.

“Julie had a big lead on us,” said Brough, who lives in Logan. “I started out slow today, but I think I finished pretty good.”

Like the other ladies, Brough likes the camaraderie of the club. She has been a member for four years and felt good about playing the championship because “I’m old, so this was good.”

“We are all such good friends, (so) it’s hard to battle against each other,” Brough said. “You just go play your best and whatever happens, happens. Golf is a blast, right?”