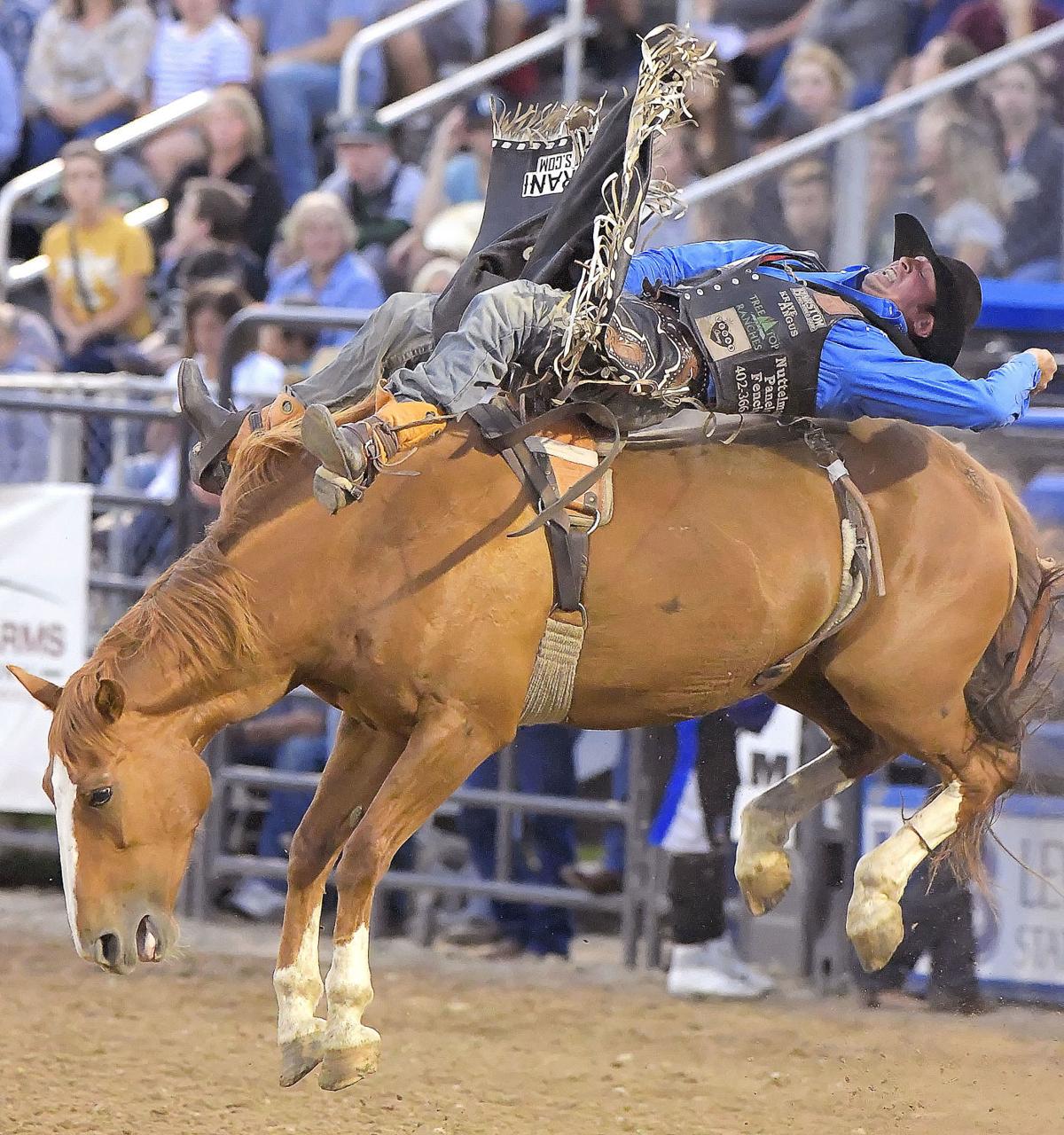 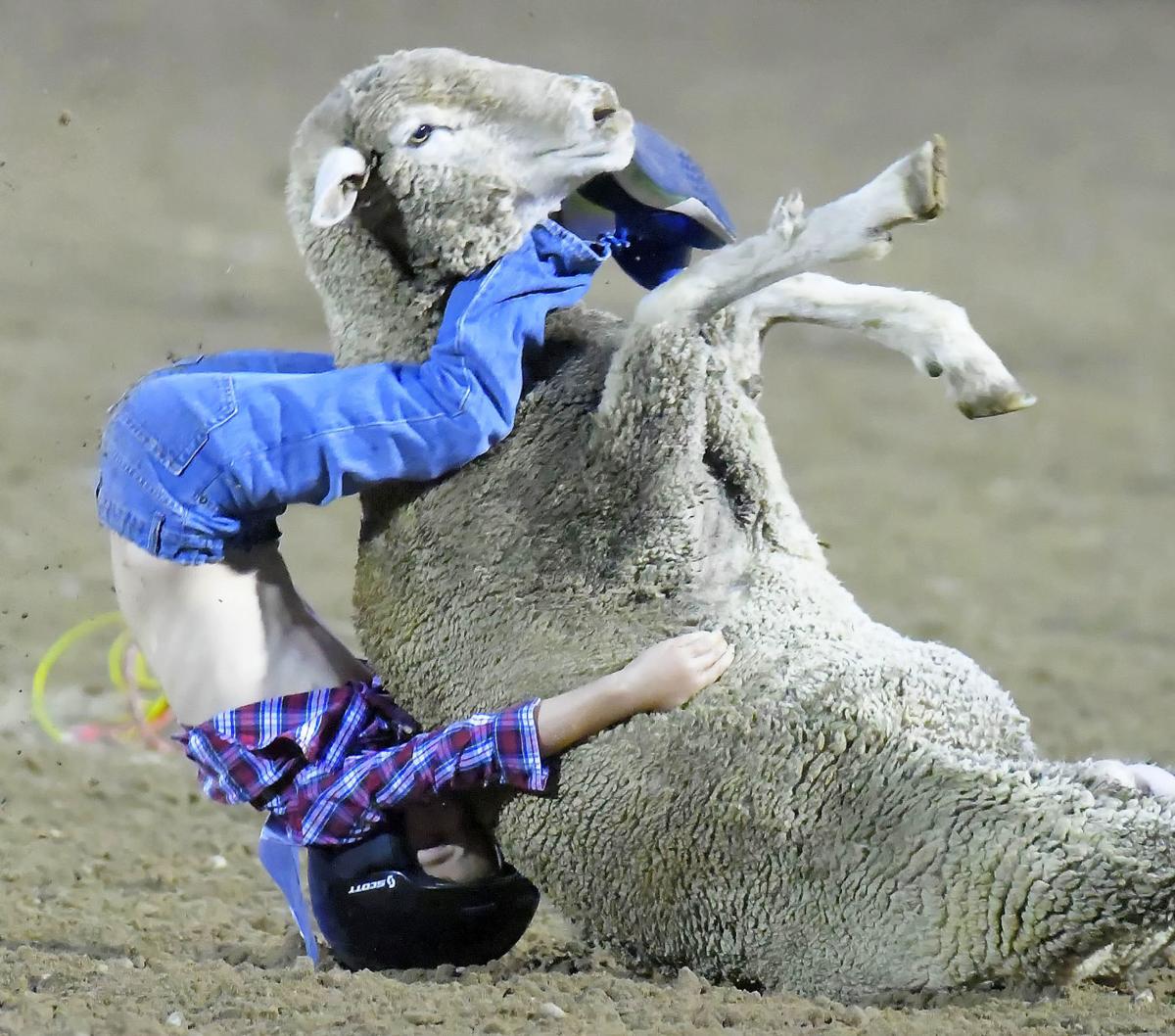 Hudson Ballard holds to continue his ride despite getting rolled by the sheep at the Cache County Rodeo on Thursday. 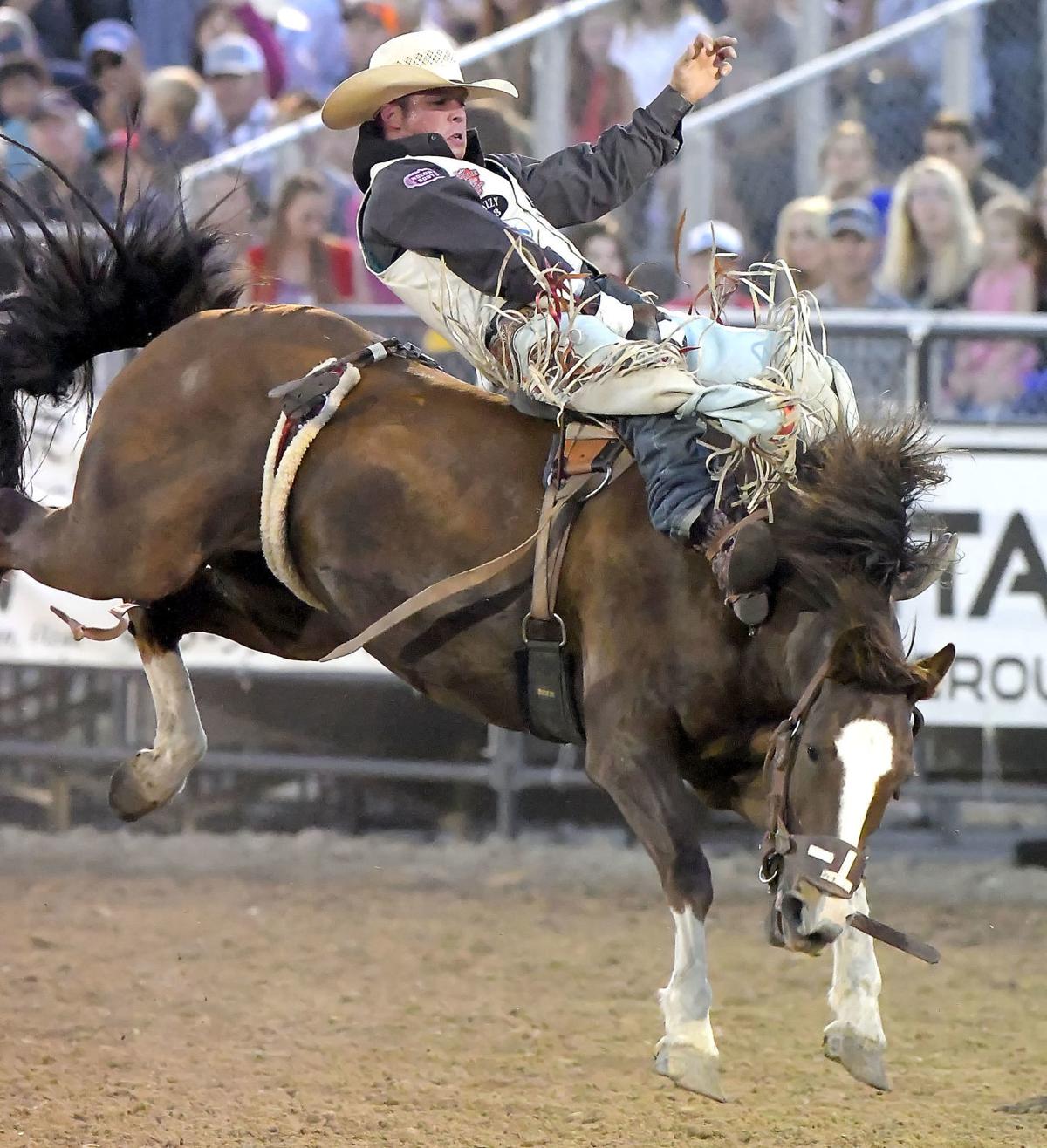 Hudson Ballard holds to continue his ride despite getting rolled by the sheep at the Cache County Rodeo on Thursday.

A trio of cowboys ended up tied when the dust settled after the first event of a star-filled group. Bennett, Champion and Dent each scored 84.

“All the best horses were up tonight,” said Dent, who won the NFR rodeo last year and finished second in the world standings. “All you can do is hope you are winning when you leave. The rest is out of your control.”

With a talented field competing to move up in the standings, the competitive juices get flowing when they get together.

“That’s what we want this time of year, best guys going down the road and getting on good horses for a lot of money,” Champion said. “Any time the judges can’t decide between three of you, you know you are doing your job, especially in this company. It feels pretty good.”

Bennett is very familiar with the Cache County Rodeo. Less than a year ago he called Tremonton home. He now lives in Corvallis, Montana.

The seven-time NFR qualifier began this week in sixth place.

“I’ve been pretty blessed with good horses and won quite a bit,” Bennett said. “This year has been good.”

Bennett had ridden Momma Mia before, scoring a 85. He was excited to get her in Logan.

“She kind of surprised me tonight as she bucked harder than she has,” Bennett said. “She kind of blew out of there. I gathered myself and was able to ride her pretty good and join these guys at the top.”

Bennett was the final rider in the event. He said he was gunning for a 88, but “fell a little bit short of that.” Still, he continued his streak of doing well at the rodeo just over the hill from his home town.

“I’ve won this rodeo a handful of times,” Bennett said. “It seems like I’ve always had luck here and placed. I think it is part of the Utah crowd. I thrive off of it.”

Champion, who is from The Woodlands, Texas, rode Bitter Times, a younger horse.

“That’s the best draw I’ve had in a while,” Champion said. “I was excited to have him. I needed to make a ride like that for my own good. It came at the perfect time for me.”

Sitting in fourth in the world standings, Champion is trying to set himself up for a run at a title. He has been to the NFR four times and is looking to make his fifth trip his best. In 2017, Champion was the runner-up.

“Every little bit helps,” Champion said. “I would like to have my fifth trip end with a gold buckle.”

Champion has done well at Preston before, but hopes to finally break through at Cache County. He certainly looks to have taken a step in that direction.

Bennett and Champion, who travel together, are headed to the Big Sky State next with rodeos this weekend at Bozeman and Missoula, Montana.

Dent called Echo Bay, a horse that has qualified for the NFR in the past, “real nice.” He is currently in eighth in the standings and has placed at Cache County before.

“I like this rodeo,” said Dent, who is from Mullen, Nebraska. “It’s a neat setting. This valley, when you drop over the mountains, it’s just really neat. People in Utah love rodeo.”

The success of the first two events did not continue. Perhaps some wild kids mutton bustin broke up the mojo of the good start.

In the team roping, the best time was turned in by Aaron Tsinigine (Tuba City, Arizona) and Patrick Smith (Lipan, Texas) with a run of 4.6. Both of those men have won world titles and been to the NFR numerous times. However, their times is not tops in team roping as a 4.5 was turned in Thursday morning in what is called slack — extra timed events competitors that don’t get into the rodeo.

A Utah cowboy ended up on top in the saddle bronc riding Thursday. Landon Meacham of Tropic rode Lady Vain — an NFR horse — to a mark of 83.5.

“That’s the first time I’ve been on that horse, so I was even more excited, just the anticipation,” Meacham said. “When you know they are great, you can’t wait to get here and get on. Super fun horse.”

The horse definitely stood out from the rest on Thursday.

“When they jump big and blow big in the air, that gives you time to reach up and set your feet,” Meacham said. “When you are long-legged like me, that’s good to get some extra time.”

In the tie-down roping, the fastest time also came in the slack at 9.1. During the rodeo, Brodi Jones of Erda was dang close with a 9.2. Jones struggled in tying his calf, or he would have taken the lead. Jones also competed in the team roping. He and Braydin Evans, also of Erda, stretched their steer in 5.7.

The wife of a header in the team roping (Garrett Tonozzi) that had one of the better runs during the rodeo shined in the barrel racing. Brittany Pozzi Tonozzi went last and blazed around the three barrels in 16.99. She has qualified for the NFR many times.

Bull riding capped the night. Of the 11 who tried, only three covered the eight seconds for a score. Jordan Hansen of Ponoka, Alberta, Canada, rode Day Light to a mark of 78. The bull went into a spin, and Hansen rode to the early lead.

“In bull riding, spinning is where the points are,” Hansen said. “Spinning is key. I was hanging on and made it to the end.”

Hansen began the week in 16th place, just $130 out of that coveted top 15. He was injured in the early going of this year, but has been making up lately as he won at Heber City last week and placed at Preston.

“I’m trying to finish off the season real strong,” Hansen said. “Utah has treated me excellent this last week.”