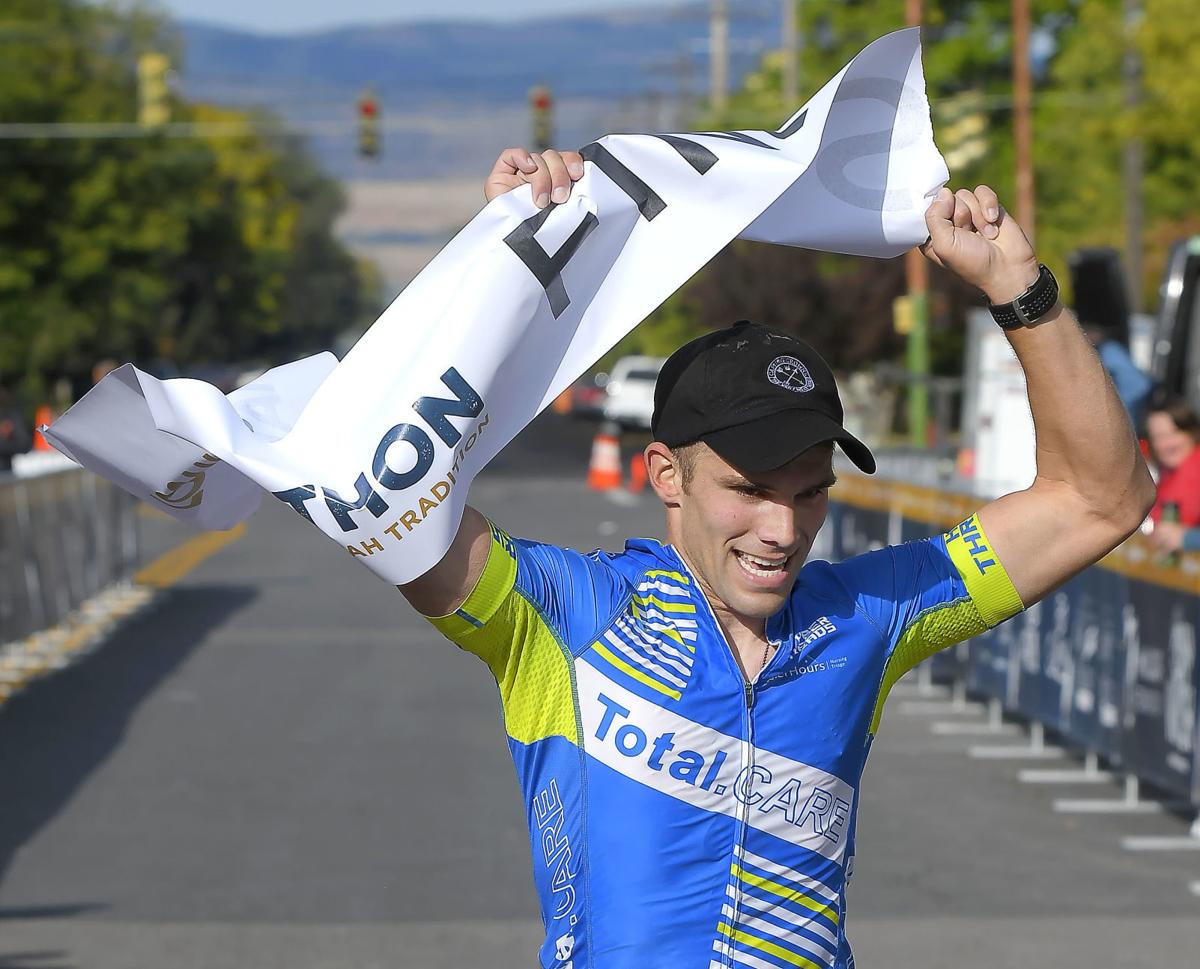 Jesse Dunn celebrates as he crosses the finish line to win the Logan Marathon on Saturday. 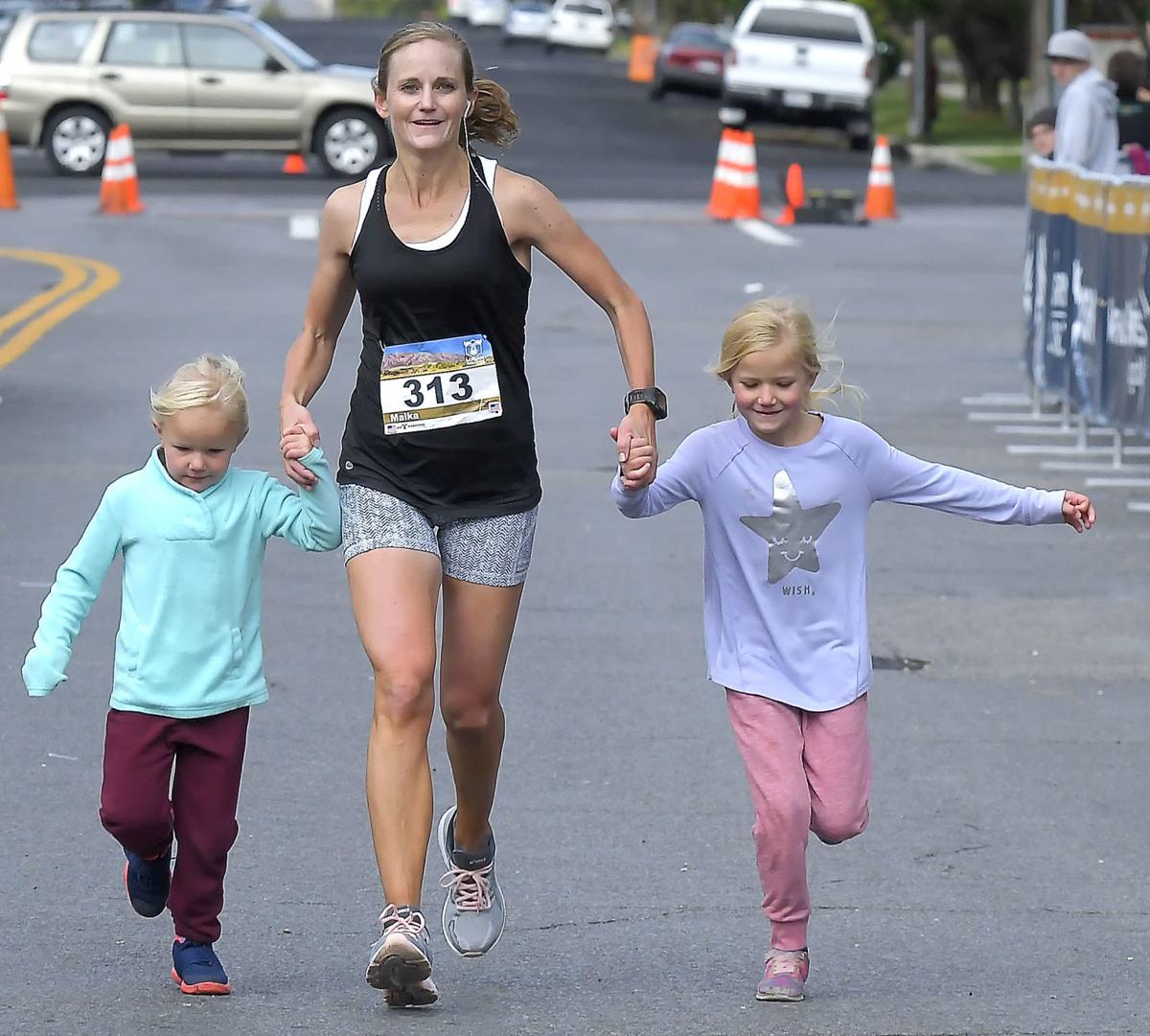 Maika Carlsen runs with her children Ashley, left, and Claire as she approaches the finish line to win the female division in the Logan Marathon on Saturday.

Jesse Dunn celebrates as he crosses the finish line to win the Logan Marathon on Saturday.

Maika Carlsen runs with her children Ashley, left, and Claire as she approaches the finish line to win the female division in the Logan Marathon on Saturday.

A couple of local athletes were the first to claim titles in the inaugural Logan Marathon Saturday.

After 20 years of the Top of Utah Marathon coming down Blacksmith Fork Canyon and making its way to Merlin Olsen Park on the east side of Logan, the race was sold to Troy Oldham. The new marathon unveiled a new flat course, starting in downtown Logan, working its way through the southwest part of the valley to Mendon and then back.

Cool temperatures and mostly overcast skies made running conditions ideal. Familiar faces to races around Cache Valley were the first male and female to cross the finish line on 100 North between 100 West and Main Street. Jesse Dunn and Maika Carlsen were the top male and female, respectively.

Dunn went out and set the pace early and never looked back. He led from start to finish and crossed the finish line in 2 hours, 44 minutes and 13 seconds.

“It went well,” Dunn said. “I didn’t come into this race with high expectations. My only expectation was to have fun.”

“I was a little surprised from the very beginning,” Dunn said. “I was up front and thought I was going to tank, so I was a little nervous being up front the whole time.”

With no one on his heels, how did Dunn keep pushing himself?

“It’s a mental game the whole time,” Dunn said. “It’s one of those things where I could slow down and run with some guys or I keep going the pace I’m going. I just decided to keep going by myself and run the pace I was going.

The Logan native who resides in Sandy during the week as he is attending a police academy there had a bit of advantage on the new course, which helped as he said he has not been training much. He started the day with goal in mind.

“I thought the course was great,” Dunn said. “It’s my home stomping grounds; I’ve run the course almost every day.”

Dunn signed up for the marathon just two weeks prior. The last time he actually run a marathon was two years ago, placing in the top five at the Top of Utah Marathon. The 27-year-old triathlete has done well regionally and nationally in various competitions.

His time was a bit slower than other marathons he has run, but with an extremely flat course, that is expected.

Carlsen was hoping to go a bit faster, but like Dunn was not really pushed by any other women. In fact, she ran with men the whole way. Her time of 3:08:25 was more than nine minutes faster than the next female and good enough for 11th overall.

“I didn’t see any other women, but there were a couple of men I could keep my eye on and that helped me pace myself,” Carlsen said. “It gave me something to watch.”

Carlsen said she never saw LeMonnier, but was informed she had a gap on second place.

The 39-year-old who resides in Providence was trying to run a Boston Qualifying (BQ) time, so she was “grateful” the course was certified for Boston.

“That gave me a goal to shoot for,” Carlsen said. “I did want to be under 3:10, so I’m glad I did that, but my goals were a little faster that but I just didn’t have it in me today. I was happy with the result.”

She had hoped to run a sub 3:05 and really wanted to break three hours, which she was on pace for until around mile 15, where “maybe the wheels come or I wasn’t as trained as well as I thought I had.” Given the mother-of-three did not feel well the last six miles, she had to adjust at the end.

And Carlsen did get that BQ time by more than 20 minutes. She has run Boston once in 2004 and plans to return. With her time Saturday, Carlsen certainly has done her part to make a return trip.

Carlsen ran the Top of Utah Marathon a handful of times, placing as high as second. She was grateful to be back running well Saturday as last year at this time she had some back issues and couldn’t even walk for three months.

“To be here today and be able to run a decent, respectable time, I can’t be anything but grateful,” Carlsen said. “I’m lucky that my body rose to the challenge today.

“... It was a great event and I’m glad I did it. I had a hard day, but it was beautiful out there. It was fun to see people on the turn-around and fun to have people cheering for me all along that part of the course. It was a gorgeous day and there was lots of support. I think it was a great event.

“The weather couldn’t have been better, we got lucky,” Oldham said. “Today was good. It was a good turnout with a good mixture of runners. We didn’t have as many marathoners as we had hoped for, but we did have more do the relay. We had a good bunch do the 10K and 5K and everyone seemed to have a good time.”

The race director said his hope was he could earn the “trust” of runners by putting on a good event.

“We knew we were changing a beautiful run, but there still is the Top of Utah Half Marathon in Blacksmith Fork Canyon. For the most part, people liked the course. It’s very rural and a beautiful course and even if you live in the valley you probably run by some places that you didn’t know about.”

Oldham said there were runners from Illinois, Phoenix and Las Vegas. He was happy for a pair of local runners winning the races.

“Historically, this event has had a lot of local runners and winners,” Oldham said.