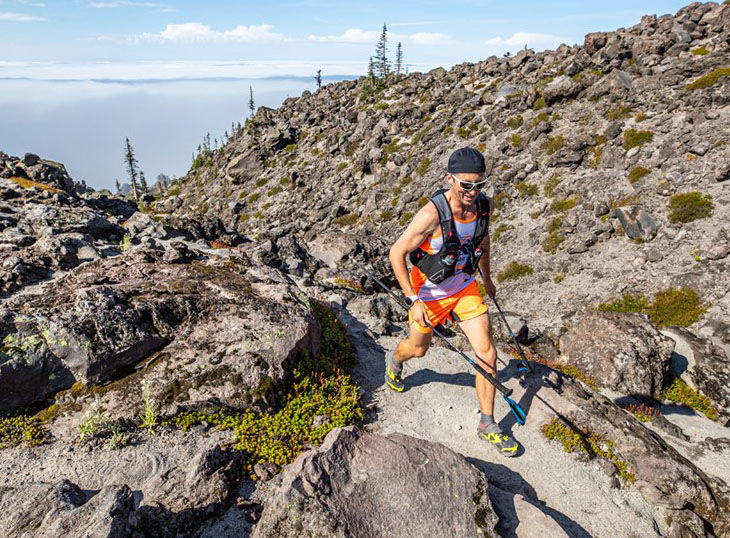 Cache Valley native Mike McKnight recently broke the course record at the Bigfoot 200 endurance race, which was held in Washington. 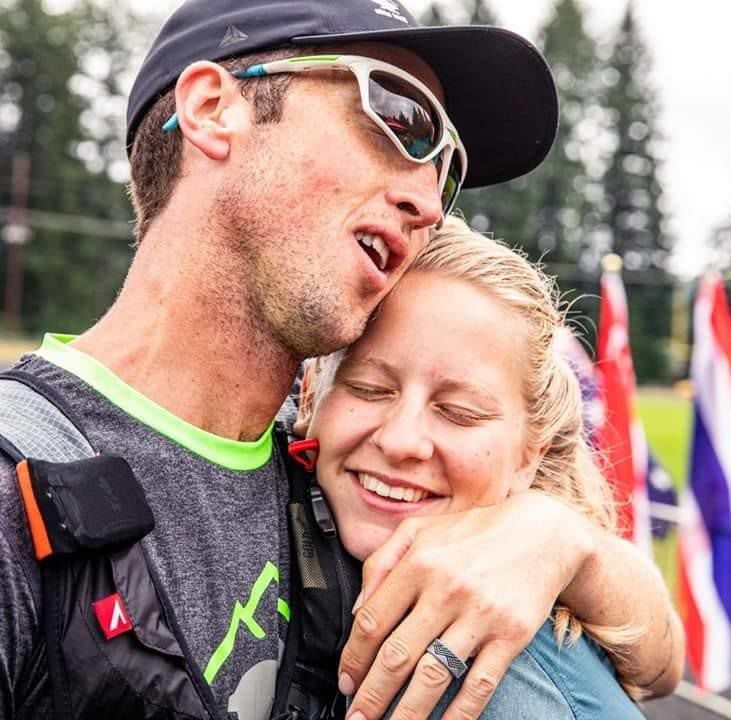 Cache Valley native Mike McKnight celebrates with his wife, Sarah, after breaking the course record at the Bigfoot 200 endurance race, which was held in Washington.

Cache Valley native Mike McKnight recently broke the course record at the Bigfoot 200 endurance race, which was held in Washington.

Cache Valley native Mike McKnight celebrates with his wife, Sarah, after breaking the course record at the Bigfoot 200 endurance race, which was held in Washington.

He never won any of the three races that are more than 200 miles long that make up the series and traverse mountains in the wilderness. However, he was consistent and had the best combined time of the three events. That was 2017.

McKnight served notice this past weekend that he is back and a serious challenger to win the Triple Crown of 200s again in 2019. He dominated at the first race in the series — the Bigfoot 200 in Washington State.

Using what he learned two years ago and not having any issues with his body, McKnight not only won the race but set a course record by more than four hours — 4:15:06 to be exact.

“Heading into Bigfoot, I had an overall goal for the Triple Crown of 200’s to lower my current record by 20 hours,” McKnight said Thursday. “To do that, I wanted to get sub 60 hours on Bigfoot. That would have been a 9-hour PR. I wasn’t eyeing the course record, though. That seemed to far out of my reach, especially with just doing Western States 100 a month ago.”

McKnight exceeded his goal and covered the course in 51:33:55. That was almost 18 hours faster than his time in 2017. He took seventh in that race.

“Two years ago I experienced stomach issues for the first 100 miles and really struggled to find a groove,” McKnight said. “This year I had no gut issues, and that made it possible for me to put forth a solid effort the whole race. Another major thing is experience with the distance. I did feel I held back quite a bit, almost too much, two years ago. This time around I knew what to expect, and knew I could push myself much harder than two years ago.”

Winning and doing so well helped lift his spirits after a tough go at the Western States 100 early this summer.

“I’m on cloud nine right now,” McKnight said. “Being able to break the already solid course record at Bigfoot is sweet. It’s even sweeter after a poor Western States. This was a good reminder for me it (Western States) was just a bad race, and I still have some wheels to work with.”

Like McKnight said, having done it before was a big bonus. He knew there was a big climb in the later part and elected to save his legs some in the early going when several runners took off.

“With this distance, it’s honestly better to start off slower,” McKnight said. “That being said, I did go harder than some other veteran 200 milers recommended to go. There is a gray area where you hold back slightly, but not too much. For the first 10 miles, I was right up with the leaders. But as soon as we hit some downhills, they started running a sub 8-minute pace. For how we felt that early on, that speed wasn’t bad. But I knew it was important to save my quads for later and took it down to a slower, but still brisk, 8:50ish to 9:10ish pace. They pulled away, but I had confidence my quads/legs would hold up longer if I was patient.”

And he was right.

For the first 90 miles the former Smithfield resident was bouncing back and forth between fourth and fifth place. At mile 90, two runners elected to take a nap and he pressed on. He stayed in front of those guys the rest of the way.

Over the next 45 miles he would come into aid stations and find out he was gaining on the two runners ahead of him. At the aid station at mile 145, he had caught them. The runner in first was tying his shoes and getting ready to leave.

“I quickly ate some food and left at the same time as (the runner in) first,” McKnight said. “I could tell he was getting tired, but I held back slightly for a couple of miles to observe him run. I wanted to make sure he was really tired. Once I knew he was in a low spot, I passed him.”

But five miles along the trail the runner he had caught at the last aid station when he was in third passed him. McKnight did not panic.

“He was looking good,” McKnight said. “But from watching him run, I knew that he was struggling on the ups, and there was still a lot of uphill left.”

When they got to mile 160, one of the biggest climbs of the course was ahead. McKnight “took off.” He quickly built a 20-mile lead that he maintained to the finish. Once in front, he continued his same strategy.

“I largely contribute that to taking it easier on the downhills and really focusing on power hiking the ups, overrunning,” McKnight said.

How does he feel once he reached the 200-mile mark?

“At that point, you are excited and ready to be done, and six miles seems like nothing,” McKnight said of the last 6.5 miles to the finish. “The final 40 miles of Moab are a struggle, though. What can really be hard mentally is realizing at the 40-mile mark of Moab that you still have 200 miles to go. At that point, it has been sevenish hours, and it feels like you’ve done nothing.”

McKnight does a lot of 100-mile races, but how does one even prepare to run a race twice that distance?

“The main difference is practicing a lot of power hiking,” McKnight said. “A major determining factor of your success at this distance is how fast you can hike. It’s inevitable that you’ll start power hiking at one point of the race, and if you are hiking faster than everyone else, you can make up a lot of ground.

“At the start of Bigfoot, the guy in first the majority of the way ran all of the ups. I power hiked them with a mix of light running. He completely exhausted himself and started death marching towards the end of the race, while I was able to maintain a solid hiking pace. The other major thing you need to figure out is how to run right after taking a nap. I think it’s smart to do one or two training runs where you run back to back long distances, but with two to three hours of sleep in between.”

Fueling is also tricky and takes time to figure out. He said taking time to “regroup” at aid stations is a must. In this race, some aid stations are four or five hours away.

“You could really pay for it later if you leave an aid station in five minutes over 15 minutes and don’t get the needed calories your body is craving,” McKnight said. “My fuel strategy changed each day. On Day 1, I ate more simple carbs like GU/Honey Stinger/Spring Energy Gels. I would eat potato chips as well. On day two, I ate more real foods — bunless burgers, soup broth, mashed potatoes. On both days, I would drink a fruit smoothie every time I came into the aid station. It’s also important to maintain salt levels to avoid stomach/digestion issues and body cramps. I would take a salt supplement every 30 minutes. For my liquids between aid stations, I would drink an electrolyte mix called Gnarly, along with grape and apple juice and water.”

According to his Strava — an app that tracks all sorts of categories for athletes — he burned 35,000 calories at the Bigfoot 200. How does he replenish that many over just more than two days?

“A lot depends on your body and how you digest foods,” McKnight said. “I follow a lifestyle where I train my body to burn fat as its primary fuel source. Because of this, I can eat slightly less calories than the average runner, which makes it so I have less chances of developing digestive issues.”

Making shoe and clothing changes was also essential. He would try and put on some different shoes every 40-60 miles and time it around river crossings. McKnight said it rains in the Cascades a lot, so his feet were always wet.

His wife Sarah was at most aid stations and of course at the finish line. Her support, along with others, helped lift his spirits when he may have been dragging. He remembers dealing with an IT band issue two years ago and thought about quitting, but after checking his phone and seeing all the encouraging tests and posts on social media, went back to work.

“During Bigfoot, whenever I had a low spot, I thought of all my friends and family who were cheering me on, and was able to dig deep and keep pushing,” McKnight said. “Support during this is huge. My wife and son (Kilian) are my biggest strength when it comes to this. I want my son to be able to look up to me whenever he struggles and know that he has a dad that has been through and pushed through hard times. At the actual race, my wife is the biggest reason I don’t quit. Whenever I’m in between aid stations and am really struggling, I think of her at the next aid station and push through the pain just so I can get there and hug her. If I’m struggling at the aid station, she does really well with talking me through the pain and getting me out on the trails.”

So, with such a big lead, how does he approach the next race?

“You really need to focus on recovering and keeping your head in the right place,” McKnight said. “These races require a strong mental attitude, and if you complain for a full month leading up to the race that you’re sore, you won’t do good. You need to rest and recover, but convince yourself that the next race is actually your first race.”