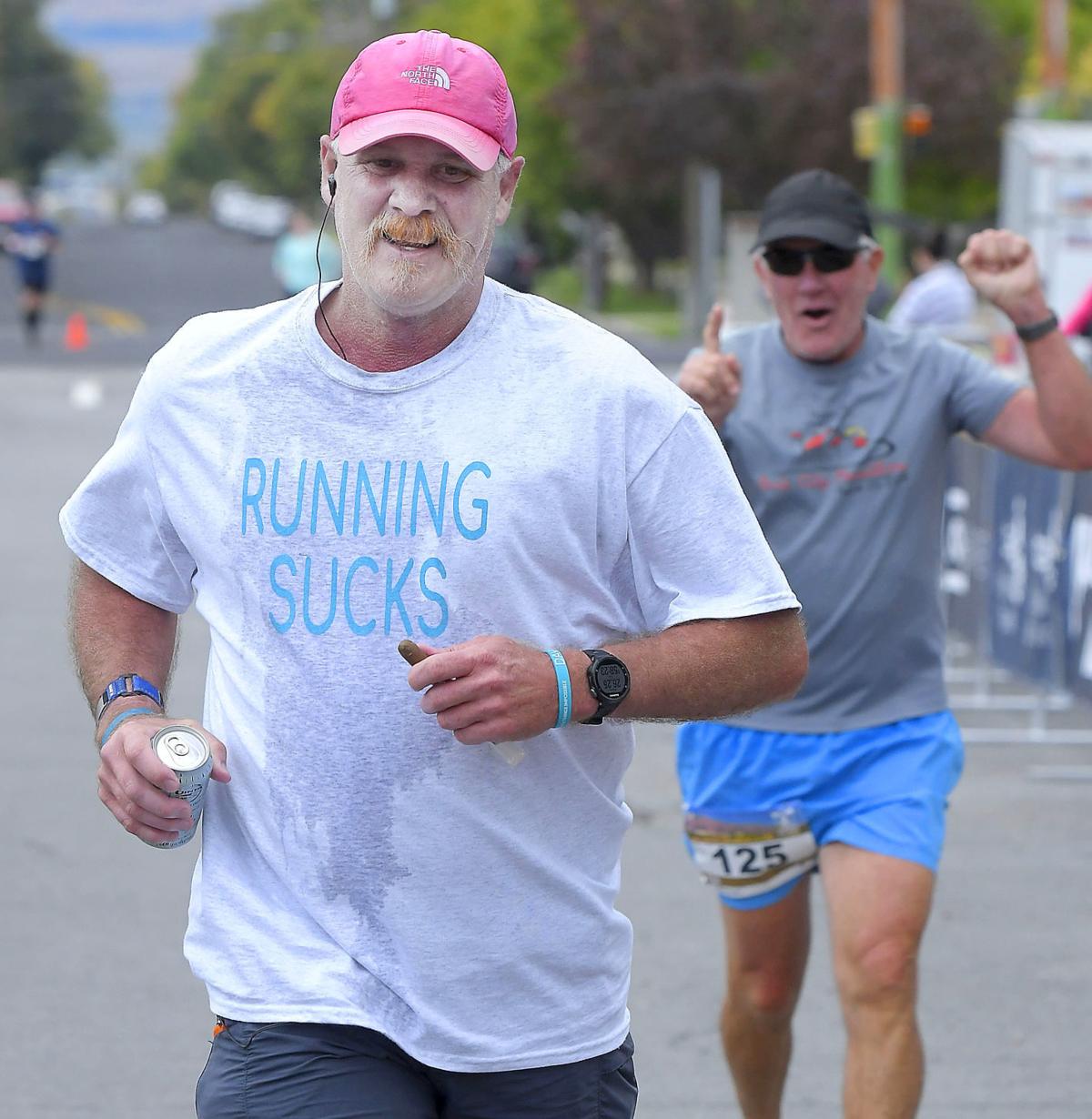 Dave Isom crosses the finish line at the Logan Marathon on Saturday. This was his 100th marathon. 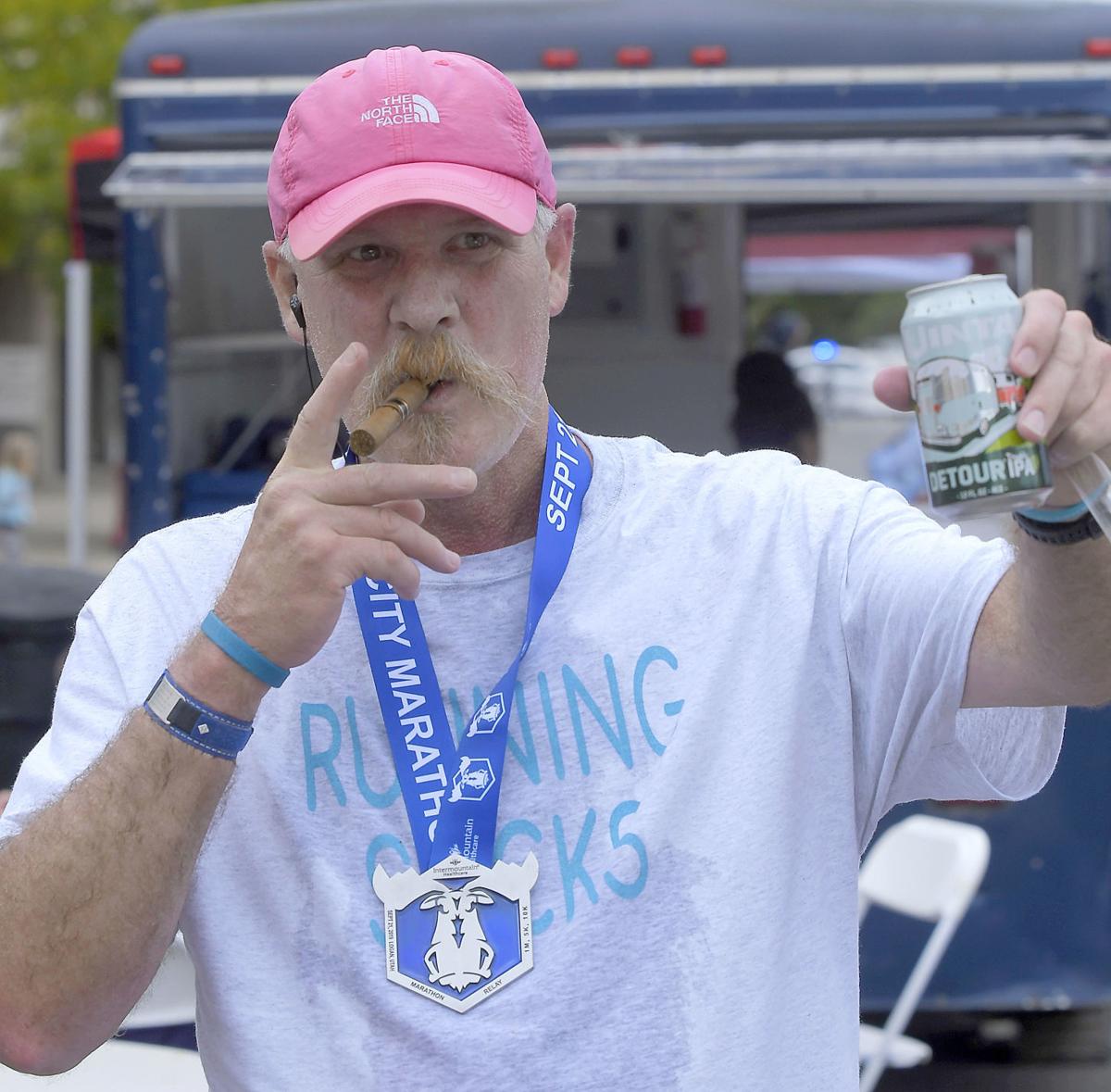 Dave Isom celebrates after running the Logan Marathon on Saturday.

Dave Isom crosses the finish line at the Logan Marathon on Saturday. This was his 100th marathon.

Dave Isom celebrates after running the Logan Marathon on Saturday.

Turning a corner onto 100 North in Logan, the finish line of the Logan Marathon comes into view for Dave Isom.

During his approach, Isom begins to spot friends, colleagues and supporters. They’ve lined up at the finish line to watch him complete the achievement of a lifetime, for Isom at least.

With that final turn, Isom was two blocks away from finishing his 100th marathon and completing a journey across 15 years and 2,620 miles.

According to Greek history, the first man to run a marathon, Pheidippides, dropped dead moments after he finished running the 26.2-mile distance between Marathon and Athens. Presently, Isom, 54, empathizes with Pheidippides a little too much, even though his marathon counter was about to be at triple digits.

With a final, steady plodding gait, Isom crossed the finish line with loud cheers from the remaining crowd.

Isom didn’t come in first, not by a long shot. He wasn’t even close in his age group. Of 202 finishers, Isom placed 183 with a grand time of 5 hours, 57 minutes and 56 seconds. As one teaching colleague, Jen Swenson put it: “He’s not about speed.”

Isom, who is an English teacher at Logan High School, certainly doesn’t care about his speed, or lack thereof. Finishing first isn’t why he runs. It’s more about finishing in general. And on that day, finishing his 100th marathon was the only goal he had to hit.

Since May, Isom had in his mind the goal of running his 100th marathon by the end of 2019. With his mind set to that end, he mapped out his summer to where he ran a marathon essentially every weekend so that by the time the Logan Marathon came around, he’d be at 99, ready to run 100.

The result ended up being 15 marathons in a span of just a few months. Most runners will do five or six at most in a year. Isom now regrets to some degree pushing his body that hard.

“I wish I would have done seven this year and seven next year,” he said.

One of the reasons for the huge push, however, came from getting pulmonary embolism, an affliction that forced him to sit out running for a significant period of time. The memory of having to sit out and put a pause on his marathon counter set off an internal time in Isom’s head.

“When I got pulmonary embolism I got thinking, if I push this back until next summer, what if something happens this winter to me, I break my leg or something,” Isom said. “If I go to my grave with 97 marathons, I will hate life. So I wanted to be sure and be done.”

Late in the summer, however, a major obstacle threatened the prospect of Isom achieving his goal in September. Painful rashes started to cover his body. The diagnosis was shingles, another nasty affliction that has kept some in bed for weeks.

Swenson said she “begged” Isom to “put off the 100 for one week or miss a race,” have the 100-marathon celebration at the Logan Marathon and then do a makeup run later to truly fulfill the requirement. But Isom wouldn’t have it. He would finish and would do it on his terms.

Finishing has always been a major motivator for Isom in these races. It’s something he remembers well from his very first marathon in a now-defunct race in Moab.

“I remember I was pretty elated,” Isom said of marathon number one. “That was cool.”

That feeling, following his first marathon got him through several of the next. Isom said for most of his first 10 or so marathons when he rounded mile 18 with the thought in his mind “I don’t think I want to do these anymore.” But by the time he crossed the finish line, those thoughts were gone, replaced soon after by plans for the next run.

“I just like to finish,” he said. “I like the experience, so I guess that’s why I keep doing it.”

One of Isom’s former teaching colleagues, Bill Emmett, was one of the key figures in getting the then 39-year old Isom into running. One of the questions he had was whether or not he could finish. Upon finding he could, Isom looked for more challenges.

“He was always looking for something to keep testing him and I think that’s why he got involved in the 100 marathon (goal),” said Emmett, who crossed the finish line right behind Isom last Saturday. “It was something to move towards.”

More marathons lie in the future for Isom. Despite the pain, time, money and sometimes dread the races bring to him, Isom insists the races are “not that hard” to finish.

“I’m not going to quit just because I’m tired,” he said.

That mentality took him from zero marathons to one, from one to two and all the way to 100. And not too long from now, number 101 will be next.