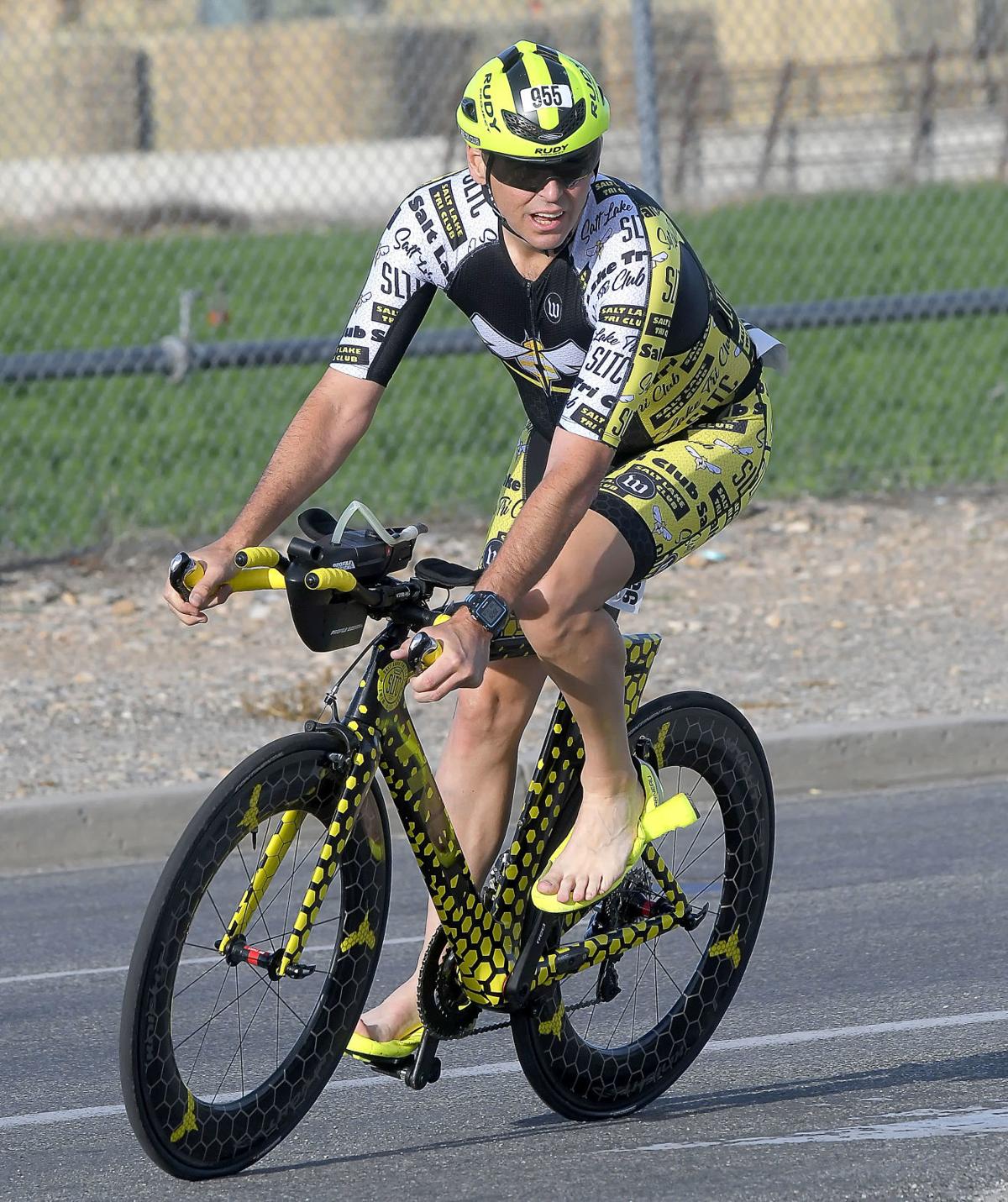 Thomas Risse rides his bike during the Cache Valley Super Sprint Triathlon on Saturday in Hyrum. To view more photo from the event, go to hjnews.com. 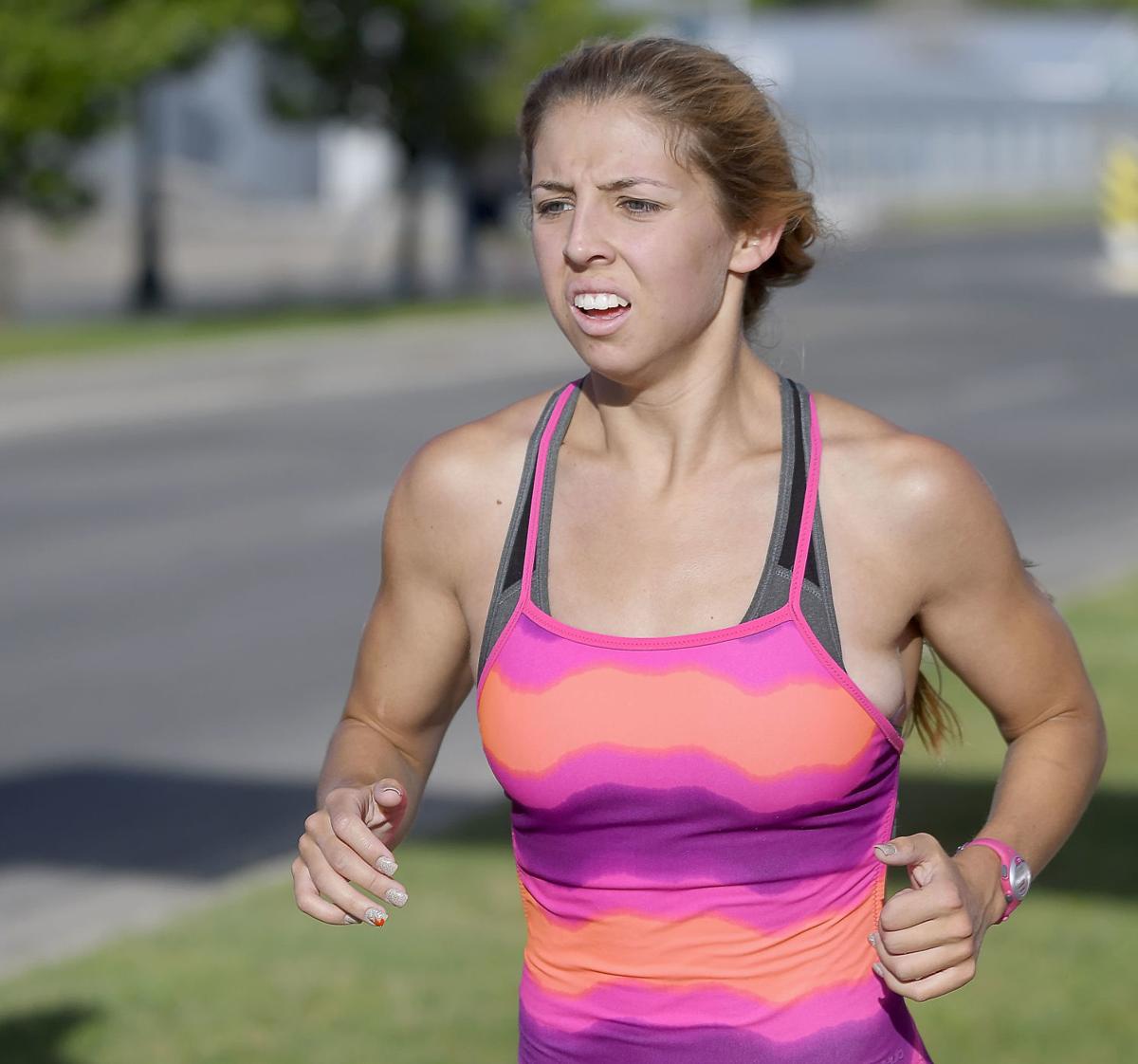 Emily Mortensen nears the finish line while competing in the Cache Valley Super Sprint Triathlon on Saturday in Hyrum.

Thomas Risse rides his bike during the Cache Valley Super Sprint Triathlon on Saturday in Hyrum. To view more photo from the event, go to hjnews.com.

Emily Mortensen nears the finish line while competing in the Cache Valley Super Sprint Triathlon on Saturday in Hyrum.

It took Emily Mortensen seven years to cross competing in a triathlon off her bucket list, but she has certainly made up for lost time.

The Utah State University student not only developed an affinity for the sport, but quickly discovered it was something she was proficient in. For the third straight year, Mortensen finished in the top two in the women’s competition at the annual Cache Valley Super Sprint Triathlon (CVSST), which started and concluded last Saturday at Mountain Crest’s Stang Aquatic Center.

Mortensen, the 2018 and 2019 champion, was the runner-up in the women’s field at the 16th installment of the race, and she also posted the fastest time among all Cache Valley residents — female or male.

“I had wanted to do a triathlon for a long time,” said Mortensen, a soon-to-be senior who is majoring in nutrition science and minoring in chemistry. “I signed up for one in I think 2010, but I had to miss it for something and ever since then I was like, ‘Oh, I just want to do one, I think I might be good at it, I might like it.’ So right after my freshman year of college, in 2017, I saw an advertisement on the side of road for the Cache Valley tri and I was like, ‘Oh, perfect, this is my opportunity.’ And so I signed up and borrowed my cousin’s mountain bike because I was just a broke college kid from out of state who didn’t have her bike.

Mortensen and all of the other athletes got to showcase their skills on a different course, inasmuch as the normal venue — the Logan Aquatic Center — is closed for the summer due to COVID-19. This year’s course featured a 480-yard serpentine swim, followed by 12.5 miles on the bike and a 5-kilometer run. The CVSST generally offers a double sprint race — meaning the racers complete the sprint course twice — but that wasn’t an option in 2020.

Mortensen, who is from Virginia, raved about the course, especially the bike portion of the race, which took competitors along the back roads to Hyrum Reservioir and then Paradise. The run looped through the neighborhoods surrounding Mountain Crest and gave the athletes a nice view of Blacksmith Fork Canyon.

“Usually at the Logan Aquatic Center, we (bike out) to the Mendon area and it’s really flat the entire time,” Mortensen said. “And while I enjoy the flat course that’s traditionally used, I really enjoyed the little hills and the nice turns that this course had, as well as the great view of Hyrum Reservoir.”

The 23-year-old covered the course in 1 hour, 7 minutes, 10 seconds, which was only 17 seconds slower than female champion Karolina Mole. Mortensen was the most consistent athlete in the women’s field as she placed in the top six in all three disciplines, but Mole blew everyone away on the bike. The 36-year-old West Jordan resident completed the cycling portion of the race in 33:49, which was nearly two minutes faster than anyone else on the women’s side.

Mole recorded the 16th-fastest overall time, while Mortensen occupied the No. 17 position. The athlete with the next fastest time was Wellsville’s Ryan Piggott, who was the top local male placer. The CVSST veteran clocked in at 1:07:15.

Piggott finished fifth in the men’s sprint competition last year and sixth two years ago, but this was the best men’s field in recent memory. Multi-time CVSST champion Nathan Pollard was fifth this time around as several strong triathletes from the Salt Lake City and Ogden area, and even outside of Utah, made the trek to Cache Valley. The coronavirus has led to the cancellation of many triathlons throughout the Beehive State this summer.

The former Mountain Crest baseball player was just grateful to have a race to prepare for. Piggott was training to participate in a Spartan race, but that has been pushed back. It was initially scheduled for this week.

“It’s the lifestyle of being active,” said Piggott when asked what about the sport of triathlon keeps him coming back for more. “I try and stay pretty active. I do some kind of training every day besides the normal weekend Sunday stuff, but it’s someone you can do your whole life and I’m learning the more I’m in shape, the better I feel. That’s what sort of keeps bringing me out and these races sort motivate me to have a goal to keep pushing myself. ... And so I try and do two or three of these triathlons, these other (endurance) events every summer.”

Piggott first started competing in triathlons about 10 years ago. The 35-year-old who lives in Wellsville was inspired to try his hand at the sport when he witnessed a triathlon in Coeur d’Alene, Idaho, while visiting with his wife’s family. Piggott has completed a full ironman and half ironman triathlon, plus a bunch of races at the Olympic distance. A full ironman course consists of a 2.4-mile swim, 112-mile bike and 26.2-mile run.

Like Mortensen, Piggott was pretty pleased with his performance last weekend.

“The bike is by far my strongest discipline that I just love getting out and putting time into,” said Piggott, who like Mortensen praised the efforts of CVSST race director Joe Hill. “I can usually do OK (on the bike), but for the run actually, I was pretty happy with my run. I had, for me, a decent time in the run, and that’s something I’ve worked on over the years and especially this past winter ... and I felt like I improved a little bit there on Saturday. The pool swim, I always feel like it’s going to be easy, but it’s a little bit different being in the pool with other people coming behind you and just trying to figure out that time when to (pass people). I always go out a little too hard in the water, it seems like, and have to recover from that.”

The third-highest local placer was Logan’s Dan Line, who was 21st overall. The 53-year-old cross country and track & field coach covered the course in 1:08:00. Line competed in arguably the toughest division as four of the top 11 overall placers were in the 50-54 category.

Rounding out the top five in the women’s competition were Salt Lake City’s Rette Green (1:08:43), soon-to-be Ridgeline High senior Hailey Rigby (1:09:25) and Lehi’s Robyn Shelton (1:10.51). Rigby is a standout swimmer for the Riverhawks — she was the 4A state runner-up in the 200-yard IM and a state champion in the 200 freestyle relay — and a good cross country runner.

In the men’s competition, Providence’s Bo Labrum was the third local finisher with his time of 1:08:02, which was good enough for the No. 20 position. The former Mountain Crest all-state wrestler was followed by current Mustang all-state swimmer Zachary Roundy (22nd, 1:09:54) and Providence’s Taylor Mendenhall (26th, 1:11:32).

There were 164 total athletes who completed the entire course.