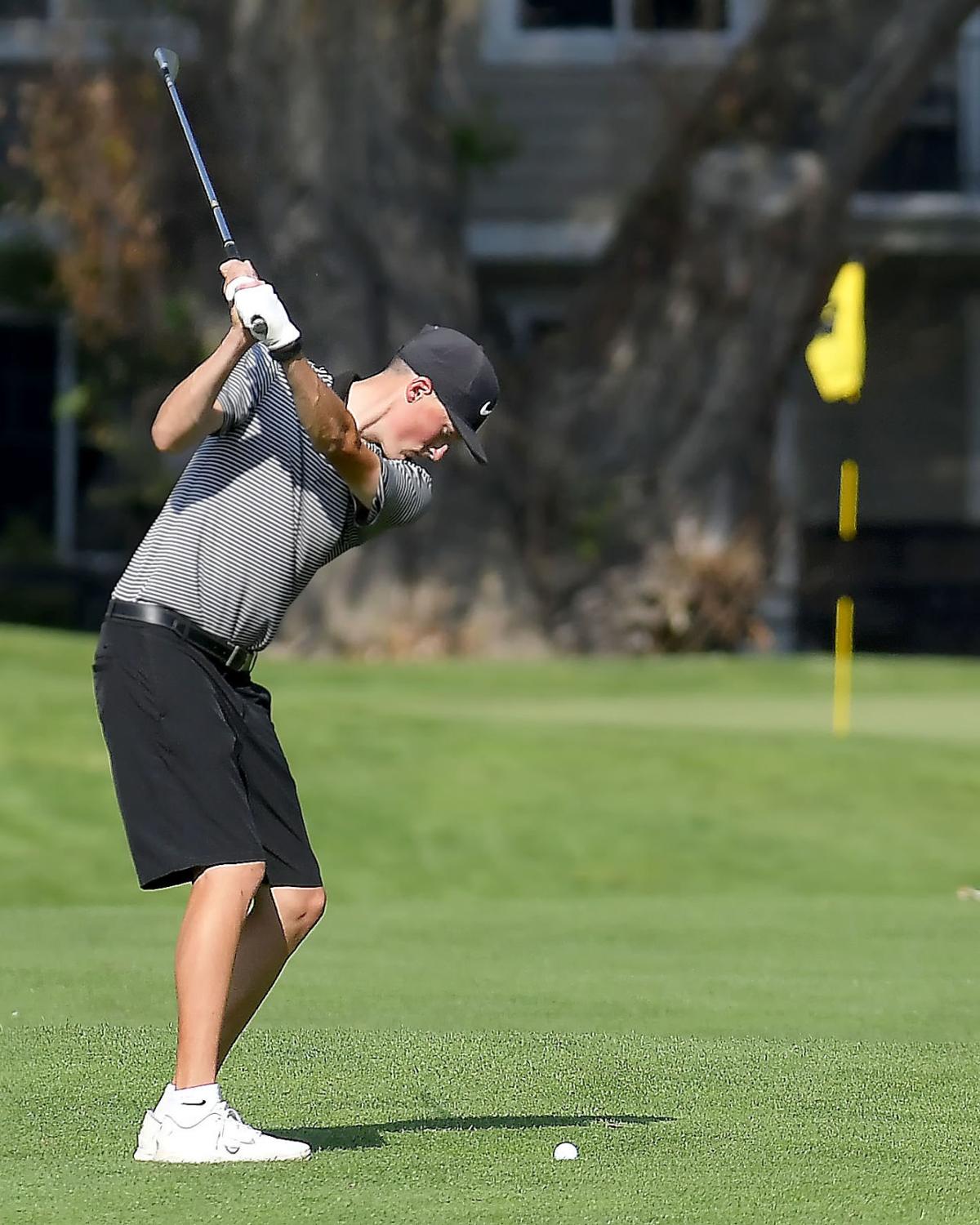 Andy Hess hits his approach shot on the 11th hole at the Logan River Golf Course on Wednesday. 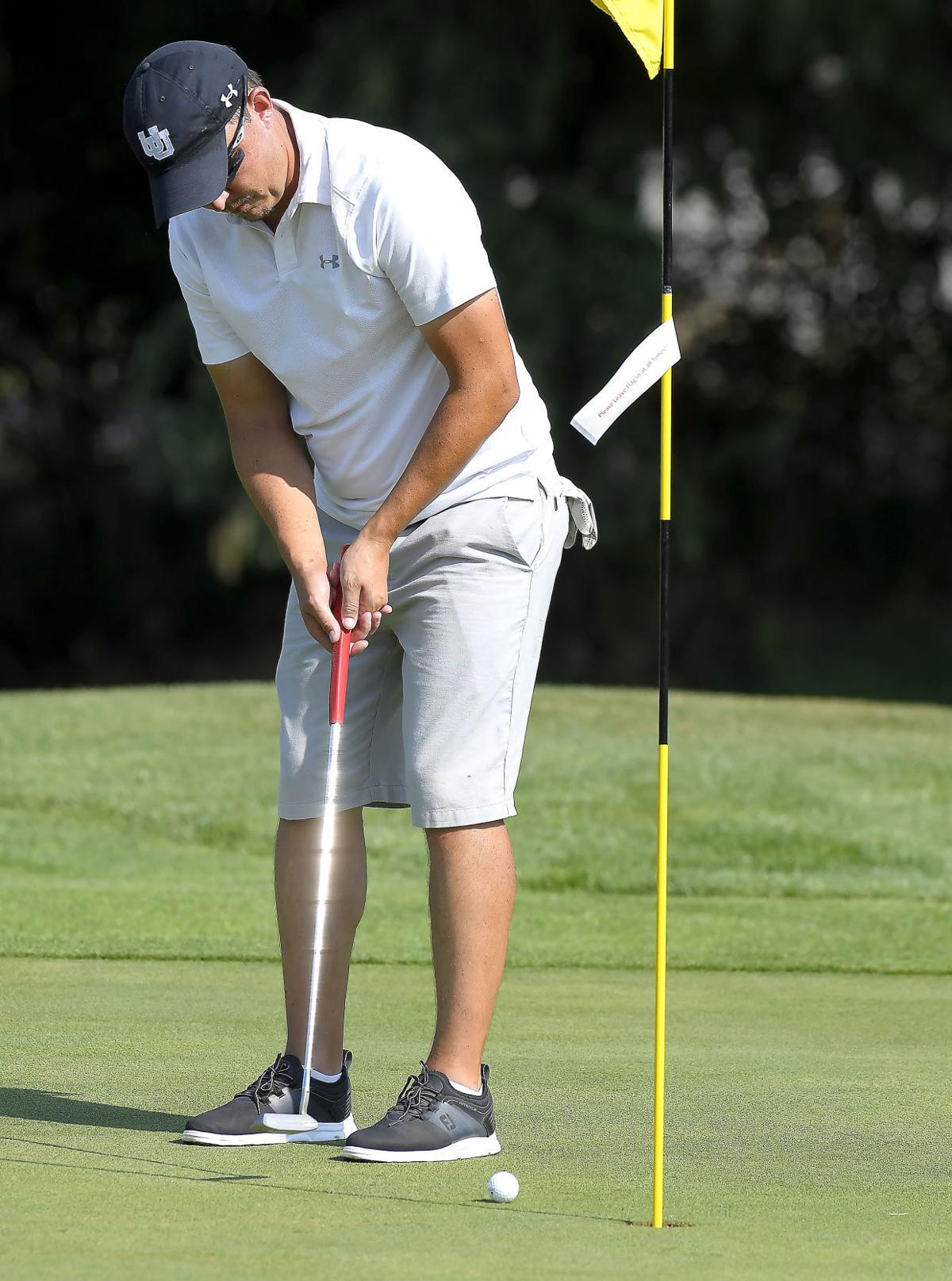 Nick Summers putts the ball on the seventh hole at the Logan River Golf Course on Wednesday.

Andy Hess hits his approach shot on the 11th hole at the Logan River Golf Course on Wednesday.

Nick Summers putts the ball on the seventh hole at the Logan River Golf Course on Wednesday.

Some bad luck for one golfer and a good decision by another ended up being the difference Wednesday evening as the sun scorched everyone in the gallery at the Logan River Golf Course.

Veteran Nick Summers squared off against Utah State University golfer Andy Hess for the men’s club championship. It was an epic battle as it took all 18 holes to decide a winner in the match-play format.

In the end, Hess was able to pick up his eighth birdie on the par-5 18th hole, while Summers had to settle for a par.

“I’m tired, that was a battle,” Hess said. “I knew I couldn’t get down with myself if I hit a bad one. I didn’t want him (Summers) to see me getting frustrated with myself, because then he would take advantage. I tried to stay even keel all the way. I just tried to stay aggressive.”

The last few weeks have been epic for the Aggie senior-to-be. Hess hadn’t won a tournament in nearly six years, but won the Cache Valley Amateur. Now he is the Logan River champ and won the title against an icon at the course.

“I hit a lot of good shots and putts to stay in the match and keep the momentum going,” Hess said. “It was honestly one of the most fun matches I’ve ever played in. You want your opponent to play their best, because it brings the best out of you. I was very happy with how I played today and stayed composed.”

Summers was going for his ninth Logan River title. The defending champ won his first title in 2002. Only Ilene Davies has won more club titles at Logan River as she has nine on the ladies side.

The 38-year-old Hess, who resides in Avon, knows about close matches as he and Nate Nyman went 21 holes last year before the eight-time champ won it. He is always in the mix at the River and it seems against young guys.

“Andy deserves it,” Summers said. “He is as good a player as we’ve had down here since I can remember. He doesn’t have any holes in his game. I have a lot of respect for him.”

Hess never trailed, but was in a dogfight the whole round. The 22-year-old from Idaho Falls, Idaho, pointed out he would have carded a 7-under-par 64 and only won by one stroke.

“We both only made one bogey,” Hess said. “We had a lot of birdies, and it came down to the last hole.”

“That is as good a golf as you will probably see down here,” Summers said. “I just hung in there and kept playing my game and made a few putts when I needed to which kept me in the game until the last (hole).”

After Summers made a 20-foot birdie putt on No. 14 to win the hole and square the match, neither golfer wanted to flinch down the stretch. Both made clutch shots and putts to halve 15, 16 and 17.

Both hit good drives on 18. Summers had the misfortune of catching part of a tree branch on his second shot, leaving him well short of the green, while Hess went for it with a 5-iron and reached the putting surface. Summers again had some bad luck as his approach shot hit near the pin, but spun back about 15 feet leaving him with a long putt for birdie.

“Going into 18, I knew I had to birdie it with how much further he hits it than I do,” Summers said. “I had to assume he would be on the green in two with his length, so I hit driver and hit a great second shot, but just nipped the tree by an inch. Golf is a game of inches, and it cost me today. I hit a great third shot and it sucked back. What do you do?”

Hess just wanted to get the ball up close on a 25-foot putt for what could have been an eagle. He did just that, and Summers conceded the birdie. Summers left his 20-foot putt short, ending the match.

“What happened with Nick’s ball on 18 is a bummer,” Hess said. “You never want to see that happen, especially the third shot. ... I was not trying to make that 25-foot putt and left it short for a reason. I didn’t want a come backer. It would have been nice to make eagle, but all I needed was a birdie.”

Early in the match, Hess got up two holes through five. Summers won the next two holes to square it. That was the kind of match it was throughout.

“He (Summers) made a lot of putts today,” Hess said. “He ran one in on six from off the green, hit a great approach shot on seven. ... Hats off to him. I couldn’t have had more fun grinding with him. It was an unbelievable match.”

The two have not played a full round together before Wednesday.

“I knew he (Summers) was a great player,” Hess said. “His name is on that plaque in there (clubhouse) eight times for the club championship. I knew I had to come out and stay aggressive and confident.”

Hess may just start liking this winning feeling. Next up is a trip to the Utah State Amateur in early September.

“It’s nice to be able to keep playing with the (college) season being canceled,” Hess said. “I’m very happy with where my game is at right now.”