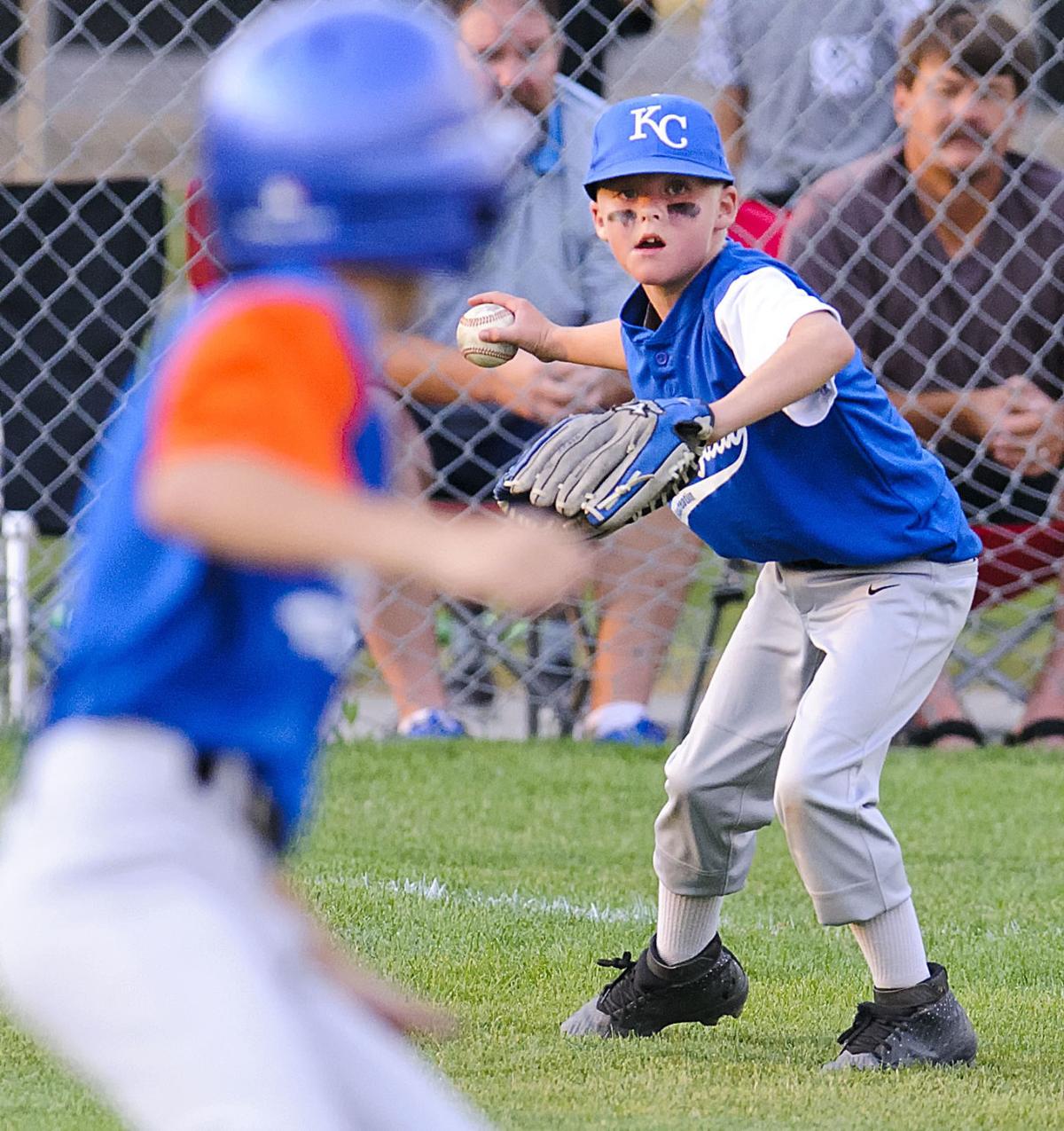 Smithfield Royals’ Jayden Johnson looks to throw the ball as the Mets’ Ty Phillips rounds first base on Wednesday in Smithfield. 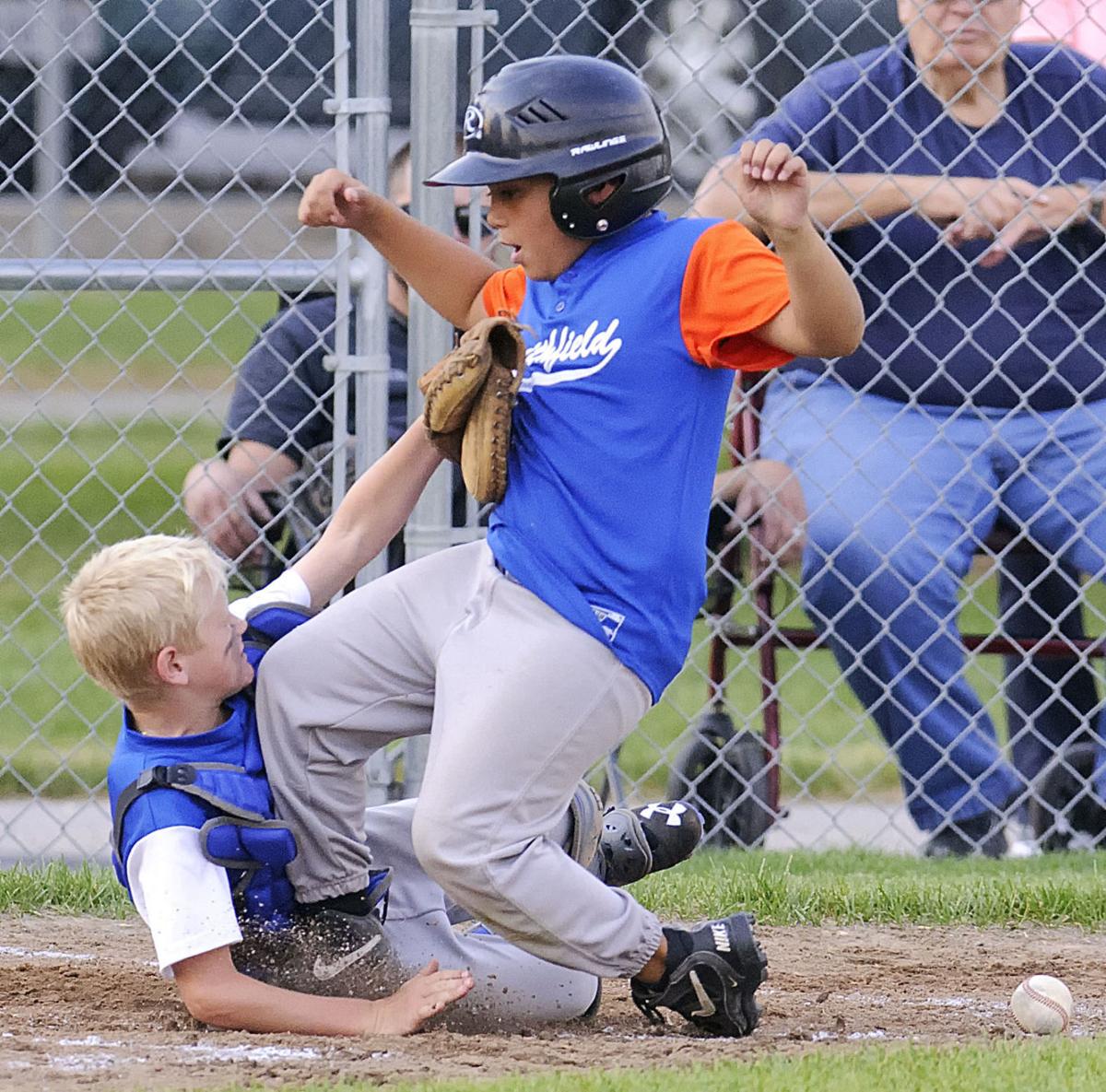 Smithfield Royals’ Jayden Johnson looks to throw the ball as the Mets’ Ty Phillips rounds first base on Wednesday in Smithfield.

SMITHFIELD — A four-run third inning clinched a youth baseball championship for the Smithfield Royals as they defeated the Smithfield Mets, 10-9, on Wednesday in Smithfield.

The victory came as a culmination of season of triumphs for the Royals.

“We did really well this season. We battled and I just feel like we did a really good job,” said Royals catcher Tucker Stokes following his team’s championship performance.

The Royals held a narrow 3-1 lead entering the third, but Jayden Johnson and Stokes each scored to extend the lead to 5-1. And the Royals went on to add two more runs, to leave the inning with a 7-1 advantage heading into the bottom half of the inning.

Despite being down, the Mets did not pack it in and came out swinging. Leland Palmer first cut into the deficit by driving in Lincoln Ballard with an RBI single. Palmer and Ollie Collins would both go on to cross home plate to pare the deficit to 7-4, as the teams went into the final frame.

The Royals added three more runs in the final inning, led by a Stokes two-RBI double.

The Mets faced a tall order as they trailed, 10-4.

Davis Crossley began the comeback with an RBI single. Jenna Larsen added a well-placed RBI single down the first base line and her brother Kaleb followed with a double to left field.

The Mets tacked on five runs, but the comeback was cut short due to a five-run limit per inning rule, and the Royals captured the championship in the 10- and 11-year-old division.

Stokes led the Royals batters by reaching base three times, driving in two runs and scoring two more. Bair went 1 for 1 with three RBIs and a run. Will Krambule was also 1 for 1 with a pair of RBIs.

Bronx Aguirre started the game for the Royals on the mound and pitched two innings, and struck out four batters. Johnson and Stetson Summers each pitched an inning in relief in the game.

However, Stokes pointed out, the victory was a result of a complete effort for the Royals.

“We hit the ball pretty well, we fielded the ball really well and we got the ball in quickly,” Stokes said.

At the plate for the Mets, Collins reached base in all three of his at-bats, by way of a walk, a double and a hit by pitch, and he scored two runs in the game.

Ty Phillips led the Mets’ batters with a 2 for 3 outing, with an RBI. The Larsen siblings combined to go 3 for 4 with an RBI and two runs.

“I was just taking my time, looking at the catcher’s mitt and concentrating,” Collins said was his focus on the mound.

Following the game, Collins emphasized his team’s effort, including the late-game rally, and was optimistic regarding future opportunities.

“I think we played well and maybe we can do it next year,” Collins said.