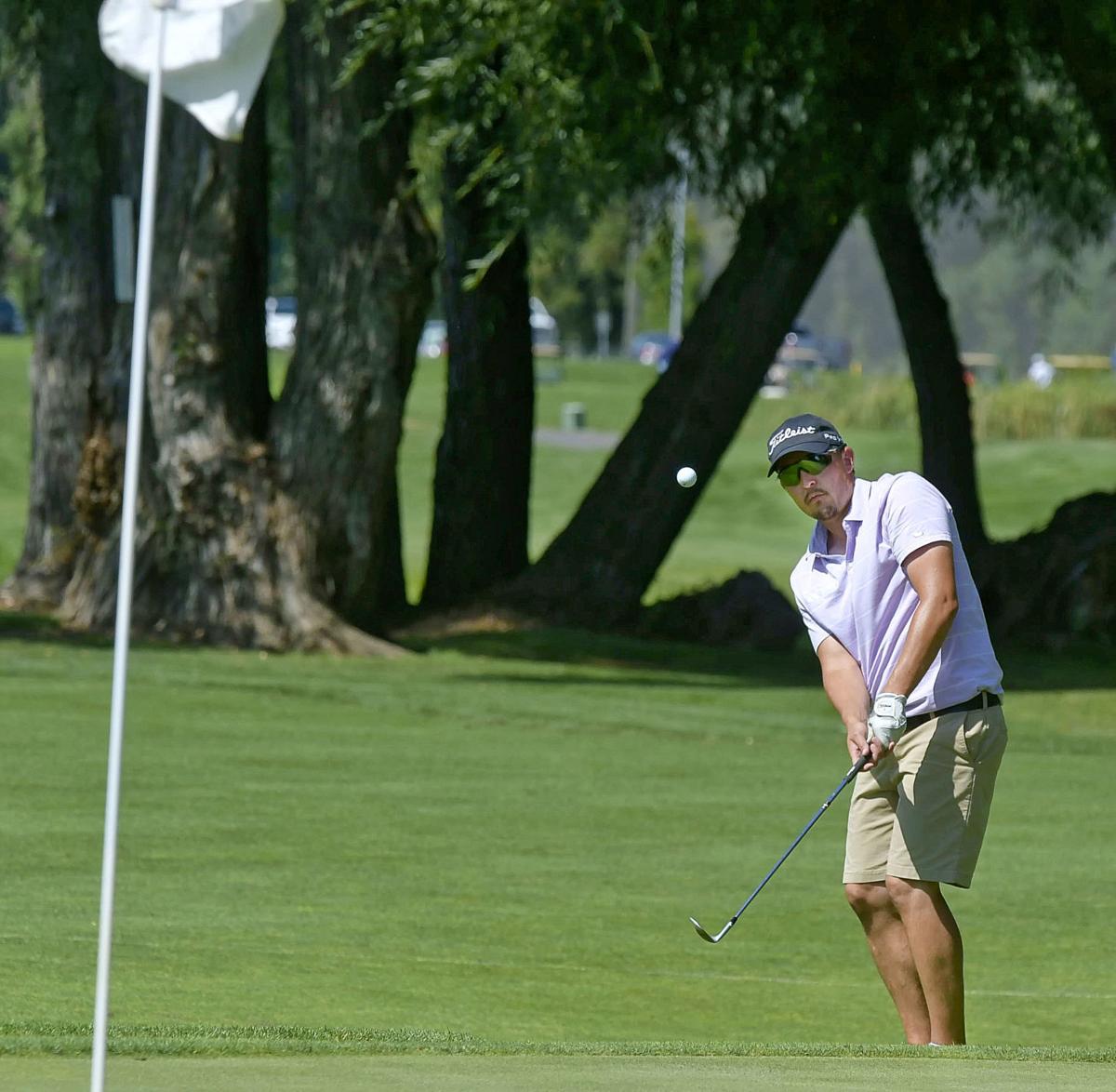 Nick Summers chips the ball on the first green at Logan River Golf Course on Wednesday. 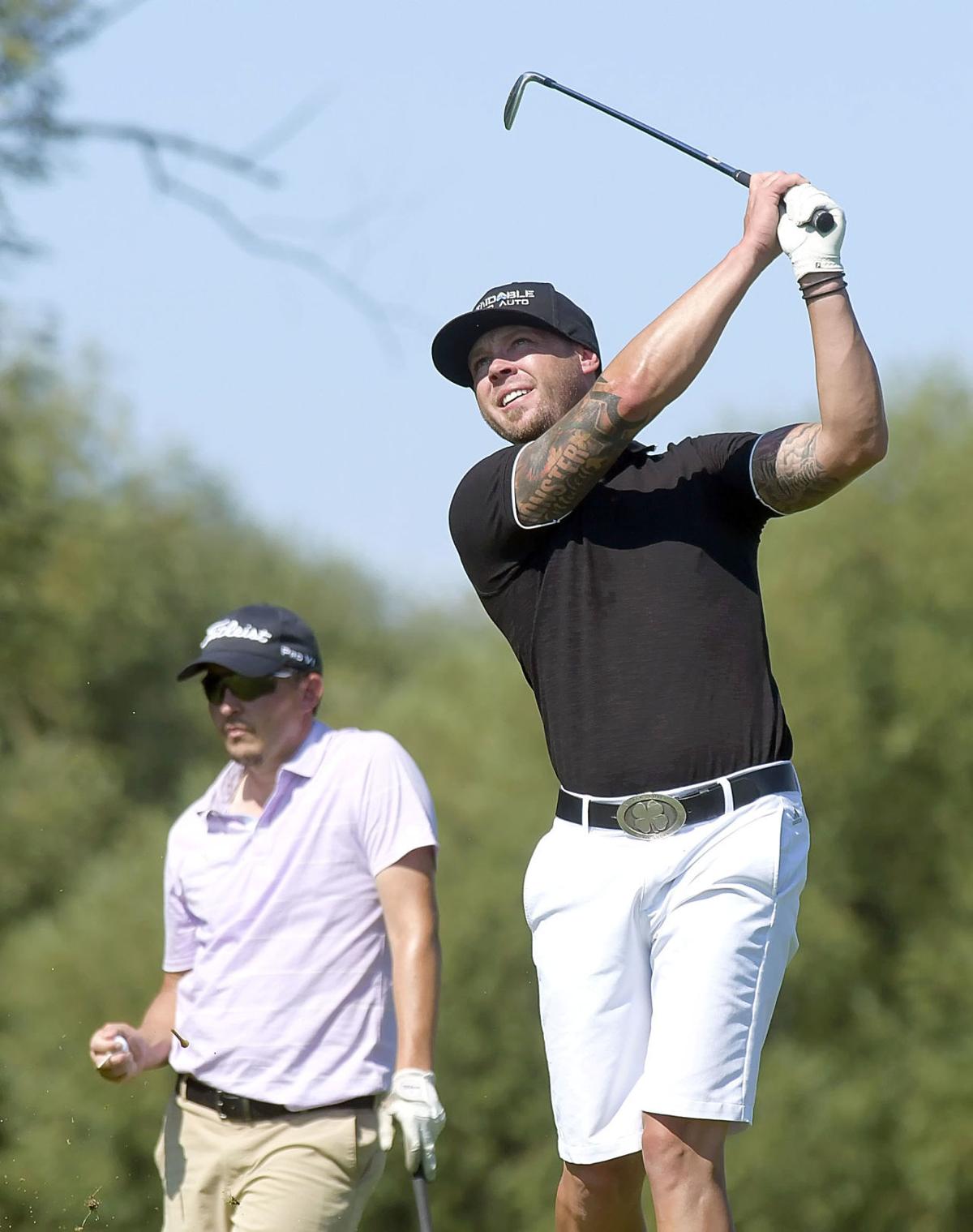 Nick Summers chips the ball on the first green at Logan River Golf Course on Wednesday.

Eighteen holes were not enough to decided the Logan River Men’s Club Championship.

In fact, it took 21 to crown the 2019 winner Wednesday evening as two familiar faces squared off. Nick Summers never trailed in the match, but had to hold on for dear life down the stretch.

That’s because defending champion Nate Nyman got hot to force extra holes. In the end, a lost ball and some solid putting brought the match to an end at 21 holes. Summers captured his eighth title at the Logan River Golf Course.

“That was exhausting,” Summers said. “It was fun. I enjoy coming out and competing with everyone. It’s one of the highlights of the year.”

“This is definitely the best,” Summers said. “I’ve never played a championship into extra holes. This was pretty exciting.”

Nyman, who has had a summer to remember around Cache Valley, especially the last few weeks, was trying to move up into second for most titles at Logan River in the champ flight. However, he will remain tied with Jim Whitteker — who won the first back in 1993 — Kevin Blotter, Nate Blotter, Charlie Parson and Toph Peterson with two championships each.

Summers, who now calls Avon home with his wife, two kids and soon-to-be third child, only had two bogeys in 21 holes of golf.

“I played fantastic today,” Summers said. “I only had a couple of bad swings. What more can I ask for? ... The key down here is keeping the ball in play, especially for me and my game. If I can keep the ball in play, hit greens and let my putter do its work, I’m usually pretty successful down here.”

Summers and Nyman have played each other in four championships now at Logan River.

“I’ve been fortunate that the breaks have gone my way,” Summers said.

Nyman didn’t go down without a fight. It was looking dire for the valley native who currently lives in Brigham City. The 33-year-old golfer was down three holes heading to No. 15. He dropped a 15-foot birdie putt to stay alive and create a bit of a buzz.

“I knew I’ve been hitting it good the last few months and knew I had to stay aggressive,” Nyman said. “The front nine, I didn’t leave myself any good chances. I didn’t feel good with the putter until the back nine.”

Both just missed birdie putts within 10 feet on No. 16 to halve the hole. They headed to the par-3 17th, a hole where Nyman has lost to Summers before.

“I was trying to go for eagle on 16 and then wish I would have made birdie there,” Nyman said. “It was good to keep forcing it and putting some pressure on him. It was good to get into extra holes.”

Both missed the green on 17, but Nyman was able to get out of the right sand trap and drain a 7-foot putt for par. Summers just missed a 25-foot putt to win the match and saw his lead shrink to one hole with one to play.

“I had a chance on 17 to close it out, but I slipped on my tee shot,” Summers said. “I gave Nate that hole. The last thing you want to do at the end is give a guy a hole, and that’s what I did on 17 and all of the sudden the momentum swings to him.”

Knowing he had to go for it on the par-5 18th to keep playing, Nyman reached the edge of the green in two. He sank a 18-foot eagle putt to even the match.

“Give Nate credit; he’s a heck of a player,” Summers said. “Even when I had him down towards the end he continued to grind, made some birdies and eagled 18.”

“I just rolled in a few putts and kept grinding,” Nyman said. “... I just stayed aggressive. I did not change my game plan and tried to play like I have all year.”

They headed back to the par-5 first hole. Summers had won the hole to begin the match with a birdie putt from eight feet. Was he thinking about that?

“I was just trying to keep doing what I do, one shot at a time,” Summers said. “That’s always my focus — try and not get ahead of yourself, hit the shot that is called for. It’s easier said than done. That’s golf.

“I knew I had to get off to a good start with Nate. He has probably played better than anybody in the valley this year.”

They both birdied No. 1 the second time around. They both hit nice chip shots close to the pin on their third shots.

Summers lipped out a makeable putt on No. 2 as they both settled for par and headed to hole 21.

“I putted great today,” Summers said. “Towards the end when Nate made his comeback, I lipped out a couple. That’s golf and you just roll with the punches.”

Like he had for most of the day, Summers drive was in the middle of the fairway. Nyman had a nice drive as well and was a little closer to the green. After Summers reached the green, Nyman had his approach shot sail over the green and into some bushes.

“I can’t believe how far it flew on that last hole,” Nyman said. “I hit the right club. I had some adrenaline going, but ... it sucks. I’m happy for Nick. He is a heck of a player. I love playing against him.”

The ball was never found and he had to drop. Nyman’s chip was close, but the bogey was not good enough as Summers was able to par the hole and win the match.

Nyman had to shake his head and wonder what could have been. He shot a 67 and made two eagles, but still did not win the match. Trailing by two, Nyman looked to be in trouble on No. 6, but chipped in for an eagle.

“It’s not to often you see two eagles in a round down here,” Summers said. “... I’ve known Nate for a long time and we’ve had a lot of battles down here. Over the years watching his game go from what it was to what it is today is pretty impressive. He is a heck of a player.”

In other flights, Nic Bailey beat Doug Sayama for the A Flight title. Afu Latu defeated Lance Nielsen for the B Flight crown. Bill Bauer beat Jim Blotter for the C Flight championship.