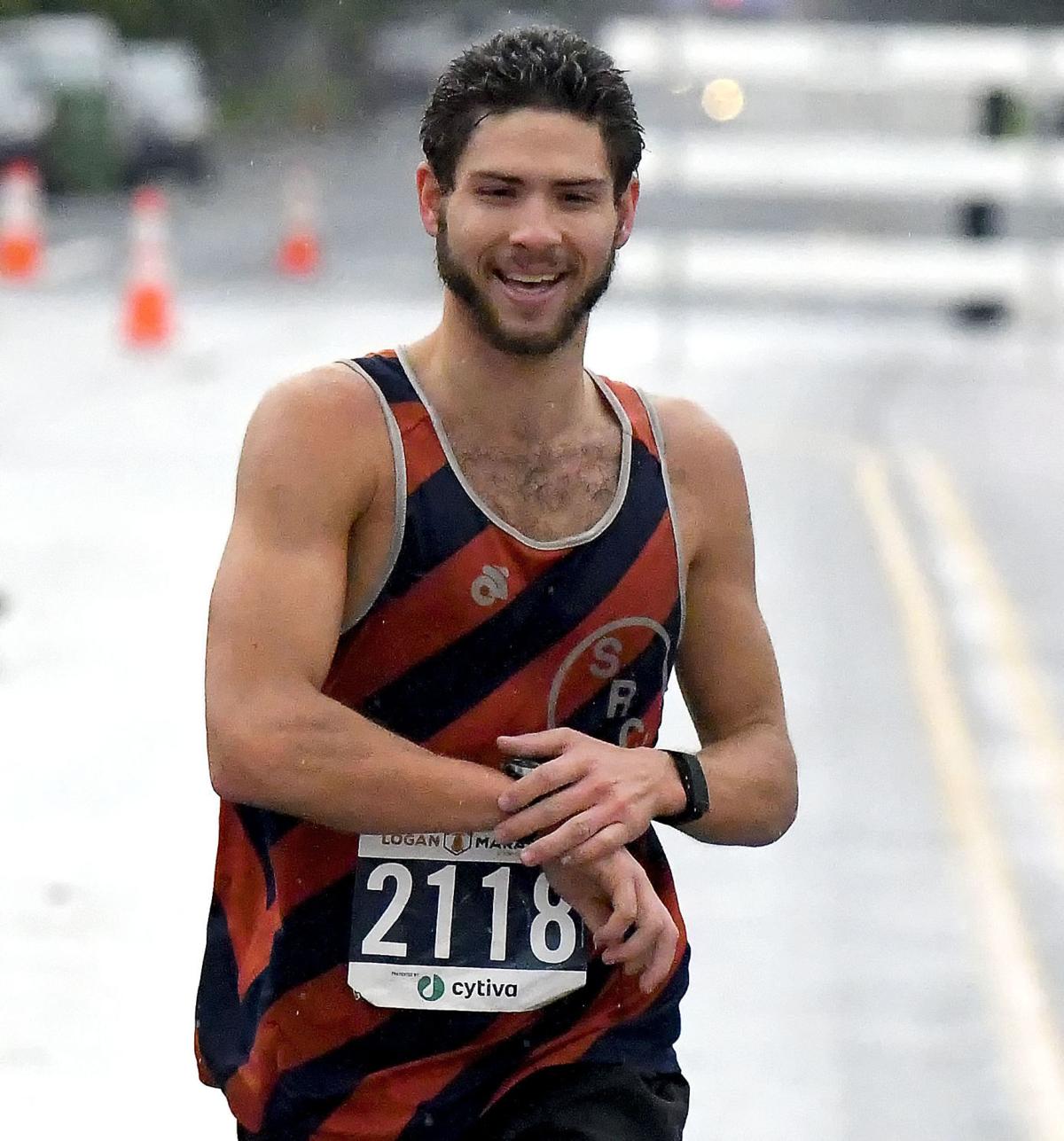 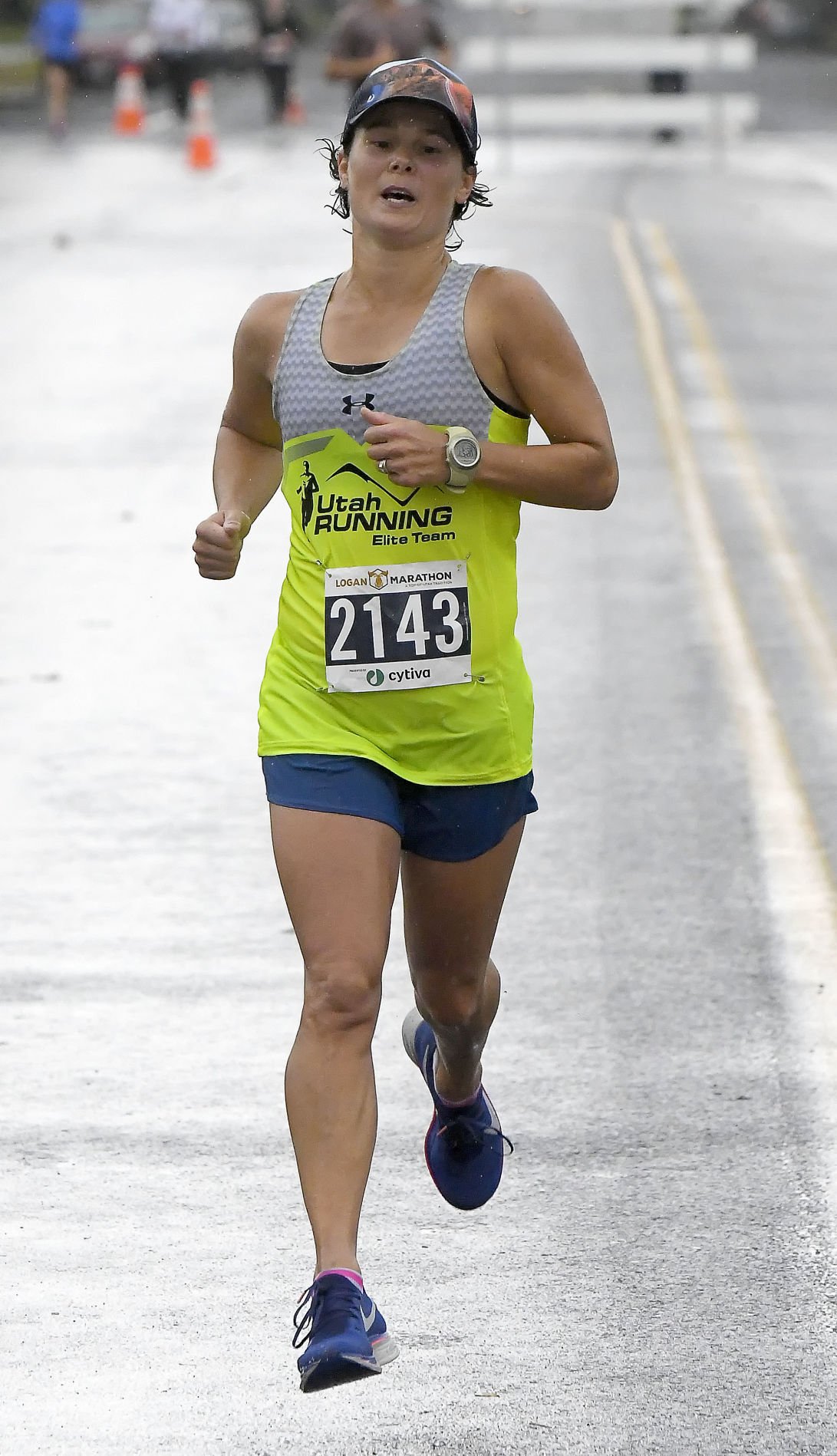 Christina Perry approaches the finish line as the first female runner in the Logan City – Top of Utah Marathon on Saturday.

Christina Perry approaches the finish line as the first female runner in the Logan City – Top of Utah Marathon on Saturday.

A steady rainstorm wasn’t about to put a damper on Louis Tobias’ first-ever marathon in the Beehive State.

You see, the 25-year-old resident of Albuquerque, New Mexico, was just ecstatic to be putting his countless hours of training to good use. All of that preparation certainly paid of as Tobias blew away the competition at the Logan Marathon last Saturday.

“It was fantastic that the race actually happened,” Tobias said. “This is my first time in Utah, so I got to explore a little bit yesterday, and people need something like this. You know, for everybody to be able to come out and still socially distance ... for the runners that trained months and months for this, we appreciate it. We really do.”

Tobias sparkled in just his second ever marathon. The former Bucknell University distance runner completed the 26.2 miles in 2 hours, 31 minutes, 14 seconds — an impression performance considering how flat the course is and how rainy the conditions were.

Tobias, who ran eight minutes faster than he did in his first marathon, beat the silver medalist by 13 minutes.

“It feels really good,” Tobias said. “I’ve trained since last November for this. Originally, I trained for Boston, and then that got canceled, so I just kept on training for this. For my second marathon, I was really happy. I came in looking to run 2:32 and I would have loved to break 2:30, but I was close.”

Unlike Tobias, the women’s champion was not a newcomer to the sport of marathon running. In fact, Christina Perry has been a fixture at Utah-based races for several years. Like Tobias, Perry shined at the second installment of this event.

The former University of Vermont distance runner covered the course in 2:57:33, which was good enough for the ninth-fastest time overall. Perry, a former St. George and Huntsville marathon champion, finished more than four minutes faster than her closest competitor.

“I felt pretty good,” said Perry, who has competed in the Top of Utah Half Marathon a couple of times. “It’s kind of been a stressful few months, just with COVID and the training. I’ve got a couple of kids we’re home schooling, so all in all it’s just kind of been a stressful time trying to keep up on the training and trying to decided whether or not you’re going to race. I was going to do Ogden, Ogden got postponed and then canceled. I was going to do St. George, St. George got canceled. ... I had already been doing my long training runs, so I decided Logan would be a good one because there was no busing (to get to the start line).”

It was a small, but competitive field as 10 of the 168 athletes who finished the race eclipsed the three-hour barrier.

Perry, who is from Vermont but has lived in Utah since 2006, ran together with one guy for a short time, but spent most of her time on the course by herself.

“When you have less than 200 people at a race and you’re kind of out there by yourself, those last eight to 10 miles can get kind of lonely, and you have to kind of self-motivate more,” the 38-year-old said. “It did help that I saw a few people near the end that I passed, so that helped a little bit just to give myself positive affirmations, just telling myself, ‘I am strong, I am fast,’ just trying to get through that last 10K.”

Tobias, who ran at a 5:46-per-mile clip, was able to pace with a couple of fellow competitors for approximately six miles before making his move. The native of Connecticut didn’t expect to win the race. In fact, he said, “at mile five, I told myself, ‘just stick with them and whenever they drop you, they drop you.’”

When did the former collegiate miler finally think this race was his for the taking?

“Never,” Tobias said with a laugh. “I really tried to break (the race) into chunks, so I was just thinking about five-mile chunks. And so I started feeling really good around mile 10, 11. I think I had a couple of those (splits) at 5:25, but I had to keep holding myself back and tell me, ‘at least get to (mile) 15 and then you can start thinking about the end.’ ... And then around I’d say mile 22, everything started hurting.”

South Weber resident Amy Cook was the runner-up on the women’s side and she crossed the finish line in 3:02:04. Providence’s Maika Carlsen, the 2019 titliest, finished third, but improved on her time from a year ago (3:08:08).

To account for social distancing, Logan Marathon race organizers had the athletes start in groups of three every five seconds.

“Thank you to the Logan Marathon for putting on a such a great race and making us feel safe during it,” said Perry, who averaged a 6:46-per-mile pace.

It was a memorable Saturday for Idaho Falls resident Debbie Anglin, who completed her 100th marathon. The 64-year-old covered the course in 5:03:02.

Anglin’s first-ever marathon was the inaugural Top of Utah Marathon in 1999. That race was held from ’99-2018.

The second installment of the Logan Marathon also featured three others disciplines — a 20K, 10K and 5K.

Former Ridgeline High standout Eric Nelson handily captured the 20K (12.42 miles) title by clocking in at 1:10:31. Logan’s Kelsey Thorne was the top female athlete and her time of 1:25:16 was good enough for the No. 5 spot overall.

Several current Utah State runners dominated the field in the 10K and 5K. For starters, Aggie sophomore Camren Todd reigned supreme in the 10K by two minutes with his blistering time of 29:03. Rachel Young was the top female competitor and finished sixth overall with an impressive time of 35:04.

USU harriers Katie Haviland and Mattie Geddes were both credited with blazing times of 16:22, with Haviland crossing the line first and claiming the overall 5K crown. Logan’s Landen Chugg, the top male placer, was fifth overall as he completed the course in 17:07.