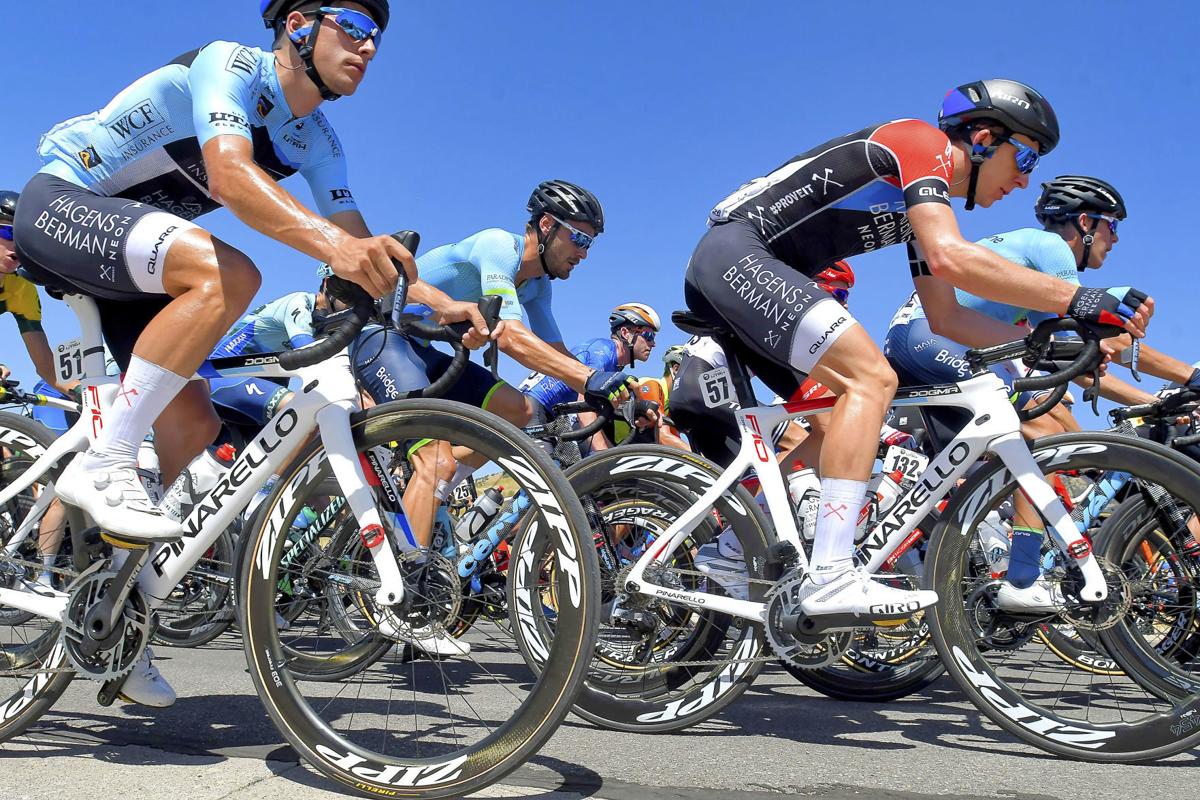 Joao Almeida (51) and Kevin Vermaerke (57) along with other cyclists ride through the streets of North Logan during the Tour of Utah on Tuesday. To view more photos from the race, go to hjnews.com. 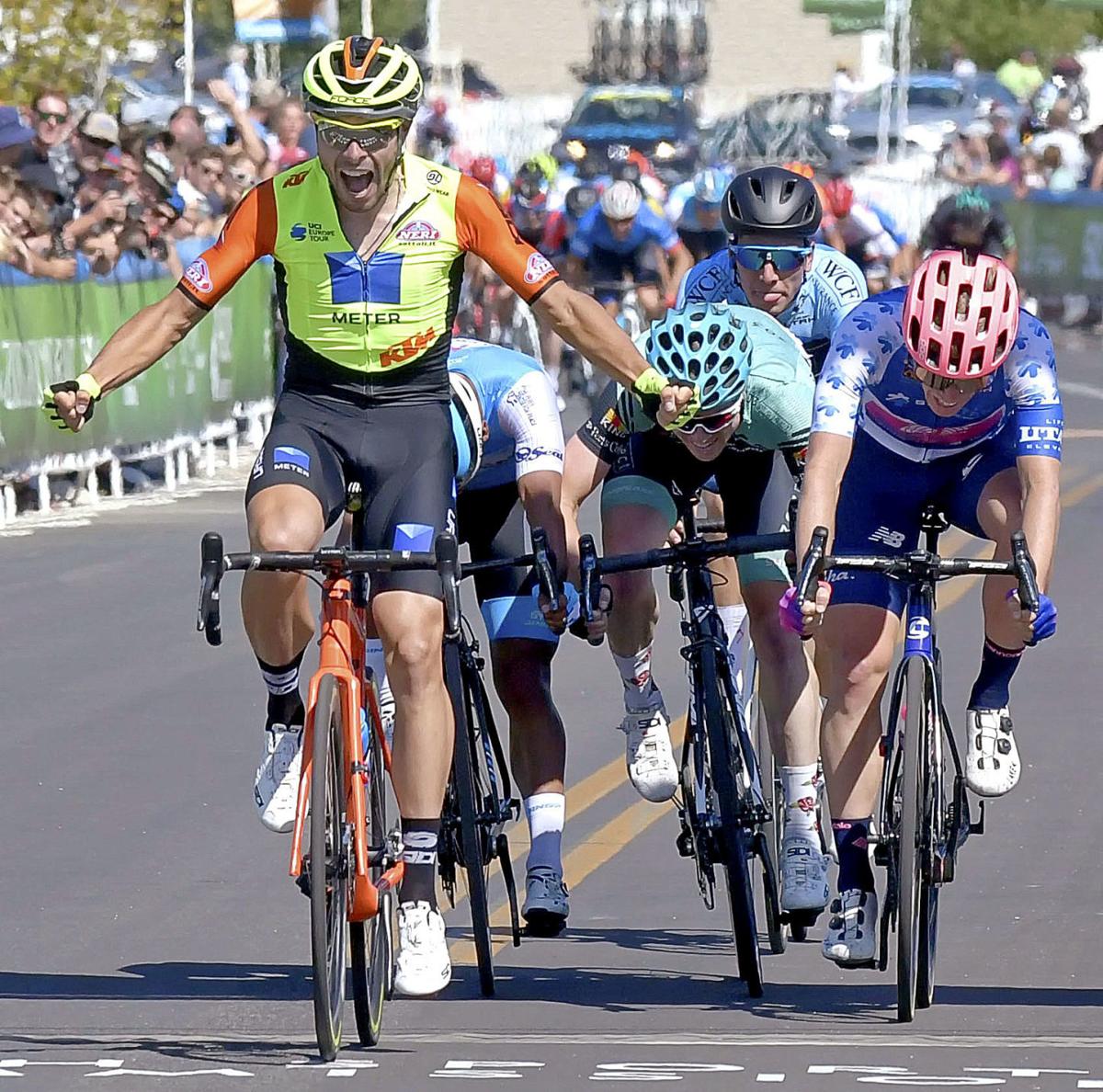 Umberto Marengo celebrates as he crosses the finish line to win Stage 1 of the Tour of Utah on Tuesday in North Logan.

Joao Almeida (51) and Kevin Vermaerke (57) along with other cyclists ride through the streets of North Logan during the Tour of Utah on Tuesday. To view more photos from the race, go to hjnews.com.

Umberto Marengo celebrates as he crosses the finish line to win Stage 1 of the Tour of Utah on Tuesday in North Logan.

NORTH LOGAN — Many thought it would be a day for the sprinters.

While there was a sprint at the end of the 87-mile race Tuesday afternoon, it was only between six riders. The peloton was charging near the end of Stage 1 of the 2019 Larry H. Miller Tour of Utah, but the gap was too great.

Italian Umberto Marengo of Neri Sottoli-Selle Italia-KTM came from fifth place to first with less than 100 meters to the finish. With fans lining both sides of the finishing area and pounding on the sides of fences, Marengo captured first to their delight.

“The team worked perfectly,” Marengo said through a team translator. “We had Manuel Bongiorno in the breakaway so no one had to work until the final laps. When Bongiorno had a flat tire, the team moved forward. On the last lap, I and (Sebastian) Schönberger decided to attack. Schönberger was not as fast as me, so Schönberger worked for me and started to anticipate with three K (kilometers) to go. At the end, this was the perfect move because I could launch my sprint and win.”

He crossed the finish line, which was located on the road between Green Canyon High School and the RSL training facility. The race started there as well three hours and 23 minutes earlier.

It’s the third time in 15 years that the Tour of Utah has had a stage in Cache Valley. North Logan City played host this time on a totally new course.

After all the racing, it came down to the final lap of a 7.2-mile loop that went around North Logan, Hyde Park and finished near the RSL training facility. The race finished with five circuits of that loop. While Marengo was a surprise winner, there was also a change in the overall standings.

Lawson Craddock of EF Education First started the day in second place behind James Piccoli of Elevate-KHS Pro Cycling. He was just six seconds back and seized an opportunity when Piccoli suffered a flat tire just before the final lap. Craddock said after the race he never wishes something like to happen and wasn’t sure what was going on, but knew Piccoli had slipped out of the peloton.

With several crashes during the last few laps and others having mechanical problems, Craddock took advantage of the chaos. Just as Piccoli was able to rejoin the peloton thanks to his teammates working to get him back, Craddock initiated an attack with about three miles to go.

“Everyone was on the limit,” Craddock said. “Alex (Howes) made a really good call. He noticed that there was a small riser with three and a half, four K (kilometers) to go in the middle of the descent that would be a good place to launch an attack. I kind of went from there. I was able to get some speed, get a gap and from there, there was five or six of us and the race played out.”

Craddock finished second to Marengo, but was far enough ahead of Piccoli to earn the yellow jersey. He has a six-second lead over João Almeida of Hagens Berman Axeon, who was fifth in the stage. Remaining in third place is Serghei Tvetcov of Worthy Pro Cycling, 12 seconds down. Moving into sixth place is Joe Dombrowski of EF Education First, the overall winner of the 2015 Tour of Utah, who is 21 seconds back. Piccoli is now 26 seconds back and sits in the 13th position.

Almeida, who is wearing the white jersey for the best young rider, recovered from a crash early in the circuits and was able to follow the attack of Craddock.

“I had to change my bike, so I spent a little energy there,” Almeida said. “The last climb was quite hard, but he (Craddock) attacked and I was in the right place to follow.”

With the Green Canyon High School marching band playing near the start line, the race began at 12:38 p.m. There was a solo attack right out of the gate, but it didn’t last long. However, as Marengo mentioned a teammate being in a breakaway group, there were five riders that got clear of the peloton five miles into the stage. Those five stayed in front as the course went through Benson, Newton, Trenton and up Little Mountain twice, and back to North Logan.

Mishaps and tired legs left just Travis Samuel of DC Bank Pro Cycling Team in front for several laps. After being in front for 75 miles, he was finally absorbed by the peloton. Samuel was awarded the Most Aggressive Rider jersey following the stage.

“There’s a very strong field here,” said Craddock, who was wearing a straw hat given to him by local cycle shop Joyride Bikes. “... The point that we (EF Education First) had coming into this race (is) we wanted to really just race our bikes and find the enjoyment. Today was a big step for that, and we’re looking forward to the rest of the race.”

Stage 2 was on the minds of the cyclists as soon as Tuesday’s action ended. It starts in Brigham City and finishes at the 8,900-foot summit of Powder Mountain on Wednesday — a massive ascent from Eden to Hidden Lake Lodge. It is one of the steepest roads in Utah, with gradients rising to 16 percent. The 8.6-mile climb will pack a punch to the legs and lungs of the best climbers in the world.