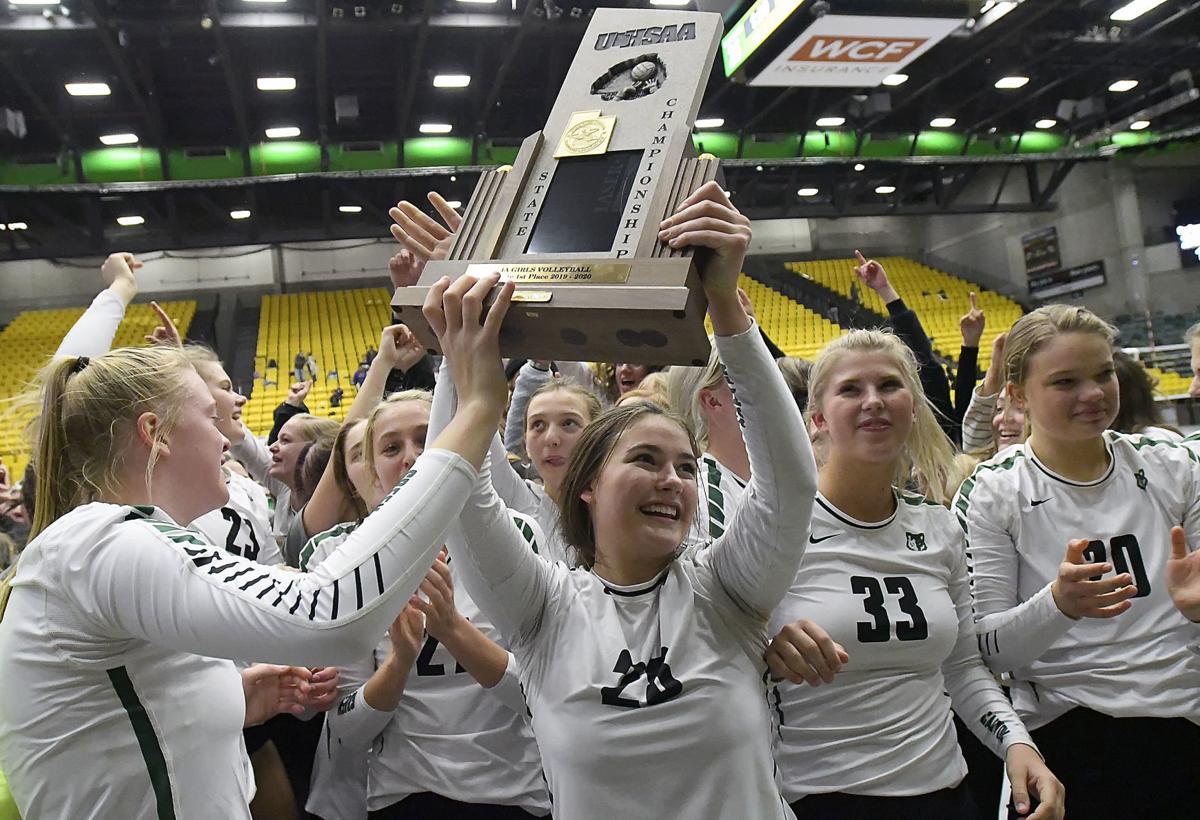 Green Canyon players celebrate after they defeated Desert Hills 3-1 to win the 4A volleyball championship on Wednesday in Orem. 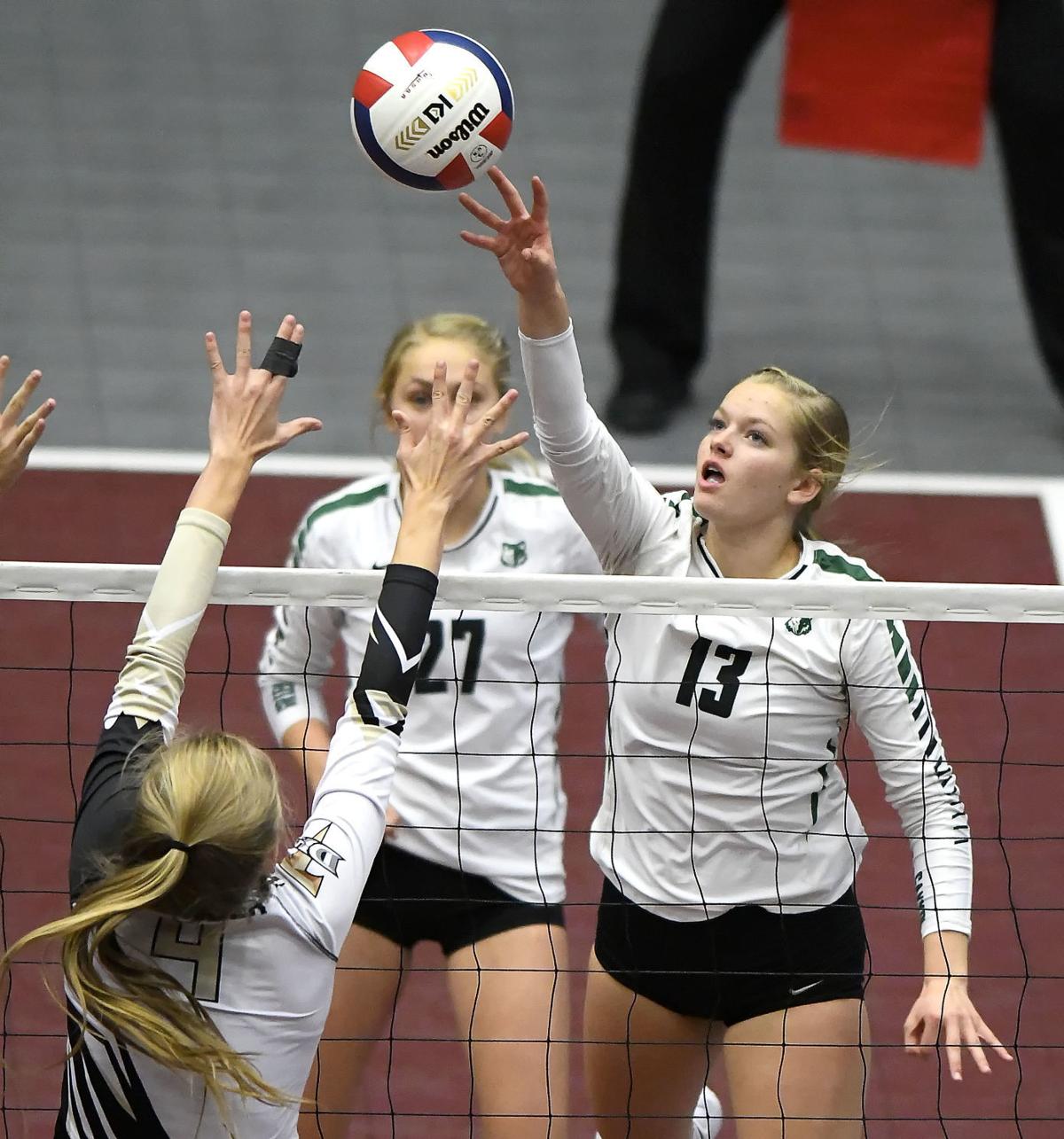 Green Canyon’s Jacie Walker (13) hits the ball over the net as Desert Hills’ Ellie Chase defends during the championship match of the 4A volleyball tournament on Wednesday in Orem. 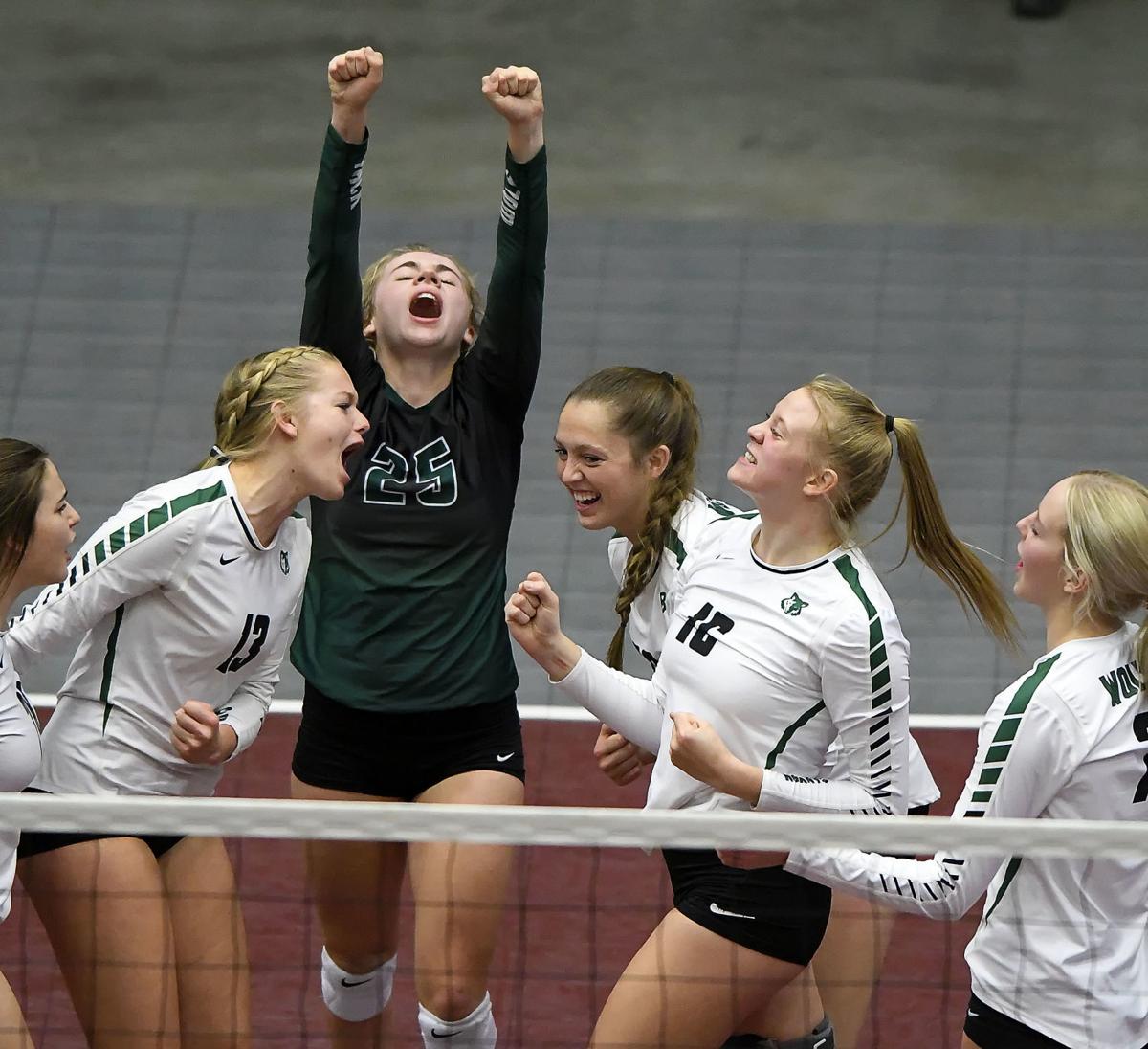 Green Canyon players celebrate after defeating Desert Hills in the second set of the 4A State Championship Wednesday night in Orem. 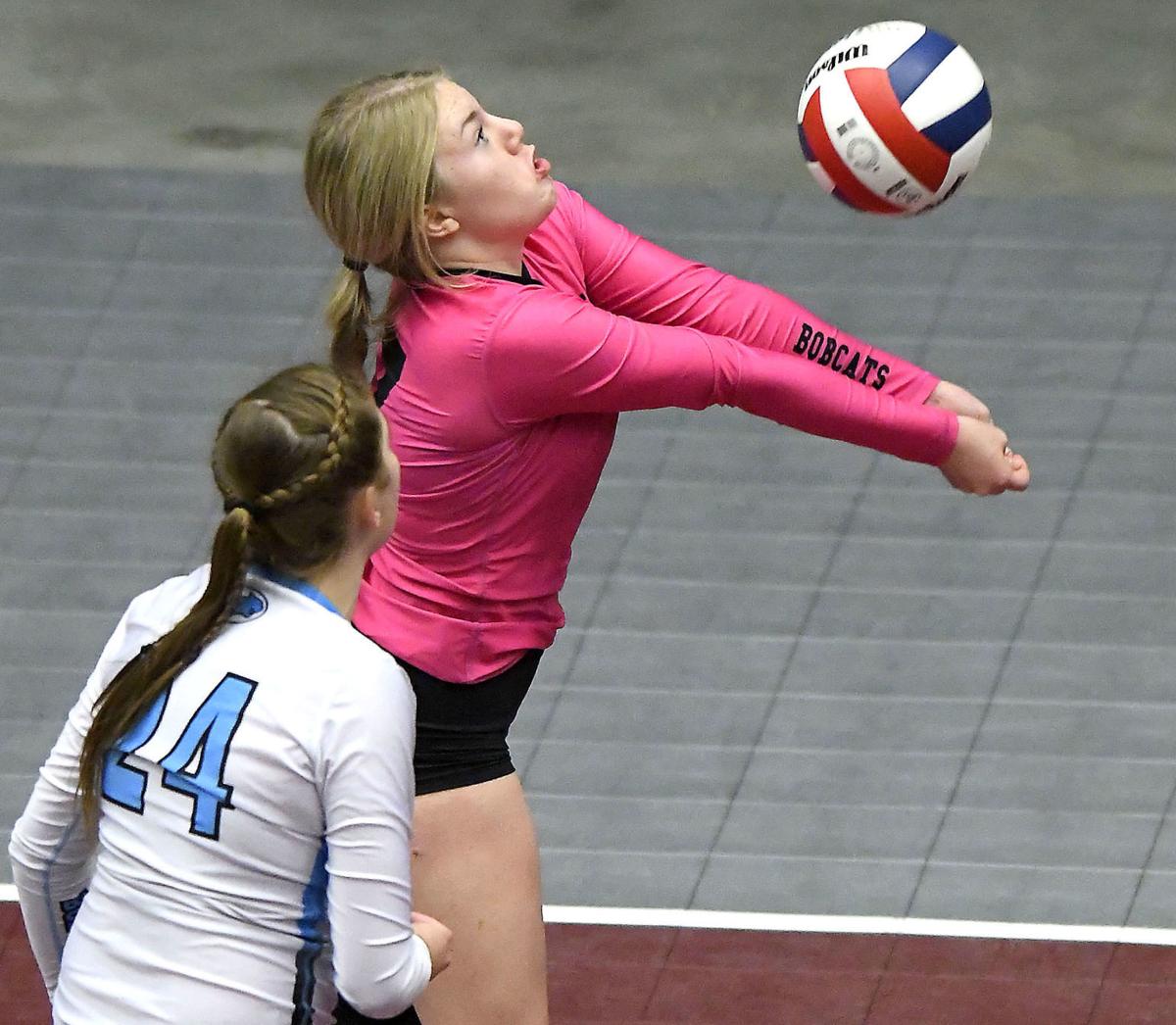 Sky View's Kelsey Spackman hits the ball as Kaitlyn Hiatt (24) helps defend against Dixie during the 4A volleyball tournament on Wednesday in Orem.

Green Canyon players celebrate after they defeated Desert Hills 3-1 to win the 4A volleyball championship on Wednesday in Orem.

Green Canyon’s Jacie Walker (13) hits the ball over the net as Desert Hills’ Ellie Chase defends during the championship match of the 4A volleyball tournament on Wednesday in Orem.

Green Canyon players celebrate after defeating Desert Hills in the second set of the 4A State Championship Wednesday night in Orem.

Sky View's Kelsey Spackman hits the ball as Kaitlyn Hiatt (24) helps defend against Dixie during the 4A volleyball tournament on Wednesday in Orem.

OREM — There is always a time for a first.

The Green Canyon volleyball team won its first-ever state championship in volleyball or any sport for that matter. The Wolves got off to a great start against Desert Hills and weathered some storms to take the 4A Volleyball Championship on the campus of Utah Valley University in four sets, 25-12, 27-25, 18-25, 25-23.

The Wolves (22-10) certainly got off to the start they wanted. Green Canyon never trailed in the opening set as the designated home team reeled off runs of 6-0 and 6-1 to build a comfortable lead at 20-8. Olivia Chadwick had three kills down the stretch, including the set winner.

In the second set, it was much closer throughout as there were six lead changes and eight ties. Trailing 25-24, the Wolves reeled off three straight points to take the set. After a kill by Jacie Walker, a block by Chadwick and Sabree Adams, the Thunder had an error that gave Green Canyon a 2-0 lead.

Desert Hills (20-9) got back in the match by never trailing in the third. Green Canyon tied it five times, but could never get in front. The Thunder used a 7-1 and 8-0 run to build a 24-14 lead. The Wolves tried to rally late, but was too far behind.

Green Canyon fell behind to start the fourth, 4-0, but then scored five unanswered to take the lead. The Wolves used another 5-0 run to build a 16-10 lead as Sarah Blau finished the run with a ace. The Thunder clawed back to tie it at 23-23.

A kill by Madilyn Miles gave the Wolves the lead again. The match ended with an error by the Thunder.

Green Canyon was second in the state academically as a team. Pine View was tops.

For three other Cache Valley teams, their visit to the state tournament wasn’t exactly what they had hoped for. However, each had great moments and made it to the last day.

Sky View outside hitter Haley McUne finished off a wild fourth set and closed the match with a big swing for her 18th kill against the Flyers after a delay for a fire alarm in the arena. The Bobcat junior had plenty of help as once again the northern-most school in the state used a balanced attack.

“We needed someone to just put that away, and she (McUne) got the winning kill,” Sorensen said. “Carly (Cottle), our senior, was a rock star. She is my big, outside hitter and she led in digs.”

Cottle and Adelyn Wengreen are the lone Bobcat seniors. Cottle had 13 kills and 13 digs, while Wengreen had 10 digs and two aces.

“It was fun to see those two seniors go out with a win,” Sorensen said. “It won’t mend a broken heart, but it will feel better.”

Sky View had five players record double digits in kills as the Bobcats had 59 as a team. Joining Cottle and Wengreen were McUne (11), Kaitlyn Hiatt (11) and Kelsey Spackman (10).

McUne hit .394 in the third-place match, had two aces and passed at a 2.20. Hiatt had three aces, while Jenna Gibbons had seven kills. In the block department, Gibbons had five, Brinley Forsgren had four and Kaitlynn Smart recorded three.

“Our semifinal was really hard,” Sorensen said. “We are kind of a roller coaster team, and we’ve had some ups and downs. We were up and then down as fast as anything. We kind of fought against ourselves. I hope they learn from that because we are a young team. Lesson learned.”

Unlike a year ago, the Bobcats were not as dominate at state. In 2018, Sky View did not drop a set in its run to the title. This time around the Bobcats played from behind in three of the four matches.

“I don’t know if that’s the best way to go,” Sorensen said with a smile. “We did not try to do that. We are learning. … They fought through it, and I’m proud of them.”

After starting with a loss on Tuesday, Mountain Crest finished off the tournament with three straight victories. The Mustangs were just one of four teams among the 4A ranks to end their season with a win as Mountain Crest (22-9) captured sixth place with a 25-15, 25-8, 25-18 win over Uintah. Earlier in the day, the Mustangs swept Crimson Cliffs, 25-13, 25-22, 26-24.

“It was a much better day today,” MC head coach Kindra Anderson said. “I just think nerves got the better of us yesterday. It’s so different being at the state tournament. We struggled in the first match (against Dixie), but played much better after that.”

The Mustangs took the approach of having fun on Wednesday. Six seniors — Jordan Flippence, Addie Wood, Alison Pehrson, Tally Sofonia, Ashtyn Tholen and Katie Keller — got to end with a win. Flippence and Keller both served up multiple aces, while Flippence was diving all over the floor for digs, finishing with 38.

“It’s just a positive note for the seniors,” Anderson said. “Katie Keller was awesome in our last match. I’m glad she ended well. … There is a thought in the back of your head that you could be playing for a championship, but a lot of teams probably feel that way. Sixth place is still good.”

Mountain Crest finished off its last match by scoring five straight points, as Pehrson got two kills, Jaycee Osborne had a kill and two aces.

In the two matches, Pehrson had 15 kills and 25 digs. Ella Douglass had 16 kills and seven blocks, while Keller had 13 kills and six aces. Osborne had 52 assists and 21 digs, while Wood had 17 digs.

“We dug in after being done and to be able to come back and win was a big deal for us,” Ridgeline head coach Denae Pruden said. “... I’m really excited for our future, but I am also going to miss our seniors.”

“I feel like the girls were really fighting hard, but we just couldn’t quite pull it off,” Pruden said. “I think we were a little tired. … I was proud of the girls for fighting, even though some things were not going our way. That was nice to see.”

All of the Region 11 teams did well at state this year.

“I hope Green Canyon goes and gets it (state title),” Sorensen said. “Our region is amazing. We play some strong ball. Volleyball in Cache Valley is exciting.”