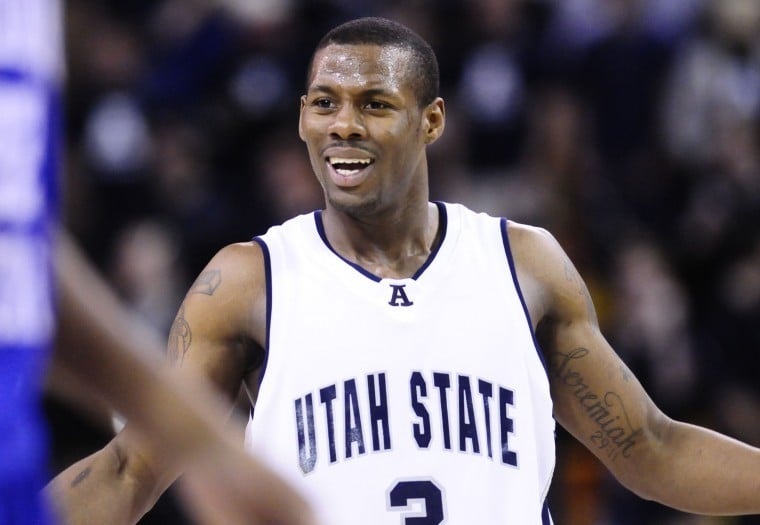 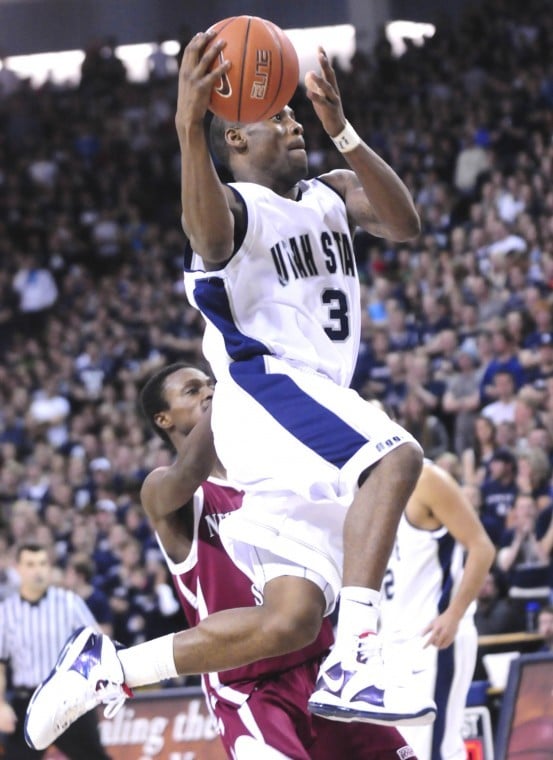 USU's Brockeith Pane drives to the basket in the second half against New Mexico State at Spectrum Saturday.
1 of 2

USU's Brockeith Pane drives to the basket in the second half against New Mexico State at Spectrum Saturday.

Being in the right place is important to Brockeith Pane.

The Aggie point guard feels he is right where he belongs. That would be running the Utah State offense and doing all he can to get better.

"I feel I'm fitting in better," Pane said Tuesday after practice. "I need to cut down the turnovers, get my assists-to-turnovers up. Everything else is cool, everything else is going real good. I like the guys here. They are all fun to play with and they all want to win."

Pane has experienced a different feeling. The 6-foot-1 guard signed with Houston out of high school and spent a hard season with the Cougars. After sitting out for a year, he spent last season at Midland Junior College in Texas.

While he credits Houston head coach Tom Penders for helping him develop his game, his teammates there were more concerned with themselves. That is not the case on the USU men's basketball team.

"These guys here are more mature than those guys (at Houston)," Pane said. "These guys are a lot older here and encourage you to do the right thing on and off the court. Those guys didn't care, as long as they were getting their minutes and their points. Here they come at you different, tell you in a kind-hearted way what you're doing wrong and what I need to do. They also tell me to not get so down on myself."

Which has been something he has worked on. Aggie head coach Stew Morrill has tried to get the junior to dial down the emotions. Pane admits he can be his own worst critic, pointing out a two-on-one fastbreak in the last game that came up empty.

After a quick start in the season opener against Weber State, where Pane scored 23 points, grabbed five rebounds and had four assists, there were some up-and-down games through November and most of December.

"It was a pretty good start (against Weber State); I was just so hyped to be back in Division I and just ready to play," said Pane, who was named the preseason WAC Newcomer of the Year. "Then I kind of slacked off a little bit."

"I think since conference, I've been playing pretty good," Pane said. "Mentally, I'm trying to stay focused, trying to play my hardest for the seniors. I know when I'm a senior, I want the guys to play hard, so I'm just trying to return the favor."

His effort has been noticed.

"I'm really pleased with Brockeith," Morrill said. "As we have gotten to league, that's when I told him he needed to play."

And he has for the most part.

There was a bit of a "relapse" against New Mexico State last Saturday, when he got into some foul trouble. But last Thursday Pane proved his worth, flirting with a triple-double when he scored 11 points, pulled down seven rebounds and dished out nine assists against Louisiana Tech. Pane called that game his best as an Aggie.

"That was just playing hard and not getting tired," Pane said. "I was able to find players and also score when it was my time. ... Our big guys do such a good job boxing out, the guards have an opportunity to go get rebounds."

Pane is still working on building his confidence from 3-point range, as he feels more comfortable on the move. Lately he has been getting a lot of his points on driving to the hoop and getting fouled.

"He's a load going to the basket," Morrill said. "He's strong. We need him to use that strength a little more on defense, more consistently."

The Dallas native is well aware of the coach stressing defense. When asked to list his biggest strength, Pane responded by talking about his need to get better on the defensive end. He did admit to being able drive and push the ball on the fastbreak.

"He's really tried to do the things we need him to do," Morrill said. "As I've said many times, Brockeith wants to do the right things. He's a very good guy to coach. You tell him something and he tries.

"... His assists-to-turnovers are improving. He's more comfortable scoring the ball and is good on the break. Sometimes I think we need to call his number a little more in our offense. We have discussed that. He is doing some real good things."

Pane was recruited by Aggie assistant coach Tarvish Felton, who tried to get the Texan to come north two years ago. He decided to play a year at Midland to get the feel of the game back after sitting out a year.

"Me and my mom (Sandra Combs) made the decision and I prayed about it," Pane explained. "It was the right decision for me. ... I thank God for landing me here. The people are nicer here. I feel more safe here than back home."

Faith is important to Pane, who has nine tattoos and most of them are tied in with biblical verses. An angel on his left shoulder is in memory of his brother who died when he was in ninth grade. Jesus Christ is on his right shoulder, along with Philippians 4:13. His 4-year-old son Trenton is on his right wrist. Jeremiah 29:11 is on his left bicep.

So does talking about his son. He often likes to share stories of Trenton, who lives in Dallas.

Pane, who is studying interdisciplinary studies, wants to be a high school coach and help youth. He also wants to be there to watch his son play sports, something he didn't have, but does credit his mother for giving him support.

For now, he is concentrating on improving and helping lead the Aggies to more wins.