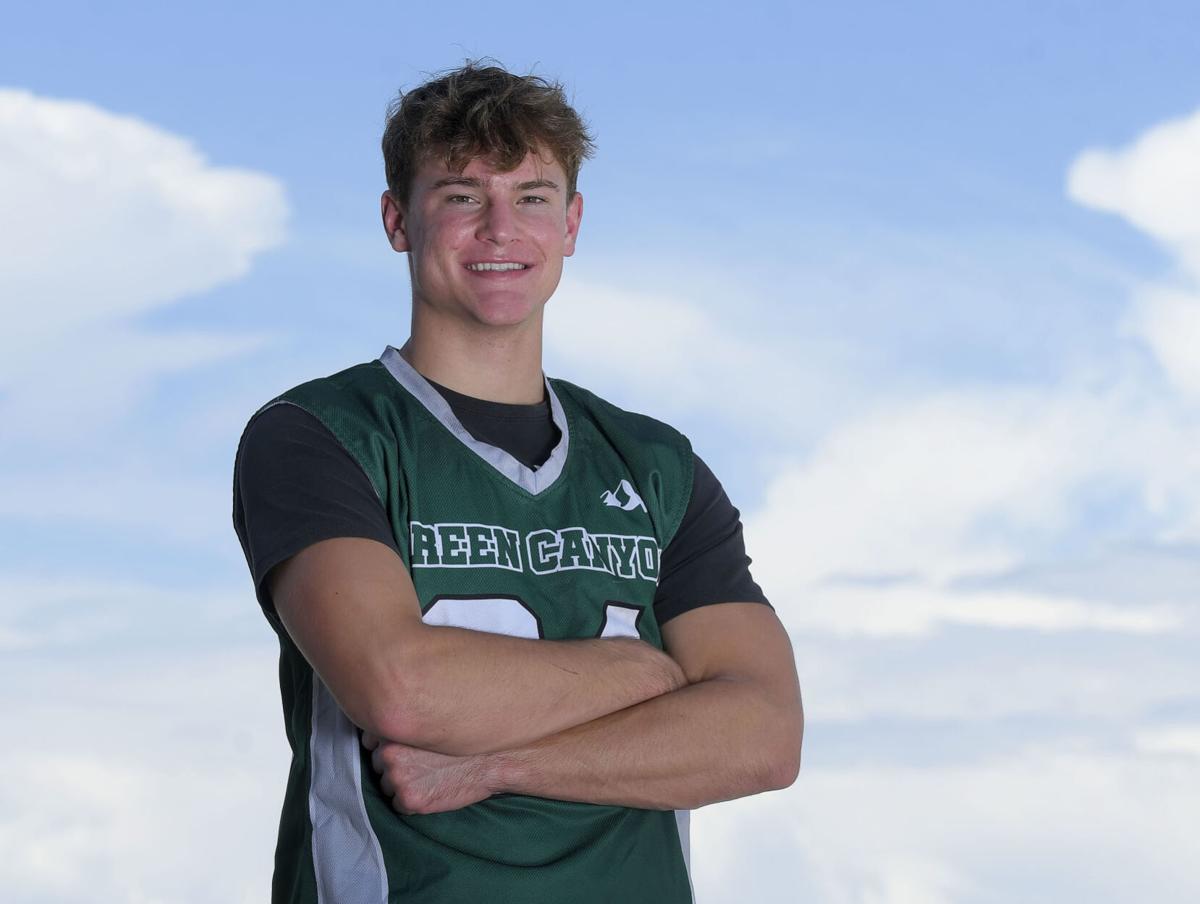 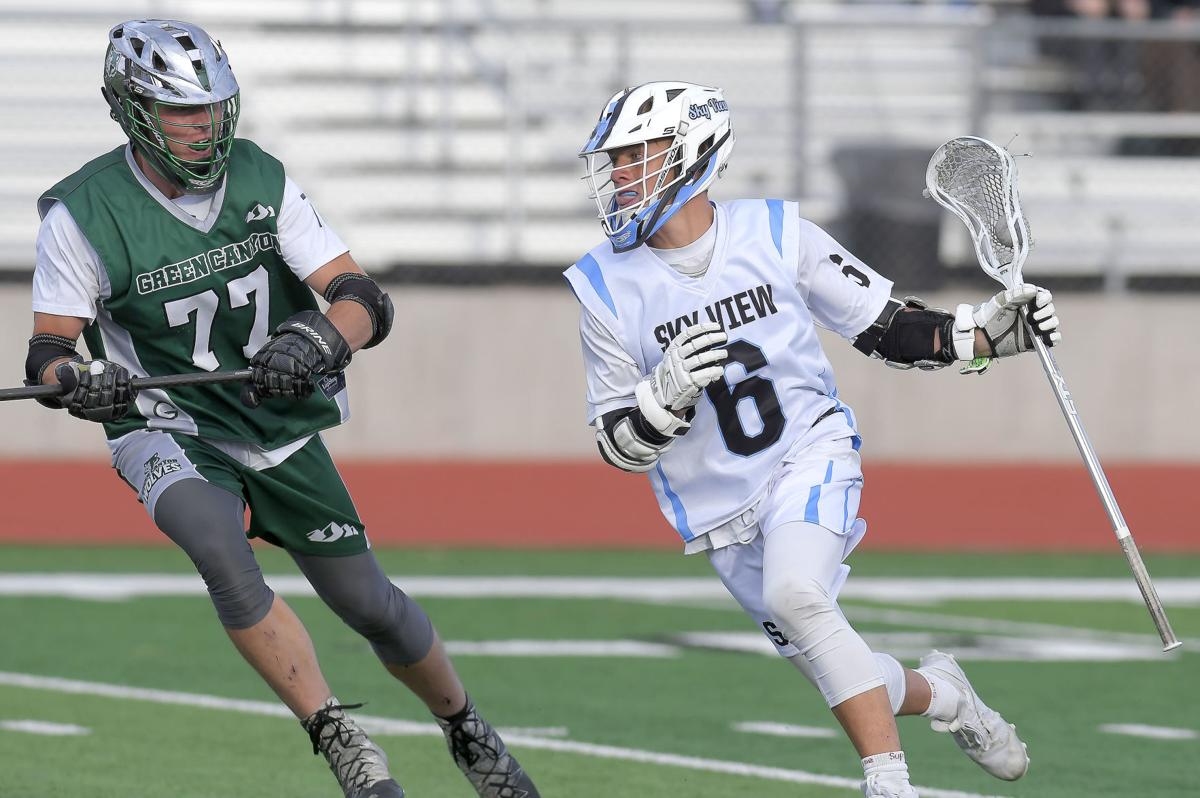 Sky View's Gage Leishman (6) brings the ball down the field as Green Canyon's Luke Lee defends during a game this past spring. Lee was a second-team all-state selection as a senior.

Sky View's Gage Leishman (6) brings the ball down the field as Green Canyon's Luke Lee defends during a game this past spring. Lee was a second-team all-state selection as a senior.

NORTH LOGAN — High school football fans in Cache Valley quickly learned who Jake Lundin was in the fall of 2019 as the athletic dual-threat quarterback accounted for 3,159 yards of total offense and 34 touchdowns.

In his two seasons as Green Canyon’s starting signal caller, Lundin passed for 3,827 yards and 37 touchdowns, vs. 19 interceptions, and rushed for 2,295 yards and 23 scores. No. 24 earned all-state honors in each of his final two years on the gridiron.

Indeed, Lundin was very well-known throughout the Beehive State for his prowess on the football field before his high school career was over. More hidden from the public’s view was Lundin’s proficiency as a well-rounded lacrosse player.

Nevertheless, lacrosse is arguably Lundin’s better sport. The North Logan native was one of Cache Valley’s top high school lacrosse players well before he was gaining notoriety on the football field. Case in point: Lundin went off for six goals in Green Canyon’s 21-11 victory over Logan as a sophomore in the spring of ’19, and he was a part-time starter on Sky View’s varsity team as a freshman.

Lundin was primed for a big junior season, plus Green Canyon was loaded with talent last spring, but COVID-19 got in the way. The Wolves only got to play once in 2020 before the season was canceled, and it was supposed to be a historic one, inasmuch as lacrosse was sanctioned by the Utah High School Activities Association (UHSAA) for the first time.

“I felt really bad, honestly,” Lundin said when asked about last year’s senior class. “I mean, I don’t even know how I would feel. That would be terrible. I just feel bad for them.”

Fortunately for Lundin — and the rest of the lacrosse players from the class of 2021, for that matter — he was able to make up for lost time as a senior. The Wolves went 16-2 this past season and proved they were one of the best teams in the entire state. Green Canyon’s only two setbacks were to undefeated Corner Canyon and Olympus, programs that finished the year with a combined record of 37-2.

“I take a lot of pride in (proving we were a state level team),” Lundin said. “Personally, I think we could have gone a lot further than we did. It’s just simple mistakes that kept us back.”

Of Green Canyon’s 16 wins, 13 were by double digits as the team ranked third in the entire state in scoring margin (11.94) and third in goals per game (17.29). The Wolves also finished sixth among all teams from the Beehive State in assists with 157.

Not only were the Wolves stacked with talent this past spring, they had a great team dynamic, which is something Lundin really enjoyed.

“It was really fun,” said Lundin, a three-sport athlete who averaged 6.0 points and 4.8 rebounds per game as a senior on Green Canyon’s basketball team. “There were a lot of underclassmen and a lot of the seniors, we would just goof around with them and try to get them loose before the games. A lot of people think it’s good to get serious and sometimes it is, but it’s always good to be relaxed and enjoy the moment. I think we did a good job of that.”

Not only did Lundin establish himself as one of Green Canyon’s leaders, he was a difference maker on the field from his midfielder position. The son of Bruce and Amy Lundin and Susie Sutherland flat-out excelled for the Wolves, whether he was scoring goals, dishing out assists, gobbling up ground ball after ground ball, winning faceoffs and forcing turnovers.

Lundin did it all for Green Canyon and he is the first ever Herald Journal All-Valley Player of the Year in boys lacrosse.

“Jake is that athlete leader everyone wants on their team,” GC head coach Troy Oldham said. “He is focused and relentless in his efforts to win, and he never quits. Jake proved that he was one of the most valuable faceoff middies in the state because he would also stay on the field after the faceoff to devour ground balls, score, assist and play near-perfect defense.”

The senior captain was a big reason why Green Canyon ranked sixth in the entire state this past season in ground balls won (795) and seventh in faceoffs won (271). Additionally, Lundin secured a spot in the top 10 individually in ground balls won (fifth with 159) and assists per game (ninth, 2.29).

Lundin and Logan’s Cole Hoglund were arguably the best faceoff performers in Utah’s 4A classification this past season. Lundin even won 10 of 24 faceoffs against Waterford star Spencer Reagan, who is regarded as the best prep faceoff specialist in the state.

In addition to controlling a game by winning faceoffs and ground balls, Lundin was also a consistent offensive threat. He scored in all but three games this past season and dished out at least one assist in 15 of 18 games. Lundin recorded three of more assists in nine games, including seven straight at the end of the season. The captain also tallied a hat trick of goals in five consecutive Region 11 contests and netted three of more goals 10 times as a senior.

Indeed, Lundin was a versatile performer for the Wolves, who had several other dynamic players, including fellow all-state selections Mason Anderson (attackman) and Luke Lee (defender). Anderson and Lee were second-team all-state honorees — the all-state teams weren’t divided into classifications like most sports — while Lundin and Jacob Regen (defender) were named to the honorable mention squad.

“Wow, I’m going to miss these three,” Oldham said of Lundin, Anderson and Lee. “The other person I think grounded our team was Jacob Regen. His stats were not incredible, but he quietly played flawlessly this past year.”

It was a heartbreaking end to the 2021 campaign for Green Canyon, which was edged by Olympus, 13-11, in the quarterfinals of the Division A State Championships. The Wolves led the Titans 9-7 heading into the fourth quarter.

The postseason was comprised of three divisions, and the top 16 teams in the final RPI standings were placed in the A division. Had the state tournaments been laid out according to classifications, Green Canyon would have been the clear-cut favorite in a traditional 4A bracket.

Did that bother the Wolves at all?

“After the Olympus game we talked about it for a little bit, but not too much,” said Lundin, who has been playing lacrosse since he was a fourth-grader. “I didn’t really think about it because that’s not how it is.”

Although it wasn’t the ending Lundin was hoping for, it was still a memorable season, and Green Canyon’s coaching staff had a lot to do with that, Lundin asserted.

“The coaching staff has always been phenomenal at Green Canyon for lacrosse,” said Lundin, who also grew up playing baseball and soccer. “Troy does a really good job with all of the coaches and they all work really hard, even though they’re getting paid hardly anything. That was probably my favorite part (of high school lacrosse) was the coaches, just the atmosphere they helped create.”

Simply put, it was a banner season for one of the premier offensive players in the state. Anderson proved this by ranking in the top 10 among all Utah athletes in assists (fourth with 53), points per game (sixth with 6.76) and goals per game (ninth with 3.65).

No. 18 paced all local players in goals (62) and assists, and netted at least three goals in all but one of Green Canyon’s games, plus dished out three or more assists an impressive 12 times. Brighton was the only opponent to keep the attackman off the scoreboard, but he still managed to contribute with four assists.

Anderson, who is adept at shooting with either hand, racked up seven goals in a game against Ridgeline, finished with six goals and six assists against Mountain Crest, and poured in six goals in showdowns against Bonneville, Mountain Crest (twice) and Waterford. Additionally, the senior captain came through with five goals in Green Canyon’s round of 16 playoff victory.

“I can’t think of a time when Mason hasn’t had a lacrosse stick in his hand or hanging out of his backpack,” Oldham said of the Region 11 Offensive Player of the Year. “He epitomizes the focused athlete and leader who puts in the work to improve outside of practice and season. As a sophomore, we predicted that Mason would be in the top 10 percent in the state, and he delivered. I predict that Mason will play Division I (college) lacrosse in the next four years.”

There’s no question the 6-4 Lee was an intimidating presence on the field, but there is so much more to his game than size and strength. No. 77 is also a fundamentally sound player and has very good stick skills for a defender.

Led by the one-two defensive punch of Lee and Regen, the Wolves never gave up more than six goals against a Region 11 foe. Green Canyon allowed five or fewer goals in 12 of 17 games, and three or fewer on nine occasions. The Wolves held Mountain Crest, Bear River and Box Elder to a single goal.

The senior captain was Green Canyon’s leader in caused turnovers with 31, plus he ranked fourth on the squad in ground balls with 57 — a noteworthy accomplishment for a defender. Lee also a capable goal scorer when given the opportunity as he found the back of the net against Logan, Sky View and Bear River, and was credited with an assist against Bear River.

“Luke loves this game and it shows in his work ethic and performance,” Oldham said. “Luke is a dependable team leader and his size, strength and stick skills made him a daunting force for offensive players; he just shuts them down. His stick skills are so good that he is also an offensive threat off a ground ball, and would often skillfully run the field to set up a score.”

Not only did this senior won faceoff after faceoff for the Grizzlies, he was very fluid at his craft. In fact, Hoglund made it look effortless at times and not a battle of attrition like other players at his position.

The middie also corraled a whopping 142 ground balls, which was 101 more than anybody else on his team and ranked ninth in the entire state. Hoglund chipped in with four goals and nine assists — the third most among Logan players — to boot.

“Cole’s work ethic at the face is unmatched,” LHS head coach Bo Olsen said. “He lived in the weight room in the offseason and put hours into mastering his craft outside of practice in season. Physically and mentally, Cole knew how to approach different styles of faceoff guys. He was quick to create a fast break on offense and, in the rare moments he lost, was quick to play smart defense in transition.”