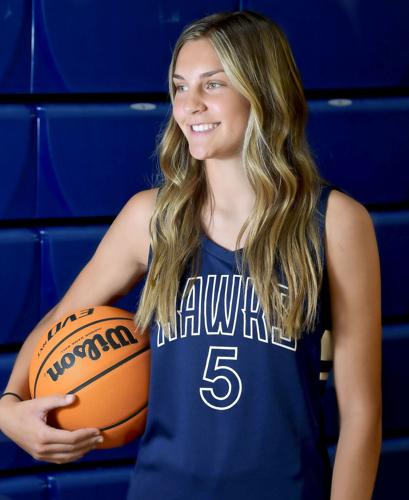 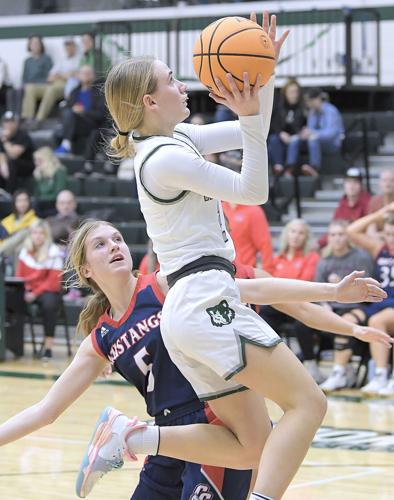 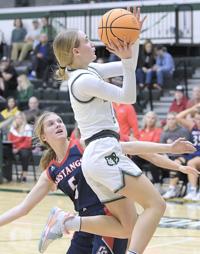 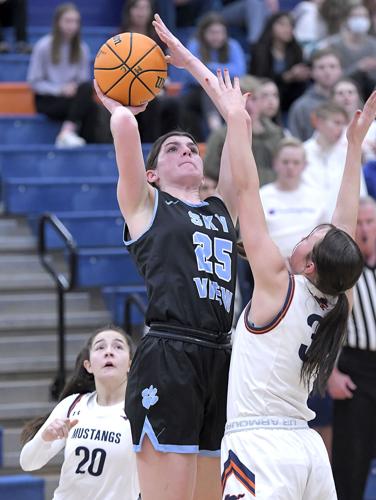 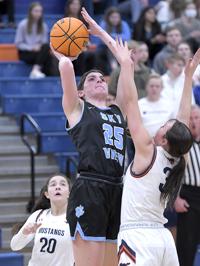 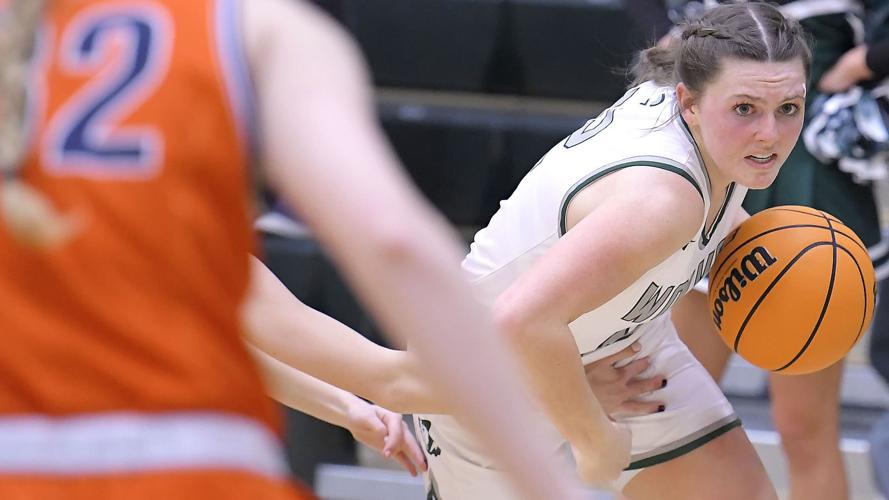 That may be a bit of an understatement. Before reaching high school, Emilee Skinner had competed on teams made up of boys. She didn’t mind and learned a lot.

“I thought I would get better playing with the boys because they are bigger and athletic,” Skinner said. “They are long, so it is a lot different. ... There are a lot of differences between boys and girls. The height, the athleticism, it’s just a lot different. ... I just went out and played. I didn’t think about being a freshman.”

When it came time to play high school basketball, Skinner was more than ready. The 5-foot-11 freshman — who has grown an inch since last season started — scored 19 points in her prep debut at Ridgeline High School and came up with nine steals in a blowout win against Union. Recording double-doubles and flirting with triple-doubles became the norm for the daughter of Erik and Deana Skinner.

“I’ve known and watched Emilee for a long time and have been excited she was going to be a part of our program,” Ridgeline head coach Ainsli Jenks said. “I do think it is an advantage for her to have played against boys. You can tell when you watch her play that she has a little bit of a jump start on people. She understands angles and is a little bit quicker in processing things.”

In her second high school game, a win over Morgan, Skinner had 26 points. Her first double-double came in her fifth game as she finished with 15 points and 11 rebounds. She went on to have a stellar season.

As those statistics attest, this teenager is certainly not a one-dimensional player. She got it done on both ends of the court. In fact, the freshman was named the Region 11 MVP and also took home the region Defensive MVP award.

“I don’t like getting scored on,” Skinner said. “Our team was great at defense. That helped too because you can’t do it without your teammates.”

Despite Ridgeline losing in the 4A state championship game to Desert Hills, Skinner was still named the 4A State Player of the Year by the Desert News.

It’s a no-brainer that the now 15-year-old — she played the entire season as a 14-year-old — has been selected as the 2021-22 Herald Journal All-Valley Player of the Year.

“It’s great to get awards, but I couldn’t have done it without my teammates, the coaching, everything,” Skinner said. “It’s cool, but it’s not all me. I had a lot of help.”

And she did a lot to help Ridgeline be successful. The Providence native led the Riverhawks in scoring (18.3), rebounding (6.8), assists (3.4), steals (3.8), blocks (1.3), field goal percentage (55 percent) and free throw percentage (81 percent). She tied for second in 3-point field goal percentage (33 percent) and was third on her team in 3-pointers (22). Her scoring average was second among all 4A athletes and ninth in the state regardless of classification. Skinner was fifth in 4A in rebounding, fifth in assists (tied 18th statewide) and second in steals (tied 11th statewide).

“That’s what is special about Emilee, she fills all the stats,” Jenks said. “She is never looking for any stat, which is super awesome. Emilee knows what needs to happen in the game, whether it’s get a shot, get a steal, get a block, get an assist. She can just do multiple things. ... More than anything, Em has a stat that people don’t see and that is her leadership. When she is on the floor or on the bench, she believes in her teammates and trusts them to do their job. That’s pretty special from a kid that was 14.”

Skinner called herself a point guard, but quickly adds she can play other positions and does like to post up.

“It was a great season,” Skinner said. “The coaching staff was great, all of the players were great. It was just a great environment to be around.”

Does she take more pride in any of the statistical categories?

“No, I don’t care who scores the ball,” Skinner said. “We work as a team. I don’t care about my stats. Nobody cared how many points they had or rebounds they had.”

There is no particular game that sticks out to the freshman, but she did enjoy some of the road trips. After some time to think, she listed home wins against Desert Hills (where she had 25 points, 8 rebounds and 4 assists) and Sky View (19 points, 10 rebounds, 6 assists) as highlights.

The Riverhawks only tasted defeat twice — in their final non-region game at Sugar-Salem, Idaho’s eventual 3A state champions, and then to Desert Hills in the 4A title game, 58-53. Ridgeline went 24-2 on the season.

“My teammates were great this year,” Skinner said. “Everybody was awesome to be around.”

Skinner started playing basketball as soon as she could pick up a basketball.

“I was probably three or four,” Skinner said.

What gives her a bigger thrill, faking someone out and driving in for a layup or hitting a 3-point shot?

“Well, umm, I just do both,” Skinner said. “They both get me going.

“... I do need to shoot the three more. I was open a lot. I need to have confidence in myself and shoot it more.”

With no seniors and making a run to the state championship game, the future looks bright for the Riverhawks. There will also be high expectations.

“I didn’t want to lose (in the championship game), but it’s good to have everyone back,” Skinner said. “We are excited for next year and will be hungry for a state championship.”

Skinner also plays soccer at a high level. She was a starter on the Ridgeline team that reached the 4A semifinals.

“I get that question a lot, but I don’t really have a favorite,” Skinner said. “... It’s hard being a two-sport athlete, but I work as hard as I can to work on my game as much as possible.”

Skinner is also a very good golfer, but doesn’t really enjoy the sport that her older brother Zack excels at. Her father is the assistant coach for the Utah State men’s golf team.

Her mother is a former college volleyball player and has tried to get Emilee to try the sport. She did play some volleyball as a youth, but with soccer and volleyball being played at the same time of the year, soccer won out.

“Whatever Emilee puts her mind to, she will be successful at,” Jenks said. “She obviously is naturally athletic, but she works hard. If we were playing ping pong, I’m sure she would work hard and probably kick everybody’s butt. She wants to work hard and do her best. She is a fun kid to coach.”

NEWCOMER OF THE YEAR

While she saw a little varsity time as a sophomore, Tensmeyer made a smooth transition to the varsity level her junior season. The point guard did a little bit of everything for the Wolves, who finished third in Region 11 and reached the semifinals of the 4A state tournament. Tensmeyer was named to the all-region first team and the 4A all-state second team.

“Cambree flourished this past season,” GC head coach Alexis Bird-Clegg said. “She has been a great point guard for us and sees the court so well. Her speed creates so many opportunities for our team on the offensive and defensive side of the ball. She really helped anchor the backcourt defensively and our transition on offense.”

Tensmeyer led the team in assists with 3.0 per game — sixth among 4A players — and also had the best field goal percentage among the Wolves at 40 percent. She made 36 3-pointers to lead Green Canyon and rank fifth among 4A players and shot a team-best 35 percent from beyond the arc.

The junior was second in scoring for the Wolves with 12.7 points per game and was third in steals (2.0) and free throw percentage at 62 percent. Her scoring was eighth among 4A athletes.

OFFENSIVE PLAYER OF THE YEAR

This Wolf was no surprise to those in the 4A ranks during the 2021-22 season. McKenna burst onto the scene last year as the HJ Newcomer of the Year and has continued to work on her game.

The 5-foot-9 guard was one of the top scorers in all of 4A and led the Wolves with 16.9 points per game, which ranked 18th among all classifications and third in the 4A ranks. She had a knack for getting to the basket and scoring when her team needed points or a momentum swing.

“Maren is such an important part of our team,” Bird-Clegg said. “She has high energy and is a fierce competitor. She loves to compete and strives to improve each day.”

“She can score from anywhere on the court, which creates tough match ups for opponents,” Bird-Clegg said. “She has a real talent of rebounding on both ends of the floor, which really can change the outcome of a game. She’s a phenomenal basketball player and person.”

DEFENSIVE PLAYER OF THE YEAR

While she had plenty of help on the defensive side of the court, this Bobcat certainly made her presence felt. The 6-foot junior blocked 40 shots during the season, an average of 1.6 per game, which tied for 14th among all classifications and led 4A.

“Mel was so tough for us defensively this year,” SV head coach Vanessa Hall said. “Her length on the inside made it difficult for other teams to get clean shots up on the inside. She was a real presence for us in the paint. This year Mel really worked on her defensive communication, which helped everyone on the court step up and play better defense.”

Hiatt, who was named second team all-state, helped the Bobcats reach the semifinals of the 4A state tournament, where they lost to eventual champion Desert Hills. Sky View finished second in the region.

Hiatt was by far the top rebounder on her team with 7.8 per game — second in 4A — and led the team in field goal percentage at 46 percent. She was second among Bobcats in scoring (11.7) and free throw percentage (65 percent), was third in steals (1.2) and fourth in assists (1.6).

“I love coaching Mel,” Hall said. “She is a great leader for us. She was a big reason for all the successes we had this year.”