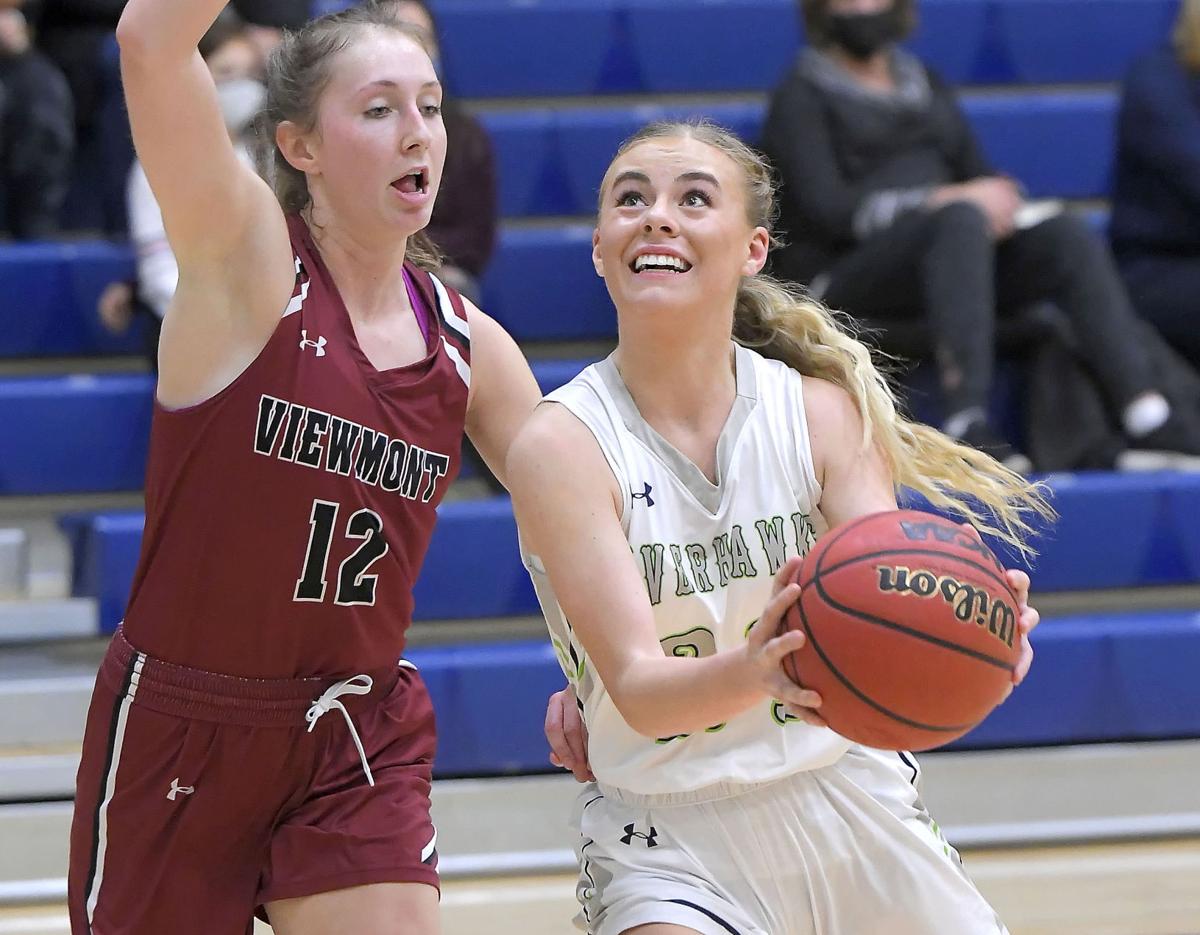 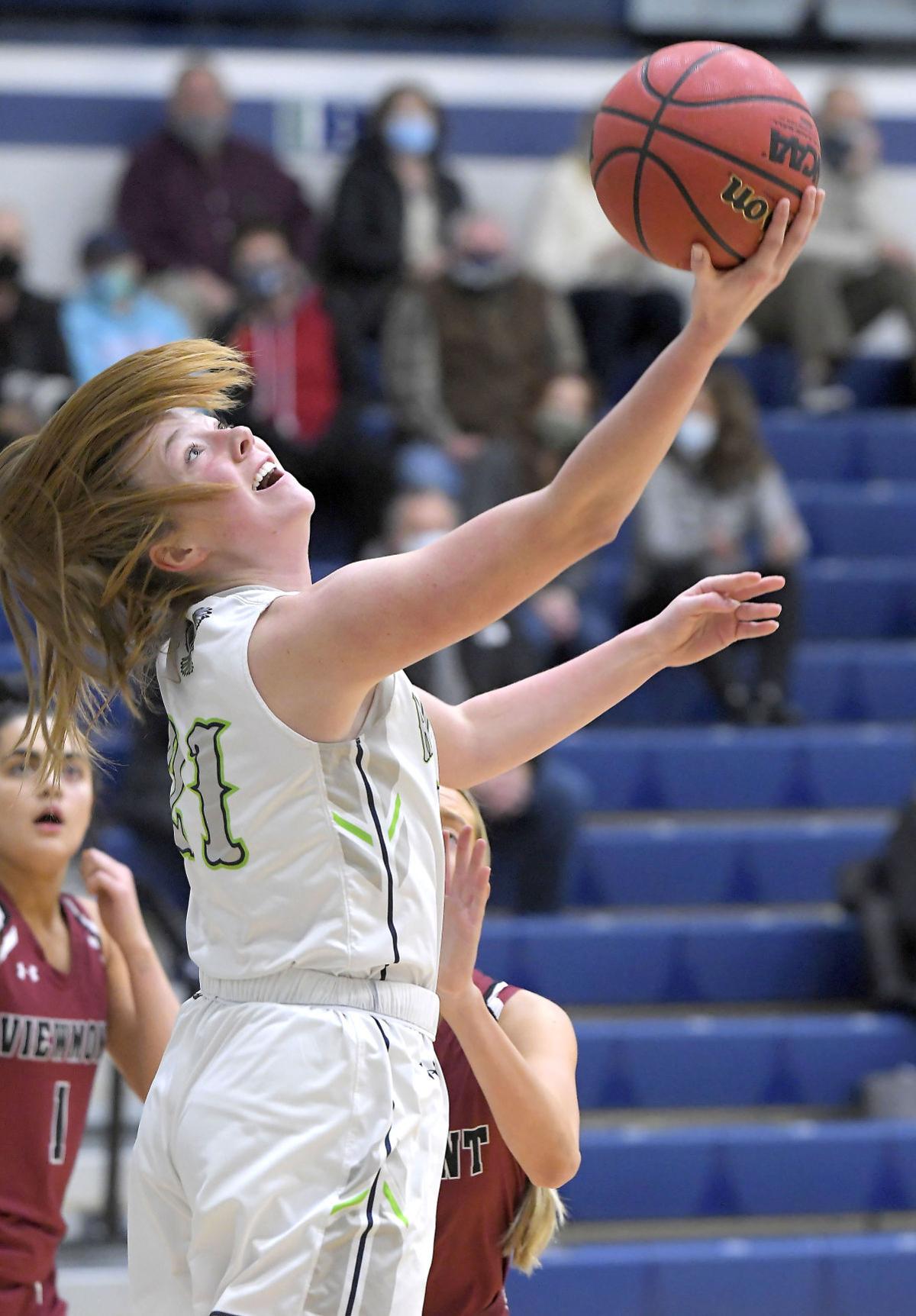 Ridgeline’s Sarah Litchford taks a shot against Viewmont on Thursday in Millville.

Ridgeline’s Sarah Litchford taks a shot against Viewmont on Thursday in Millville.

MILLVILLE — It’s beginning to become a theme for the Riverhawk girls basketball team.

Ridgeline gets a good start, has a bit of a lull to trail at halftime and comes roaring back to win in the second half. In the process, guard Haley Anderson scores a lot of points.

Such was the case Thursday night when the Riverhawks hosted 5A Viewmont. Ridgeline more than doubled its offensive output from the first half in the third quarter and made plays down the stretch to beat the Vikings, 50-45.

Oh, and Anderson broke her own school record for points in a game with 33. The senior set the mark just a little higher three weeks after breaking the record back on Dec. 17, against Morgan when she had 32 points.

“I didn’t know last time it was a school record,” Anderson said. “I looked up at the scoreboard tonight (at the end).”

“Haley is hitting a percentage of shots because she is taking the right shots,” Jenks said. “It shows her maturity, her leadership and her trust in her teammates. She is willing to make an extra pass, because she knows it’s going to come back to her. She is a competitor and a team player. She is being a little terror right now.”

While Anderson made play after play to keep Ridgeline (7-3) in the game, her Riverhawk teammates came up big when needed. Following a four-point play by Anderson — she also had a pair of three-point plays — Ridgeline got huge buckets by Sarah Litchford and Macie Brown down the stretch.

“My team has been getting me the ball, so I have to give it all to them because they are helping me get my shots,” Anderson said. “We play really good together and share the ball. ... We all stepped up in the fourth quarter and everyone hit big shots.”

“I’ve shot so many free throws throughout my life that it’s just muscle memory at this point,” Anderson said. “It’s just another shot that I take.”

It was the fifth straight win for the Riverhawks.

“She (Damuni) is a great point guard and has been getting me a lot of shots,” Anderson said. “It’s been awesome.”

The Vikings (7-5) were led by Emma Mulitalo with 12 points. Lauren Weir chipped in 11 points.

Ridgeline scored the first five points to start the game and held a 9-7 lead after the first quarter. Anderson had eight points.

Mulitalo hit a trio of 3-point shots, and Viewmont made four shots from beyond the arc in the second quarter. The Vikings took a 24-16 lead into the break.

“We were playing good defense, but then we were not communicating on the screens and they (Vikings) started knocking down threes,” Jenks said. “We’ve got to get better at that.”

After falling behind by 10 points early in the third, Anderson hit back-to-back treys off passes from Damuni to spark the hosts. A few minutes later Ridgeline was reeling off nine unanswered points when Litchford scored off a pass from Anderson, Damuni made two free throws and Anderson scored five points. Anderson outscored the Vikings by herself in the third quarter, 11-9. The game was tied at 33-33 to start the fourth quarter.

“I think we get really amped up in the first half, then go back into the locker room and remember how we play together,” Anderson said. “There were just a few things we needed to tweak.”

It was tied at 40-40 with 3:25 to play. The four-point play by Anderson put Ridgeline ahead for good.

“We had a number of girls that made the right cuts, the right reads and the right passes,” Jenks said. “... I love how this team responds when we make adjustments. It’s awesome.”

In other girls games that involved valley teams Thursday night, two emerged victorious and one suffered a road loss. Logan took care of 5A Bountiful at home, 54-48, while Sky View won at 3A Morgan, 76-59. Mountain Crest fell at 3A Grantsville, 62-36.

The Bobcats (8-2) trailed the Trojans (4-5) at halftime, 41-38. Sky View outscored Morgan by seven in the third and really put the clamps on the hosts in the fourth to win by double figures.

“We made some defensive adjustments at halftime and in the second half we were able to disrupt Morgan’s flow,” SV head coach Vanessa Hall said. “We were proud of the way our girls fought back from a halftime deficit to get a great team win against a quality opponent.”

“Morgan is a tough team that is well coached,” Hall said. “Tonight was a battle and that is what you want heading into region. Our shots were falling tonight and offensively we played well.”

The Mustangs (5-6) were outscored in every quarter by the Cowboys (9-2) and struggled to hit shots from long distance, going 2 of 17. Mountain Crest had eight players score, led by Sadie Coggins with 14.

“We did some great things and some not so great,” MC head coach Megan Smith said. “We couldn’t hit any shots tonight. Grantsville is always a good team. They have a great program, and they did really well tonight. We have to do better.”

There were two games north of the border Thursday in Franklin County as Preston completed a season sweep of Blackfoot, 72-61, and West Side did the same against Firth with a 43-37 victory.

The Indians (7-3) outscored the Broncos (7-4) in every quarter, building a 31-26 lead by the break. Preston made enough free throws to hold off several late charges by Blackfoot, who made eight 3-pointers in the game. Blackfoot came into the game fresh off a big win against the second ranked 5A team in the state earlier this week.

“It was a good, solid win,” Preston head coach Tyler Jones said. “I thought our defense was solid. We were able to get some baskets and transition and hit enough free throws down the stretch.”

The Indians made 22 of 29 foul shots in the final period and was 30 of 47 from the free throw line for the game.

Cole Harris led a trio of Indians in double-digit scoring with 19 points. Gabe Hammons netted 17, while Treyger Shumway had 10, eight in the final quarter. Brecker Knapp led the Tribe with 12 rebounds and scored eight points.

At Dayton, the Pirates (6-2) got off to a strong start with 16 points in the opening quarter, but could muster just five in the second against the Cougars (7-3). The second half was very similar.

“It was a good team win,” WS head coach Tyler Brown said. “It’s always good to get a team win against a team like Firth. We hit some big free throws down the stretch to get the win.”