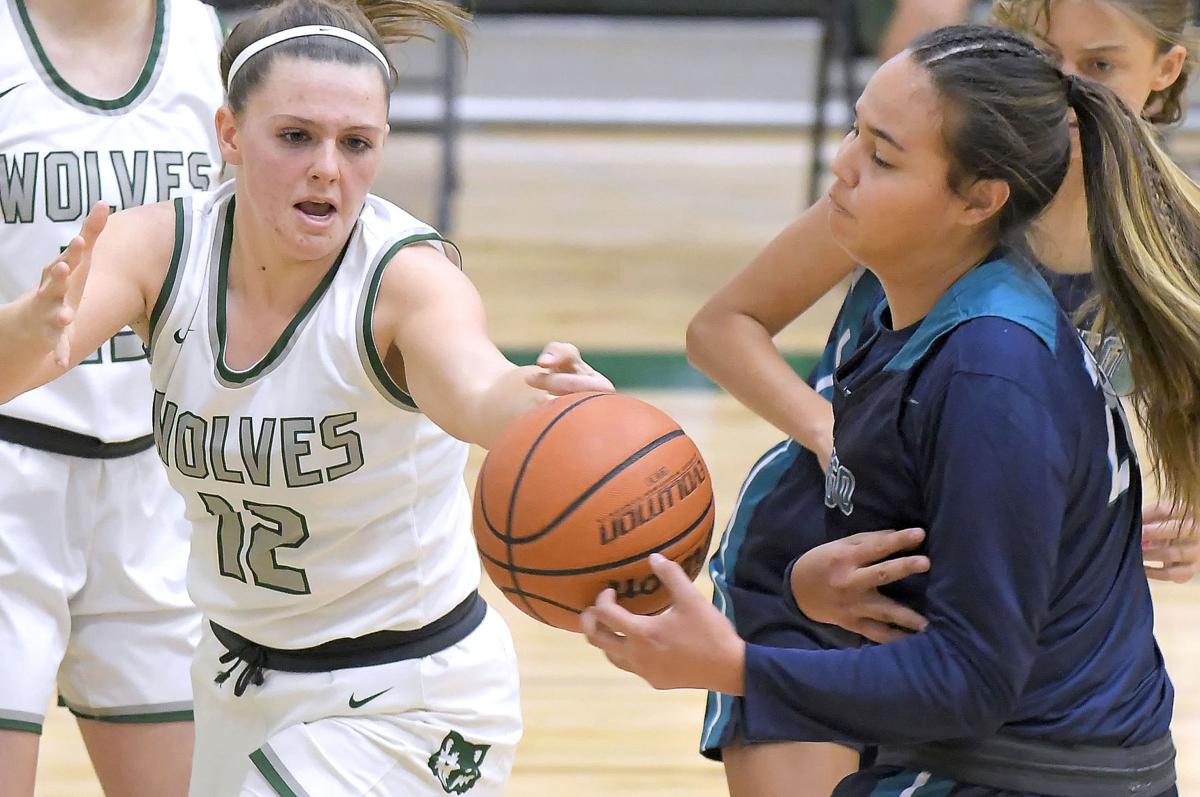 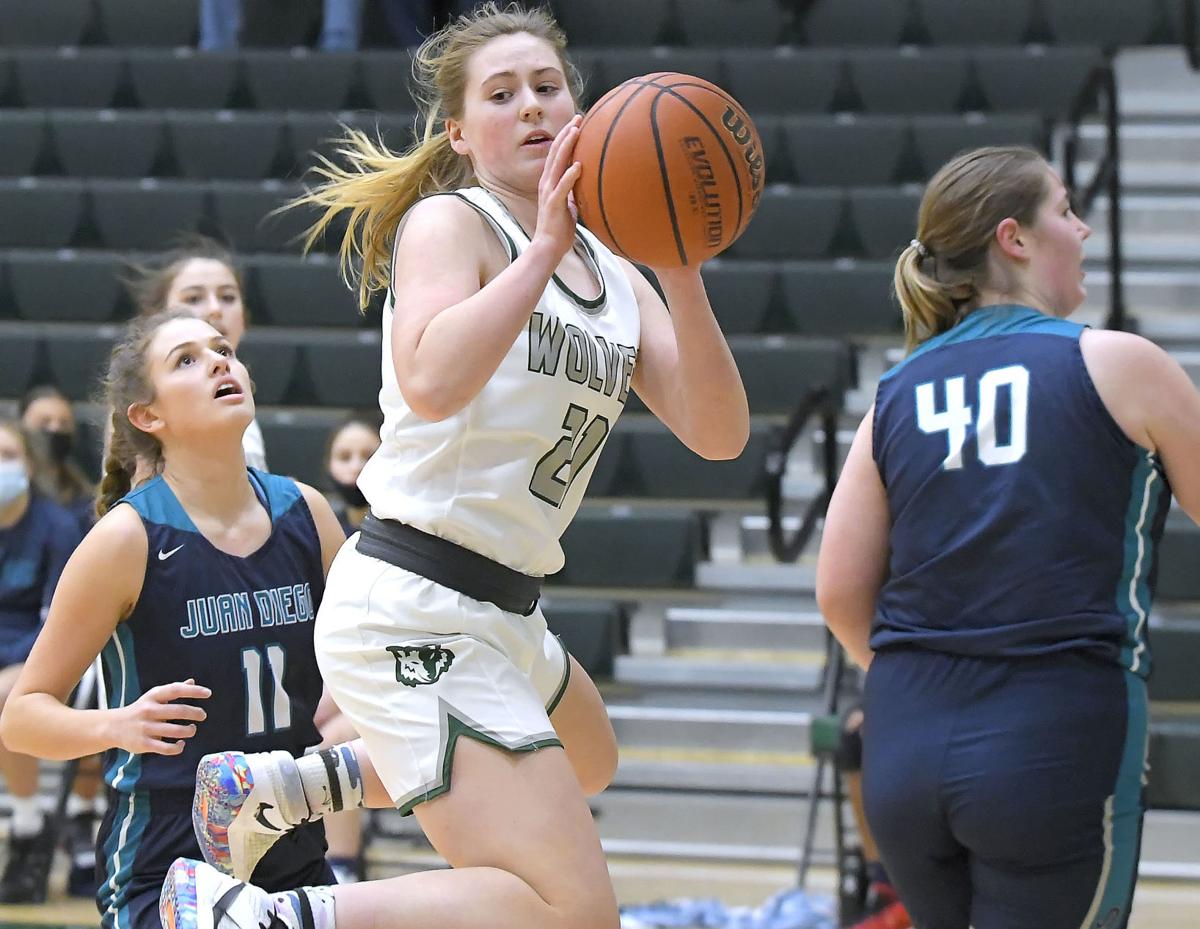 NORTH LOGAN — It’s one thing to preach playing as a team and sharing the ball, but to actually see it happen brings a smile to any coaches’ face.

Such was the case Wednesday afternoon at Green Canyon.

The Wolves used a balanced attack against visiting Juan Diego and were never really threatened in a girls basketball game. Ten girls scored as Green Canyon took a lopsided win, 57-26, against the Soaring Eagle.

“This game proved we can shoot and we can pass,” said Landree Spackman, who led the Wolves with 14 points, six rebounds and four assists. “... I think we can be good because we really don’t care who scores. Honestly, I really think we are a good team.”

“These girls are hustlers,” GC head coach Alexis Bird said. “Rebounding has been an emphasis in practices and games. We believe if we control the boards both offensively and defensively, it’s going to give us a good chance to win the ball game. We knew coming in that they (Soaring Eagle) wanted to be physical and rebound. So, we knew we would have to keep them off the boards, and the girls really rose to the occasion.”

“That was a very good team win,” Bird said. “... The girls did a really great job of adapting to what was thrown at them. They are so unselfish. They pass the ball well. They really don’t care who scores, as long as it’s Green Canyon.”

Joining Spackman in double-figure scoring was Maren McKenna with 11 points. McKenna also grabbed a game-best 10 rebounds for a double-double and had four assists. Plus, she dealt with a bloody nose after getting hit in the face with the ball.

“They work so hard for each other and when someone goes down, they work even harder,” Bird said.

Sarah Blau had nine points, five rebounds and three steals for the Wolves, while Brooklyn Heap came off the bench to grab six rebounds and come up with three steals. Jayden Beach had seven rebounds. It really was a team effort.

“We really are all unselfish and don’t care who scores,” Spackman said. “We just love passing it and setting our teammates up for success. ... We are really good rebounders.”

Kira Rhay came off to lead the Soaring Eagle with nine points.

After three lead changes to begin the game, the Wolves used an 8-0 run to surge in front. Blau and Madi Peterson each hit 3-pointers. Green Canyon took a 13-8 lead into the second quarter.

Juan Diego showed some life to start the second period, scoring five quick points to knot up the game. However, it was all Wolves after that.

A free throw by McKenna and a 3-pointer by Spackman sparked a 12-0 run by the hosts. A rebound bucket by Beach gave Green Canyon a 25-13 lead as the Soaring Eagle went more than six minutes without scoring. The Wolves were never really threatened from there.

A 3-pointer just before halftime by Peterson gave Green Canyon a 28-14 lead at the break.

Spackman had two treys and sank all four of her foul shots in the third quarter. Her second trey came just before the third ended, giving the Wolves a 42-22 lead going to the fourth.

There was a scary moment for Green Canyon just as the third ended. Peterson collapsed on her way to the bench. She eventually walked off the court with some help.

“She (Peterson) is okay,” Bird said. “It was a scary moment, but the team used that to fire them up because they are a family. They care about each other.”

The Wolves scored the first 11 points of the fourth and just kept rolling as bench players got in.

“Our bench came in and did a good job of executing at the end,” Bird said. “That’s always fun to see. We tell them they never know when their number is going to be called.”

Three other teams from the valley were in action Wednesday with two picking up wins. Ridgeline rallied to beat 2A North Summit at Coalville, 54-47. West Side also came back from a deficit to win at Declo, 61-54. Mountain Crest lost at home to 6A Jordan, 56-50.

The Riverhawks (5-3) could muster just four points in the first quarter, but quickly changed that. After trailing 8-4 after the first eight minutes, Ridgeline took a 20-19 lead into halftime. The Riverhawks outscored the Braves (5-4) in both quarters in the second half.

“North Summit is a great team,” Ridgeline head coach Ainsli Jenks said. “It was a battle the whole game. Happy with my girls for playing hard and responding to adjustments we had to make.”

Like the Riverhawks, West Side was doubled up in the first quarter, 14-7. However, the Pirates held a 26-25 lead at the break and kept adding to their advantage.

Mountain Crest (5-4) dug a hole in the first half, trailing 34-19. The Mustangs won both quarters in the second half against the Beetdiggers (5-2), but it wasn’t enough.

“Jordan is a physical team with some great players,” MC head coach Megan Smith said. “When we play physical teams, I think it takes us a minute to get the feel for the game. It wasn’t until the second half that we started to really get the feel and step up. We got some great defensive stops and had many opportunities to score but tonight we just struggled with our shooting.”