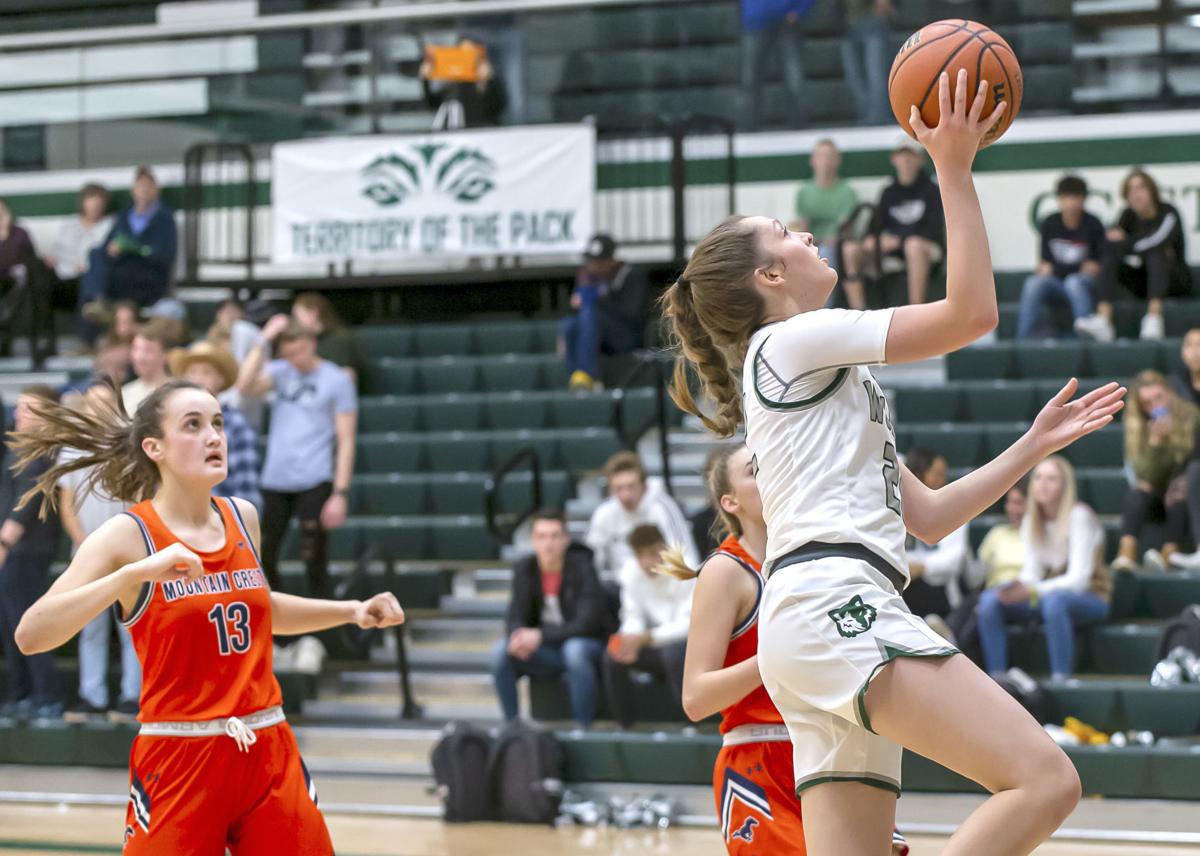 Green Canton’s Shante’ Falslev drives in for a layup in her team’s win over Mountain Crest on Tuesday night in North Logan. 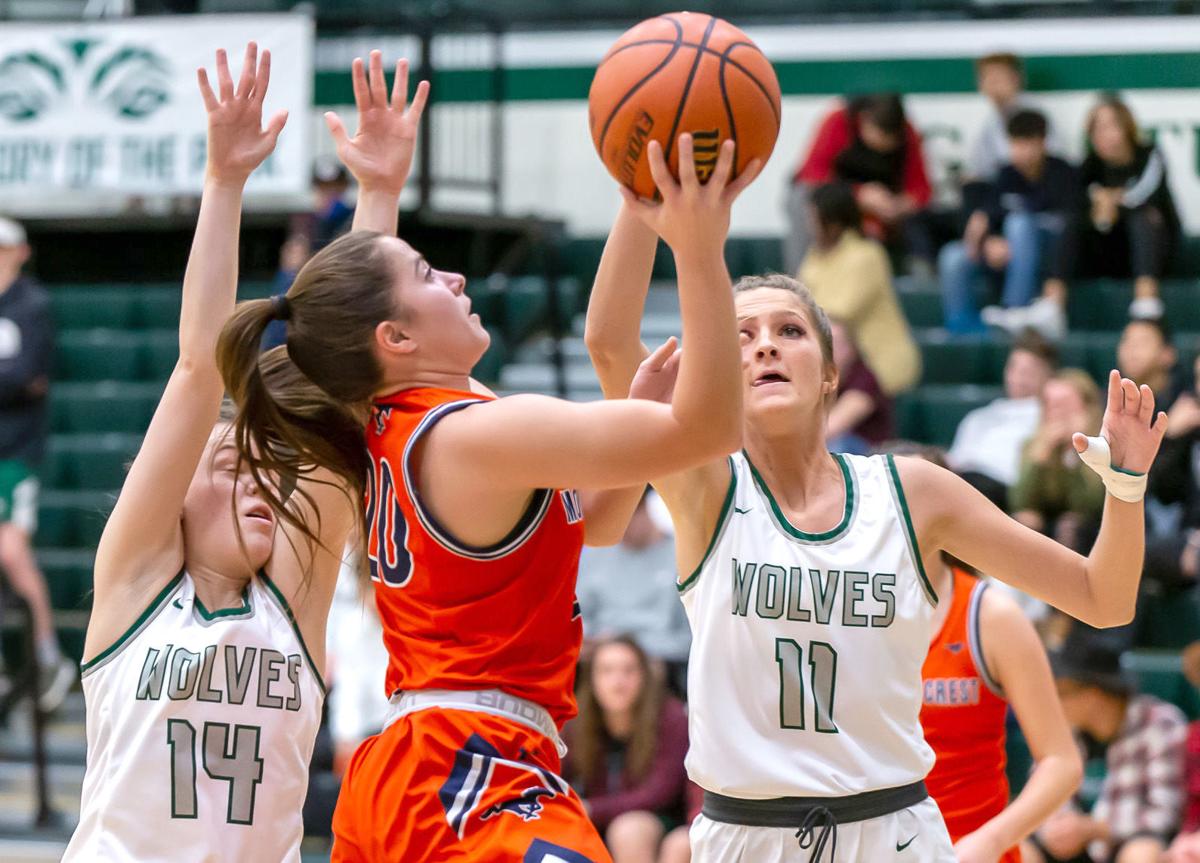 Mountain Crest’s Birkli Barrera (20) goes up for a shot as Green Canyon’s Jordyn Thompson (14) and Brooke Watkins (11) defend on Tuesday in North Logan.

Green Canton’s Shante’ Falslev drives in for a layup in her team’s win over Mountain Crest on Tuesday night in North Logan.

Mountain Crest’s Birkli Barrera (20) goes up for a shot as Green Canyon’s Jordyn Thompson (14) and Brooke Watkins (11) defend on Tuesday in North Logan.

Mountain Crest scored the first two baskets of the game and held an 11-7 lead five minutes into the contest. One Green Canyon 9-0 run later, however, and the Mustangs (6-13, 0-7 Region 11) lost the lead for good.

Jordyn Thompson featured heavily in that early rally by the Wolves (14-4, 5-2) as she scored eight straight points in a two-minute span on a pair of 3-pointers and a pair of free throws.

The Mustangs certainly didn’t lay down after giving up two first-quarter leads or after being down five points twice in the second quarter. Instead, they got aggressive, drawing six fouls and taking 10 trips to the free throw line and making eight of those attempts.

That made up for the fact that Green Canyon outrebounded (7-3) and outshot (44.4 percent to 37.5 percent) Mountain Crest in the second quarter. In the final seconds of the half, Sadie Coggins laid in a fastbreak shot to cut GC’s halftime lead to two points 27-25.

“Mountain Crest is a better team than their record says,” GC head coach Alexis Bird said. “I think they’re very talented, very well-coached and the girls knew that coming in.”

With the MC rally potentially making it anyone’s game, the Wolves trotted out of the locker room for the second half and made it their game. On GC’s first offensive possession, Shante’ Falslev drained a 3-pointer to kick the lead up to five.

Mountain Crest struggled for a few minutes, unwilling to submit, but Green Canyon clamped down on the MC offense and carved out another 9-0 run , which allowed for an 18-6 overall advantage in the third quarter.

Dominating the third quarter was something of a key area for the Wolves, who have had a couple of games where it was a weakness, specifically in their last outing against the Mustangs (outscored 15-6 in their Jan. 14 matchup).

With that game-changing quarter under their belt, Green Canyon had one last hurdle to cross. Entering the fourth quarter, the Wolves had a 14-point lead. However, the Mustangs scored the first eight points of the final quarter, cutting their deficit to 45-39 with 5:23 to play and prompting Bird to take a timeout. In the quick huddle and the possessions immediately after, it was about staying calm and not scoreboard watching.

“We just stayed calm,” McKenna said. “We didn’t even focus on the score. I didn’t even know what the score was. Today in our pregame talk, we talked about not even looking at the scoreboard, and I think that helped.”

Thanks to Green Canyon’s calm demeanor and focus, the lead quickly grew from single digits back into the double-digit variety.

Defense certainly flipped the script from last Thursday’s game to Tuesday. The Wolves only scored six more points than they did last time out, but allowed 17 fewer points from their foe. There were some improvements on the offensive end, though, attested to by the game’s leading scorer, Falslev, who had 13 points.

“I feel like we played really well together,” Falslev said. “... Our offense really flowed well.

For one, ball movement flowed and points were plentiful off passes from Kinley Falslev and Kennedy Eskelson. The two combined for 12 of GC’s 15 assists in the game, with Eskelson leading the way with a game-high eight.

McKenna joined Shante’ Falslev as one of four GC players to reach double-figure scoring. McKenna had 11 points, tied with Thompson’s total, and Kinley had 10 points. McKenna Crane led the Wolves with eight rebounds, four on the offensive end.

For Mountain Crest, Teagan Hall and Coggins both had eight points to lead the way, followed by Havyn Brown, Lexie Coggins and Ella Douglass, who all had six. Douglass also had nine rebounds and a pair of blocks.

Mountain Crest, now on a seven-game losing streak and still winless in region play, remains a team that can and should pull off a win one of these games, but are running out of chances.

“I don’t know that there’s anything more to say,” MC head coach Megan Smith said. “It’s kind of the same thing. We just have to figure out a way to finish.”

Despite repeated letdowns on the court and emotionally, the new playoff format — which allows every team at least one postseason game — provides something for the Mustang players to look forward to, even if one might consider the season long since lost.

But above all, Smith said she hopes the players buy into the improvements the team has made and can continue to improve.

“It was a great win for us. Logan is a tough team,” SV head coach Vanessa Hall said.

The two sides played to a halftime tie 19-19, then Sky View opened things up a bit on their end with a 14-8 advantage in the third.

“We played them tight in the first half, and then in the third quarter we were able to run the floor and get some buckets in transition,” Hall said. “I though Macy Hellstern saw the floor well tonight, and Gracie Rigby did a great job of getting out and transitioning.”

In the fourth quarter, the Grizzlies did their best to rally and were led in their efforts by Amber Kartchner. The junior scored 15 of her game-high 26 in the finals quarter alone. However, Logan only outscored Sky View by one point during the final eight minutes of play.

Ridgeline (15-4, 7-0) went from playing the second-best team in Region 11, Green Canyon, to the second-worst team in the standings in Bear River (6-12, 1-6). But Ainsli Jenks wasn’t concerned with where her team’s opponent was in standings, saying “every night is a battle in our region.”

Her Riverhawks played like they believe that manta and unleashed their talent on Bear River, blowing them away in the first three quarters by taking a 52-26 lead before letting off the gas and cruising to the end.

“Bear River played hard the entire game.,” Jenks said. “I’m proud of my girls for showing up ready to earn it. I thought we shared the ball well again tonight.”

Emma Anderson had 18 points to lead the way for the Riverhawks. Haley Anderson added 15 points, and Brayli Jenks had 14 to round out double-figure scorers.

For the third time this season, West Side blew out Malad — this time in a 2A Fifth District Tournament play-in game. The Pirates outpointed the Dragons (0-20) by 22 points in each of their regular season games.

West Side pounced on Malad early, taking a 21-2 lead into the second quarter. The Pirates limited the visitors to 16 points in the first three quarters and led by 29 points heading into the final quarter.

Kajsia Fuller netted nine of her game-high 17 points in the third quarter for the Pirates, who will square off against top-seeded and two-time defending 2A state champion Soda Springs (19-2) on Thursday night. Madi Barzee and Jocie Phillips chipped in with eight points apiece for West Side, which had nine different players contribute to the final scoring tally.