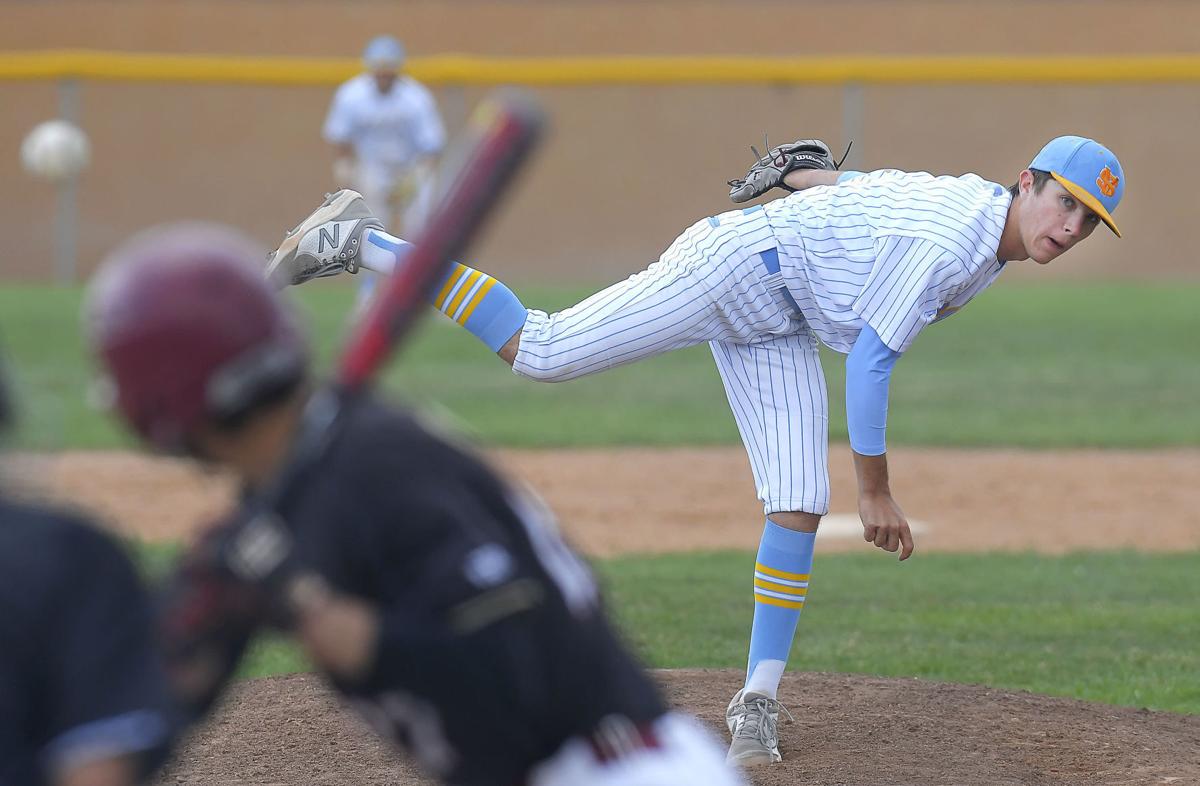 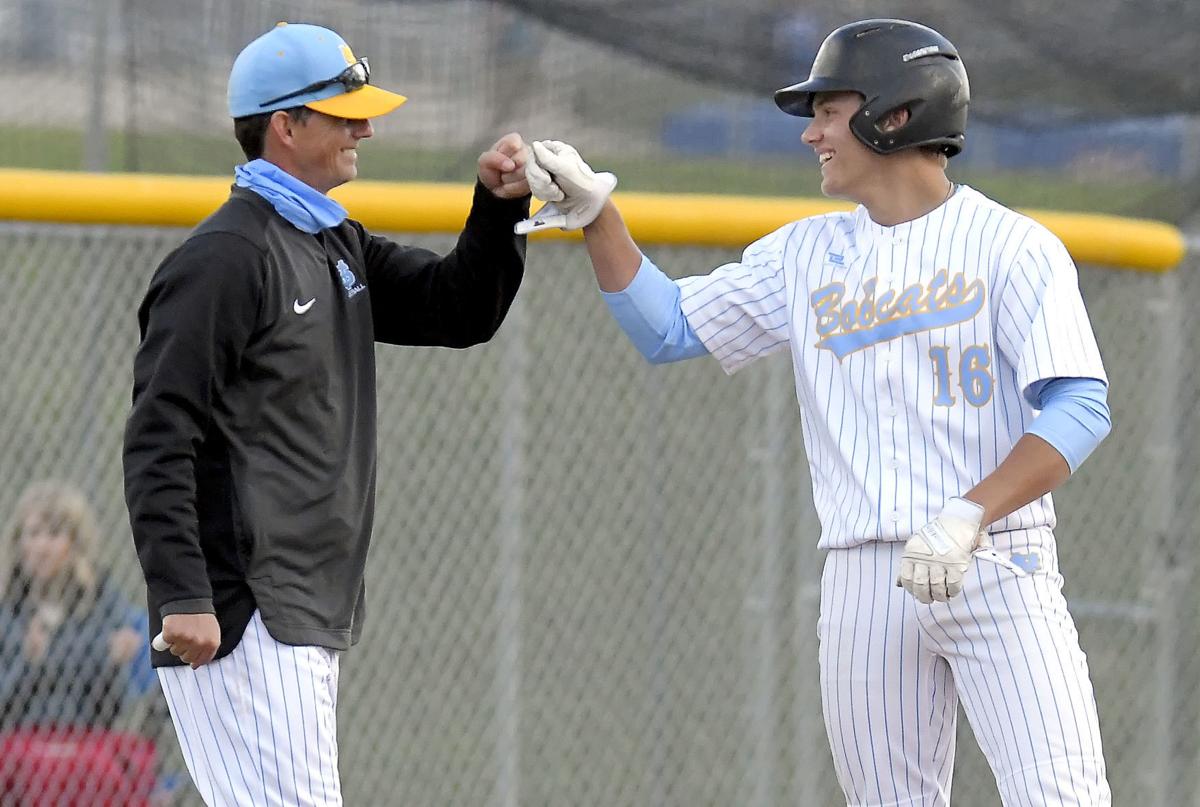 Sky View coach Todd Phillips celebrates with Tucker Murdock after he hit a 3 RBI triple against Logan on Monday in Smithfield.

Sky View coach Todd Phillips celebrates with Tucker Murdock after he hit a 3 RBI triple against Logan on Monday in Smithfield.

SMITHFIELD — It was the fourth meeting in seven days.

But there was much more on the line Tuesday when Sky View and Logan squared off on the diamond. It was the first round of the 4A Baseball State Championships. The winner advances with the loser having the 2021 season come to an end.

The Bobcats used timely hitting, efficient pitching and took advantage of errors by the Grizzlies on a windy and sometimes sunny afternoon. Sky View will be moving on, while Logan says good-bye to this season as the Bobcats shutout their visitors, 9-0.

“I felt like we were a little tight in the first inning,” SV head coach Todd Phillips said. “You could tell there were nerves. ... Our short game was very key for us today, getting the bunts down and putting the pressure on them defensively.”

“To be honest, I wasn’t too happy on Saturday to see we had a region on region matchup,” Phillips said. “You just have to go take care of business.”

The hosts got a solid outing from pitcher Cole Lundahl, who went the distance. He allowed just three hits by Logan, while striking out three and walking three. He hit two batters, but each time the defense behind him was solid when the Grizzlies got runners on base.

“I felt like everything was really working for me today,” Lundahl said. “My offspeed and curveball were finding the strike zone.”

Sky View had just one error in the game and like the walks and hit batters, didn’t come back to haunt the Bobcats.

“The offense backing me up really helped,” Lundahl said. “... It felt nice to come back and win this game, because we lost to these guys (Grizzlies) last week on Senior Night.”

Stetsen Karren nearly had half of the Bobcat hits with three. He also drew a walk, scored three runs and had an RBI.

“He has been key out of that six hole,” Phillips said of Karren. “He has done his job moving guys and putting the pressure on the defense. He has been great.”

The only extra-base hit of the day came in the bottom of the sixth. Tucker Murdock came on to pinch hit and delivered. With the bases loaded, he cleared them with a three-run triple that reached the fence in the gap in left-center.

“Tucker has been due in a varsity game,” Phillips said. “I liked the matchup and made the move to see what would happen.”

Two errors helped the Bobcats get on the scoreboard in the second inning. Karren singled and eventually scored to give the hosts a 1-0 lead.

Lundahl needed just 14 pitches to get out of the third.

In the bottom of the third, Sky View put five runs on the board. Tanner Martin drew a walk to begin the frame, followed by bunt singles by Cole Watterson and Tate Bagley to load the bags with no outs. A ground ball by Lundahl scored a run and kept the bases juiced because of an error. Karren had an RBI single, and another run came home on a bad throw. With the bases loaded again, Alex Carling was hit by a pitch to bring in a run. The fifth run of the inning came when Karren was waved home because of a balk, giving Sky View a 6-0 lead.

The Murdock triple in the sixth capped the scoring.

“I feel if we can play defense, our pitchers will keep us in there enough,” Phillips said. “We just need to go get two, three, four runs, get some key hits and play smart.”

Next up for the Bobcats is a date with Pine View in St. George, starting on Thursday. The Panthers are the No. 3 seed, according to the RPI. In the second round, a three-game series will be played with the winner advancing to the next week to play at Salt Lake Community College.

“It will be nice to have a two out of three series,” Phillips said. “Our region sets us up for that doing the three-game sets in one week. We have to develop three pitchers. I think that gives us a little bit of an advantage as other regions play each other twice.”

“We want to make a good run,” Lundahl said. “It took us a while to get started. I feel like we have good momentum going down there (St. George).”

Preston lived to play another day with a 3-2 win against Century in the district tournament. Now the Indians (11-14) will travel back to Pocatello and must beat the Gate City Indians twice to make it state, beginning on Tuesday.

After Century scored a run in the top of the seventh to tie the game at 2-2, Preston did not blink in the bottom of the frame.

With one out, Damon Winn tripled to right field. The very next batter ended the game with the game-winning single. Braden Hess brought Winn home with a hit.

Both teams had two errors in the contest. Preston outhit Century, 6-4. Winn had two of the base knocks for the Indians. Ashton Madsen had a double and scored a run.

Tate Greene nearly went the distance on the mound, leaving in the seventh with one out. He struck out seven and walked one. Justin Inglet finished the game, striking out one.