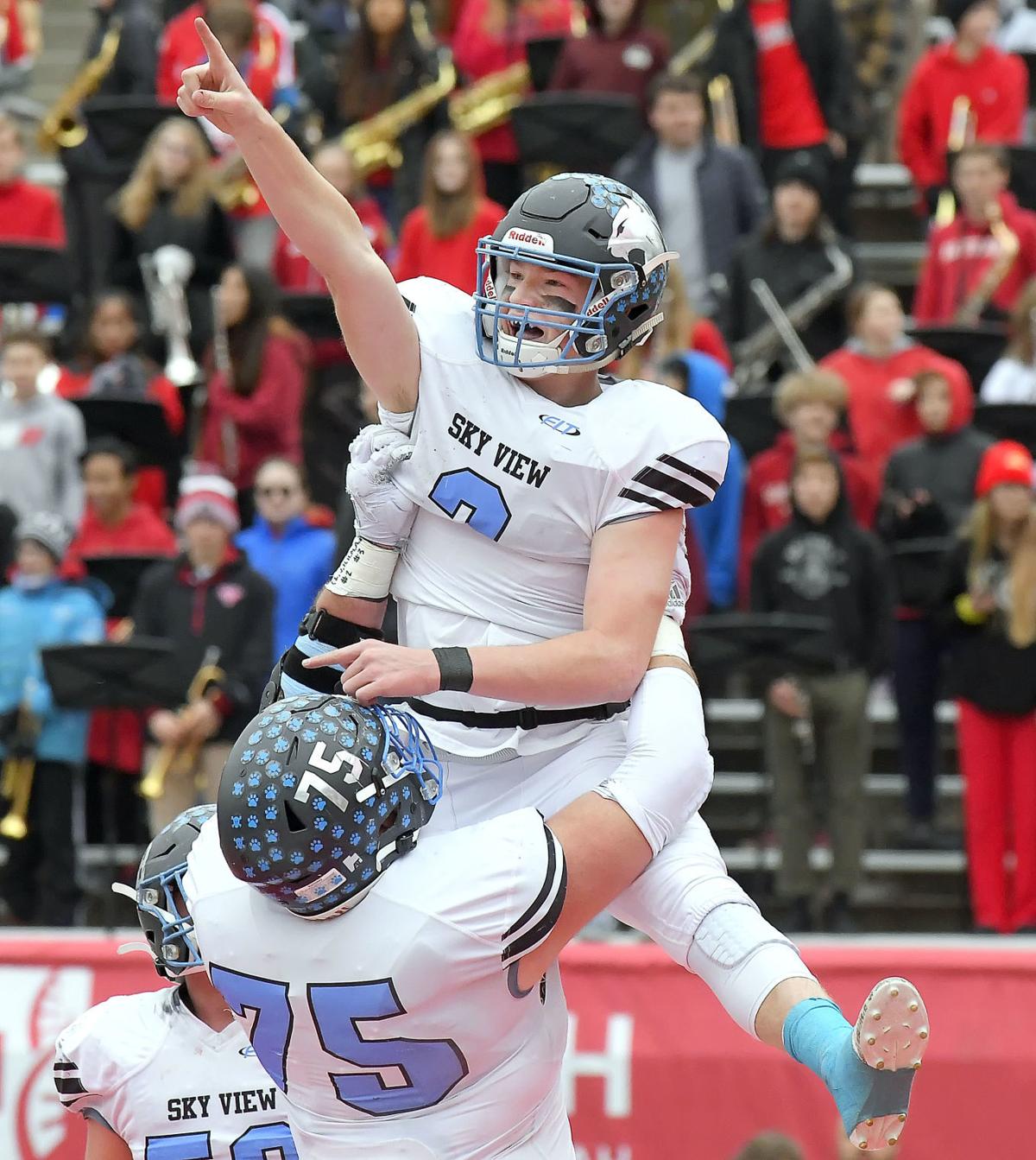 Sky View quarterback Kason Carlsen celebrates with lineman Evan Hall after he scored a touchdown in the first quarter against Park City on Friday in Salt Lake City. To view more photos from the game, go to hjnews.com. 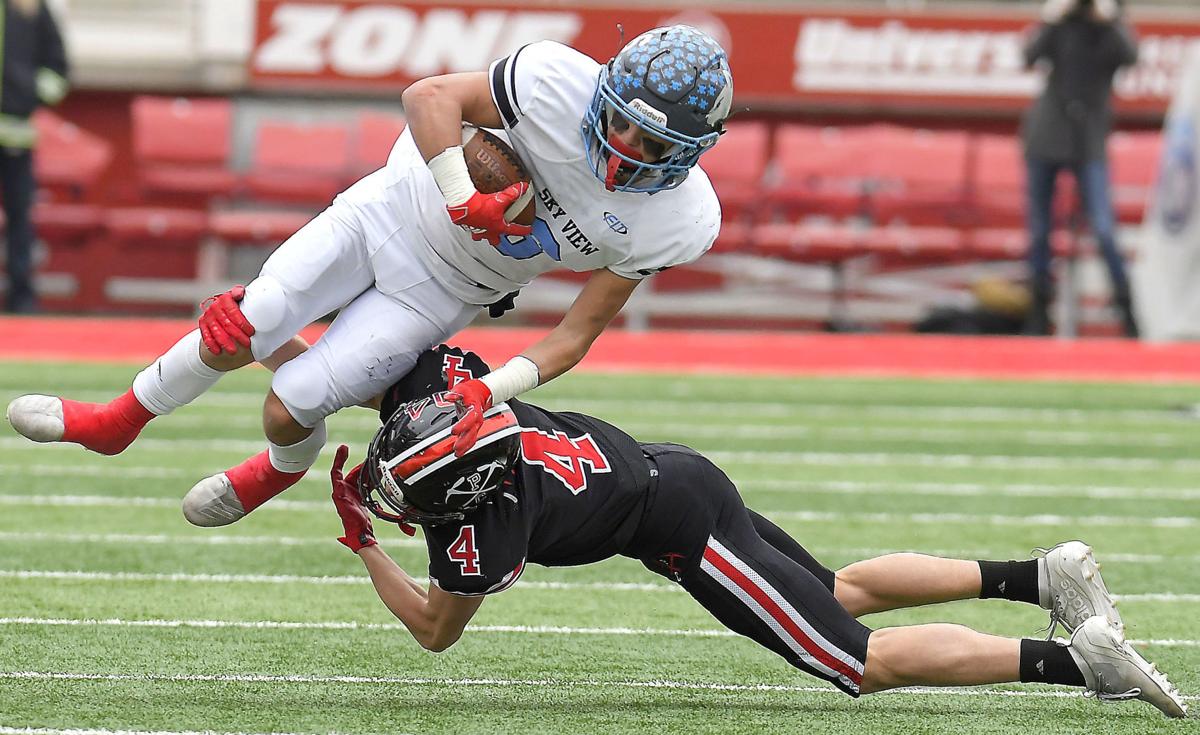 Sky View quarterback Kason Carlsen celebrates with lineman Evan Hall after he scored a touchdown in the first quarter against Park City on Friday in Salt Lake City. To view more photos from the game, go to hjnews.com.

SALT LAKE CITY — “It’s way better than I expected it to be. It wasn’t even about Park City. It was about all of us coming together. Every time we come together, chanting, we say ‘family.’ I’ve just never felt so close to a bunch of guys it’s just unbelievable.”

Such were the words of Sky View defensive back and wide receiver Scout Morris moments after his Bobcats won the first-ever football state championship for the Smithfield school, and with tears of joy drying on his face on Friday at Rice-Eccles Stadium. Behind him, the final score of Sky View 35, Park City 0, declared the true dominance of Morris and his band of brothers.

Junior quarterback Kason Carlsen did much of the early work, scoring all three touchdowns — two from 1 yard out and the third from 3 yards out. He finished the opening half with 61 rushing yards while going 13 for 19 on his passes for an additional 139 yards.

“If you’re able to get up on a team 21-0, that’s really quite a blow in my mind to the other team,” Carlsen said. “So to be able to come out and execute, be able to punch them in the mouth too, that just really sets the tone.”

Sky View eventually slowed down after the initial burst, but Park City rarely proved capable of stopping the Bobcats, who finished with 406 total yards of offense. Carlsen accounted for 293 of that with 186 through the air and 107 on the ground with his three rushing TDs.

Mason Falslev starred in the role of both wide receiver and running back. He torched the defense for 86 yards of his own on 14 carries (6.1 yards per rush) and two touchdowns. The senior two-sport star also led all players in receiving with five catches for 57 yards.

As much as Sky View’s offense propelled the team to its fourth blowout victory in the playoffs — a 42.0 average margin of victory in four games — the defense excelled — as it has all season. Including Friday’s title-clinching win, Sky View shut out opponents in 20 of the last 24 quarters of play.

“You’ve got to credit the defense,” Carlsen said. “To be able to hold (Park City) to zero points, you hold a team to zero points your odds of winning are really good.”

Park City entered the game averaging 38.7 points and 432.4 yards per game. Leading rusher Dylan Bauer had more than 2,000 scrimmage yards to his name (1,881 rushing and 176 receiving) and 22 total touchdowns (20 rushing, 2 receiving). Bauer finished with 121 yards on 18 carries, but his efforts were entirely fruitless as the Miners only entered the red zone once, and were repelled thanks to a fourth-down interception by Falslev.

Sky View had three turnovers on the day. Falslev’s interception was the second such play by the defense. Earlier, Morris recorded his state-leading 10th interception of the season on a deep pass by Miners’ quarterback Jack Skidmore. On the previous drive, Thor Griffin blocked a punt that set up the Bobcats’ third touchdown of the first quarter.

In all, Park City managed just 179 net yards. Sky View had three tackles for loss/sacks, resulting in 26 yards lost. Hunter Larsen had two of those sacks. Traeson Martindale, who led all players with 12 tackles, recorded the other sack/TFL.

“They’ve been that way all year,” Howell said of his defense’s dominance. “That’s the story that they’ve basically lived all year. All they did is continue to play the way that they have and every time we’ve played a high-quality opponent, they’ve raised their game just a little bit and they did again today.”

The potential for revenge was a storyline in the game, even if cast aside in the wake of a familial bond. Last season, Park City ended Sky View’s bid for an undefeated season, downing the Bobcats in the quarterfinals, 15-14. Falslev missed much of the game win an injury, and Sky View missed a go-ahead field goal late.

That loss kept the Bobcats from a title for a second straight season despite regular season dominance and a second straight Region 12 title. After winning the Region 11 crown and three playoff games, Sky View had put together a 33-3 run across three seasons. The only thing missing in that dominating stretch was a win in the final week of the season. Something the 34th win finally brought.

“That means so much. It’s like the cherry on top,” Falslev said.

This Bobcat team didn’t emerge from the locker room in week one as a championship-caliber team. It changed and evolved into the crown jewel of the program’s recent dynasty.

“The evolution of our offense this year has just been unbelievable,” Howell said.

The impetus of Sky View’s offensive evolution came in game four of the season. Late in a 45-33 win over Madison (Idaho), then-starting quarterback Falslev took a hard hit on a run play while trying to drain the clock. He left the game with his arm in a sling and did not play the next week. That’s when Carlsen took over at quarterback. But rather than game manage as a reserve for a star, Carlsen wound up starring himself, leading a dynamic offense. When Falslev returned, his role became that of weapon and playmaker right alongside the new starting QB.

“When Mason got hurt we had a lot of people looking at their toes like ‘oh no, now what’” Howell said. “And I felt as confident as ever because I knew the type of kid that Kason Carlsen was.”

This title win means Sky View concurrently hold the boys’ soccer, boys’ basketball and football championships. Falslev led the SV boys’ basketball team to a state title in Cedar City in March with the soccer team becoming champs in May.