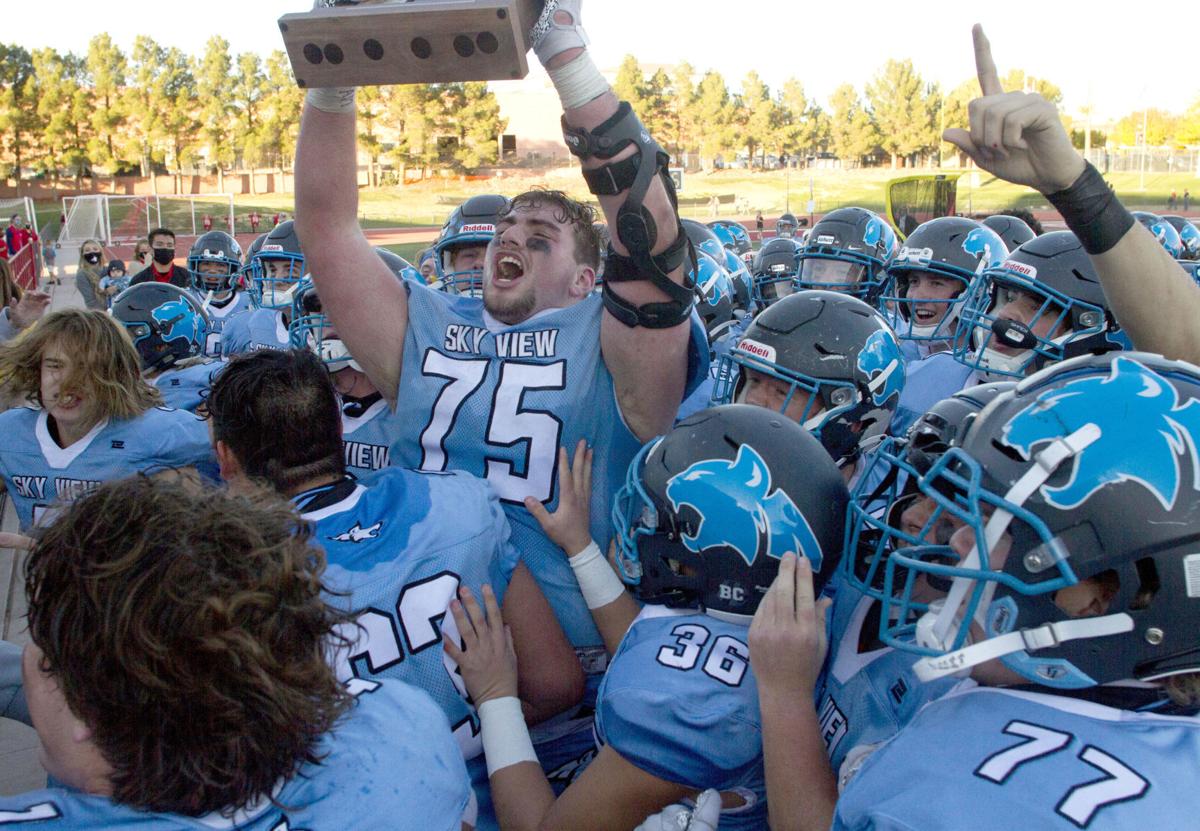 Sky View’s Evan Hall raises the trophy after his team held off Pine View 39-33 to cap off an undefeated season last Saturday in St. George. 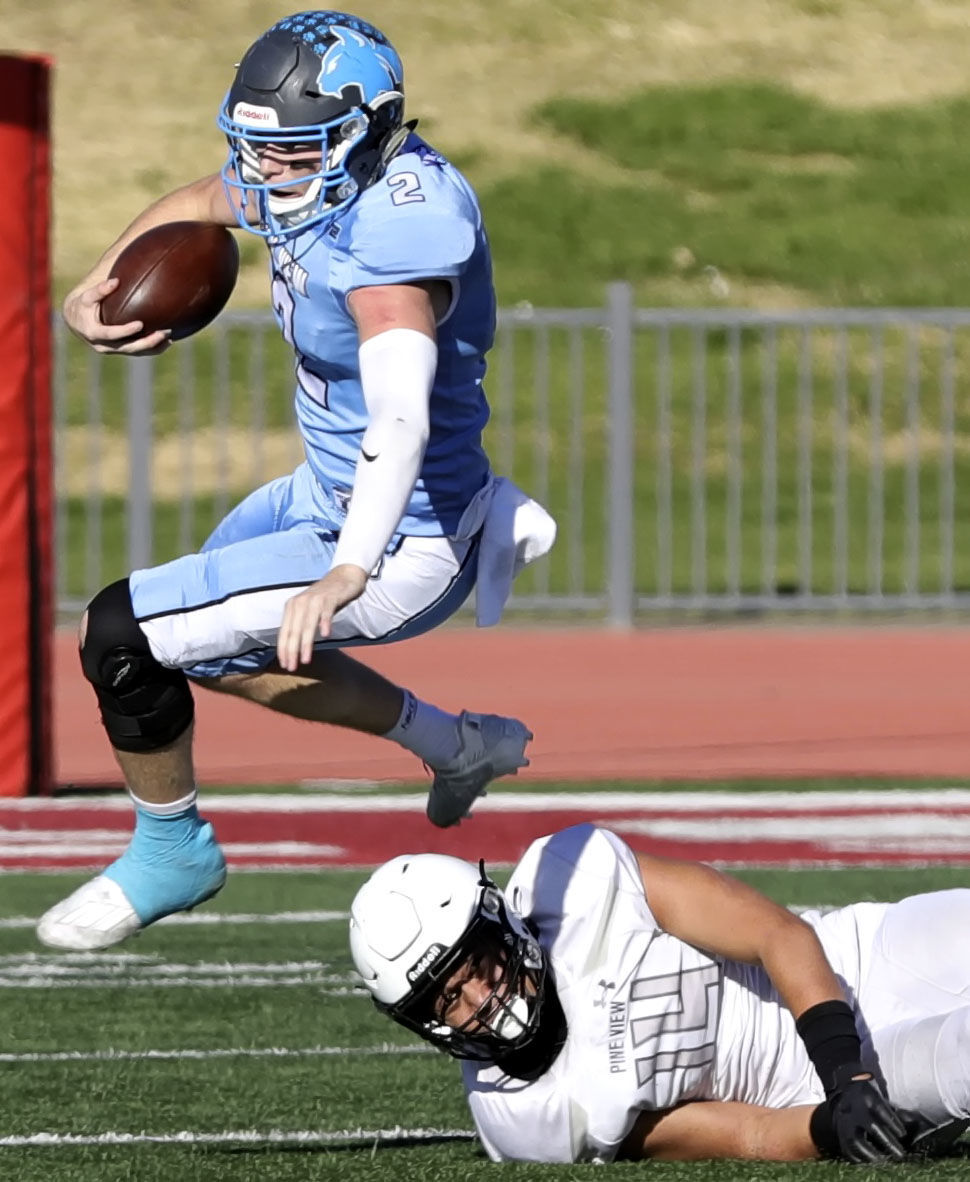 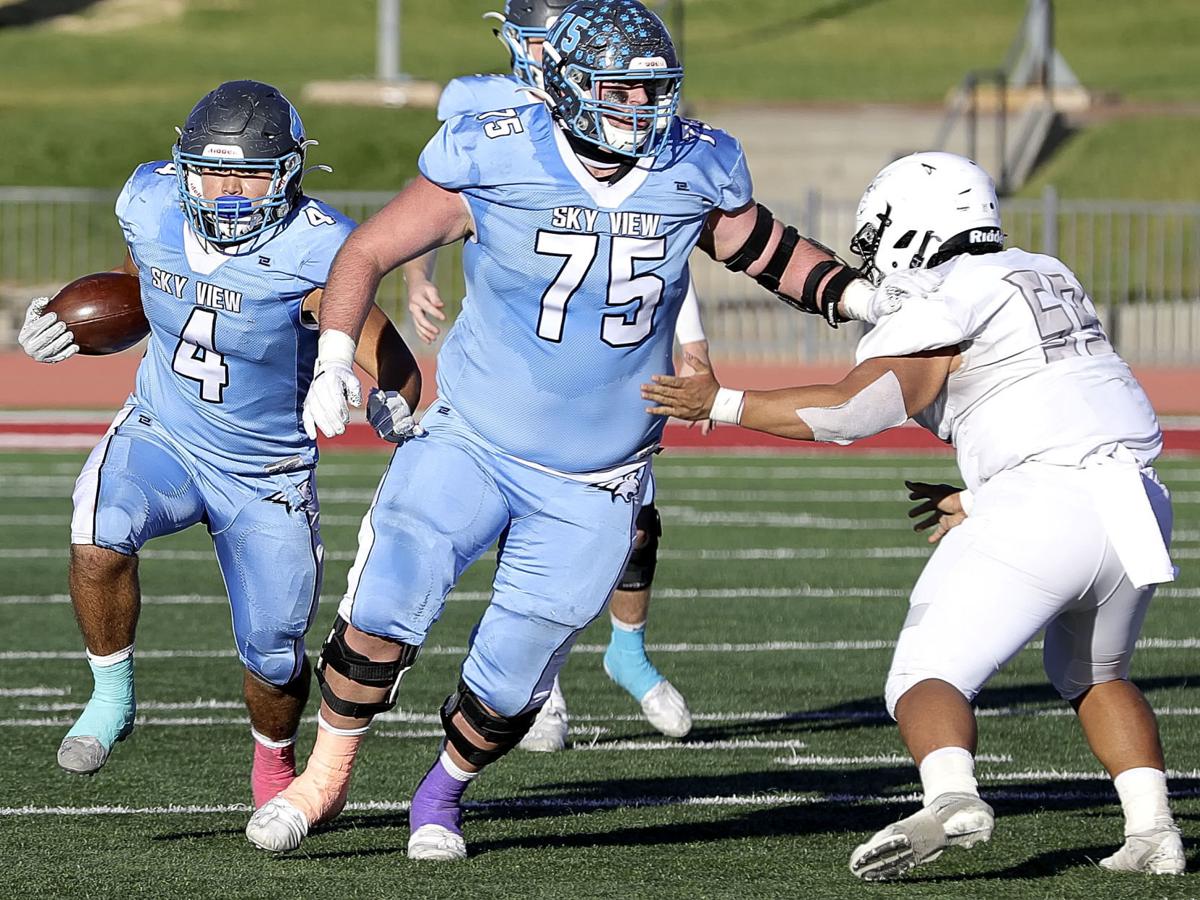 Sky View’s Evan Hall raises the trophy after his team held off Pine View 39-33 to cap off an undefeated season last Saturday in St. George.

ST. GEORGE — It is said that defense wins championships.

Sky View certainly has been solid on that side of the football all year and entered the 4A state title game allowing just 11.6 points a game. The Bobcats gave up almost triple that average against a high-octane Pine View offense Saturday afternoon that came into the contest averaging 41.6 points.

Despite the Panthers scoring 33 points at Trailblazer Stadium on the campus of Dixie State University, Sky View repeated as state champions with a 39-33 victory. The Bobcats (13-0) capped off their first perfect season in school history and have now won 25 straight games, which is tied for second best active streak in the Beehive State.

“It was very emotional to get it the second time, especially as a senior,” said Bobcat lineman Evan Hall, who accepted the trophy from SV principal Mike Monson and carried it to the edge of the stands to celebrate with fans. “I love these guys so much. They are going to be my family forever. There is no feeling like it. … It’s way sweeter the second time. 4A is ours and we came out and proved it.”

Every Bobcat interviewed called the second championship “sweeter” than the first. There were a variety of reasons, but this one was certainly much harder to attain. Last year Sky View blanked Park City, 35-0. Pine View (12-2) scored first, tied the game after falling behind and stayed close most of the contest. Some costly turnovers did the Panthers in.

“This is so awesome, different from last year just because it’s a different team and totally different circumstances,” SV head coach Christopher Howell said. “Last year we whooped them (Park City) pretty good and this year was a dogfight. I was so proud of how they won differently.”

There is no doubt it was a tight game throughout.

“They (Panthers) are a really good offense,” SV senior linebacker Hunter “Moose” Lewis said. “We are one of the better defenses in the state of Utah, and they put up 33 points. Nothing but respect for that offense, but we got the job done.”

While Pine View scored the most points the Bobcats have given up this season, the Panthers also dealt with what all Sky View opponents have this season — a hard-hitting defense that causes turnovers. The Bobcat D won the turnover battle Saturday, 4-1. Sky View came up with two interceptions and two fumbles. The defense also came up with a fourth-down stop in the second quarter and forced a fumble on another fourth-down play as the first half expired.

“I knew our kids had some dog in them today, and they found a way to grind it out,” Howell said. “... The defense was huge. One of the turnovers was in the red zone and we came up with that big fourth-down stop. Those were both huge and set up by our pressure.”

Lewis came up with the first turnover, picking off a pass in the first quarter. The pick came after a 60-yard pass by the Panthers.

“Turnovers were huge,” said Lewis, who led the Bobcats with nine tackles for the game.

Sky View took the lead, 13-6, with a scoring drive after the Lewis interception. Bobcat quarterback Kason Carlsen hit an open Titan Saxton for a 22-yard touchdown. Carlsen had zipped in a 22-yard TD strike to Trey Nyman for the first Bobcat score of the game.

With the game tied at 13-13 and Pine View driving, the Bobcat defense came up big again. Lewis had a tackle for loss on second and short. The Panthers then threw two incomplete passes, the second was broke up by Saxton on fourth down at the Bobcat 31-yard line.

“They (Panthers) are by far the best offense we have played,” Saxton said. “They have some studs. That McKenzie kid (wide receiver Dominque McKenzie) is a straight up animal. They were really tough to play against but Toph (Howell) had us ready and we pulled it out.”

Coming into the title game, Pine View quarterback Brayden Bunnell led all of 4A quarterbacks with 3,667 yards passing and 39 TDs, while McKenzie led all 4A receivers with 1,585 yards receiving and 17 TDs. Bunnell threw for 362 yards Saturday to go over 4,000 for the season and 166 of those yards were to McKenzie. Bunnell passed for four TDs with one to McKenzie.

Once again Sky View cashed in on the momentum swing after the defensive stop on fourth down. The Bobcats scored just before halftime on a 4-yard TD run by Truman Moser for a 20-13 advantage at the break.

Hall pounced on a fumble early in the third quarter to get the ball back for the Bobcat offense.

“I came around and it (ball) was there, so I was like, ‘all right I’ll take it,’” Hall said. “They (Panthers) are a great offense. We knew that and knew we had to play our best to win this.”

Like the previous two big defensive plays, the offense used the break to get in the end zone for a 26-13 lead. This time Carlsen took the ball in on his feet from 11 yards out.

Carlsen ended up carrying the ball 35 times for 136 yards and two touchdowns for the game. The Bobcats finished with 369 yards on the ground on 68 attempts and nearly had three rushers hit the century mark. Walter Collins rushed for 102 yards on 20 carries, while Isaac Larsen, a wide receiver, ran the ball six times for 99 yards. Moser picked up 37 yards on six carries and a TD.

“Our line played so well the entire game,” said Carlsen, who also passed for 76 yards on 6 of 12 attempts. “We have so many studs on this team.”

Once again the Panther offense was driving after the Bobcat score. Pine View reached the Sky View 13 only to suffer a 14-yard loss on a sack by Kimball Jackson, who finished with two tackles for loss and seven total stops. Following the sack, Saxton came up with an INT and returned it 36 yards.

“Isaac (Larsen) set me up great by jamming the receiver,” Saxton said. “Toph said I would get one this weekend, and it was great. It was awesome.”

However, unlike the previous defensive plays that were turned into points by the Bobcats, this time it flipped. Sky View had a punt blocked, and Pine View would score on three straight possessions to get within six points.

Between two of those scores, the Bobcats got a 2-yard TD run from Carlsen and a 67-yard scamper to paydirt from Larsen.

The Panthers had the ball with 3:10 to play after recovering a Sky View fumble — the lone turnover of the game by the defending champs. But Pine View only had it for one play because Dee Wilde recovered a fumble at midfield to thwart the Panthers’ last possession.

“Every single play the momentum seemed to be flipped,” Carlsen said. “It was just wild and in the end we found a way to win.”

“They (Panthers) are really good,” Collins said. “It was just back and forth the whole game.”

The game even had an extra play as a penalty was called when time expired. Sky View simply had to kneel and then celebrate its second straight title.

So many different Bobcats made plays when needed. From Carlsen to Saxton to Larsen to Collins to Lewis to Cole Watterson, who broke up two passes. The list could go on and on.

“That’s kind of been the story of this team,” Howell said. “We have a lot of different weapons and the ability to spread the ball around. In the end, it starts up front with our ability to block and protect the quarterback and get stops on defense. It all starts with our guys up front. This is just a really well-rounded team that’s able to win in a lot of different ways.”

Any coach will say it takes all three phases of the game to win a state title. True, but the defense certainly came up big when it needed to Saturday.