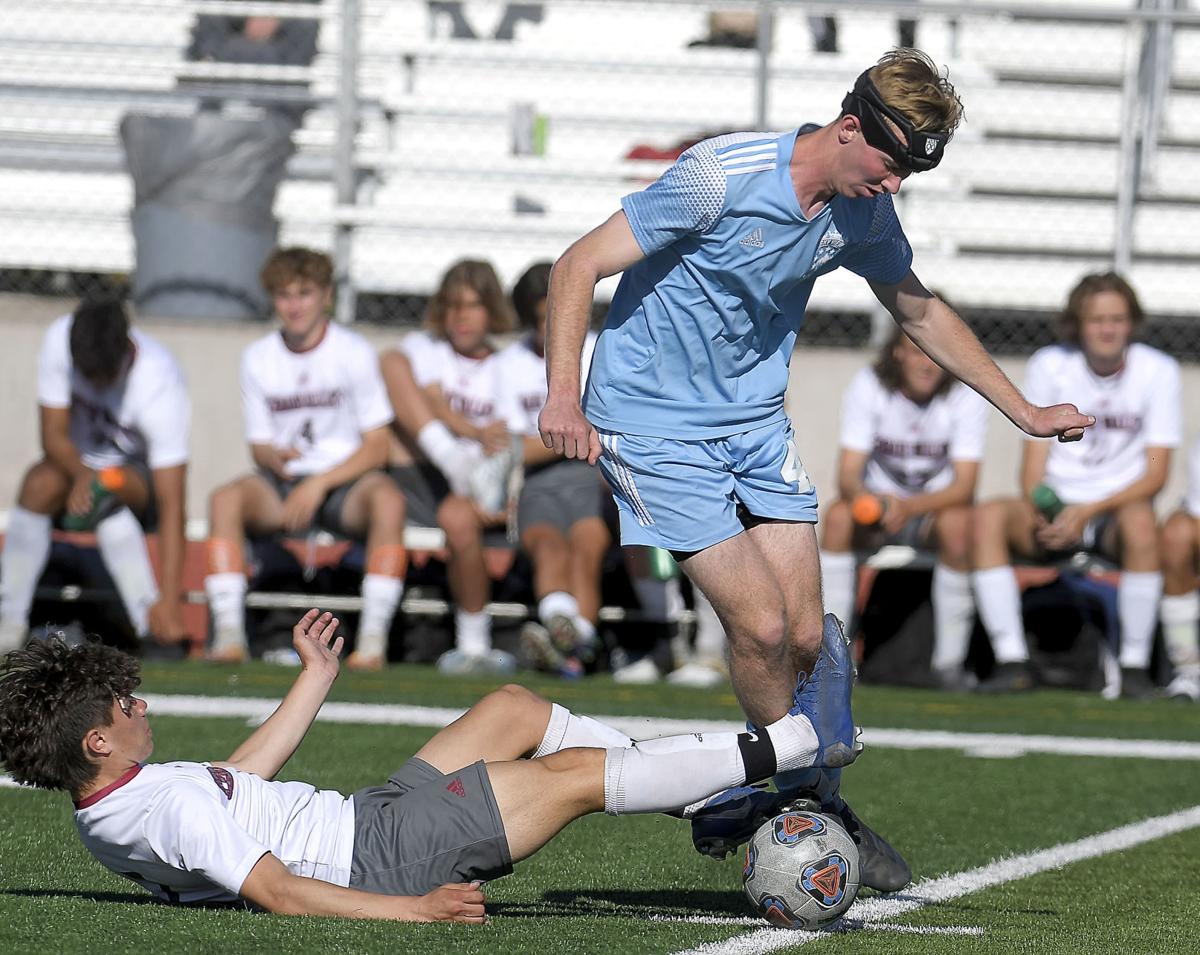 Sky View’s Kasen Erickson brings the ball down the field as Cedar Valley’s Aaron Arenas defends on Wednesday in Smithfield. The Bobcats advanced in the state tournament with a 4-1 win. 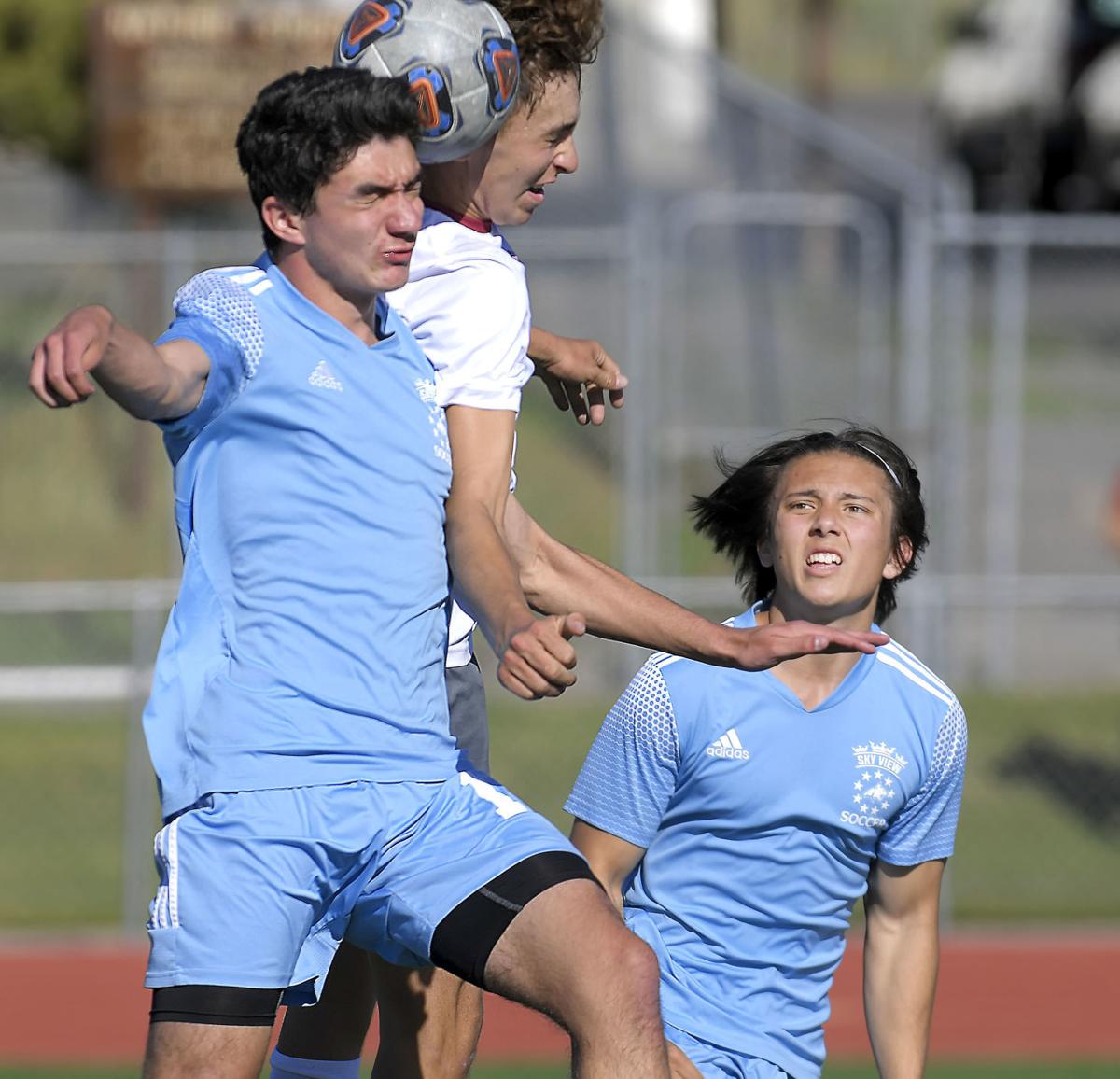 Sky View’s Kasen Erickson brings the ball down the field as Cedar Valley’s Aaron Arenas defends on Wednesday in Smithfield. The Bobcats advanced in the state tournament with a 4-1 win.

SMITHFIELD — The final home match of the 2021 season was a memorable one for the Bobcats and, just like their 4A state championship side from two seasons ago, there’s no question they are peaking at the right time.

Four different players found the back of the net for Sky View, which coasted past Cedar Valley 4-1 and into the quarterfinals of the 4A Boys Soccer Championships on a picture perfect Wednesday afternoon. The Bobcats extended their winning streak to five and have outscored the opposition by a 16-2 margin during that stretch.

The Bobcats were one of four Cache Valley teams that advanced as they will be joined in the round of eight by Green Canyon, Mountain Crest and Ridgeline.

It didn’t take the Bobcats long to impose their will on the 12th-seeded Aviators (6-9) as Carson Soto had two legitimate scoring opportunities in the first four minutes of the game — the second of which was a rocket off the crossbar. Soto wouldn’t be denied in the 12th minute, though.

The senior intercepted a pass just outside the Cedar Valley 18-yard box and executed a give-and-go with Cole Thedell. Soto’s initial shot was turned aside, but he was there to bury the rebound.

Sky View struck again less than two minutes later on a lovely 25-or-so-yard strike by Kai Schwartz. The Bobcats extended their lead to 3-nil late in the opening half when Cole Guymon collected a pass from Brittain Baird and scored from about eight yards out.

The Bobcats fired off 15 shots in the first 40 minutes of action and didn’t allow the visitors to take any shots. Sky View veteran outside back Davis Hall was tasked with marking up on Cedar Valley leading scorer Tyson Carter and did an outstanding job.

“Definitely you can see the experience with Davis,” SV head coach Jorge Cruz said. “He had an amazing game and he’s been solid not just today, but the entire season. One thing about this team is we are very solid in the back. Like everyone, we do make mistakes, but if we don’t make mistakes there’s no room for us to improve. And we need to improve, we need to get better game by game.”

The Aviators did play better in the second half and actually pulled a goal back four minutes after halftime on a shot inside the 18 by Elijah Holman. Thedell had two golden scoring chances to extend the Bobcats’ lead before Holman’s nice finish to the far post.

Sky View was able to slam the door with 11 minutes remaining on a world class strike by Jakobi Dursteler, who was credited with an assist on Schwartz’s tally. Isaac Larson laid a pass back to the former Preston High star, who finished top shelf from about 30 yards out.

“It feels amazing to score a goal like that, but I wouldn’t have done it without my teammates, so it was a great lay-off and I’m glad we already had three (other goals) by the time I scored,” Dursteler said.

Cruz, whose team went 6-1 on its home pitch this spring, made it a point to thank the Bobcat fans for their support.

“You see the bleachers over here, we have tons of support and I just cannot be more happy than to be coaching for this community,” he said.

Up next for Green Canyon is another showdown with Mountain Crest. The two teams split the regular season series.

The Mustangs (11-6) jumped out to a 3-0 lead in the first half over the Thunder (10-7), but had to ultimately regroup in a wild match. Davin Ritchie headed in an Oliver Thompson throw-in for the golden goal.

Eli Clark scored twice for Mountain Crest, which got two assists from Thompson, goals from Conner Leishman and Jaxon Maughan, and assists from Gabe Newman and Maughan. Maughan buried a penalty kick.

“Desert Hills is a really good team,” MC head coach Justin Beus said. “They came out strong in the second half and put us on our heels, but I’m proud of these boys. They played with a lot of heart tonight and finished strong.”

Ridgeline (10-7) did an excellent job of regrouping after Crimson Cliffs (12-6) forced overtime on a goal with 46 seconds remaining in regulation. Karim Salome scored for the Riverhawks in the 72nd minute.

Ridgeline goalkeeper Riley Garvert turned aside three of the Mustangs’ five shots from the penalty spot in the shootout, although the host were allowed to re-take one of them. Tate Godfrey, who was denied on a shot from point-blank range in the first half, netted the game-winning PK for the Riverhawks.

“We seemed to manage the possession and attack well,” RHS head coach Dale Buchanan said. “Crimson Cliffs had a pacey attacking style that we’ve seen in several other teams we have played this season.”

The Riverhawks will square off against No. 3 Dixie (13-3) in the quarterfinals.

Juan Diego (15-2) scored three times in the second half to pull away from Logan (5-12). Heber Prieto, Adrian Espinoza and Andy Martinez all came close to scoring for the Grizzlies, head coach Natalie Norris said.

“We played extremely well first half and got two unlucky goals scored on us, and then we just couldn’t quite get it together in the second (half),” Norris said. “And three of their goals came because they were literally a foot or more taller than us and could jump.”