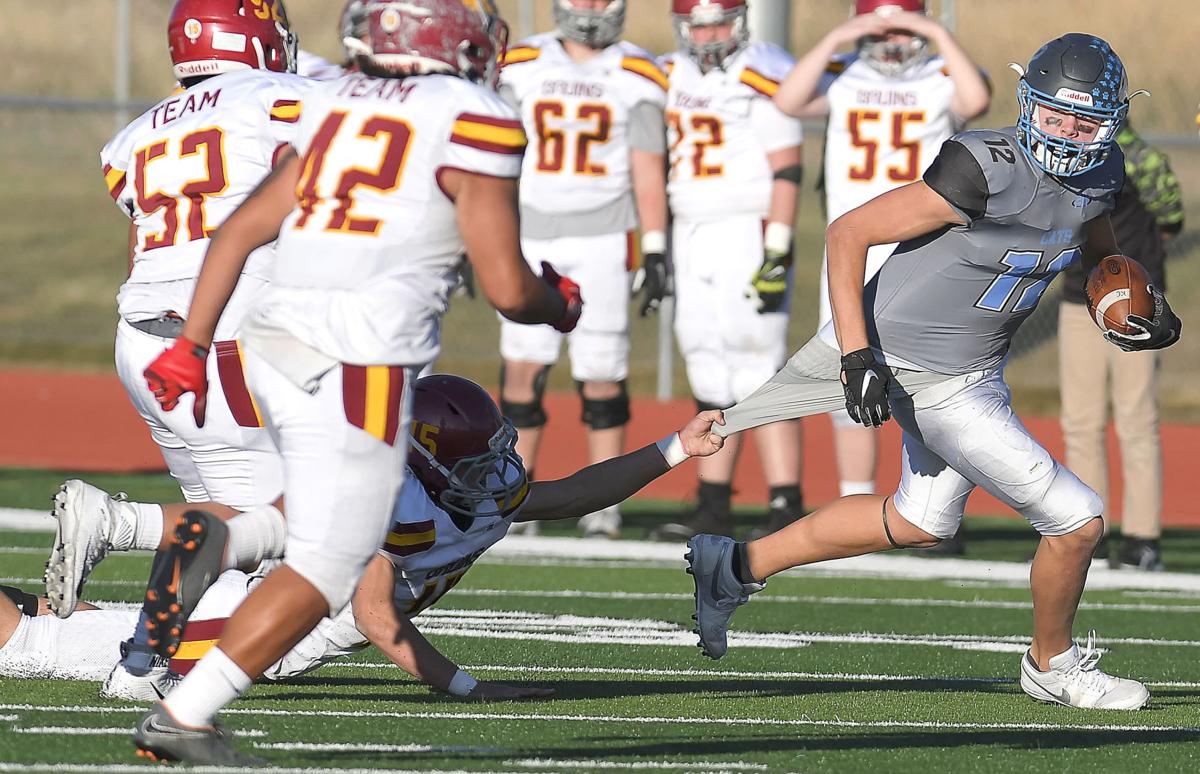 Mountain View’s Radi Stafford holds on trying to tackle Sky View’s Mason Falslev during a game earlier this season. The Bobcats play for their first state title in football on Friday. 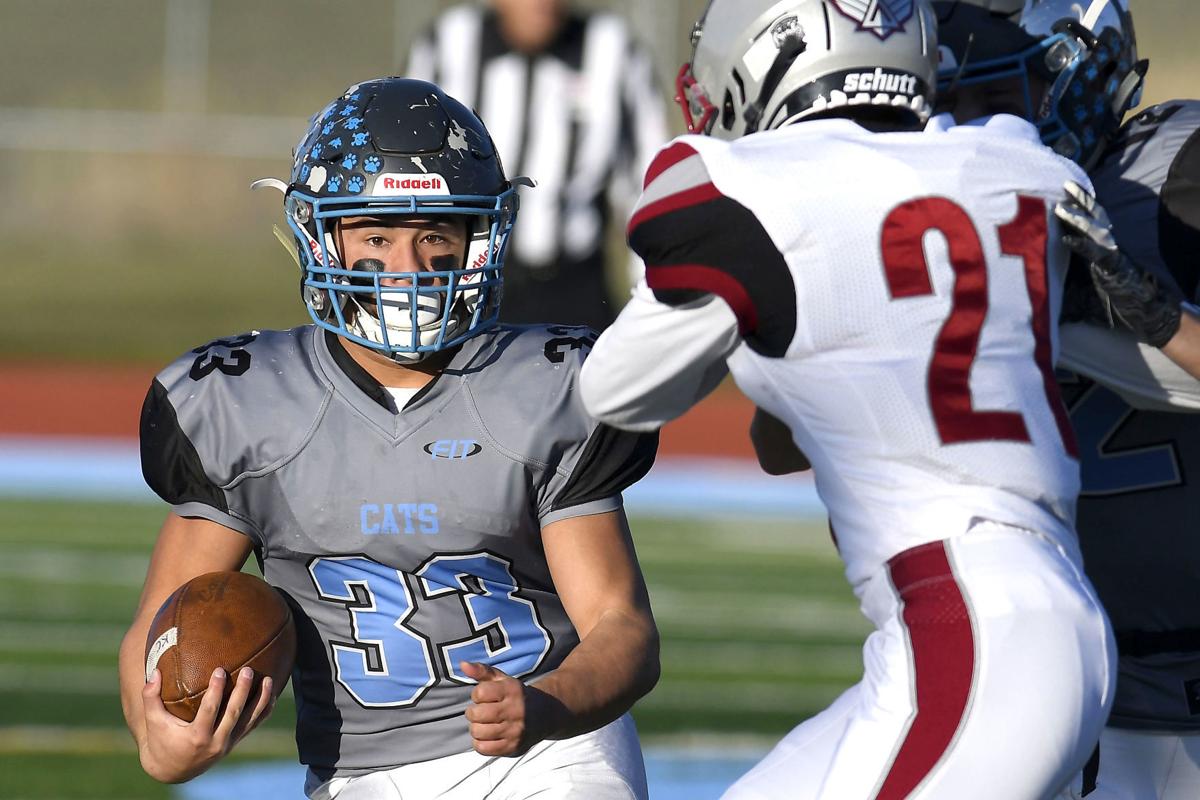 Sky View running back Walter Collins carries the ball against Cedar Valley during a game earlier this season.

Mountain View’s Radi Stafford holds on trying to tackle Sky View’s Mason Falslev during a game earlier this season. The Bobcats play for their first state title in football on Friday.

Sky View running back Walter Collins carries the ball against Cedar Valley during a game earlier this season.

On Friday, Park City and Sky View will look to become the 75th team to join those historic ranks.

No doubt remains as to who the top two teams in 4A are, as the top to seeds in the 4A State Football Championships, Park City and Sky View, glided through the competition to face each other in the ultimate game of the high school football season. Both sides are on double-digit win streaks — Park City at 13, Sky View at 11.

Recent history has been kind to both Sky View and Park City, but neither school owns a state title in football. Park City is 0-5 in championship games, it’s last loss coming in 2001. Sky View lost its only championship game appearance to Mountain Crest in 1987, in the most-attended game in Utah high school history.

Fourth-year head coach Jash Montzingo has turned a low-level program at worst and mediocre at best — 14 wins in four years prior to his arrival — into a 4A powerhouse. Last year, Montzingo took the Miners as far as the 4A semifinals, beating Sky View along the way. This year, Park City set a school record for season wins, surpassing the 11 victories in 2001 and 2009.

For Park City, that win over Sky View in the playoffs last year helped signal a turned corner in the program, but for the Bobcats it was a moment of shame, a disappointing failure to reach their full potential. During the whole 2018 regular season, Sky View didn’t lose a single game, posting a perfect 9-0 record plus a playoff win to enter the quarterfinals on a 10-game win streak. But an offense that averaged 39.2 points prior to that matchup with the Miners, managed just 14 in a 15-14 loss.

Sky View is looking to capitalize on a dazzling three-year run that has seen the Bobcats go 33-3 with its only losses since the start of the 2017 season. Christopher Howell leads the squad as its first-year head coach.

Both sides are used to easy victories, being tied at the top of 4A in average margin of victory, winning games by nearly four touchdowns per outing (27.5 points). Even in the playoffs, Sky View has shown no signs of easing up on its unfortunate opponents. The Bobcats have won their postseason contests by an average of 44.3 points — fourth-highest in state history.

High-powered offense fuels both of these teams. Both teams have scored more than 500 points this season, amounting to per game scoring averages of 39.2 for the Bobcats and 38.8 for the Miners. These offenses should give confidence to the two sides that history won’t repeat itself as in the six combined title game appearances, neither Sky View or Park City have scored more than a touchdown in any of them.

Powering the Park City attack is senior running back Dylan Bauer. He leads one of the more potent rushing attacks that has the Miners averaging 288 yards per game on the ground. Each of the team’s top three rushers averages north of 7.5 yards per carry. Bauer leads the bunch with 1,881 yards this season on 237 carries (7.9 yards per attempt) and 20 rushing touchdowns.

The Miners aren’t too much of a throwing team, sensible given their success on the ground, but when taking to the air, wide receiver Mark McCurdy has been a electric, game-changing threat for the team. On just 32 receptions this season, the senior has 969 yards (30.3 per reception) with 14 touchdowns, including a 93-yard catch and score.

Sky View brings plenty to the table as well on offense. At the helm is quarterback Kason Carlsen, a junior who took over the reins at QB for Mason Falslev in September after Falslev, a two-sport star, had a close call with a potentially season-ending injury. The decision by Howell to go with Carlsen was a stroke of genius. Carlsen has thrived in the role and opened up Falslev’s potential as a receiver, the position he played when he won All-Valley Newcomer of the Year award in 2017 as a sophomore.

In 10 games at QB, Carlsen has thrown for 1,870 yards, 28 touchdowns and just four interceptions. Carlsen has also torn up defenses on the ground with 471 yards and 11 touchdowns to his name when he tucks and runs. Falslev, since his return to WR early in the season, has 26 catches for 543 yards and 11 touchdowns. He’s also the second-leading rusher on the team with 97 carries for 571 yards. Running back Walter Collins leads the diverse group of Bobcat rushers with 110 carries for 591 yards and six touchdowns.

Though offense dominates the headlines with these teams, the defensive force both of these teams have cannot be ignored. Sky View has shut out five opponents this year, holding teams this year to an average of just 11.6 points this season. Park City one-ups the Bobcats in that regard, holding its foes to a mere 11.2 points per contest.

Defensive stars could shine even brighter in a game with such offensive talent. Sky View’s leading tackler, Hunter Lewis and front seven stalwarts Kason Flaherty (49 tackles, 7.0 sacks) and Hunter Smith (34 tackles, 7.0 sacks) will be looked to in stopping Park City on the ground. Scout Morris, who has nine interceptions on the year, could be a game-changing catalyst if he adds to that total.

Park City will be able to rely on plenty of its own defensive stars. Chase Johansen currently has 140 tackles to his name and 13.0 tackles for loss. Carver Rodman has less than half that total at 67, but has 19.0 tackles for loss to go with a team-leading 6.0 sacks which is tied with Johansen.

In a world where blowouts are common, even in championship games, these two teams could provide fans with an exciting, back-and-forth contest worthy of the history books. The Miners will try to stake their claim as one of the best teams ever in 4A by joining the ranks of histories undefeated teams. They’re 13 games in, but 59 other teams in Utah high school history have had their perfect marks spoiled in the championship game. Sky View will try and force number 60.