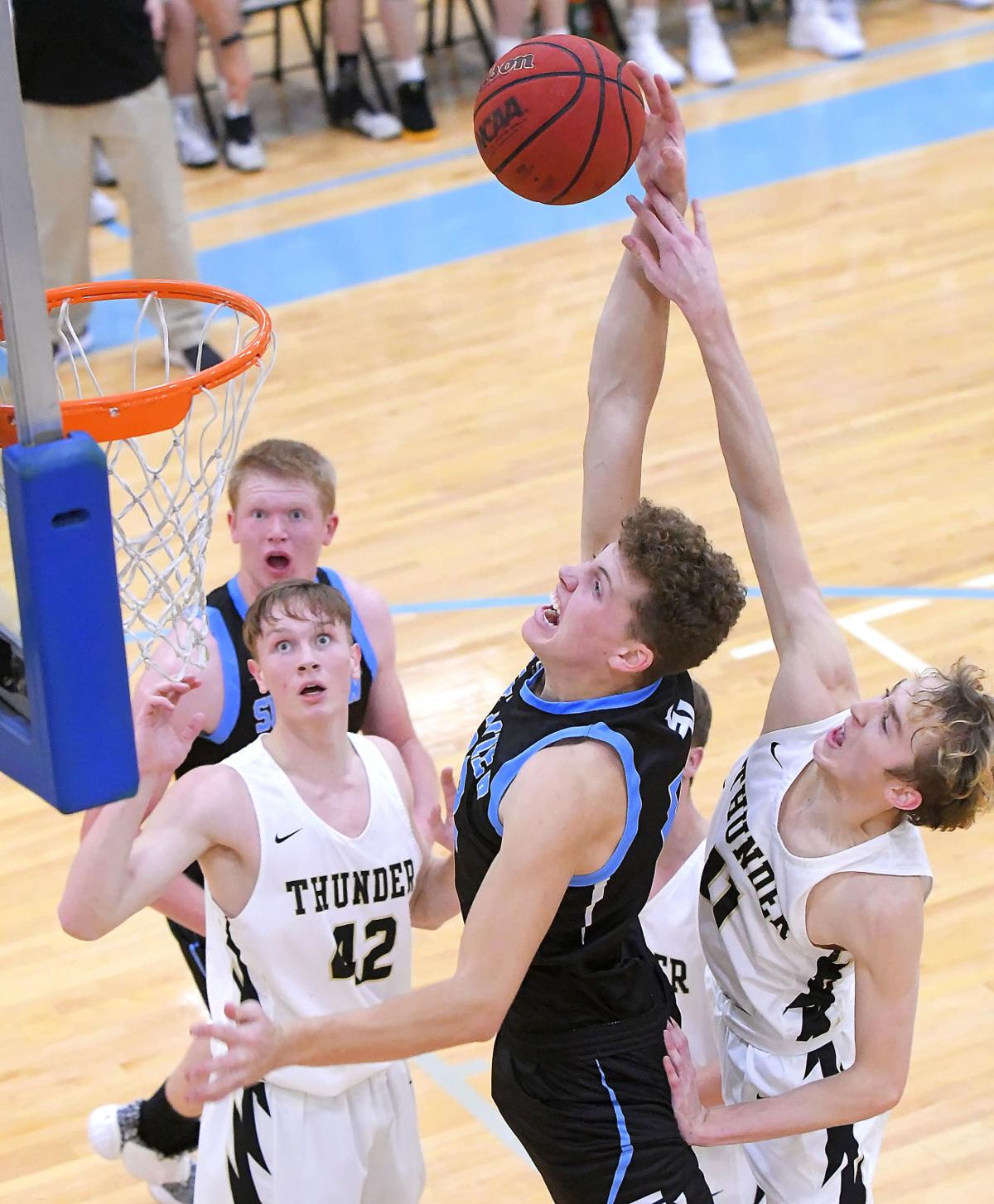 Sky View’s Mason Falslev gets hit on the arm by Desert Hills’ Mason Chase as he tries to dunk the ball on Friday in Smithfield. To view more photos from the tournament, go to hjnews.com. 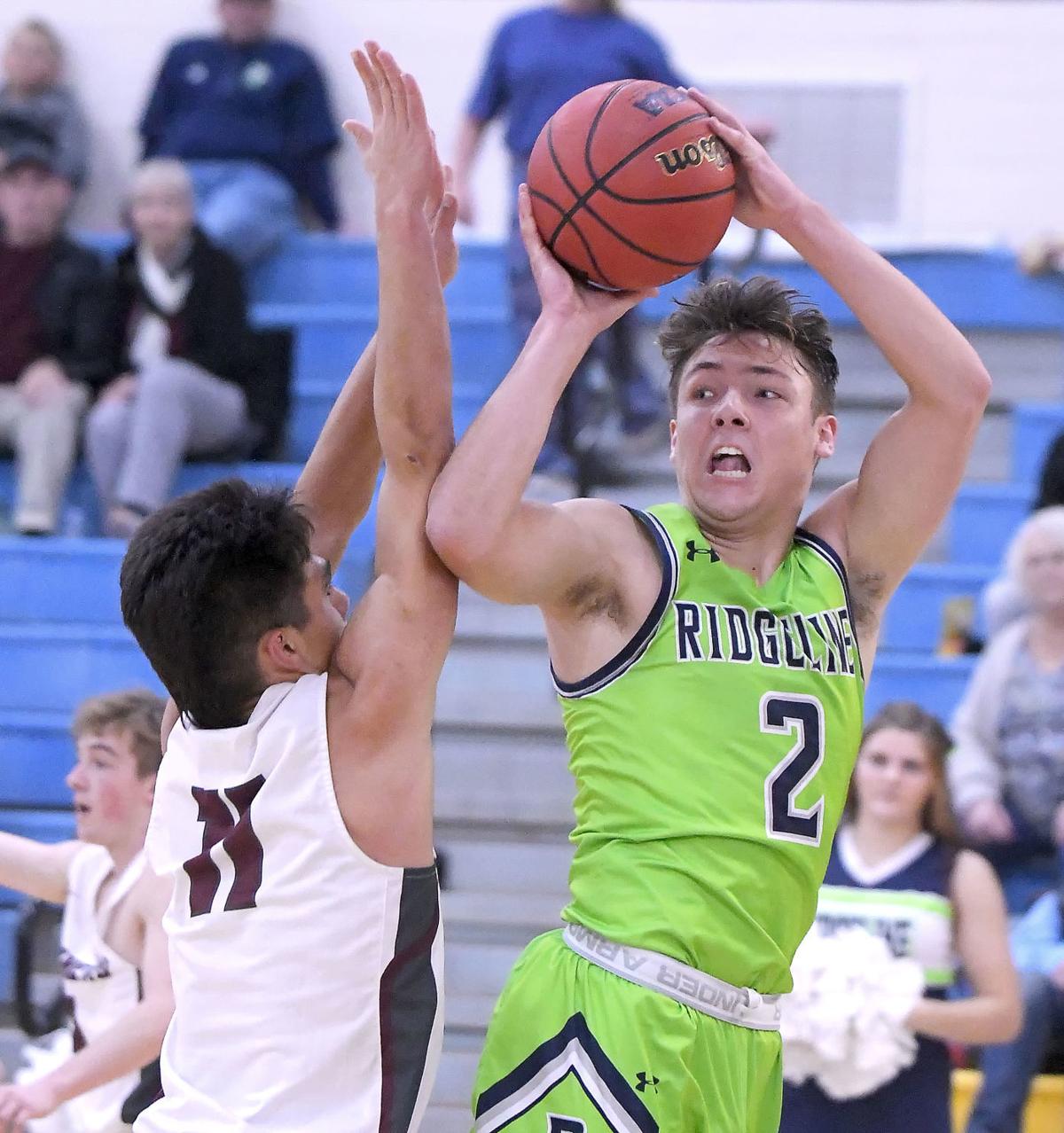 Sky View’s Mason Falslev gets hit on the arm by Desert Hills’ Mason Chase as he tries to dunk the ball on Friday in Smithfield. To view more photos from the tournament, go to hjnews.com.

SMITHFIELD — On the second day of the North vs. South Tournament, hosted by Sky View High School, the Cache Valley, or north, schools ended the night with one win and one loss.

Sky View won its contest, with Ridgeline losing its matchup.

Ridgeline opened the night with a near-thrilling win over Pine View. Despite the Panthers holding the lead for all but one minute and 15 second of the game, the Riverhawks had a chance at a walk-off buzzer-beater. Unfortunately for RHS, Kyler Hansen’s contested 24-foot triple from the left wing clanked around the rim and out, giving Pine View a 61-59 win.

That the Riverhawks got the chance to take such a meaningful shot amounted to little short of a minor miracle. Pine View, the defending Region 9 champs, were up by as much as 15 in the third quarter, outscoring the Millville boys 12-2 in the first five minutes of the third quarter.

“(Pine View) made some adjustments,” RHS head coach Kyle Day said. “We had a really good gameplan for their guys. They have a lot of talented guys. They started doing ball screen stuff we hadn’t seen. So that got us out of it a little bit.”

Day also said the “biggest factor” just came down to the fact that Pine View “is a great basketball team.”

Those terrible five minutes were reversed into three near-perfect minutes thanks to a 10-0 response run by Ridgeline. Over the last 2:46, Ridgeline went a perfect 4 of 4 on field goals, including 2 for 2 on 3-pointers. Conversely, the Panthers were 0 for 4 with. Overall in the fourth quarter and especially in the last two minutes, Ridgeline outplayed Pine View to a considerable degree.

“The boys really fought to earn an opportunity to win the game,” Day said.

And yet, the Panthers were bailed out thanks to the oldest method: The one-man show.

Jared Sudweeks, the 2018-19 Region 9 MVP, scored eight of his game-leading 18 points in the final seven minutes of the game. He back-to-back 3-pointers with two-and-a-half minutes remaining, leaving Day with nothing to do but throw his hands in the air.

The loss dropped Ridgeline to 0-3 in Day’s first season as a head coach. All three of those games were this week.

Sky View, for the second straight night, won by a single points, topping Desert Hills 56-55. The Bobcats (4-0) owned a 56-50 lead with 18 seconds that had even SV head coach Kirk Hillyard relaxing a bit. His boys allowed five points in those final 18 seconds, but did plenty to ensure they would come away with victory on their home court.

At halftime, victory was much less assured as the Bobcats were down 29-22 to the visiting Thunder. Recent University of Utah signee, Mason Falslev, had three first-half fouls, limiting his on-court time and his points total. Falslev scored just five points in the opening two quarters. Sky View’s other star player, Sam Phipps, also got into foul trouble.

In the absence of its name-brand players, Sky View turned to guys like Bracken Schumann. The 6-foot-7 big led SV in scoring in the first half with six points, and ended the game behind only Falslev on the team with 12. Schumann also brought it under the basket on defense, swatting three shots and affecting plenty others.

“He’s a big guy, I would hate to have to play against him,” Hillyard said of Schumann. “He’s a bruiser out there and he’s doing a really good job being, physical, rebounding, blocking shots. He’s getting two or three blocked shots a game. He’s finishing well around the basket. He’s a beast.”

Though largely absent from the first half, Falslev made an immediate impact in the second. On the very first play of the third quarter, Hillyard got his star guard involved, running an off-ball set for Falslev that got him an open corner 3, which he promptly drained. Falslev had his fingerprints on each of Sky View’s first four baskets, scoring two and assisting on the others.

“That’s what good players do is come back and make your teammates better, and that’s what I felt like he did,” Hillyard said. “Happy for that, played through adversity and other guys stepped up, did a good job.”

Sky View wound up outscoring Desert Hills 15-7 in the third quarter, which largely accounted for the eventual win — that and outpacing the Thunder 19-14 in the fourth, excluding the ultimately futile five-point spurt from Desert Hills in the final 20 seconds.

With the win, the Bobcats were the de facto champions of the tourney, going 2-0, with Desert Hills and Pine View going 1-1 and Ridgeline losing both of its games.

West Side opened its season with a 60-51 win at home over Grace. The Pirates jumped out to a 27-13 lead at the half and played even better offensively in the final two quarters.

“Thought the kids played hard for their first game,” WS head coach Tyler Brown said. “We fouled too much, but that’s OK for a first game.”

Logan fell behind early against defending Idaho 3A state champion Sugar-Salem and never recovered. The Diggers raced out to a commanding 17-point lead at halftime en route to a 59-41 road victory.

Jadin Penigar finished with 18 points for the Grizzlies, while Isaac Larsen and Ethan Davis contributed with eight each.

A competitive game got away from Mountain Crest in the second half. Spanish Fork outscored the Mustangs 30-12 in the second stanza and rolled to a 61-37 win on the road.

Sky View, Ridgeline and Mountain Crest were in action Thursday, with the Bobcats and Riverhawks competing on Day 1 of the Sky View-hosted North-South Tournament.

The Bobcats held off a furious rally by Pine View and prevailed, 65-64, while the Riverhawks’ slow start proved costly in a 62-52 loss to Desert Hills. Meanwhile, the Mustangs struggled in the two middle quarters — they were outscored 37-12 — in their 61-37 setback to Weber at home.

Falslev poured in 29 points and Sam Phipps netted 19 for the Bobcats, who took an 11-point lead into halftime.

“We played a near perfect defensive first half and Pine View caught fire and scored 48 in the second half,” Hillyard said. “Our kids hung tough and made enough plays down the stretch to get the win.”

Kaden Cox led Ridgeline with 15 points, while Chase Hall added 11. Those two players teamed up to knock down five 3-pointers.

“We came out really flat in the first quarter and got down 18-4 against a good Desert Hills team,” Day said. “We scrapped back to give ourselves opportunities the rest of the night, but couldn’t get over the hump.”

Mountain Crest was once again led by Nethercott, who scored 18 points — 13 more than anyone else on the team.