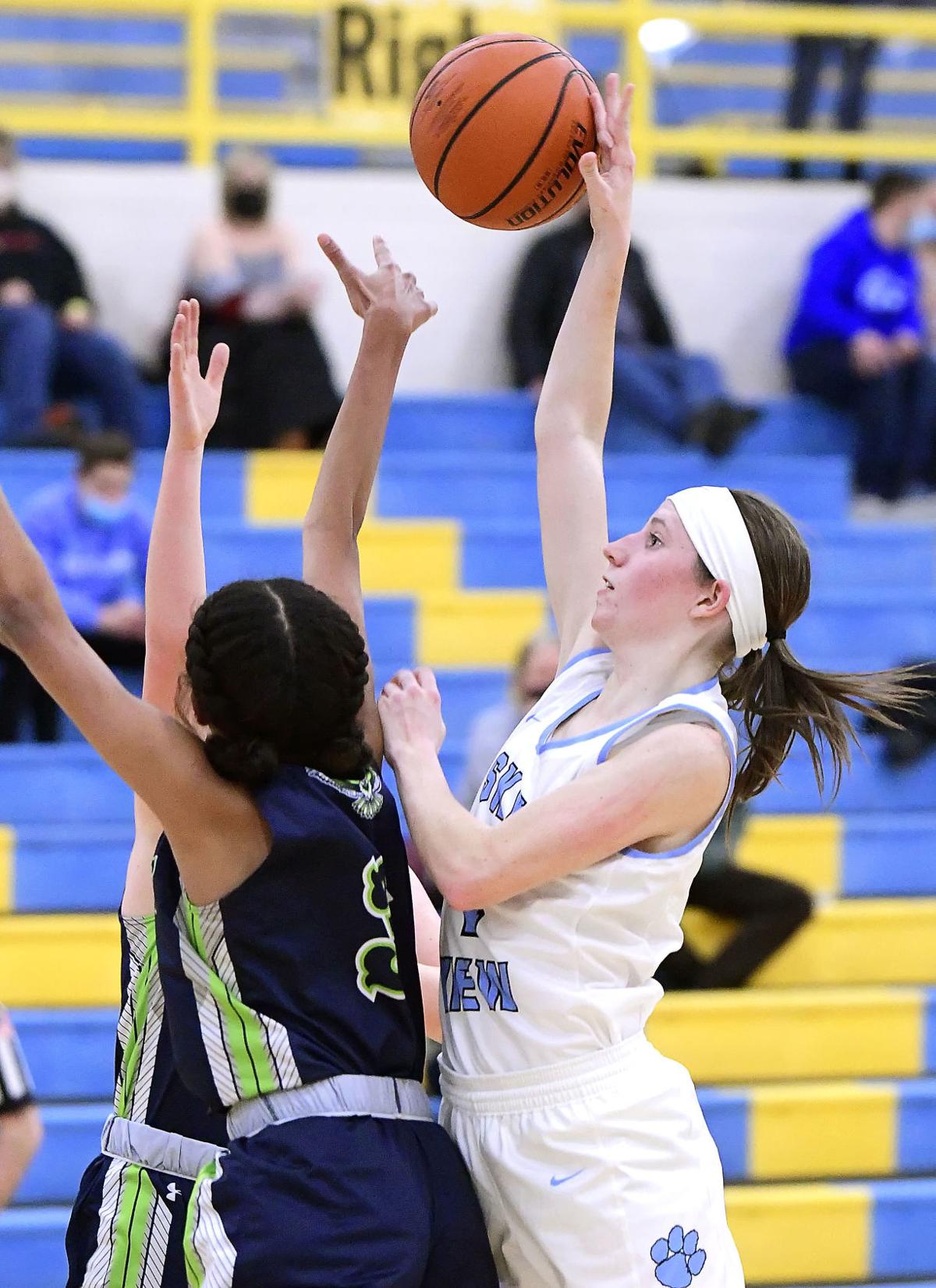 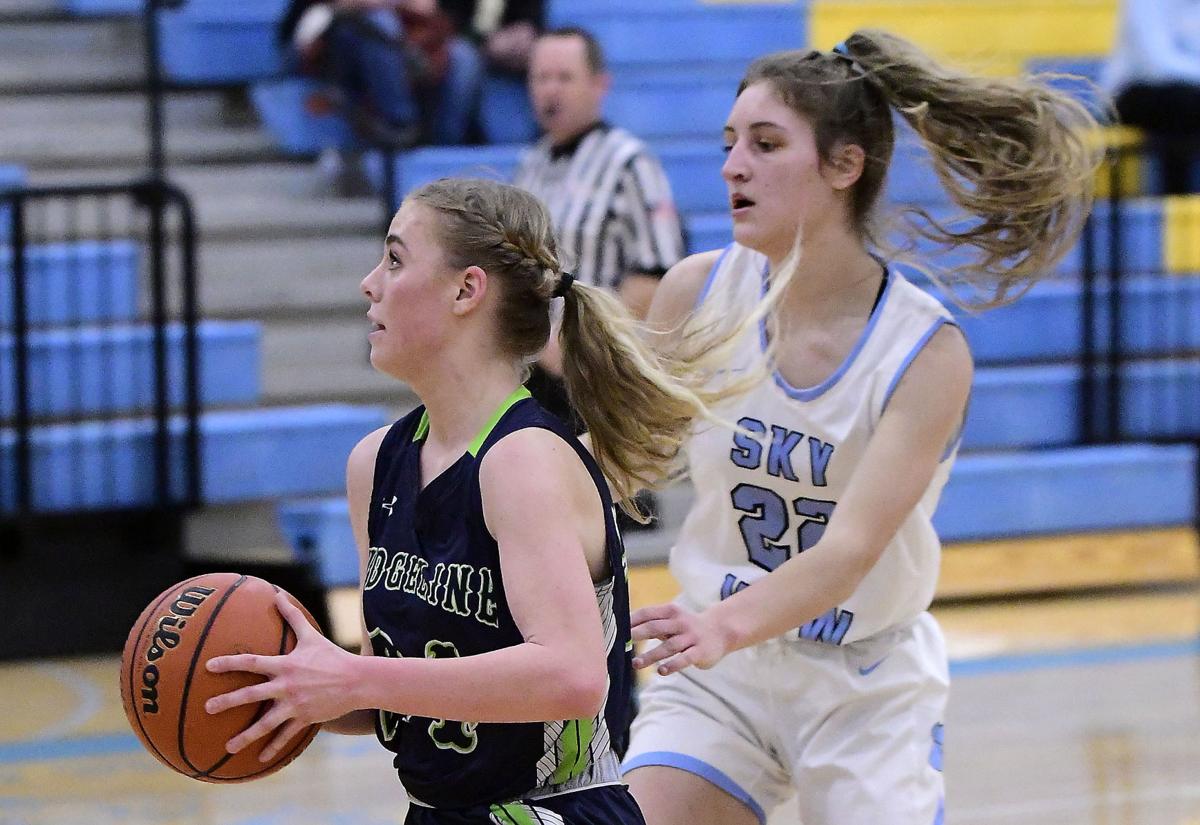 Sky View continued its upward trend of late with a big win at Bobcat Gym against Ridgeline. The Bobcats never trailed in the contest and finished strong to pick up a 48-32 victory. Sky View has knocked off the top two teams in the region this week, creating a really interesting final week coming up as just one game separates the top four schools with two contests to go.

“I love this group of girls,” Bobcat head coach Vanessa Hall said. “We really are pretty balanced and you just never know who is going to step up.”

In other region action Thursday night, Green Canyon did its part to join the logjam at the top with a home win against co-region leader Logan, 55-41. Mountain Crest fell at home to Bear River, 49-38, to drop into a tie with the Bears at the bottom of the standings.

“We talk a lot on defense; we try to communicate and help on help side,” said SV’s Kaytlin Smart, who finished with 10 points, six rebounds, and several blocked shots. “We try to get the energy going, do the little things.”

“Our defense these last two games has been huge,” Hall said. “We have tried to not let them get comfortable. We’ve been working on that a lot, and I thought we did a good job.”

Other than a stretch in the third quarter and to start the fourth, the Riverhawks (13-6, 6-2) never could get any momentum going offensively.

“Credit Sky View’s defense,” Ridgeline head coach Ainsli Jenks said. “One of our struggles was we could just never get in a flow. We couldn’t quite figure out how to get some buckets we usually get. Credit to Sky View for playing great defense and coming out with a lot of energy.”

The Riverhawks, who won the first meeting with the Bobcats 66-60, got within 31-29 early in the fourth quarter. Back-to-back 3-pointers by Haley Anderson and Macie Brown gave Hall some concern as Ridgeline had rallied to win the first game these two played.

“They (Riverhawks) got within two, and it made me a little nervous,” Hall said.

However, this time the Bobcats put their coaches’ concerns to rest. After the six quick points to start the fourth by Ridgeline, Sky View answered with a 12-0 run.

Macy Hellstern converted a three-point play, then turned a Riverhawk turnover into another three for the hosts when she found Addey Merrill open for a 3-pointer. Another turnover turned into a pass from Hellstern to Gracie Rigby for a layup and the lead was up to 10. Hellstern capped the run with a free throw and took a pass from Kaitlyn Hiatt and drilled her only 3-pointer of the game.

“Our girls dug deep and were able to push the lead back up,” Hall said. “... We talk all the time about things are contagious, scoring is contagious, communicating is contagious. The little push opened it back up, and we were a little more comfortable.”

“I thought we were going to turn the corner there when we got within two,” Jenks said. “Basketball is a game of runs. We kind of made ours in the third, finally, and then they answered and we couldn’t get it back.”

The Bobcats finished off the win by making 5 of 6 free throws and having all five seniors on the court to end the game. All five ended up scoring and grabbing at least two rebounds each. Four of them had assists.

“It was nice to be out on the court together at the end,” said Smart, one of the five seniors on the team.

Hellstern led the Bobcats with 13 points, a game-high seven assists and five rebounds. Rigby netted nine points and tied teammate Melanie Hiatt for the team lead in rebounds with seven. All nine Sky View players that got on the court scored.

“This senior group has been great,” Hall said. “They are not only good ball players but good kids. I’m blessed.”

Anderson led the Riverhawks with a game-high 14 points. Sarah Litchford chipped in 10 points, grabbed seven rebounds and dished out three assists. Only four Ridgeline players scored in the game.

“Everything is in front of us, we control our own destiny,” Jenks said. “The most important game is the next one. You flush this one and congrats to Sky View. They played really well.”

Sky View went with its five seniors — Smart, Abbey Cantwell, Rigby, Lily Williams and Kaitlyn Hiatt — to begin the game as three regular starters began the game on the bench. After controlling the tip, Smart drove in for a bucket to start the game. Kaitlyn Hiatt scored in the paint, and Williams made a layup off a pass from Cantwell to give the hosts a 6-0 lead. Williams then controlled an offensive rebound and found Smart for a jumper before Hellstern, Melanie Hiatt and Hannah Radford checked in.

“It was big to get a start like that,” Smart said. “We seniors have been close ever since freshman year. We were just so excited and didn’t care who we were playing. We just wanted to play our hardest and get little Lil (Williams) in there and have her play.”

Six different Bobcats scored in the opening quarter as they took a 14-8 lead into the second quarter.

Ridgeline had a scoring drought of more than five minutes as Sky View built a 20-10 lead. The Riverhawks took a 24-12 lead into the break as Smart had all 10 of her points by halftime.

Litchford had six points in the third for Ridgeline, who got within six at one point. Sky View took a 31-23 lead into the fourth and withstood the two quick treys by the visitors before going on the big run to seal the win.

A few miles south of Smithfield, the home team was enjoying a big win at North Logan. Green Canyon overcame a slow start and finished strong to hand Logan its second loss of the week.

“We are so proud of our team, and the way they played tonight,” GC head coach Alexis Bird said. “It was a complete team effort. They bought into the game plan and executed it so well. Our defense was incredible, and then we were patient on offense and found the open player.”

The Wolves did have a balanced effort as five players had at least eight points and three grabbed at least five rebounds. In the scoring department, Jayden Beach led the way with 11, followed by Maren McKenna (10), Broke Monson (10), McKenna Crane (8) and Landree Spackman (8). Crane and McKenna each had eight rebounds, while Spackmand pulled down five.

The Grizzlies, who won the first meeting with the Wolves 52-38, was led by Alec Kennington with a game-high 12 points. Amber Kartchner netted 10, and Tawnee Tubbs added eight.

Bear River ended an eight-game losing streak in getting its first region win of the season at Hyrum.

The Mustangs had won the first meeting, 63-56. Since then, they have dropped five in a row with Thursday night’s outcome.

“It was an aggressive and physical game,” MC head coach Megan Smith said. “One thing you can always count on with Mountain Crest is we will fight, and we will fight hard until the end.”

Havyn Brown led the Mustangs with 14 points, hitting a trio of 3-pointers. Sadie Coggins joined her in double-digit scoring with 11 points, connecting on a pair of shots from beyond the arc.

The Bears were led by Olivia Taylor with a game-high 18 points.